Phytosociological survey of arboreous species in conserved and desertified areas in the semi-arid region of ParaÃ­ba, Brazil

The objective of this study is to perform a phytosociological survey of the arboreous composition in conserved and desertified areas of the semiarid region of Paraiba State. Twenty-two conserved areas (CA) with native vegetation (Caatinga) where there has been no clear cut logging since 1984, and Twenty-two desertified areas (DA) having a difficult re-establishment of vegetal coverage over the past 10 years were selected. Plots with 100 m2 were established and the species were identified. The perimeter at 0.30 m ground level (PGL) and at breast height, 1.30 m (PBH) was measured. Subsequently, the absolute density (AD), relative density (RD), absolute frequency (AF), relative frequency (RF), absolute dominance (ADo), relative dominance (RDo), importance value index (IVI) and coverage value index (CVI) were calculated. There were 63 species of trees in CA and 9 in DA. The most frequent species were Caesalpinia pyramidalis and Croton sonderianus in CA, and Mimosa tenuiflora and Croton sonderianus in DA. CA showed an AD (4,845 I ha-1) higher than DA (895 I ha-1). The ADo order was C. pyramidalis > Anadenanthera colubrina > Myracrodruon urundeuva in CA, and M. tenuiflora > C. pyramidalis > Aspidosperma pyrifolium in DA. C. sonderianus (CA) and M. tenuiflora (DA) reached the highest IVI and CVI.

The desertification process triggers major changes in the floristic composition of the Caatinga (Sousa et al., 2015). This happens mainly due to anthropic  actions  known  as deforestation for firewood purposes, exploration of clay deposits, and intensive use of the land through in appropriate agricultural mechanisms (cutting and burning), salinization, extensive grazing and overgrazing (Nimer, 1988; Galindo et al., 2008; Alves et al., 2009; Costa et al., 2009; Sá et al., 2010; Aquino and Oliveira, 2012). The adoption of strategies is mandatory to minimize this problem (Damasceno and Souto, 2014; Barros, 2011).
The impact of the anthropic action on the physiological dynamics of vegetation causes its features to change to an even lower and thinner Caatinga, with a severe selection of species (Alves, 2009). In this context, it is clear that the phytosociologycal survey provides information about the geographical distribution of the species and about the vegetation structure, depicting the impact of the anthropic action on the vegetation-soil-climate complex. This data can be used for action planning to preserve, conserve and recover the forest ecosystems (Chaves et al., 2013). This consequently leads to the development of more sustainable activities in the semi-arid areas.
Despite the importance of phytosociological studies, the studies carried out in Brazil are still insufficient, and a thorough analysis is necessary so actions on the conservation of natural resources can be taken (Freitas and Magalhães, 2012).
Considering the importance of the vegetal structure for planning the conservation and recovery of the natural resources and for the mitigation of the consequences of the desertification process, this study aimed to perform a phytosociological survey of tree layers in areas of conservation and desertification in the semi-arid region of Paraíba State. 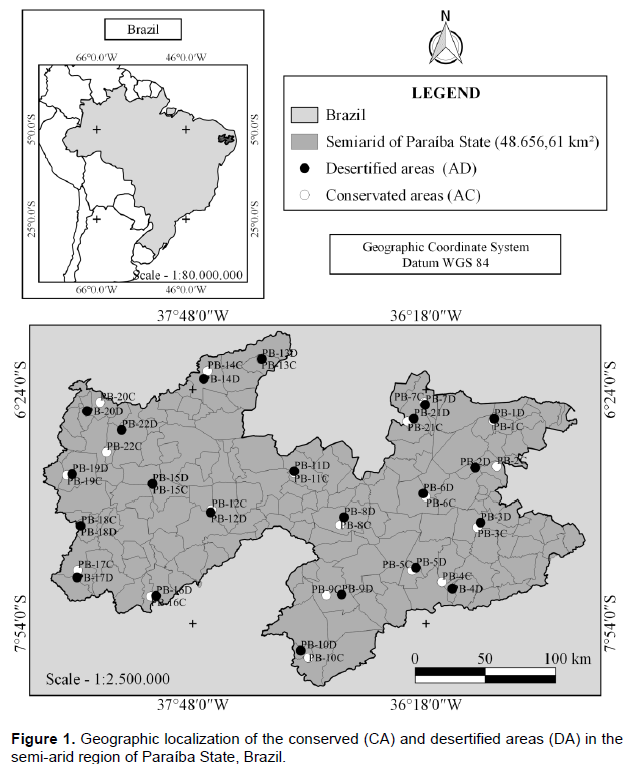 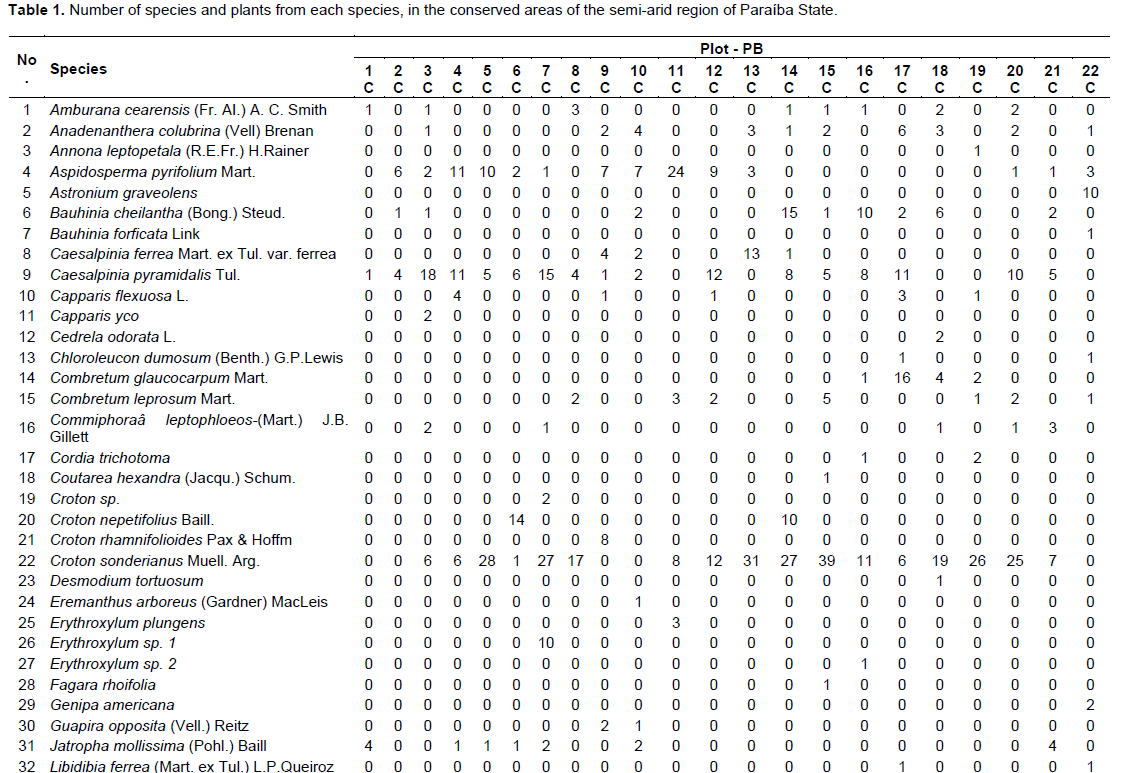 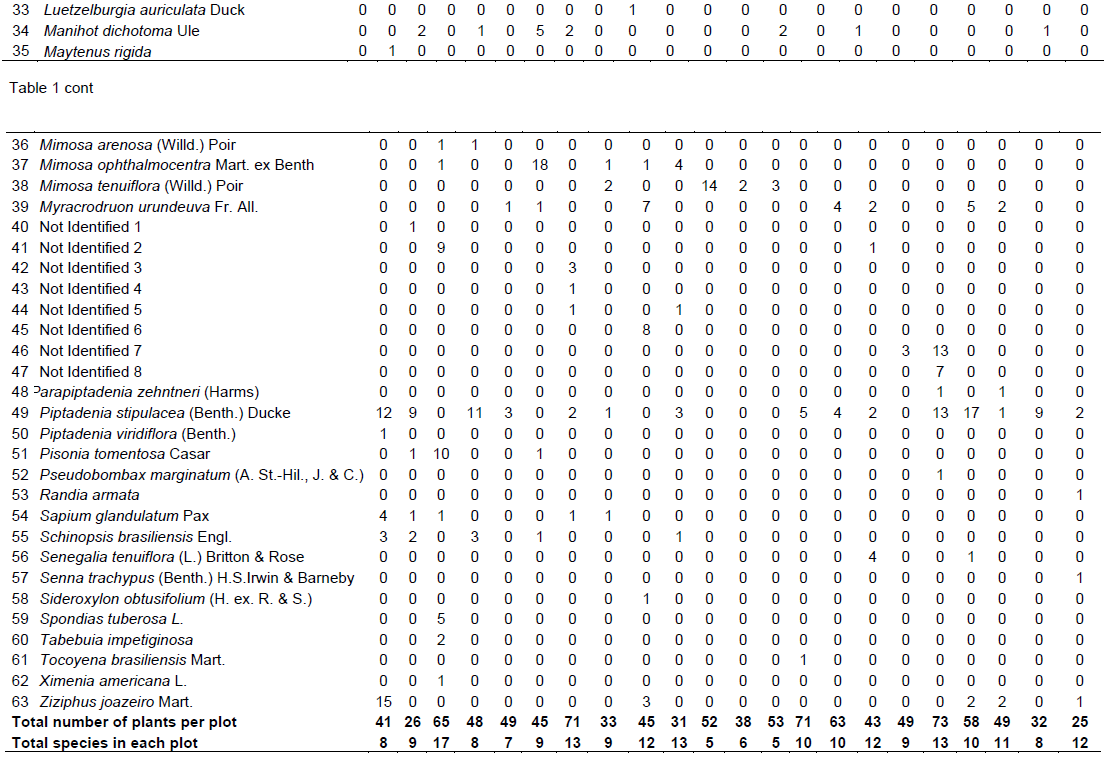 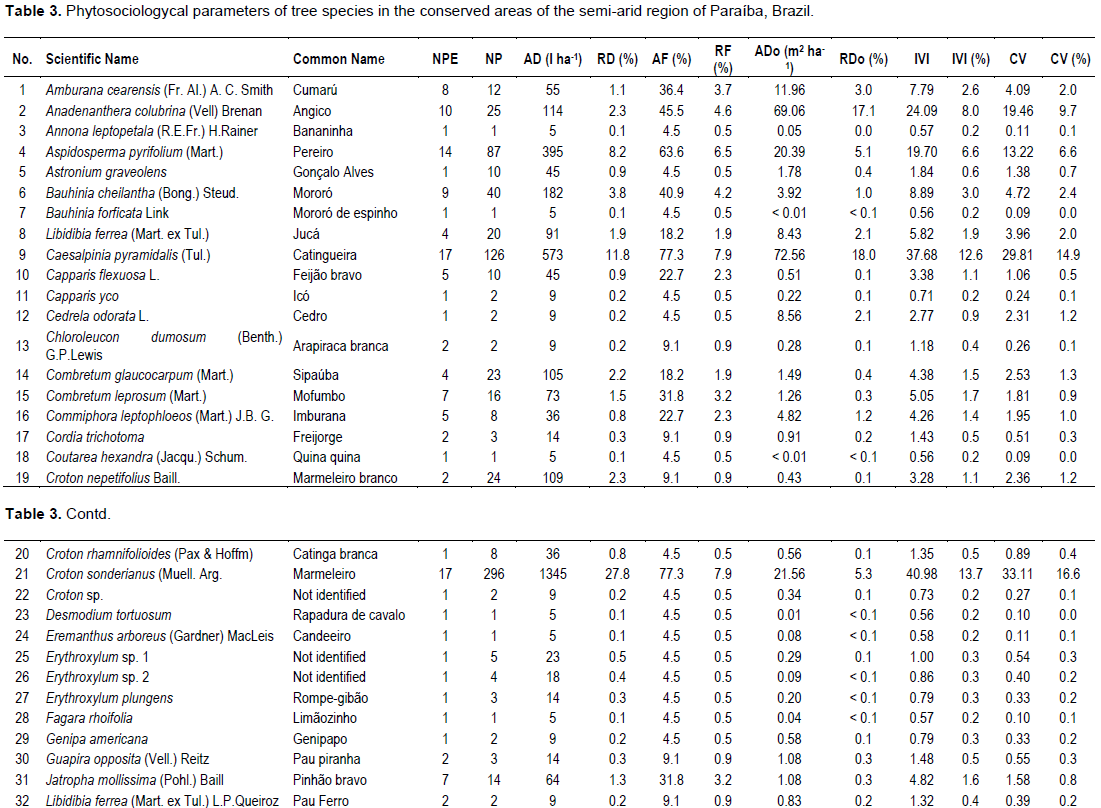 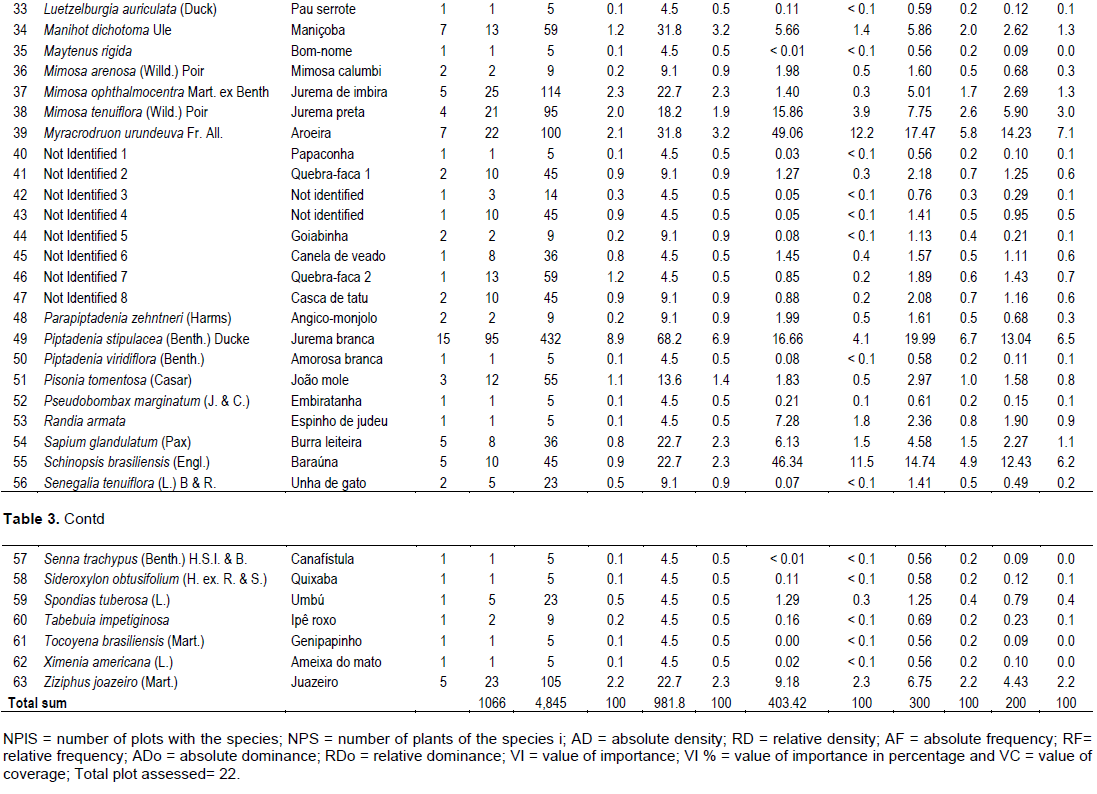 The diversity of species is the main feature that determines the ability of a system to survive during and after a period of adversity, that is, the resilience of the system (Salgado-Laboriau, 1994). In this context, we can say that the present anthropic activities promote the reduction of the arboreous diversity in the desertified areas, lowering, consequently, the environmental quality of the Caatinga biome in the semi-arid region of Paraíba State. This corroborates the work of Costa et al. (2009).
The anthropic action, in addition to reducing the number of species, also affects the distribution of those remaining in the desertified areas, affecting the emergence of those adapted to stricter requirements, such as M. tenuiflora (Lima, 1996), J. molissima, A. pyrifolium and C. pyramidalis (Silva et al., 2004). It is also noted that some characteristics of the former three species reduce the impacts of pressure of use by population and by domestic animals (Souza et al., 2015), showing low density for building and firewood usage, or toxicity to animal consumption (Souza, 2008; Lima and Soto-Blanco, 2010; Dantas et al., 2012).The highest AD in conserved areas suggests a greater protection of the soil against erosion processes, especially by water, decreasing soil and nutrients losses (Martin Filho et al., 2009; Ramos et al., 2014), and consequently increasing the vegetation resilience. The highest density of species in conserved areas also increases the production of litter, levels of organic matter, infiltration capability and storage of water in the soil, thus reducing the susceptibility to water scarcity (Mendonça et al., 2009). The highest values of ADo of the species in CA relate to a number of factors, including the potential of some species, such as M. urundeuva and A. colubrina, which can reach 14 and 15 m in height in the Caatinga (Lorenzi, 1992). Other factors are better conditions for plant growth and development, as previously seen, and time to accumulate biomass, as these areas did not suffer clear cutting for at least 32 years. Although C. pyramidalis reaches only 10 m high, that is, 66% of M. urundeuva’s and A. colubrina’s height, it has characteristics that counterbalance that of the latter in biomass production, such as tolerance to periods of water stress (xerophile) and easy regeneration after cutting (Lorenzi, 2002; Lorenzi, 2009). In the DA, the best-adapted species to the water stress conditions reached the highest values of ADo. The species adapted to these conditions have some advantages in relation to those not adapted, which tend to face greater difficulties to getting established and disseminated. The IVI expresses numerically the importance of a given species amongst the trees of a community (Poggiani et al., 1996). Therefore, the maximum value of 13.7% (C. sonderianus) indicates a better distribution of the IVI amongst the species in the conserved areas, that is, a better balance between the species and, consequently, a higher quality of vegetation. Regarding DA, M. tenuiflora’s IVI of 41.9% points this species out as the most ecologically important for this environment, corroborating data from Freitas et al. (2007). According to this author, M. tenuiflora’s ability to dominate the environment is due to its high capacity to regrow, revealing a good adaptation to the degraded environments of the Caatinga.
The parameter CVI conveys the ecological importance of the species in horizontal distribution terms so that the maximum value of 16.6% (C. sonderianus) also gives evidence of a more balanced importance among the species in the CA than in the DA. As much as the IVI, this parameter reflects the effect of the anthropic action in the Caatinga biome, where the number of arboreous species is low and where there is an environmental imbalance, a more severe water scarcity and the predominance of species more adapted to these desertified conditions.