The bioactivity of three botanical powders in sole and combination against Callosobruchus maculatus (Fab.) was investigated at 29±3°C and relative humidity (R.H.) OF 65+5% in the laboratory. The appropriate mixing ratio of Cymbopogon citratus (C), Alstonia boonei (A) and Hyptis suaveolens  involved seven  combinations viz., C:A, C:H, A:H, C:A:H, H2:C:A, A:C2:H, H:C:A2 in simple ratios 1:1, 1:1, 1:1, 1:1, 2:1:1, 1:2:1 and 1:1:2. The sole and combinations of botanicals were separately prepared and applied at the concentrations of 1.25% per 20 g seeds of two susceptible cowpea lines viz., Oloyin and IT845-2246 in the Kilner jars. Newly emerged ten females and five males C. maculatus were introduced separately into each of the Kilner jars, and replicated four times in a completely randomized design. Data were collected on adult mortality, number of eggs laid, offspring emergence, percentage seed damage, weight loss and seed viability. Results indicated that powder of H. suaveolens evoked significant mortality (100%) after 7 days of treatment. However, lower means were recorded in oviposition and adult bruchid emergence in cowpea seed treated with powders of H. suaveolens and A. boonei. Likewise, powder of C. citratus recorded the least seed damage and this implied that the three tested botanicals were observed to be effective bio-insecticide. The combination H:C:A2 produced most desirable results causing higher adult  mortality (96.33%), low offspring emergence, lower seed damage (0%), higher seed viability (88.00%), and least seed weight loss (0%) and therefore the most bio-active mixing ratio against C. maculatus. There was however interaction and synergism effect among the different combinations.

Cowpea, Vignia unguiculata is important particularly in West Africa with over 9.3 million hectares area and 2.9 million tonnes annual production (Fatokun et al., 2002). Cowpea is grown both as a leaf and pod vegetable in the humid tropics (Steele and Mehorva, 1980). Cowpea seed is important to the income of poor farmers as well as to the nutritional status and diets of people in the tropics (Langyintuo et al., 2003), since animal protein sources are rarely affordable in adequate quantities by majority of the populace in developing countries. Cowpea is a highly nutritive leguminous crop which contains 22% protein, 1.5% fat and 60% carbohydrate (Dolvo et al., 1976), and a valuable source of calcium, iron, thiamine and riboflavin (Ofuya, 2001). Cowpea is a veritable source of dietary protein for the teeming human population and livestock (Murdock et al., 1997), and can serve as a useful complement in diets comprising mainly of roots, tubers or cereals. Similarly, it can be boiled and consumed directly, made into flour, puddings or weaning foods for young children and thus ameliorate malnourishment and wastage (Phillips and Dedeh, 2003). Also, it can be ploughed into soil as green manure or grown as cover crop to improve soil fertility. Cowpea weevil, Callosobruchus maculatus F. (Coleoptera: Bruchidae) is responsible for over 90% of the damage done to cowpea seed (Caswell, 1982); and if left uncontrolled for over six months in storage, 100% loss may be recorded (Singh, 1977; Seck, 1993).
Thus, the damage caused during storage, shipping and transportation, is a very serious problem all over the globe (Upadhyay and Ahmad, 2011). The insect pests not only damage the grain but also depreciate the weight and quality of stored grains (Rayhan, 2014). Beetle damage also causes significant reduction in seed viability because damaged seeds are riddled with holes by adult insects. The fatty acid content of seeds infested by C. maculatus increases, thus caused a slight denaturation of proteins and loss of the important vitamin; thiamine (Southgate, 1978). Heat, moisture and waste products produced by the bruchid result in further deterioration and the growth of molds, which renders cowpea grains unfit for consumption (Shazia et al., 2006). The quality of grains and seeds during storage depends on various factors such as crop or variety, initial seed quality, storage conditions, seed moisture content, insect pests, bacteria and fungi (Amruta et al., 2015). Nowadays, pest control technology is mostly dependent on synthetic insecticides (Azad et al., 2013). However, the quick and effective control of pests with insecticides convinces the farmers easily compared to the non-chemical methods of pest management.
Having a knockdown effect on targets, more often insecticides form the only solution of sudden outbreak of pests. Raupp et al. (2014) reported the residual effect of insecticides on insect pests and natural enemies, while inherent high mammalian toxicity and ecological safety are of great concern to both environmentalists and researchers worldwide (Zacharia, 2011). However, the development of resistance and resurgence has limited the application of single insecticides resorting to tank mixtures. Plant products, such as aqueous or organic solvent extracts are being used in many countries as protectants of stored products (Fernando and Karunaratne, 2012; Rajashekare et al., 2010 and 2012). Several workers have researched the use of single application of botanicals. It would however be germane to examine and determine the combinations of three botanicals in different mixing ratio for the farmer’s use. This however engendered interaction and synergism effect among the different combinations which boosted more protectant ability of the botanicals. The combinations of more than one botanical would sustain optimal agricultural production through the management and control of insect pests of crops and food products.

Plant materials
The three plants species viz., C. citratus (Dc ex Nees) Stapf, Alstonia boonei DeWild and Hyptis suaveolens Poit were sourced from Abeokuta, South West, Nigeria, and were identified at the Department of Forestry and Wildlife, College of Environmental Resources Management, Federal University of Agriculture, Abeokuta, Nigeria. The plant leaves were washed in clean water and were later air-dried in room temperature (25°C) and ground into fine powder using an electric grinder. The powder was further sieved in 100 µm aperture sieve. Ife Brown and IT845-2246 cowpea varieties were obtained from the Institute of Agricultural Research and Training, Ibadan and International Institute for Tropical Agriculture, Ibadan, Nigeria, respectively. The cowpea seeds were disinfested using cold shock treatment at 0 to 4°C for seven days.
Rearing of experimental insects
The initial 200 unsexed adult C. maculatus were obtained from the culture maintained on Ife Brown cowpea variety in the Department of Crop Protection, Federal University of Agriculture, Abeokuta, Nigeria. Fifty adults were introduced into a 500-ml Kilner jar containing 200 g of clean disinfested Ife Brown cowpea seeds, and 4 jars were prepared in this manner. The Kilner jars were covered with muslin cloth held in place by a screw cap in order to allow aeration and to prevent the insects from escaping. The set-up was kept under ambient temperature (27±3°C) and relative humidity (70-85%). The insects were allowed to mate for seven days and lay eggs in each of the jars after which they were removed to avoid multiple oviposition. The devoured seeds were replaced continuously with the same quantity of freshly disinfested seeds. Only the new adult bruchids emerging from the culture were used for the experiment.
Toxicity bioassay
The powders of each of the botanicals, C. citratus (C), A. boonei (A) and H. suaveolens (H) were admixed with 20 g of disinfested cowpea seeds of each variety in a Kilner jar. Similarly, seven combinations viz., C:A, C:H, A:H, C:A:H, H2:C:A, A:C2:H, H:C:A2 in ratios 1:1, 1:1, 1:1, 1:1, 2:1:1, 1:2:1 and 1:1:2 were applied. The plant powders and their combinations were separately prepared and applied at lowest concentrations of 1.25%. Newly emerged ten females and five males of C. maculatus were introduced into each of the Kilner jars. Each treatment was replicated four times, and the control jar contained cowpea seeds admixed with plant powder prepared from Azadiracta indica. All Kilner jars containing the seeds and combined plant powders were arranged on work tables in the laboratory in a completely randomized design. Also, the Kilner jars containing the treated cowpea seeds were covered with a muslin cloth and tied with a rubber band. This aerated the contents and prevented other insects from entering the containers. Records of mortality were taken at 1, 3, 5 and 7 days after treatment. Thus, bruchids that showed no visible movement after 20 s of observation were turned with forceps before considering as dead. After 7th day assessment, all adult bruchids were removed from the Kilner jars and cumulative data on percentage adult bruchid mortality were corrected using Abbott (1925) formula as:

Where, Pt, corrected % mortality; Po, observed % mortality; Pc, control % mortality. That is, when all the bruchids had died after 14 to 21 days, the number of egg laid was counted and recorded. The F1 progeny population was assessed on a daily basis and removed after the Kilner jars were left until 4 weeks post treatment. At the end of the twelve weeks period, the contents of each container were sieved to remove the dust, frass and any insect present in the cowpea seeds. The number of undamaged seeds was counted to assess damage to the cowpea seeds by the bruchids. The cowpea seeds were re-weighed and the percentage loss in weight was computed, thus:

Where, Wi is the initial weight and Wf is the final weight. The quality of the cowpea seeds was also tested through viability test. Thus, the viability of the treated seeds was tested in Petri dishes (9 cm diameter) lined with moist filter paper. Twenty cowpea seeds were randomly selected from every treatment, watered for 48 h in the Petri-dishes until the end of experiment that is 96 h. The percentage of the germinated seeds per treatment gave an indication of the relative viability of the seeds.
Statistical analysis
All data collected were subjected to analysis of variance using SAS (2002). Significant means were separated using Student’s Newman-Keuls tests α = 0.05. 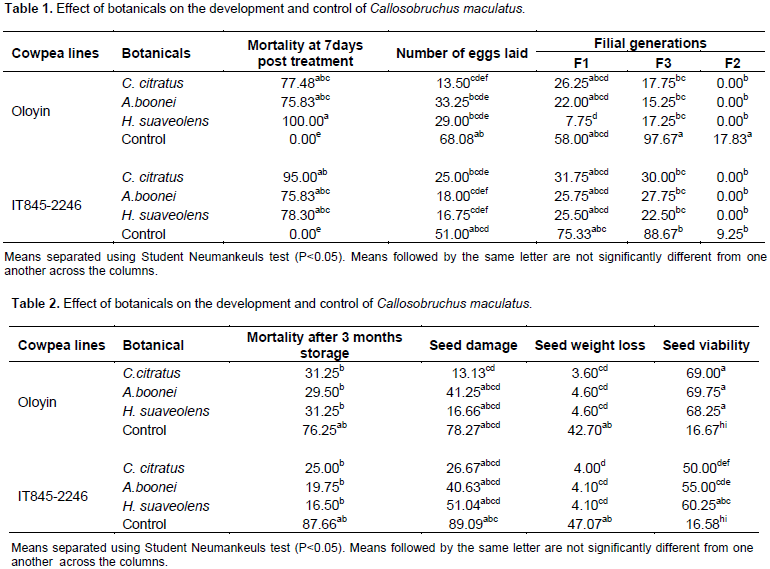 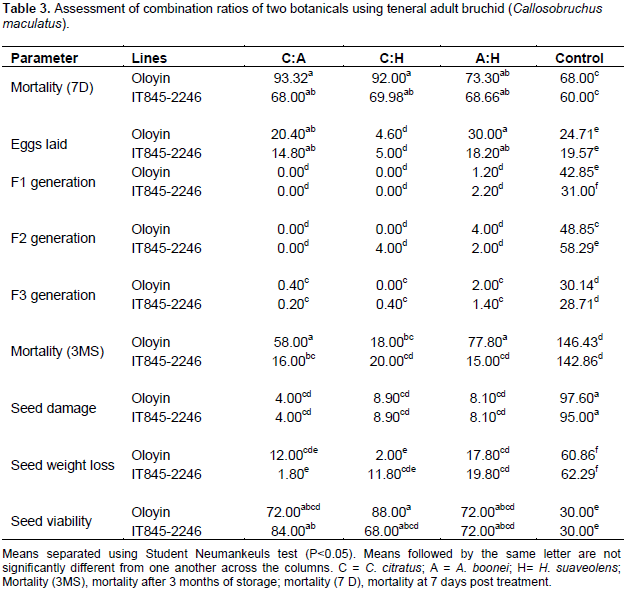 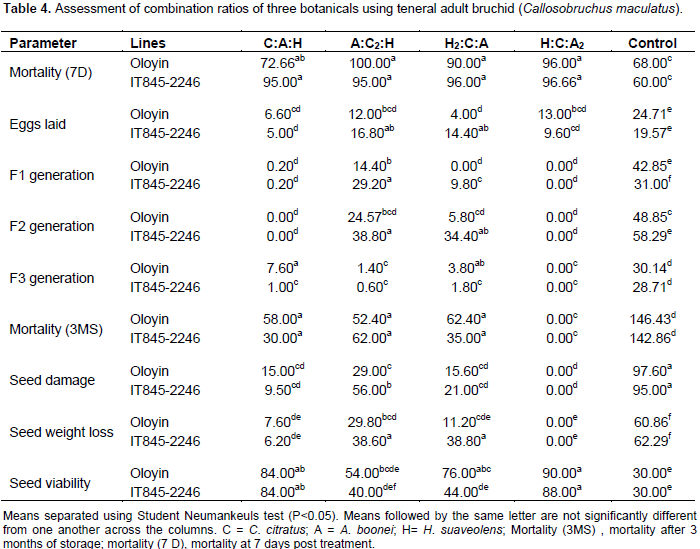