Study zone
The study was conducted in Ioba province located in South-western Burkina Faso (Figure 1). Ioba province belongs to the South-Sudanian climatic zone. This climatic zone  used  to  have  average annual rainfall greater than 1000 mm in the 1960s (Robert, 2010). However, under climate change, average annual rainfall is nowadays evaluated to 900-960 mm (MAHRH and GTZ, 2004; Schmengler, 2011; DPA Ioba, 2013). The province experiences rainfall variability in time and space (MAHRH and GTZ, 2004). Based on the data provided by the Ioba Provincial Directorate of Agriculture, the years 2012 and 2013 recorded the highest and lowest rainfall of the last decade 2004-2014, respectively (Figure 2). The livelihood in the study zone is essentially farm-based. Agricultural activities rely mainly on rainfed productions. The endemic crops in the study zone are sorghum, maize, cotton, millet, rice, groundnuts and beans; whereas the main animal species are cattle, small ruminant, porcine and poultry. 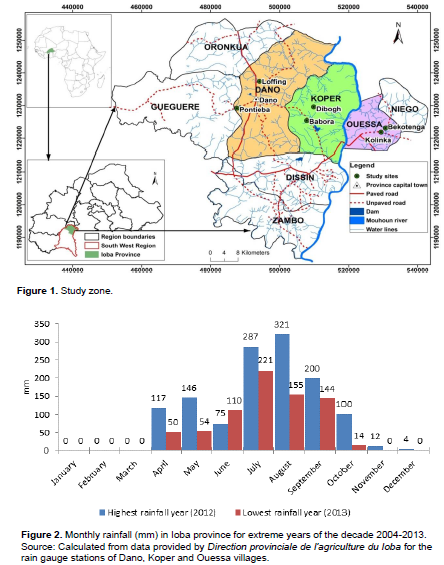 The main non-farm activities consist of petty trade and traditional gold mining. As for the rest of the country, education level is low. The study sites consisted of six villages selected in three sub-districts on the basis of demographic data, soil erosion information, soil and land use maps, and normalized difference vegetation index (NDVI) data of the province.
According to Bureau national des sols (BUNASOL) inventory, dominants soils types encountered in the Ioba province are:
i) Leached ferruginous tropical soils: they are dominant soils in Burkina Faso and represent 85% of the country lands (Pallo and Thiombiano, 1989).Two groups of this soil type are found in Ioba province.
a) leached and hardened ferruginous tropical soils which are generally shallow and form the main soil type of the province. They cover nearly 52% of Ioba lands. Most of cultivated lands fall into this type;
b) leached ferruginous tropical soils with spots and concretions, encountered for only 2% of the lands in Ioba. These soils are poor in organic matter, macro nutrient (NPK) and have low Cationic Exchange Capacity (CEC) (Pallo and Thiombiano, 1989);
ii) Hydromorphic soils: Also characterized by low organic matter content and very low phosphorus content, they constitute the third main soil type in Burkina Faso and cover 13% of its lands (Kissou et al.,  2000)  and    around    37%    of    the    Ioba   province   lands;
v) Lithosols: cover 3% of Burkina Faso territory (Kissou et al., 2000)and represents 5% of lands in Ioba province;
vi) Brown eutrophic tropical soils: they form 6% of soils in Burkina and 4% of Ioba province lands. Brown eutrophic tropical soils are constrained in NPK (Kissou et al., 2000).
Conceptual framework
Warming, rainfall and its unusual variability in a location are some of the most patent evidences of climate change for farmers. They can realize, feel and observe these changes without classic scientific measurements. We define this as perception of climate change. In perceiving climate change evidences, farmers can give trend over a period (e.g. increase and decrease of the amplitude of climate parameters). Beside the perception, farmers can understand changes, explain causes and implications for their activities. This allows them to take more and strong action (Figure 3), build strategies in order to cope, adapt to or mitigate these changes. We define the fact of understanding the causes of the changes as well as their implication for livelihood activities as awareness. Awareness can be raised by education capital, learning (e.g. from extension services and other developmental stakeholders), and through information (e.g. exposure to media). Because of their differences in assets endowment (education, financial resources, equipment, exposure to outside world) farmers of different socio ecological settings are expected to have different levels of climate change awareness. It appeared from literature that most of previous studies used interchangeably climate change perception and awareness (Mertz et al., 2008; Gbetibouo, 2009; Fosu-Mensah et al., 2012; Nzeadibe et al., 2012). 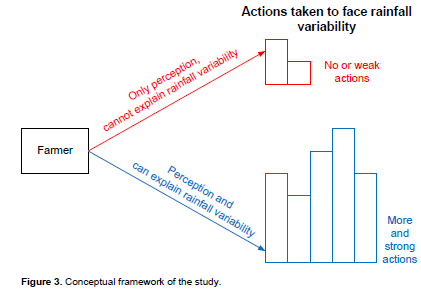 Sampling strategy and data collection
After selecting the six villages, 60 households were randomly selected per village using a list of households in the village. These lists were obtained from village leaders and updated before sampling. We obtained a sample of 360 households. The sample accounted for 29% of the total households in  the  six  villages.  The field surveys took place during dry season from January to March 2013. Community entry meetings were held before surveys. We were assisted during these meetings by local agricultural service personnel and local leaders. Surveys were performed through face-to-face interviews. Semi-structured questionnaires were designed and collected demographic, socio economic and geographical data as well as information on rainfall pattern. Famers were asked to give an appreciation of the rainfall pattern for the last five and to explain the causes of the pattern they observed. Ten years rainfall data was acquired from the provincial directorate of agriculture of Ioba.
Data analysis
The rainfall data was analyzed for trend detection in XLSTAT 2014 using Mann-Kendall trend test. Comparative analysis of the socio economic data was done in SPSS.20 using Z-test to test the difference between groups for the actions taken to face rainfall variability. Two groups of famers were considered: a group perceiving only rainfall variability but unable to explain, and a group perceiving rainfall variability and able to explain the reasons of this variability.

Farmers’ perception of climate variability and change
To facilitate appreciation by farmers, they were questioned on a period of 5 years. Results showed that about 99% of the study sample perceived variability of rainfall during the last five years (2009-2013). As shown in Figure 4, almost 60%  of  farmers  responded  that  the rainfall has decreased while for about 4% of farmers it has increased. A percentage of 36.33% of farmers however noted a fluctuation of the rainfall (e.g. no trend). 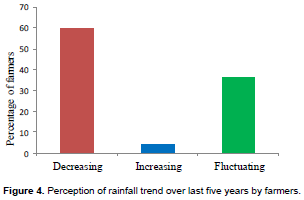 The perceived trends by farmers were compared to the trend of measured rainfall data using Mann-Kendall trend test (Table 1). This test revealed no trend in the rainfall for the considered period, implying fluctuating rainfall as observed by 36% of farmers. The perception of the remaining 64% of farmers did not fit the rainfall data trend. In addition to rainfall variability perception, 72.40% of farms noted a change in the onset of the cropping season. They estimated that onset of cropping season intervened late compared to the past. This calls for a change in the management of farming activities. 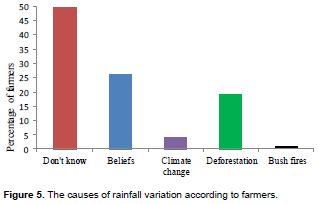 Farmers’ responsiveness to climate change and variability in terms of soil nutrient management
We analyzed measures undertaken by farmers in response to rainfall variation. The main identified measures are presented in Figure 6. Farmers’ responses in terms of sustainable soil nutrient management consisted mainly in the use of fertilizer alone (mineral or organic), the use of soil conservation measures alone (e.g. stone bunds), and the combination of fertilizer and soil conservation measures. As expected, a large proportion  of  farmers  who   have   no   climate  change awareness (55.13%) took no action in response to rainfall variability. A proportion of 34.72% of farmers who have climate change awareness took no action. These two percentages were significantly different at 5%. 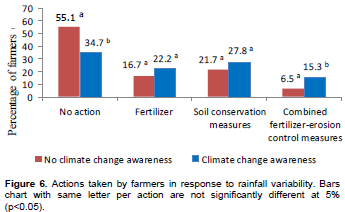 Awareness generating stronger responsiveness of famers to climate variability and change than perception
The findings of this study demonstrates that farmers largely perceive ongoing climate variability and change in the region as previously found by a nationwide study (Ouédraogo et al., 2010). However the perception by up to 64% of farmers did not fit the rainfall data trend. This illustrates the difficulties for farmers to keep an accurate track of inter-annual rainfall variations. This fact may negatively effect on their response capacity to climate variability and change. The issue could be address by building farmers’ capacities in agro meteorology through extension services and media. Indeed, a network of raingages set by agricultural extension office exists in the study area that could contribute to a better management of farming activities and efficient response to climate change. The approach however requires a better collaboration between famers and extension agents who can provide farmers with accurate time series rainfall information  and  help better  address   rainfall   variability effects on farm activities.
The findings of this study further highlight that farmers’ capability of understanding and explaining the underlying causes of rainfall variability is key for taking sound adaptive measures. Comprehension based on sole beliefs (lack of awareness) more likely leads to weak or not strong response in terms of soil nutrient management, in response to rainfall variability. The percentage of farmers with climate change awareness who combined the use of fertilizer and soil conservation measures was significantly higher than the percentage of farmers with no climate change awareness who took the same action. This combination is a stronger response and can have better effect compared to individual use of fertilizer or soil conservation measure alone. Farmers are more likely to take action against rainfall variability when they have climate change awareness. All farmers with climate change awareness may not take action as other factors (e.g. labor, financial resources and education) may affect sustainable soil nutrient management (Anley et al., 2007; Kassie et al., 2013; Lambrecht et al., 2014; Martey et al., 2014). Likewise without awareness, farmers will still adopt efficient measures based only on their perception of climate change. Farmers may adopt soil fertility management measures because of growing land scarcity and new market opportunities rather than the perceived climate change (Barbier et al., 2008).
Implications for policy intervention and research
Climate change is a growing issue worldwide in general and in particular for sub-Saharan African countries which are agricultural based economies. They will likely be more vulnerable due to the poverty of the populations, the rainfed agriculture and its current low performance. Building adaptive capacities and resilience to climate change  effects  in   agriculture sector will depend on available resources and a sound understanding of farmers’ behaviour in the face of the phenomenon. Perception and awareness to climate change are often used interchangeably. However our study demonstrates the needs for distinguishing the two as with awareness farmers are more likely to undertake strong adaptive measures. Therefore, policy intervention should aim at building and improving awareness among farmers. Research should as well distinguish between the two for providing suitable information and for better guiding decision making.

Authors are grateful to German Federal Ministry of Education and Research (BMBF) which fully funded this research through West African Science Service Center on Climate Change and Adapted Land use (WASCAL).