The aim of this study was to characterize phenotype indigenous sheep population in central zone of Tigray. A total of 450 adult sheep were sampled randomly for this purpose. Based on dentition adult sheep were classified into four age categories. Average BW of the sampled sheep in Tanqua-Abergelle, Kola-Tembien and Adwa districts were (20.19±0.19, 22.18±0.22 and 23.68±0.33) kg, respectively. Location had highly significant (p<0.0001) effect on body weight (BW) and most of the linear body measurements (LBM). Adwa sheep were heavier than Tanqua-Abergelle sheep, but comparable with Kola-Tembien sheep. Sex of the animal had significant (p<0.0001) effect on BW and most of the LBM. BW in rams and ewes in the study area were 23.23±0.25 and 20.81±0.13 kg, respectively. Age group had significantly (p<0.0001) affected BW and most of the LBM. The trend of BW and LBM increased with increased dentition class. Highly significant (p<0.0001) correlations were observed between BW and most of the LBM. Chest girth (CG), rump length (RL), tail length (TL) and body length (BL) were found to be the most important traits in the regression model determining male BW accounting for variability of 74%, while for female CG, pelvis width (PW) and RL were the most important traits accounting 73% of the total variability of female BW. Based on the present result one may develop selection criteria and productivity schemes of the local sheep.

Ethiopia is endowed with 29.33 million sheep (CSA, 2015) with diversified genetic pools adapted to a wide range of agro-ecologies. Environmental pressure also maintains a wide range of genotypes, each adapted to a specific set of circumstances (Getachew et al., 2010). At least 9 sheep breeds and 14 traditional sheep populations are  found  in Ethiopia (Gizaw et al., 2007).
Genetic improvement of the local livestock through appropriate techniques or selection and breeding programme is the need of the day (Yakubu, 2010). The usefulness of breed characterization of the indigenous livestock in general  and  sheep   in   particular   is   never   in   doubt, because characterization, inventory and monitoring of animal genetic resources (AnGR) are essential to their sustainable management and facilitate effective planning of how and where they can best be used and developed (FAO, 2015).
Even though the study area is potential in sheep production little works was done to characterize or to improve the indigenes sheep population of Tanqua-Abergelle, Kola-Tembien and Adwa districts (Gizaw, 2008; Tajebe et al., 2011) providing some information on some physical body measurements and characteristics, but it was limited.
Phenotype characterization of the existing sheep population, is the base for designing community based breed improvement and genotypic characterization, since genetic resources and production systems are not static and thus routine inventories and thus on-going monitoring is needed (Sölkner et al., 1998). The the objectives of this study were to characterize sheep in Central Zone of Tigray in their production system based on quantitative traits so that suitable selection criteria would be suggested.

Effect of location (district)
Location had highly significant (p<0.0001) for  body weight (BW) and other linear body measurements except pelvic width (PW) and ear length (EL).Similarly scrotal circumference was not influenced (p>0.05) by location. The reason for the significance difference of body weight and other linear body measurements of sheep among the three districts could be due to availability of feed and breed difference. The values obtained for BW in this study were smaller than those obtained by (Brilliant et al., 2012) which was 30.87±1.05 kg, 37.86±1.20 kg and 39.00±0.94 kg, respectively for the sampled sheep Yankasa sheep, Uda sheep and Balami sheep.
Effect of sex
Males, compared to females are generally higher in body weight and linear body measurements which might be due to the differences in sex hormones which regulate through differential genetic constitution in the two sexes. Sex had shown highly significantly effects (p<0.0001) on body weight (BW), chest girth (CG), body length (BL), height at wither (HW), chest width (CW), rump length (RL), pelvis width (PW) and tail length (TL), however ear length (EL) was not affected (p>0.05) by sex in the present study. Body weight rams and ewes in the study area were 23.23±0.25 kg and 20.81±0.13 kg, respectively. Male sheep were consistently higher (p<0.0001) than females in all significantly affected variables except pelvic width and chest width. This finding is in agreement with the report
for male sheep in Djallonke and Sahel sheep in Northern Ghana and the Kutta native sheep breed in Northern Pakistan which were 29.2±0.9 and 26.0±0.56 kg, respectively (Sohail et al., 2009; Peter et al., 2013). Higher than female body weight which were 20.0±0.4 and 22.9±0.41 kg, respectively. Higher body weight value in rams than in ewes indicated that this might be due hormonal differences and growth rate of the two sexes (Sobola, 2007). The linear measurements of rams recorded in the study area were larger than the linear measurements of ewes except CW and PW. These listed body measurements of both sexes in the study area were higher than with the value of (Peter et al., 2013) reported in Djallonke and Sahel sheep in Northern Ghana for male and female 60.9±0.8, 64.3±0.7, 73.5±1.0 and 64.4±0.9 cm and 54.4±0.4, 58.0±0.3, 64.0±0.5 and 57.7±0.4 cm, respectively for BL, HW, CG, and RL.
Effect of age
Body weight and linear measurements of the sampled sheep populations (Table 2), were significantly (p<0.0001) affected by the age groups except ear length. Body weight and linear body measurements increase with increase dentition class. According to Mekasha(2007) body size and shape of the animal rises until the animal reaches optimal growth. BW, BL, HW, CG, CW, RL, PW and TL were kept increased from one pair of permanent incisor up to three pair of permanent incisor. This implies that these variables might be best explained the growth pattern of the sampled sheep population in the study areas. Maximum values were observed in age group three and four as compare to age group one and two. These significant difference (p<0.0001) among (BW, BL, HW, CG, CW, RL, PW and TL) showed that those linear measurements were highly age dependent. In contrary variables such as EL was not affected by the age of the animals. The present finding is in agreement with the finding of (Peter et al., 2013) reported for Djallonke and Sahel sheep in Northern Ghana. Scrotal circumference was also significantly (p<0.0001) affected by age. Size of scrotal circumference increased when the age was increased from one pair of permanent incisor to fourth pair of permanent incisor. 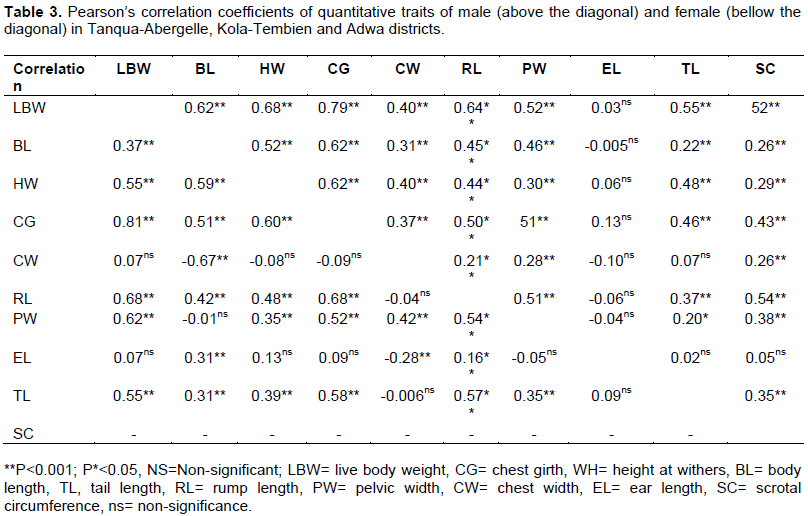 Similar to this study the strong positive correlation between the dependent variable body weight and the independent variable chest girth to predict body weight were observed in different previous works on sheep breed. For example, in North Wollo zone, Northern Ethiopia, Habru, Gubalafto district and in Selale Area, Central Ethiopia, Debre Libanos and Wuchale district of sampled sheep reported by Abera et al. (2014) and Mohammed et al. (2015) chest girth was the best variable for predicting live body weight than other linear body measurements for both male and female sampled sheep population.
Multiple linear regression analysis
Stepwise multiple linear regression analysis for male and female sampled sheep populations of Tanqua-Abergelle, Kola-Tembien and Adwa districts for predicting live body weight (LBW) from linear body measurements was found to have positive correlation with body weight. (Tables 4 and 5), shown the number of parameters entered in each step to predict the best fitted variables to estimate live body weight and their contribution in terms of adjusted coefficient of determination (R2-adjusted), mallows conceptual predictive criterion C(p), Akaike Information Criterion (AIC) and Schwarz Bayesian Criterion (SBIC) at different dentition and sex categories. Smallest Cp value indicates precision and small variance in estimating the population regression coefficients; while the coefficient of determination (adjusted-R2) represents the proportion the total variability explained by the model. Regression model was developed for males and females using the pooled data for all age groups due to the small proportion of animal at each age classes. Ten variable body measurements (body length, height at wither, chest girth, chest width, rump length, pelvic width, ear length, tail length and horn length) were used for females to estimate body weight, while for the estimation of male body weight scrotal circumference also take under consideration. Chest girth, rump length, tail length and body length were included in the mode linorder of importance and they accounted 74% of the total variability of the male sampled sheep population and chest girth alone accounted for 61% variation in body weight in the study area. In female sampled sheep population however, the three variables with positively contribution to the prediction model which were chest girth, pelvis width and rump length and were fitted first, second and third accounted for 73% of the total variability of the female sampled sheep population and chest girth alone accounted for 66% variation in body weight in the study area. Parameters used in estimation of the  multiple linear regression models showed that the male sampled sheep population had higher adjusted R2 (74%) than the values of female sampled sheep population (73%). This indicated that those linear measurements might predict more accurate in males than in females. In most circumstances chest girth was found to be the most important in accounting sizeable proportion of the changes in the body weight of the sampled sheep population in the study districts. Comparable measurements were reported for Habru, Gubalafto, Debre Libanos and Wuchale sheep in Ethiopia (Abera et al., 2014; Mohammed et al., 2015). Chest girth was more reliable in predict body weight than other linear body measurements at field level when there is no facilitate to take the whole measurements. Using  pooled age group the  best  fitted  model with criteria of AIC, Cp, adjusted-R2,  Root Mean Square Error (RMSE) and SBC criteria for male was  Y= -51.59 + 0.43CG + 0.33RL + 0.15TL +0.60BL, while for female the prediction equation was Y= -28.76 + 0.47CG +0.76PW+ 0.21RL, where, Y= response variable and (CG, RL, TL, BL PW) are explanatory or independent variables. 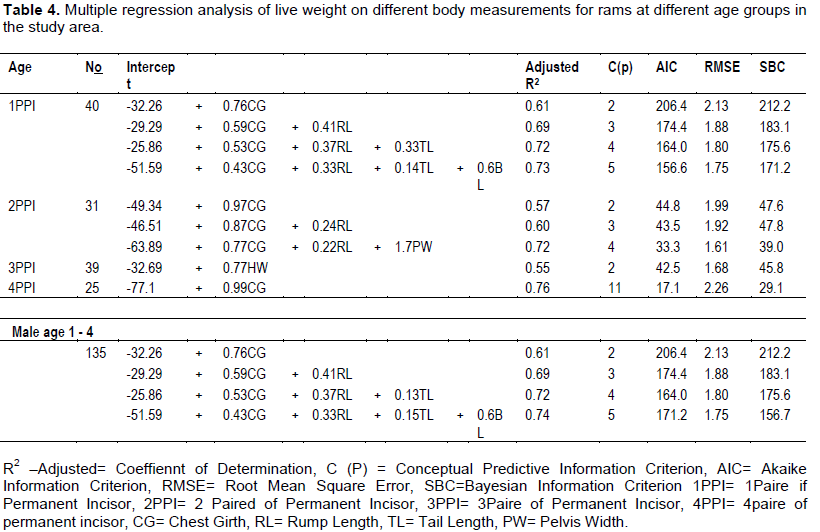 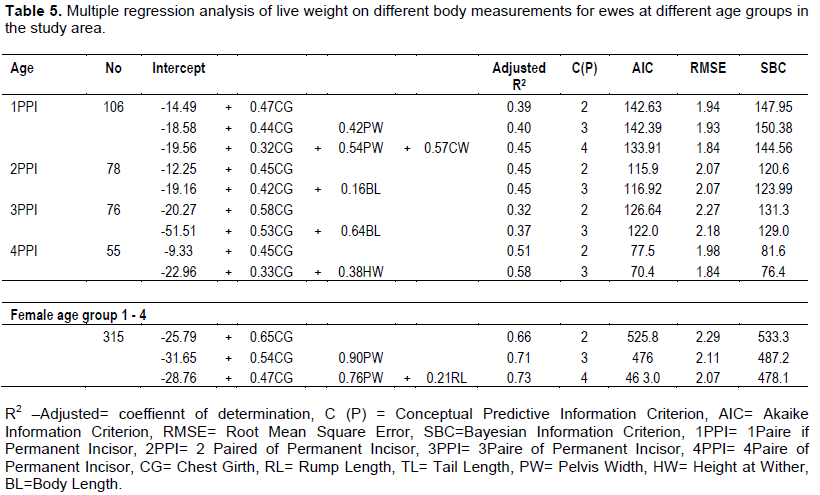 Multivariate analysis
Multivariate analysis was conducted using quantitative traits for male and female mature females and mature males independently at all age classes. among the multivariate analysis canonical and Discriminant analysis.
Canonical discriminant analysis
All squared Mahalanobis’ distances obtained among districts populations for male and female were significant (P<0.0001), indicating the existence of measurable differences between male and female districts populations (Table 6). The largest distance was found between district 1 and 3 for both male (3.69) and female population (3.45). All multivariate tests, that is, Wilk’s Lambda, Pillia’s Trace, Hotelling-Lawley Trace and Ray’s Greatest Root obtained from canonical Discriminant analysis showed significant differences (P<0.0001) among districts. This result is consistent with that of the univriate  analysis  that  tests  the  hypothesis  that   class means are equal. In this test, values of most quantitative variables considered were highly significantly different (P<0.0001) among districts.

Discriminant analysis
Quantitative variables varied between sex groups and correct classification percentages were calculated separately for male and female sheep populations. The overall classification rates (hit rate) of male and female sampled sheep population were 29.2 and 37.6, respectively. For males, most individuals were classified into their source population (76.29% for Tanqua- Abergelle, 66.67% for Kola-Tembien, and 56.9% for Adwa) (Table 7).

As indicated in (Table 8) females also a more or less similar patterns were observed and most Individuals were classified into their source population (71.43% district 1, 45.92% district 2, and 70% district 3).

Sheep populations in Adwa district were heavier than Tanqua-Abergelle sampled sheep, and comparable with the sheep of Kola-Tembien district. Most of the BW and linear body measurements were higher in rams than those in ewes. BW in the study area for rams and ewes were 23.23 and 20.81 kg, respectively. Body weight and the linear body measurements in both sexes increased with increased age (dentition class) up to the fourth age group. Body weight of male sheep in the study area was positive and highly significantly (p<0.0001) correlated with CG, HW and BL, respectively, while BW of female sheep population was positive and highly significantly (p<0.0001) correlated with CG, RL and PW, respectively. Step wise regression analysis showed that CG, RL, TL and BL in males and CG, PW and RL in females accounted for 74 and 73% of the total variability in body weight, respectively.