Pineapple (Ananas comosus L. Merril) is extensively produced in all tropical countries, particularly in Brazil, where pineapple production is expanding with 1.56 billion fruits produced in 2015 (IBGE, 2016). Although, much of pineapple production is destined for fresh consumption, processing for  production  of  juices  and  other  products has achieved great importance. Azevêdo et al. (2011) estimated that 77.5% of the material produced on the farm consists of pineapple leaves, stems, crowns and discarded fruit. After pressing, the total fruit is comprised of 75 to 85 juice and 15 to 25 fruit pulp or meal. Thus, there is a large quantity of byproducts from the pineapple industry that can be used in ruminant feed.
Moreover, the seasonality in forage production has been one of the factors responsible for the reduced productivity of ruminant livestock in Brazil, which combined with frequent fluctuations in cereal prices and protein supplements used in animal feed, has raised interest in the use of alternative foods to reduce production costs (Bezerra et al., 2016; Luz et al., 2017). Among the reasons for the use of byproducts for feeding ruminants is the reduction in production costs and satisfactory food in the dry season.
In the lamb meat production system, quantitative carcass characteristics are essential to the production process as they are directly correlated with the product and help to produce better products that are more competitive in the current market (Lage et al., 2014). Additionally, carcass yield depends on relative cut weight among other factors. Thus, it is essential to understand the effects of nutrition on carcass composition. Besides that, the different cuts that comprise the lamb carcass have different economic values and commercial quality.
The study of non-carcass components can be used as an indirect nutritional assessment in lamb production. The weight of non-carcass components usually corresponds to the animal weight gain, but often to a lower extent. Thus, knowledge of the sources of variation in body organs can help develop strategies to evaluate the effects of nutrition on growth and to optimize the use of alternative foods in ruminant diets (Costa et al., 2013; Cutrim et al., 2016).
Therefore, the aim of the present study was to evaluate the effect of pineapple by-product silage as a substitute for elephant grass on carcass characteristics, commercial cuts and non-carcass components in feedlot lambs.

The Brazilian Committee for Care and Experimentation approved all procedures involving animals in this study (number 003/2014).
Study location, experimental animals and diet
This study was conducted in the Laboratory of Animal Nutrition in the Department of Animal Science at the Federal Rural University of Amazonia in Parauapebas, State of Pará, Brazil. In total, 25 individuals of various breeds were used in the study with a predominance of Santa Inês individuals. The individuals were castrated males with a mean initial body weight of 18.0±3.4 kg and an average age of four months. Prior to the study, the animals were marked, vaccinated (against ectoparasites and endoparasites) and given vitamins A, D and E. The animals were kept in individual dirt pens (2.0 x 2.5 m) and had free access to feed and water. The experimental period lasted 76 days with a 14-day adaptation period.
Five diets were formulated to meet maintenance requirements and a 200 g/day weight gain (NRC, 2007). The forage to concentrate ratio was 70:30 with elephant grass (Pennisetum purpureum Schum.) and pineapple by-product silage as forage on a dry matter basis. The pineapple by-product silage replaced the elephant grass in the following concentrations: 0, 25, 50, 75 and 100% on a dry matter basis. The concentrate consisted of maize meal, soybean meal, dried molasses, urea, limestone and a complete mineral mixture (8.0 g/kg of DM) (Table 1). Experimental diets were fed ad libitum to achieve a refusal rate of 10% (based on dry matter) of that offered. Feed was provided as total mixed ration daily at 8:00 a.m. and 3:00 p.m. The animals had access to water ad libitum throughout the experiment. 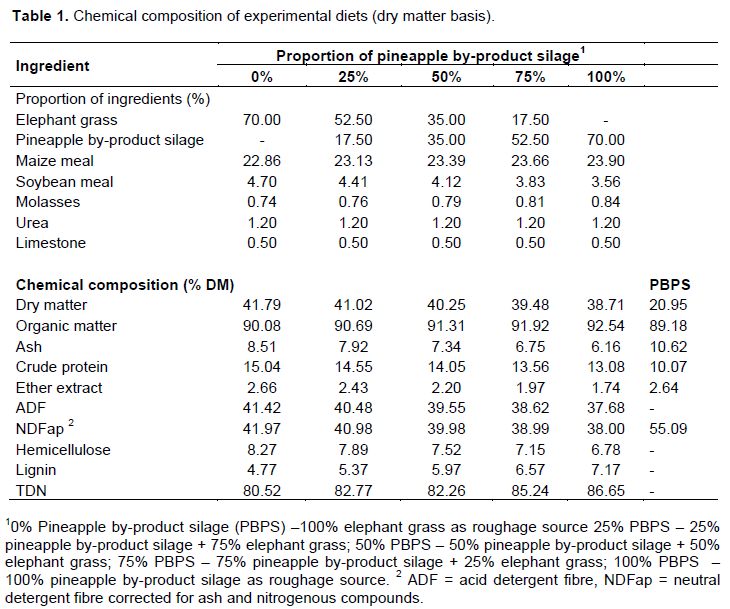 The pineapple by-product silage was composed of skin, crown and bagasse resulting from fruit processing for pulp production. The skin and crown were triturated in a sieveless (different particle size) stationary disintegrator upon silage preparation and ensiled in cement shackles. The compaction of silage was carried out manually and closed with canvas silos. The silos were opened 30 days after storage immediately before the silage was fed to the animals. The chemistry composition of pineapple by-product silage, proportion of each dietary ingredient and chemical composition of the feeds is shown in Table 1.
The elephant grass (P. purpureum Schum) was provenient from an area already established located next to the feedlot where the experiment was undertaken. It has a small slope and every cut was fertilized with 80 kg of nitrogen and 30 kg of potassium chloride per hectare. The elephant grass had a mean age of approximately 70 days and was cut by machine (particle size of 1.5 cm), to produce surface silos. The silo was opened for use 100 days after ensiling, which had the smell and color of a regular silage.
Slaughter and quantitative carcass’s measurements
At the end of 76 days, animals were weighed (BW) and fasted for 18 h with free access to water. The animals were then weighed again for determination of body weight at slaughter (BWS) and to assess the weight loss resulting from the imposed fasting (LF), which was calculated as follows: LF (%) = (BW – BWS)/BWS x 100. At slaughter, animals were anesthetised by stunning in the atlanto-occipital region followed by bleeding by sectioning the carotid and jugular veins. Blood was collected in a polyethylene container and weighed per normative instruction No. 0.3 of 01/13/2000 (Technical Regulation of Methods for Humane Slaughtering of Livestock).
After slaughter, the gastrointestinal tract (GIT) content was removed for determination of empty body weight (EBW) to calculate hot carcass yield (HCY) with the following equation:
HCY (%) = hot carcass weight (HCW) / EBW x 100
The HCW was recorded after skinning, evisceration and removal of the head, paws and genitals. After chilling the carcasses for 24 h at 4°C, the cold carcass weight (CCW) was recorded. Chilling loss (CL) was calculated with the following equation:
CL (%) = (HCW – CCW) / HCW x 100
The cold carcass yield was calculated with the following equation:
CCY (%) = (CCW/ BWS) x 100
The carcasses were split in half, and both  sides  were  divided  into the following seven anatomical regions: neck (seven cervical vertebrae; oblique incision between the seventh cervical and first thoracic vertebrae); shoulder (scapula, humerus, ulna, radio and carpal bone); true rib (first five thoracic vertebrae in addition to the upper half of the corresponding ribs); false ribs (last eight thoracic vertebrae in addition to the upper half of the corresponding ribs); flank (straight line from the dorsal end of the abdomen to the tip of the sternum); loin (six lumbar vertebrae perpendicular to the back between the thirteenth thoracic and last lumbar vertebrae); and leg (gluteal, femoral, and leg regions; tarsal bone, tibia, femur, ischium, pubis and ileum separated by a cross-sectional cut to the back between the last two lumbar vertebrae).
All cuts were weighed separately to calculate the yield based on the cut weight/CCW relationship expressed as a percentage. In addition, subcutaneous fat thickness (SFT) and loin eye area (LEA) were measured on the left half of the carcass. The SFT was measured using a calliper on the longissimus dorsi section between the last dorsal and first lumbar vertebrae as previously described by Osório and Osório (2005). The LEA was drawn on the exposed longissimus dorsi muscle using a transparent plastic film in the same region where the SFT was measured.
The non-carcass components, including organs (spleen, heart, liver, lungs and kidneys), by-products (blood, skin, paws, head, omental-mesenteric fat, perirenal fat and internal fat) and viscera (rumen-reticulum, omasum, abomasum, small intestines, and large intestines) were weighed. Then, the viscera were emptied, washed and weighed, separately.
Statistical analysis
The experimental design was completely randomized with five treatments (pineapple by-product silage concentrations of 0, 25, 50, 75 and 100%) and five repetitions per treatment. The initial animal weights were the covariates. Data were analyzed using Statistical Analysis System (SAS) software, and the following analyses were performed: analysis of variance using PROC GLM with orthogonal polynomial contrast to analyze linear, quadratic, and cubic effects by the diets and regression analysis using PROC REG at a 5% significance level.

Moreover, NDF is a chemical fraction consisting mainly of cellulose, hemicellulose and lignin. These polymers have different physicochemical bond arrangements, which allow their composition to change, and can be found in different proportions in food, particularly in by-products (Costa et al., 2012).
Assessment of carcass cut yields is essential to complement calculations of animal performance during growth and to estimate the commercial value of carcasses (Oliveira et al., 2013). The LEA is used to estimate the amount of muscle in the carcass due to its high correlation with muscle content. Ttherefore, the absence of alteration in the LEA can be considered positive when working with diets containing by-product, because the cost with feeding is reduced without altering the performance of the animals (Pinto et al., 2011).
Subcutaneous fat thickness measured above the longissimus dorsi muscle is highly correlated with total carcass fat percentage. There is no standard for minimum fat cover thickness in lamb carcasses. Thus, there is no standard value for carcass classification regarding low or excess fat deposited in Brazil. However, according to the classification of Silva Sobrinho (2001), carcasses in the present study had low fat content (1 to 2 mm in thickness).
The weight of the false rib and loin cuts increased linearly when elephant grass was replaced with pineapple by-product silage in the diets (P<0.05, Table 3). No significant differences were observed in the weights of the other cuts (P>0.05). The results observed in the false rib cut may be associated with dietary energy density, which increased with the replacement of pineapple by-product silage (Tables 1 and 3). Because fat accumulates at a faster rate in the rib (Prado et al., 2015), the increase in dietary energy density may have further accelerated the process of fat deposition in this cut, thereby making the false rib cut to gain weight with the addition of pineapple by-product silage (P<0.05). The same results were observed for absolute loin weight (P<0.05, Table 3). The loin cut has a significant amount of fat in its composition. Therefore, the increase in dietary energy density may also explain the gain in absolute loin  weight, which may cause a more rapid fat deposition (Carvalho et al., 2014). 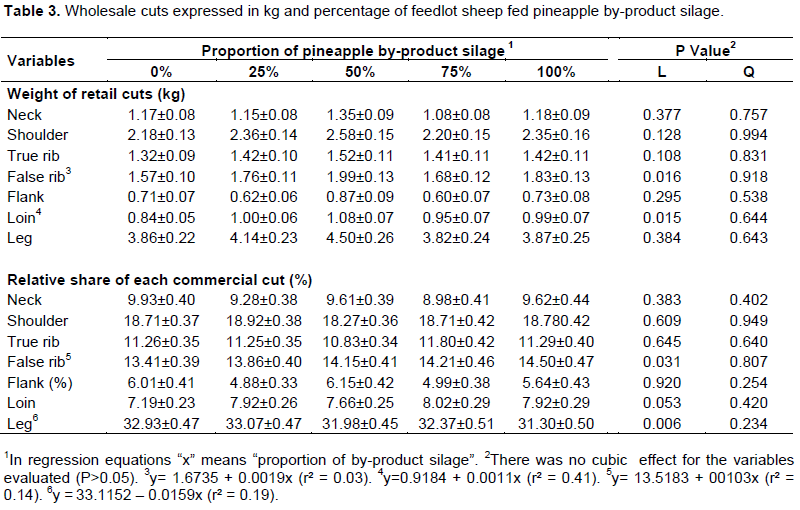 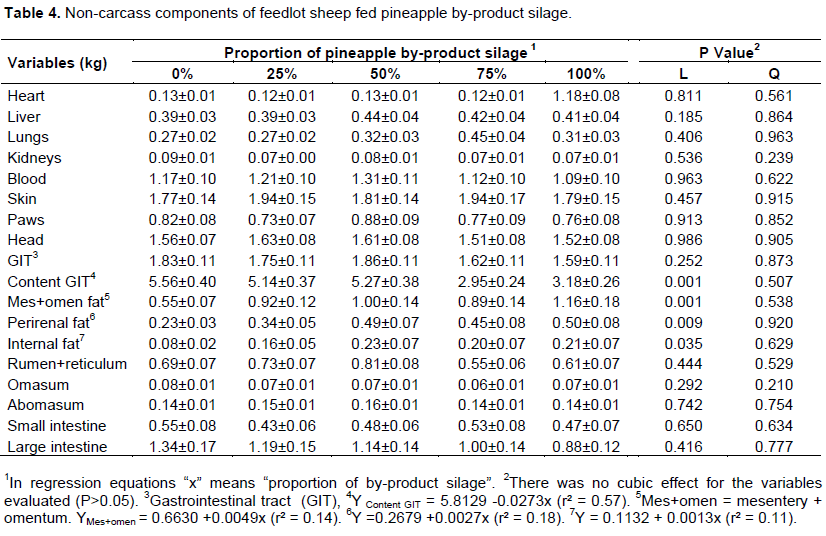