At high concentrations, Aluminium (Al) can be a serious threat to agricultural production because it inhibits growth of the roots, inducing oxidative stress, callose induction, peroxidation of the cellular membrane, nutrient imbalances and ends with cell death. This finding aimed to investigate threshold toxicity level of Al on finger millet varieties. The threshold value was determined by wrapping and germinating twenty randomly selected and surface sterilized seeds in petri dishes. Thirty-six hours-old seedlings of uniform size in three replication were transferred to the nutrient solution having Al concentrations ranging from 0 to 200 µM and allowed to grow for a further 8 days. It was found that biomass production decreased in root starting from 50 µM. The finger millet plants growing displayed three distinct Al tolerance phases in roots. A high phase tolerance occurred between 0 and 50 µM, slight tolerance between 50 and 125 µM and intolerance phase above 125 µM. The conclusion was that under the defined growth conditions, Al toxicity would likely begin with an Al concentration in the solution higher than 50 µM.

Acid soils (with a pH of 5.5 or lower) are among the most important limitations to agricultural production. It has been estimated that 15% of the world´s soil is acidic and that over 50% of the world’s potentially arable lands are acidic (von Uexküll and Mutert, 1995). Aluminium (Al) ranks third in abundance among the earth’s crust elements, after oxygen and silicon, and is the most abundant metallic element. A large amount of Al is incorporated into aluminosilicate soil minerals and very small quantities appear in the soluble form, capable of influencing biological systems (Silva et al., 2012). When pH drops below 5.5, aluminosilicate clays and  aluminium hydroxide minerals begin to dissolve, releasing aluminium-hydroxyl cations and Al then it exchanges with other cations. The chemistry of Al in soil solution is complicated by the fact that soluble inorganic (such as sulfate and fluoride) and organic ligands form complexes with Al. Whether a ligand increases or decrease aluminium solubility depends on the particular aluminium-ligand complex and its tendency to remain in solution or precipitate. The mononuclear Al species is considered as the most toxic form of aluminium (Kochian, 1995). Aluminium bioavailability and, in consequence toxicity, is mainly restricted to acidic environment.
At high concentrations, Al can be a serious threat to agricultural production because it inhibits growth of the roots through various mechanisms, inducing oxidative stress (Zheng and Yang, 2005), callose induction, peroxidation of the cellular membrane, aluminium accumulation and nutrient imbalances and ends with cell death (May and Nordstrom, 1991). There is considerable variability in Al tolerance within species and this has been useful to breeders in developing Al-tolerant cultivars of various crops. Generally, there are two main types of Al tolerance mechanisms: a) those that exclude Al from the root cells and b) those that allow Al to be tolerated once it has entered the plant cells (Barceló and Poschenrieder, 2002; Kochian et al., 2005).
Finger millet is particularly rich in dietary fiber and minerals such as calcium and iron as compared to major cereals grown in Ethiopia (Wondimu and Takebe, 2001). Babu et al. (1987) reported that some high-yielding varieties also contain high protein content (8 to 12%) and also rich in calcium content (294 to 390 mg per 100 g). Even though it is an important crop as a food security, production of the crop is inconsistent due to biotic and abiotic stresses; aluminium toxicity is one of the factors. Hence, this work initiated with the aim of screening of finger millet varieties for their Al tolerance in order to enhance the productivity of finger millet in Ethiopia and in the world.

Equipment setup
Dense narrow holes were introduced into as many eppendorff tubes as required in such a way that the holes did not allow to pass finger millet seeds through but rather allowed in air bubbles for aerating the seedlings in the tube. "Rack" like plate to hold the perforated Eppendorff were made from jar plastic plate by introducing wide holes capable of holding and submerging eppendorff tubes in the nutrient solution. White plastic dishes were used as solution container with adjustable lids.
Plant materials and germination conditions
Six improved national cultivars of finger millet (Eleusine coracana) were obtained from Nekemte Agricultural Finger Millet Research Center. Twenty randomly selected and surface-sterilized seeds of each variety were wrapped and germinated in a tissue paper, moistened with distilled water, in Petri dishes. Thirty six hours-old seedlings of uniform size were transferred to the nutrient solutions in three replications and allowed to grow for a further 8 days.
Nutrient solution culture and treatments
Nutrient solution culture prepared according to Delhaize et al. (2004); and composed of 500 µM KNO3, 500 µM CaCl2, 500 µM NH4NO3, 150 µM MgSO4.7H2O, 10 µM KH2PO4, 2 µM FeCl3 (III) and varying concentrations of Al2 (SO4)3.18H2O. Different Al concentrations (0, 5, 10, 25, 50, 100, 112.5, 125, 150, and 200 µM) were used for optimizing the threshold toxicity level of Al on finger millet. The control experiment also included contained all the above nutrients except Al2 (SO4)3.18H2O. The experiment was laid down in Randomized Complete Block Design (RCBD) with three replications.  The pH of the nutrient was adjusted to 4.3 by using 1 M HCl and the solution was renewed every 24 h.
Data recording and statistical analysis
After eight days root and shoot length of seedlings were measured using a ruler, while fresh weight of these seedlings was taken using a digital balance (version no. 339, capacity 210 AE Adam ® with 0.0001 precision). Mean and analysis of variance (ANOVA) on each treatment was conducted using SPSS software version 20. Tukey HSD was used to make pair wise mean comparison of each germplasm under control and Al-treated conditions. Relative total root length (RTRL) and RDI also estimated following method of (Mendes, 1984).

Optimizing threshold toxicity level of Al on finger millet varieties
The aluminium tolerance test showed that finger millet varieties grown at lower Al concentration had higher root length (RL) than those treated with relatively high level of Al concentration (Figure 1, Table 1; p < 0.01). Variety Necho had the longest root under control condition but its root length kept decreasing with increasing Al concentration until 200 µM where it showed the lowest root length while, Gute was a variety with superior performance under acidic conditions. Varieties grown under 0 and 112.5 µM showed 50.65% inhibition of root growth in Gute found tolerant variety, while 83.20% inhibition of root growth was found in Necho variety (Figure 2). 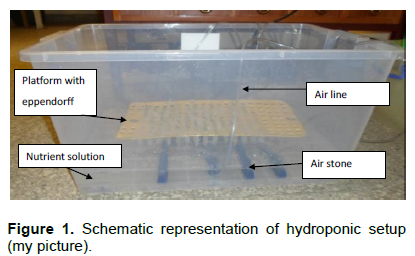 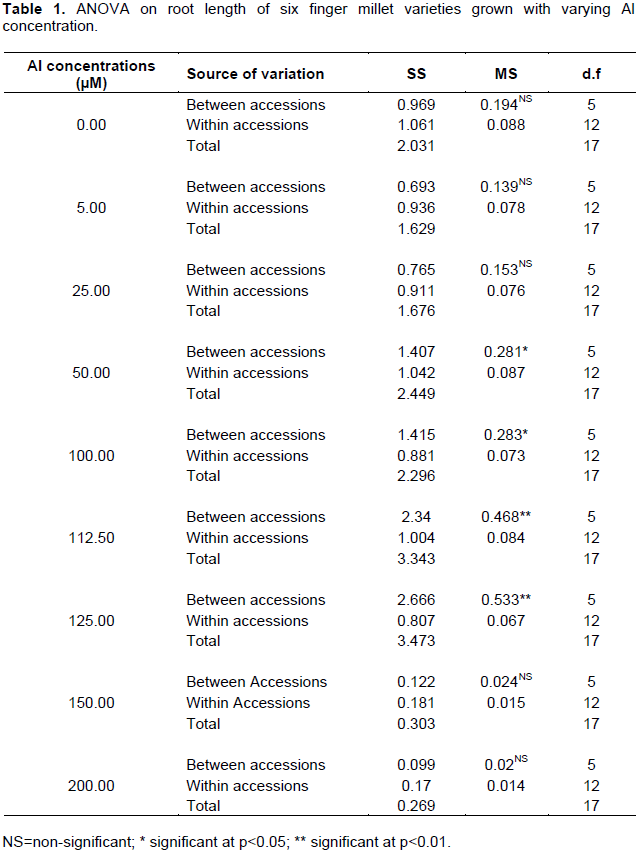 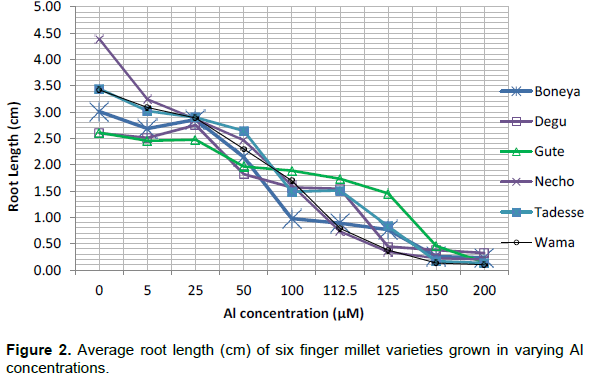 The finger millet plants growing displayed three distinct Al tolerance phases in different Al concentrations. A high phase tolerance occurred between 0 and 50 µM, slight tolerance between 50 and 125 µM and intolerance phase above 125 µM. Analysis of variance revealed non-significant (p < 0.05) difference between finger millet varieties at 0, 5, 25, 150 and 200 µM of Al concentration. However, 50, 100, 112.5 and 125 µM Al concentrations showed significant Al induced stress between the varieties, respectively, at p < 0.05 and p < 0.01 (Table 1). This implies low Al concentration (less than 50 µM) was not strong enough to create stress condition on finger millet root and high Al concentration above 125 µM make greater inhibition in all finger millet varieties without discrimination. Therefore, 112.5 µM Al concentration was selected as threshold concentration for extensive screening activities due to its multiple advantages. Firstly, it allows distinguishing of the various tolerance classes (tolerant, intermediate and susceptible,) at the highest accuracy level (that is, p<0.01 unlike the lower concentration levels). Secondly, its usage ensures high statistical accuracy with minimum cost as compared with the 150 µM Al. At Al concentration of 150 µM and above, the growth of roots of all the varieties were greatly hampered to the extent that there was nearly no difference among them. These data were somewhat similar to previous observations relating inhibition of root elongation with increased Al concentrations in the growth medium (Echart et al., 2002; Wagatsuma et al., 2005; Choudhary et al., 2011). The conclusion was that under the defined growth conditions, Al toxicity would likely begin with an Al concentration in the solution higher than 50 µM (Figure 3). 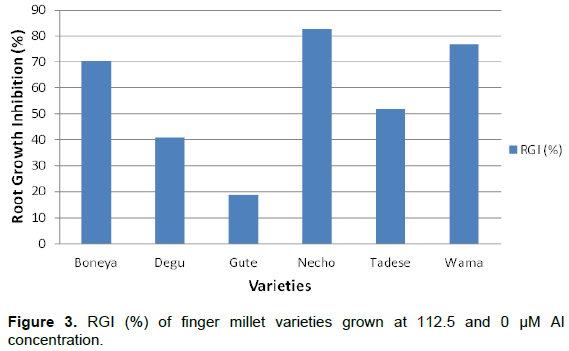