The quality of cotton fibers in Brazil has been studied. This was done by studying the fiber samples obtained from bolls removed from the middle third of the plants. These fiber samples are referred to as “standard sample”. This way to collect fiber data requires lots of labor, and may disguise the results obtained in experimental appraisals, due to human errors in gathering boll. Besides, cotton yield and quality is influenced by water availability, especially during abiotic tests with water deficit, in which, fiber quality samples may be affected by boll position. Thus, the objective of this study was to evaluate the influence of sampling method on the technological characteristics of cotton fibers, in irrigated and water stress tests at different stages of the crop cycle. Two methods were made to collect cotton fiber. The first method was the standard sample and the second way was gathering sample of bolls in randomized position, through all experimental plot (called randomized sample). The results show that the analysis performed by standard sample tend to overestimate the values of the fiber quality parameters, differing from the results obtained with the randomized sample that is representative of all plot. It was observed that the variability of cotton fiber quality affected by water stress treatments were best represented using bolls obtained by randomized method. Consequently, in the case of experiments with water stress, the most representative method to collect cotton fiber, is through a sampling of all the plant, and not only of the middle third.

Cotton profitability relies on both yield and quality of cotton  fiber,  and  also  depends   on   the   interaction  of several factors, such as crop management, environment factors and genetics. Beltrão and Azevedo (2008) affirmed that cotton fiber is mainly conditioned by hereditary factors, although some technological characteristics are decisively influenced by environmental factors and crop management. Thus, the cultivars selection in breeding programs is an important activity, in which crop behavior, conditioned by environmental features must be taken into account during evaluation.
Whilst cotton fiber yield is easily quantified, fiber quality is a complex parameter (Bradow et al., 1997). Measurements of fiber quality are complicated due to natural and environmental variations in fiber structure and maturity. These variations may occur both in bale, plant, boll or seed. Thus, this is essential for breeding programs to make progress in quality improvements, and the results obtain from the research are reliable. Uniformity of the sample collected for analysis represents the real condition of the fiber quality of any experimental area or plot (Bradow et al., 1997).
Fiber quality analysis in Brazil are done using a "standard sample” from each plot, in which bolls are harvested from the middle third of the  plants, and, in this case not representative of all experimental plot, considering that plants may suffer any stress, after or during boll formation. Therefore, this methodology can generate erroneous estimates of the cotton fiber yield or characteristics of the quality fiber measure by High Volume Instruments (HVI) (Belot and Dutra, 2015; Kelly at al., 2015).
The standard sample consists of harvesting 20 bolls of the middle third of the plants, which may mask research results. According to Belot and Dutra (2015), comparing the boll of top and lower position with the middle third of the plants, great discrepancies in some characteristics such as micronaire, maturity and percentage of fibers were found. These differences occur probably due to complexes interactions among soil properties, soil water and nutrients availability and plant populations (Bradow et al., 2000). So, the use of standard methodologies in research, harvesting only in specific positions, do not allow safety evaluation of the cotton fiber quality produced in field (Belot and Dutra, 2015).
This problem can be further aggravated in the case of tests with abiotic stresses, such as water stress, since this may occur at different stages of the crop cycle, disturbing the cotton fiber formation with consequent changes in quality. These changes depend on the fruit positions at the time  of  the  water  deficit.  Thus,  ideally, samples should be taken to represent all the fruiting points of the plant, and not only those of the middle third.
The objective of the present study was to evaluate the influence of the sampling methodology on the characteristics of cotton fiber quality to cultivars under irrigation system, with and without water stress, in the Brazil's semi-arid region.

The experiment was carried out from June to November 2015, at the Experimental Farm of the Agricultural Research Company of Rio Grande do Norte (EMPARN), located in Apodi, RN. Experimental area have central geographical coordinates of 5°37 '19 "S and 37°49' 06" W, with altitude range of 128 to 132 m.
The climate of the region is characterized as hot and semi-arid tropical, with predominance of BSw'h' type, according to Köppen's climatic classification. The soil of the experimental area was classified as eutrophic Cambisol (Santos et al., 2006), clay-sandy texture, with 49% sand, 45% clay and 6% silt. It was used no-tillage system with a 3 row mechanized sowing machine, and no thinning was required. Fertilization was performed according to the technical recommendations for the crop, based on soil fertility analysis (Table 1).

The experiment was carried out in a randomized complete block design with split plot arrangement, and with water deficit periods in main plot. Cotton cultivars were in subplots, and sampling methods in sub-subplots with four replications. In the plots, treatments consisted of 6 periods of water deficit, named:
1. Initial (IN)
2. Floral bud (FB)
3. Early bloom (EB)
4. Peak bloom (PB)
5. Open bolls (OB) and
7. Control without water deficit (IR).
Cotton cultivars were:
1. BRS 286
2. BRS 335
3. BRS 336
4. BRS 372
5. BRS 368RF
6. BRS369RF
7. BRS370RF and
8. BRS 371RF
Sub-subplots sampling methods: the standard sample (SS) and plot sample (PS). The standard sample consisted of 20 bolls harvested in the middle third of plants, while the plot sample consisted of 100 g of cotton fiber, randomly collected from the all experimental plot, harvested in different plant positions.
Each experimental unit consisted of 4 spaced rows of 0.8 and 6.0 m length, totaling a gross area of 19.2 m2, with the two central rows as useful area (8 m2), excluding at least 1.0 m from each border. Water deficit applied consisted of a 15 days period, without irrigation during programmed phenological stages (Table 2). After each deficit period, plants returned to normal frequency of irrigation, calculated considering the crop evapotranspiration. Total depth irrigation for each treatment is presented in Table 2.

A fixed conventional sprinkler system was used for irrigations, with sprinkler spacing of 12 x 15 m, application intensity of 9 mm h-1 and Christiansen uniformity coefficient (CUC) of 85%. Irrigations were made at each 3 days, with irrigation depth determined by crop evapotranspiration (ETc) (Allen et al., 2006). Agronomic and irrigation data are presented in Table 3. 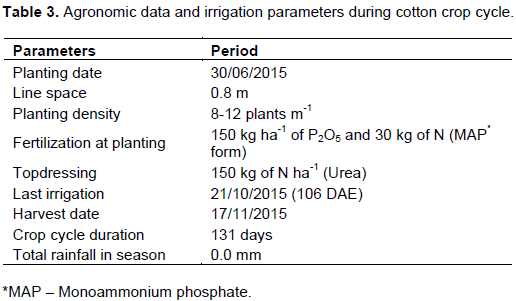 Phytosanitary treatments were carried out, when the first symptoms of pests and diseases appeared, as well as the control of weeds. The time of harvest were evaluated with the lint percentage and inherent characteristics of fiber quality as length (UHM), uniformity (UNF), short fiber index (SFI), strength (STR) , elongation (ELG), micronaire index (MIC), reflectance (Rd) and yellowing degree (+b). The quality characteristics of the fibers were evaluated in the Fibers and Yarns Laboratory of Embrapa Cotton, through the High Volume Instruments (HVI) equipment.
Evaluated variables data were submitted to analysis of variance by the F test at 1, and 5% of probability. For statistical analysis, R software (R Development Core Team, 2011) was used. When a significant effect was verified in the variance analysis, data obtained in different treatments were compared through the Tukey test at 1 and 5% of probability.

To accomplish the influence of the sampling methodology on cotton fiber quality, the discussion focused on the sample factor and its interaction with water deficit and cultivars. Observing the results presented in Table 4, it can be noted that the sampling method had no influence on the data of UNF and SFI. For the interaction between the factors, considering the water deficit versus sampling, the interaction was not significant for the STR and ELG parameters, while the cultivar versus sampling interaction was significant only for the UHM data. These results proved that there is variation in cotton fiber quality within the same plant, depending on the boll position, as discussed by several authors, such as Bradow and Davidonis (2000), Bauer et al. (2009) and Feng et al. (2011).
Thus, if the bolls are harvested bolls just in the middle third of the plants, the result of fiber quality analysis can be masked, not representing the real condition of the plot, agreeing with the study of Belot and Dutra (2015). Additionally, for experiments or field appraisal, in which cotton plants endured abiotic stresses, water deficit is the best way to estimate cotton fiber quality in harvesting the whole plant.
Environmental variation that occurs within the plant canopy, between plants and between plots, causes great variability in fiber quality characteristics, not only at boll level, but also among plants and plots (Bauer et al., 2009; Bradow and Davidonis, 2000; Feng et al., 2011). In this way, the more uniform and representative the conditions of the plant and the plot as a whole is with the sampling, the more representative the results of the fiber quality analysis will be.
The cotton fruits generally develop rapidly up to 16 days after the anthesis (DAA), reaching their maximum size approximately 24 DAA, being mature and open between 40 and 60 days after the anthesis (Kim, 2015). When water stress is applied in diverse phases of the crop phenological cycle, the stress will affect the bolls differently, depending on the stage of the fiber  formation. Thus, for the determination of the fiber quality in tests of water stress, the most indicated is to gather boll samples representing all plant positions, in order to avoid results with mistaken estimates. Figures 1 to 5 show the values of the cotton quality parameters of the evaluated fibers. It is observed that the lint percentage (Figure 1A), determined from the SS, was underestimated just when water deficit occurred at the early flowering, being overestimated in the other treatments when the analysis was performed based the SS gathering. This is due to the fact that in the standard sampling method, only the middle third of the plants are selected, excluding the bolls of top and bottom, and so, inadequate for assessments in water stress treatments, on which lint percentage may be affected depending on the phenological phase of the harmful stress. 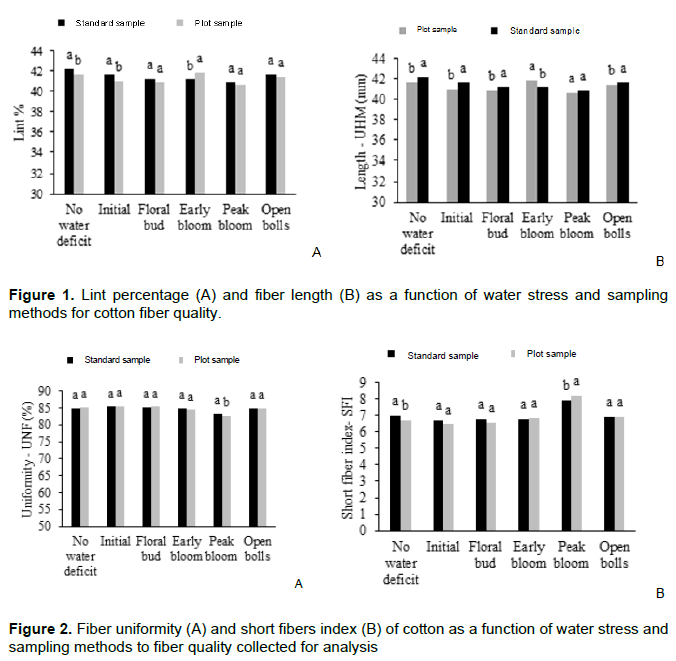 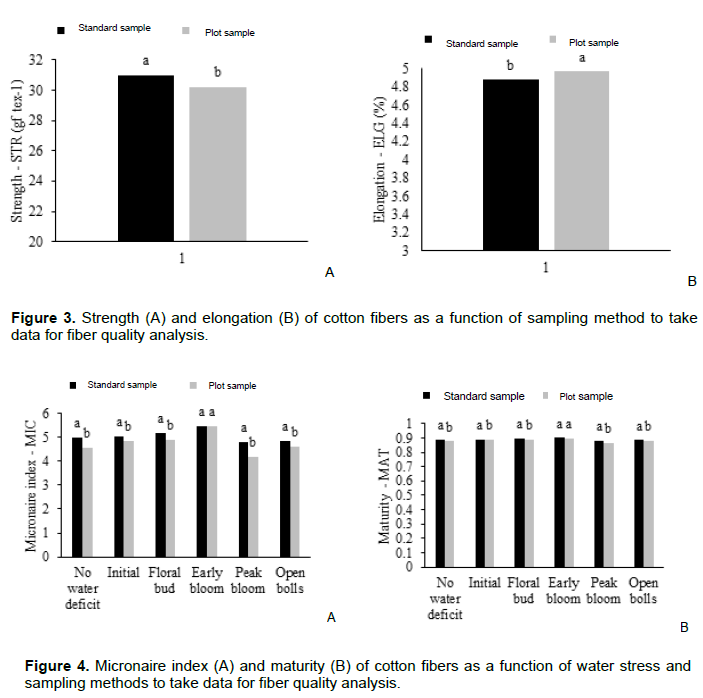