Zizyphus spina-christi L. is one of the wide varieties of plant grown in Al-Ahsa Oasis in Saudi Arabia and known locally as Alnabaq (buckthorn). The objective of this investigation was to study the effects of postharvest calcium chloride applications on fruit quality of buckthorn under cold storage condition at 2°C and 90% RH for 5 weeks.¬¬ Fruits were dipped in calcium chloride at different concentrations (0, 2 and 4% W/V) for 10 min. Weight loss, total soluble solids (TSS), ascorbic acid content, fruit firmness and peroxidase activity were determined after Ca++ treatment and during cold storage every one week. The results revealed that, both the storage periods and treatments significantly affected the postharvest quality of Alnabaq fruits during cold storage condition. A reduction in fruit firmness and ascorbic acid content was observed during storage period. In addition, the results showed that, fruit treated with calcium chloride recorded higher firmness than the control, while lower peroxidase activity was recorded during cold storage at 2°C for 5 weeks. Generally, these results indicated that post-harvest Ca treatments delayed fruit softening and decreased weight loss.
Key words: Storage, Ziziphus spina-christi, weight loss, firmness, CaCl2, peroxidase activity, ascorbic acid.

Ziziphus spina-christi L. (family Rhamnaceae) is a subtropical plant known as Alnabaq or Sedr, which is reported to be used as alternative medicine for human (Shahat et al., 2001). The fruits are rich in carbohydrates and Mg, Ca, Fe and Zn, whereas, the seeds are rich in crude fiber (Osman and Ahmed, 2009). Al-Ahsa Oasis in Saudi Arabia is known for its wide varieties of biodiversity including Z spina-christi L. trees, which grows wildly and is widely known locally as knar or Alnabaq, and it tolerates salinity and high heat, but the fruits vary in size and taste, making it undesirable for consumption. Therefore, several types of Alnabaq were introduced from China and India, in the form of cuttings and grafted on the local variety (species), including the Chinese Nabq (Ziziphus maruritiana L.), the widespread "Beyuan" cv. in the Kingdom. These fruits are considered as an economic crop in the arid and semiarid regions. However, many factors have influences on the quality of buckthorn fruit, such as agricultural practices and storage conditions (Soliva-Fortuny et al., 2002). The shelf life of buckthorn fruits is short, especially, at ambient temperature (Pareek et al. 2009). Deterioration of fruit quality during storage is mainly due to relatively high metabolic activity under unsuitable storage condition (Fattahi et al., 2010). Postharvest application of calcium has a potential role in keeping quality and prolonging storage life of fruits by delaying senescence and reducing respiration rate (White and Broadley, 2003; Lester and Grusak, 2004; Bhattara and Gautam, 2006). It is well known that the role of calcium is to delay senescence in horticultural crops (Misra and Gupta, 2006; Shirzadeh et al., 2011; Sohail et al., 2015). Liu et al. (2017) reported that treatment with 1% Ca followed by cold storage at 5°C significantly improved apricot fruit quality and shelf life. In addition, the application of CaCl2 significantly decreased weight loss, TSS, total sugar and TSS/acid ratio, while ascorbic acid and fruit firmness increased with CaCl2 treatments (Jan et al., 2015, 2016). In addition, CaCl2 at 2% and chitosan at 1% concentrations proved to be effective in reducing weight loss, decay percentage and maintaining maximum firmness and prolong shelf life of peach fruits during cold storage (Abdel Gayed et al., 2017). There is little information on the storage of fruits. Therefore, this study aimed to investigate the impact of postharvest application of calcium chloride on Nabaq fruits, in extending the self-life of buckthorn (Nabaq) fruits and on the fruit quality during cold storage.

This study was conducted in 2016/2017 at College of Agricultural and Food Sciences, King Faisal University, KSA. Fruits were collected in February, from a private orchard at Alqatif, Saudi Arabia. Fruits were then transferred to laboratory. Fruits were sorted and fruits free of any damage, unripe or any defects were used. Fruits were divided into 3 groups, each group contained 300 fruits for each treatment in three replicates and dipped in two CaCl2 (Sigma-Aldrich, Germany) solutions (2 and 4%) and in distilled water as a control treatment for 10 min. After that, they were dried for 24 h at ambient temperature. Subsequently, they were packed with ventilated polyethylene bags and then stored at 2°C and 90% RH (Shirzadeh et al., 2011) for 5 weeks. After 7, 14, 21, 28, and 35 days, 20 fruits per treatment were used for fruit quality evaluation. The physicochemical analysis for example weight loss, TSS, ascorbic acid content, fruit firmness and peroxidase activity were determined.
Physicochemical analysis
The weight of fruits was recorded after treatments (initial weight) and after that, it was weekly recorded and the variation in weight loss was expressed as a percentage of accumulative weight loss from the initial weight of the fruits. Total soluble solids content (Brix) in the fruit juice was determined using of a hand Refractometer (Atago Co., Tokyo, Japan) and the value reported as degree Brix. Fruit firmness was determined using Digital Fruit Firmness Tester, Penetrometer (FHP-803, Agriculture Solutions LLC, USA) fitted with an 8 mm diameter flat tip and expressed as kg/cm2. Measurements were done with three fruits. Ascorbic acid content (mg 100 g-1 fresh weight) was measured by titration with 2,6- dichloroindophenol dye that turns to pink color according to AOAC (2006). Peroxidase activity was determined according to Chance and Maehly (1955). 1 g of the fruit tissue after peeling was homogenized in a mortar with ice 200 mM potassium phosphate buffer (pH 7.0) containing 5 mM Na2EDTA, 10 mM Na2S2O5 and 1% polvinylpyrrolidone. Solution was centrifuged (15,000 ×g, 15 min) then supernatant was utilized for POD activity determination.
Statistical analysis
Data were subjected to analysis of variance (ANOVA) using the statistical software SPSS (SPSS Inc., Chicago, USA). Least significant difference test (LSD) at P<0.05 was used for the comparisons among treatment means.

Weight loss
The results in the Figure 1 shows weight loss during cold storage of untreated fruits as compared to fruits treated with 2 and 4% CaCl2. But, weight loss of control fruits at the end of experiment (35 day) was higher (2.65%) than fruits treated with CaCl2 (2.31 and 1.93%). CaCl2 solution at both concentrations reduced weight loss in comparison with that of the control. All fruit samples recorded a rapid loss of weight at the first week then a gradual reduction was observed during storage (Figure 1). This might be due to a decline in respiration rate and less moisture loss from the fruits during storage. Fruit treated with 4% CaCl2 recorded the lowest weight loss as compared to the control. During last two weeks of the experiment, untreated fruits recorded higher weight loss than the treated ones (Figure 1). The low weight loss recorded by CaCl2 treated fruits could be related to the network formation by Ca and pectin in the fruit cell wall to restrict moisture loss (Genanew, 2013). Previous studies indicated that fruits dipped in calcium chloride solutions were the most effective in decreasing weight loss in comparison with the control (Mahajan and Dhatt, 2004; Sohail et al., 2015). 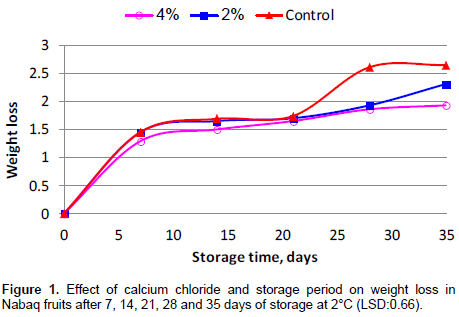 Total soluble solids (TSS, Brix)
Initially, the total TSS content of fruits was 10.2%. Results showed an increasing trend irrespective of treatments until second week and then decreased during storage period in all treatments from 10.2 to 9 for the control and from 10.2 to 9.6 and 9.2 for 2 and 4% CaCl2 treatment, respectively. The increasing TSS content until second week was likely due to concentrated juice content due to dehydration during storage (Akhtar et al., 2010). Figure 2 shows that application of calcium chloride had a slight effect on TSS content during storage and the differences were not significant. 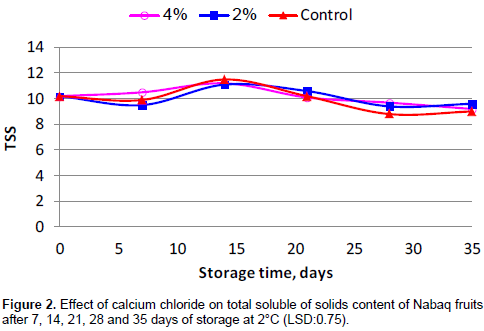 Fruit firmness
It is clear from Figure 3 that there was a general increase in fruit softening in all the treatments. However, fruit dipped in CaCl2 solutions had the highest firmness at the end of storage period as compared to the control treatment. At the end of the experiment, fruits treated with 2 and 4% CaCl2 recorded a decrease of 26.1 and 20.4% in firmness, respectively, against 40.9% for untreated fruits. However, the highest fruit softening detected in the control may be due to the quick metabolic processes (breakdown of starch and proto-pectin to sugars and pectic acid, respectively) in comparison with the treated fruits. In addition, Anthon et al. (2005) reported that the interaction of calcium with pectin is known to be the mechanism for the calcium-firming role. Previous investigations with different crops indicated that the softening of fruits treated with different concentrations of CaCl2 decreased but firmness was kept during storage (White and Broadley, 2003; Shirzadeh et al., 2011). 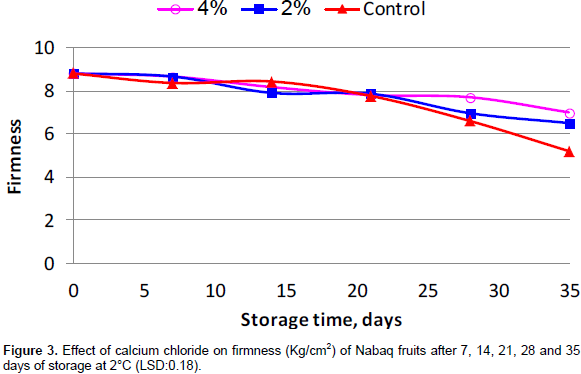 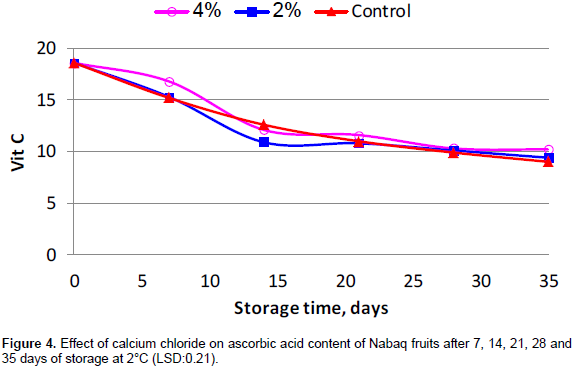 Peroxidase activity
Results in Figure 5 show that the storage time has a significant effect on peroxidase activity (POD). The highest POD activity was found in the control fruits as compared to fruits treated with CaCl2, while lowest POD activity was recorded in treated fruits. In this context, this result is in line with the results reported by Shirzadeh et al. (2011) in apple. In addition, Lamikanra and Watson(2001) indicated that the level of oxidative stress in cut fruits was related to ascorbate dependency of peroxidase enzymes. However, calcium appears to be necessary for post-harvest treatment of some fruits, since is operoxidase could cross-link the chains of polygalacturonan (Penel et al., 1999). 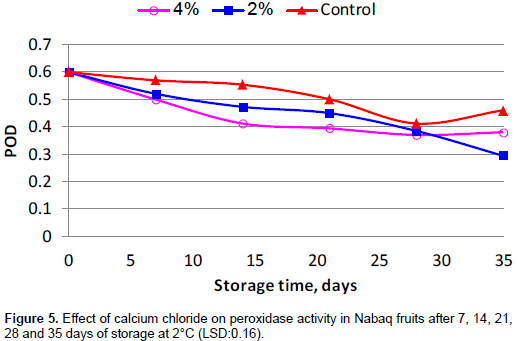 The author thanks Dr. Tarek A. Shalaby, Professors of Horticulture Science, for manuscript reviewing and improvement.