Solenostemon rotundifolius [(Poir.) J. K. Morton] (Lamiaceae) is commonly called Fabirama, Frafra potato or Innala. It is a tuber crop cultivated in many countries in Africa and Asia. Its tubers contain significant rate of carbohydrates, proteins, fibers, vitamins and antioxidants. Besides its nutritional attributes, S. rotundifolius has also strong agronomic and economic potentialities and could be financially rewarding to the farm economy. However, S. rotundifolius is currently a minor crop in African agro ecosystem. It is a priority to contribute to a better preservation and a sustainable use of its genetic resources. Understanding morphological variability is a key step for S. rotundifolius genetic resources management. Previous studies identified three morphotypes based on tuber skin color but a complete description of these morphotypes is not yet done. This study is a contribution to a better description of the main morphotypes of S. rotundifolius cultivated in Burkina Faso. Three accessions representing three morphotypes were described based on twenty five qualitative morphological traits assessed at different stages of plant growth. Significant variability between the morphotypes was observed for young plant color, leaves morphology, color and form of inflorescence as well as tuber skin and flesh color. This work provided useful tools for the characterization of S. rotundifolius genetic resources.
Key words: Frafra potato, neglected crop, diversity, qualitative morphological traits, Burkina Faso.

Solenostemon rotundifolius [(Poir.) J. K. Morton] (Lamiaceae), is commonly called Chinese potato, Innala, Hausa potato, Zulu round potato, Sudan potato, Saluga, Fabirama or Frafra potato. It is believed to have originated from Central or East Africa but spread throughout tropical Africa and  into  South-east Asia.  It  is  cultivated as tuber crop in many African countries including Burkina Faso, Ghana, Nigeria, Togo, Mali (in west Africa), Cameroon and Chad (in central Africa) and some parts of South and East Africa (Schippers, 2000; Gouado et al., 2003; Sugri et al., 2013). In Asia, S. rotundifolius is reported to be cultivated in Sri Lanka, South India and Java (Jayakody et al., 2005).

Besides its nutritional attributes, S. rotundifolius holds strong economic potential and could be financially rewarding to the farm economy (Enyiukwu et al., 2014). During the period of availability, the quantity of tubers sold varied from 16 to 32 Kg/day/person in the main markets of Ouagadougou in Burkina Faso. According to the period and the tubers availability, the prices varied from 1.2 to 3 USD/Kg. This important variation of prices (250%) showed the economic potential of frafra potato (Nanéma et al., 2017).

S. rotundifolius is a very important food crop which can contribute to improving food security. Besides its agricultural importance, it has ornamental, medicinal, culinary and many other uses (Kwarteng et al., 2017). Therefore, as mentioned by Chivenge et al. (2015) and Mamadalieva et al. (2017), there are many neglected crops that have the potential to contribute to food security but investigation should be done to clearly demonstrate their potentialities and the priorities in term of research on these crops.  It is now a consensus that understanding variability within plant genetic resources is one of the key steps for a sustainable use and conservation of its potentialities. Some research activities were already carried out on S. rotundifolius germplasm and contributed to identify a set of useful traits that could be used as descriptors for this crop (Opoku-Agyeman et al., 2007;  Nanéma et al., 2009). Some other works focused on the identification of the main morphotypes within S. rotundifolius genetic resources based on tuber skin color (Prematilake, 2005; Sugri et al., 2013).

A description based on one trait could lead to some confusions between the morphotypes. The objective of this study is to contribute to a better description of the main morphotypes of S. rotundifolius cultivated in Burkina Faso based on a set of qualitative morphological traits. This will give some useful tools for the identification of the morphotypes for research activities on agronomic, economic or nutritional potentialities of S. rotundifolius.

Three accessions (E02, E35 and E20) representing three morphotypes of S. rotundifolius (respectively A, B and C) were used for this study (Table 1). These accessions were identified based on morphological variation observed during our previous research on S. rotundifolius genetic resources. The accession E02 was collected in the province of Passoré in the North region of Burkina Faso. The accessions E35 and E20 were collected in the province of Nahouri in the South region of Burkina Faso. For each accession, 30 tubers were randomly selected for the experiment (Table 1).

The research was carried out in the research farm of the Faculty of Earth and Plant Sciences of the University Ouaga I Joseph KI-ZERBO in Ouagadougou (12°21′56″ N; 1°32′01″ W). A total rainfall of 665.1 mm was registered during the period of the experiment (July 2016 to January 2017). The experiment was laid out in Fisher blocks with three replications. The replication consisted in three lines of height plastic buckets perforated at the bottom to improve drainage. Each plastic buckets (9 L) contained a mix of sun (1/3) and potting soil (2/3). The spacing was 50 cm between the lines, 40 cm between the plants and 50 cm between the blocks. One tuber was planted per bucket on 25 July 2016. An additional irrigation was bring after the rainy season from October 2016 to January 2017. 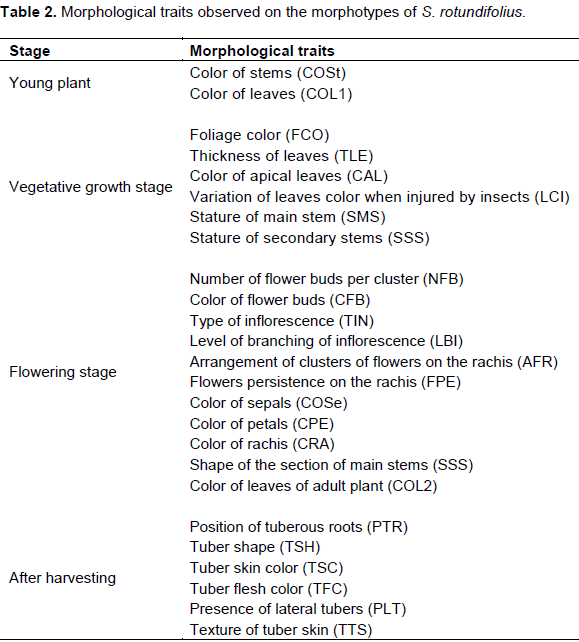 Morphological traits observed at flowering stage and after harvesting

Variability of the morphotypes at juvenile stage 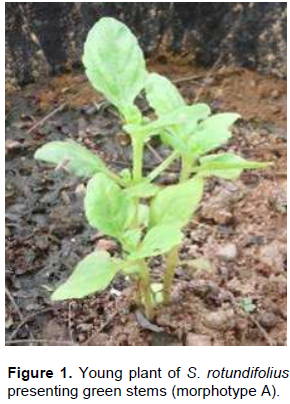 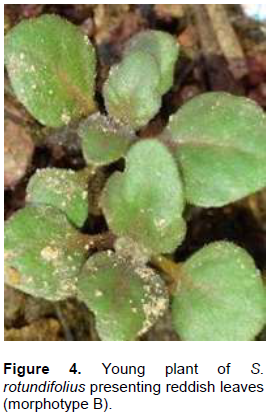 Variability of the morphotypes at vegetative growth stage 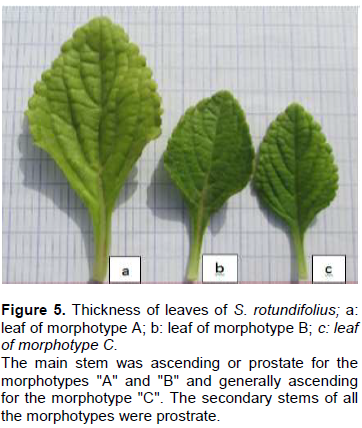 Variability of the morphotypes at flowering stage

Variability of the morphotypes for the morphology of the tubers 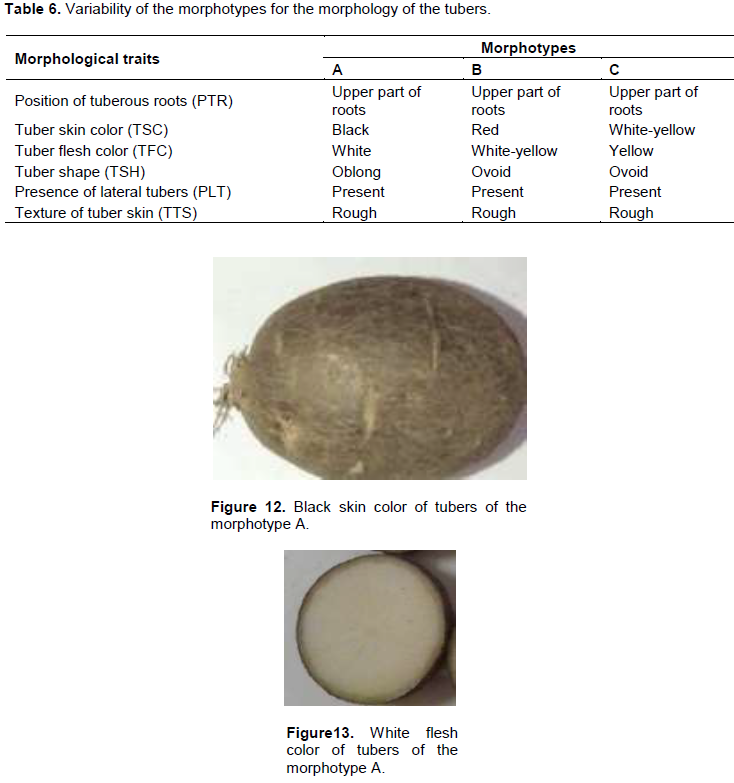 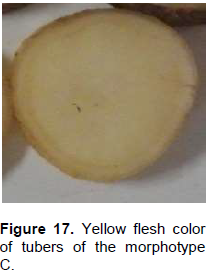 Three morphotypes of S. rotundifolius were described based on morphological traits observed on leaves, stems, inflorescences and tubers. At juvenile stage, the presence red coloration on young plant was identified to be the main difference between the  morphotypes. The variation  of young plant color was also observed by Nanéma et al. (2009) as a discriminant traits within S. rotundifolius genetic   resources.  According   to   Price   and  Sturgess (1938), the reddish color observed on Lamiaceae species are due to the presence of anthocyanins (mainly cyanidine saccharides).

During the vegetative growth stage, the main variation was observed for leaves thickness and the stature of main stem. All the morphotypes produced thick leaves. As suggested by Edison et al. (2006), leaves morphology is an important parameter for water regulation in plant tissues. The strong thickness of leaves of the morphotype “A” could be considered as a particular adaptation potential of this morphotype to water scarcity conditions. Besides the leaves morphology, the stature of stems was identified as a discriminant parameter. Previous research activities revealed the presence of pigmentation on S. rotundifolius leaves (Agyeno et al., 2014).

The tubers of all the morphotypes were rough and glabrous. Other research activities in West Africa also mentioned the lack of hairiness on tubers of S. rotundifolius (Opoku-Agyeman et al., 2007; Agyeno et al., 2014).

The described morphotypes were identified in S. rotundifolius germplasm in Burkina Faso. Based on some morphological traits used in previous works, the three morphotypes were reported to be cultivated in West Africa (Sugri et al., 2013; Agyeno et al., 2014). The morphotype “A” and “B” are cultivated in Sri Lanka respectively as “Bola” and “Dik” (Prematilake, 2005, Jayakody et al., 2005). Some research activities highlighted the influence of genetic variability on tuber nutritional, medicinal potentialities and their behavior in conservation (Jayakody et al., 2005; Priya and Anbuselvi, 2013; Parmar et al., 2017; Mamadalieva et al., 2017; Azad et al., 2017). A clear classification of accessions used in future research on S. rotundifolius could contribute to a better analysis of the results. This include nutritional, agronomical and economical potentialities as well as genetic diversity.

Future research activities could also be focused on the existence of variability within the morphotypes. Other aspects could be the description of flower morphology. Similar studies already led to the revision of Borassus classification (Bayton et al., 2006).

This work was supported by the University Ouaga I Pr Joseph KI-ZERBO.