Farmers participation in the process of on-farm research does not only enrich the speed up of information gathering, but also result in large scale adoption of the product of research. A small farmer deals with a variable environment and has multiple production objectives that will affect his or her choice of crops and selection of genotypes. In areas where farmers are unfamiliar with available improved varieties, there is need of conducting effective variety evaluations with farmers. The usefulness of the participatory approach for identifying cultivars for harsh environments, which are difficult to replicate in research stations, has been recognized by the crop breeders. Participatory plant breeding/selection has shown success in identifying more number of preferred varieties by farmers in shorter time (than the conventional system), in accelerating their dissemination and increasing cultivar diversity. This paper describes how plant breeders and farmers worked together to test and selected farmers preferred pearl millet varieties; PE05684 and PE05532 from a diverse pearl millet accessions in a participatory varietal selection program conducted across some states of Northern Nigeria.

Pearl millet [Pennisetum glaucum (L.) R. Br.] provides diet for over 40 million people who live especially in the arid and semi-arid regions of Northern Nigeria. With an average annual production of 3.8 million tons, Nigeria ranks second after India in global millet production (FAO, 2012). In Nigeria, the crop can be used for a variety of purposes. The flour is processed into thick porridge called ‘tuwo’ served with traditional vegetable soup and fried snack called ‘Masa’ and non-alcoholic beverages called ‘fura’.
Addressing poverty in rural Semi-Arid West-Africa and especially Nigeria requires interventions in the dry-land cereal production systems that continue to provide the basis of life in the region. Farmers’ prospects are more at risk in this zone due to both the vagaries of weather as well as their disadvantaged access to markets, especially opportunities for marketing grain surpluses which hinder adoption of improved varieties. In areas where farmers are unfamiliar with available improved varieties, there is need of conducting effective variety evaluations with farmers. This ideology was based on reconnaissance survey which indicated that, the uptake and sustained use of improved varieties is constrained by lack of awareness of the improved varieties, traditional values, seed unavailability, early maturity, bird damage, and fertilizer unavailability.
In a world of limited resources, research must be cost-effective. The usefulness of the participatory approach for identifying cultivars for harsh environments, which are difficult to replicate in research stations, has been recognized by the crop breeders (Gowda et al., 2000). Interestingly, farmers are increasingly participating in agricultural research as scientists and development workers become more aware of the philosophy of 'farmer first’ and its effectiveness. Participatory plant breeding/selection has shown success in identifying more number of preferred varieties by farmers in shorter time (than the conventional system), in accelerating their dissemination and increasing cultivar diversity (Weltzien et al., 2003). According to several authors (Kornegay et al., 1996; Van Oosterom et al., 1996), it is well suited for niche breeding, or development of varieties that perform well in specialized environments.
Farmer participation in the breeding of crop varieties for low-resource farmers is regarded by some as necessary to help ensure acceptance and eventual adoption (Franzel et al., 1995; Gyawali et al., 2007; Maurya et al., 1988; Mekbib, 2006; Prain et al., 1992).
Thus farmers’ requirements have to be identified first so that they can be given more appropriate genetic materials to test based on the following potentials inherit in participatory selection.
(1) Farmers participation in the process of on-farm research does not only enrich in the speed up of information gathering but also result in large scale adoption of the product of research.
(2) It gives the breeder a great deal of confidence when presenting the varieties to the release committee.
(3) It provides impetus for release if popularity among farmers is documented.
(4) It helps in overcoming the initial inertia in bulking and distribution of newly released varieties.
By making selection criteria more relevant to end user needs, it can reach poor households that have not yet benefited from multiple varieties, increases the benefits and is more effective at reaching women and the poor (Michael and Mauricio, 2004). This provides a rationale for on-farm farmers’ participatory variety evaluation and selection.
This paper describes how plant breeders and farmers worked together to test and selected farmers preferred pearl millet varieties from a range of pearl millet accessions in a participatory varietal selection program.
The specific objective of this project was to select from diverse and  productive  pearl  millet  lines  received  from ICRISAT Niamey during the BMZ and IFAD projects, that are adapted to local conditions and accepted by farmers and consumers’ at large using farmers’ indigenous knowledge and breeders’ scientific approach.

Priority ranking
Result from priority ranking from some selected sampled locations (Tikau, Gubio and Gwoza) showed that earliness and yield ranked 1st and 2nd, respectively across all the sites (Table 1) due to the following reasons:
(1) For pearl millet, it is the first crop to be planted at the onset of rains and later intercropped with either cowpea or groundnut.
(2) Early maturing cultivars escape bird’s damage at migration and striga infestation.
(3) Drought escapes, since most people living in these areas where pearl millet or sorghum is being produced have short rain periods ranging from 75 to 100 days.
Field data
Data for 2008 cropping season for some selected locations is presented. Data analysis of  the 2008 participatory selection, showed that farmers across sites gave the highest scores to the 2 most common entries; PE05684 and PE05532 of 76 and 80% acceptance, respectively (Table 2), characterized by earliness, bold grain, stout stalk, compact panicle, less downy mildew, and no insect pest attack. Accordingly, most farmers expressed that, these varieties met their earlier criteria from priority ranking (Table 1), that is, earliness and yield ranking 1st and 2nd, respectively. PEO5984 though early scoring 45% acceptance was considered as alternative choice due to its short panicle which may not be suitable for bundling.
To confirm the farmers choice of lines selected, data analysis for the locations combined is presented on Table 3. Grain yield ranged from 1829 to 4366 kg/ha with PE05631×PE05393 having the highest grain yield of 4366 kg/ha. Days to 50% flowering ranged from 52 to 88 days with PEO5984 being the earliest (52 days to 52% flowering). PE05684 and PE05532 recorded grain yield of 3502 and 4046 kg/ha, respectively with both having a yield advantage of 30% over  the  local  check  confirming the farmers earlier choice of these lines.
PE05631×PE05393 with the highest grain yield of 4366 kg/ha was not selected due to variability within plot as a result of segregation for days to 50% flowering. Plant height ranged from 175 to 310 cm with mean of 272 cm. PE05684 and PE05532 selected by farmers were of medium height of 228 and 303 cm, respectively, thus good stalk height for fencing and roofing purposes. Downy mildew infestations were generally ≤1% indicating the genotypes are moderately resistant across the sites tested. 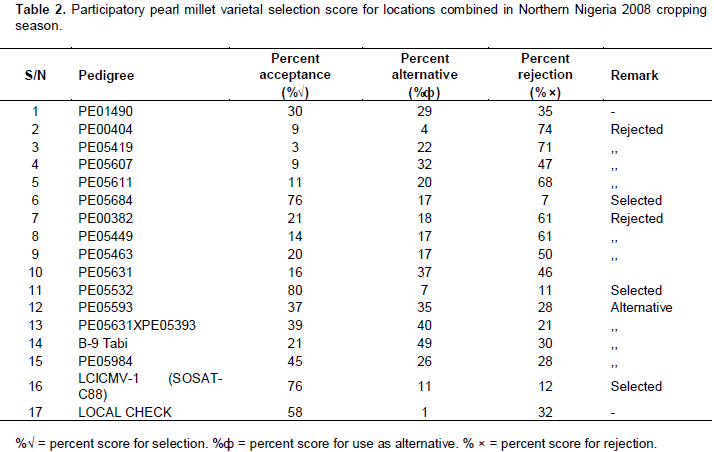 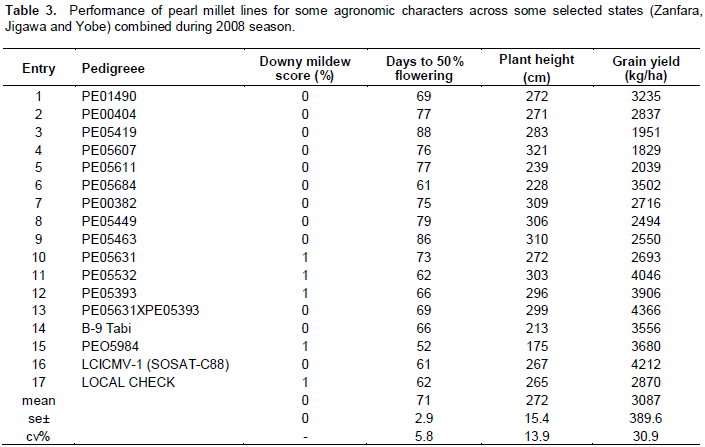 Result from both participatory and field evaluation suggest that participatory variety evaluation offers the possibility of bringing modern and traditional plant breeding traditions together to increase the usefulness of new crop varieties to farmers, especially small-scale farmers working in stress environments with limited external inputs.
It is however, suggested that the medium maturing PE05684 and PE05532 which recorded grain  yield  of 3502 and 4046 kg/ha, respectively can further be subjected to on-farm adaptive trials.