The African maize stem borer (Busseola fusca) is one of the important biotic constraints for maize production in sub-Saharan African. This study determined the spatial distribution and sampling sizes for African maize stem borer in Southern Ethiopia. Twenty four maize farms were visited in 12 localities at three growth stage of maize. Data were collected on the number of infested and not-infested plants, and the number of larvae and pupae. There were variations in the levels of infestations and population density of B. fusca in the study areas and years. Percent infestation at mid-whorl stage of maize ranged from 13.6 to 25.9% and 19.5 to 41.4% in 2015 and 2016, respectively. Infestation increased through time and at harvesting stage reached ranges of 36.8 to 68.8% in 2015 and 65.5 to 80.7% in 2016. The optimal sample size for four fixed precision levels of 0.10, 0.15, 0.20 and 0.25 were estimated with Iwao’s regression coefficients. The distribution pattern of B. fusca varied between maize growth stages, locations and years. At mid-whorl stage of maize, B. fusca infested plants were aggregated but in both at silking and harvesting stage uniformly distributed. At mid-whorl as well as silking stage of maize B. fusca larvae were aggregated. But, larvae at harvesting stage and pupae in both silking and harvesting stages of maize were randomly distributed. For 10% infestation, which is considered as action threshold level for stem borers management on maize, 22 sampling units (660 plants) at the precision of 20% are required.

Among the biotic factors, insect pests, particularly stem borers are responsible for the low yield of maize crop (Getu et al., 2001; Wale et al., 2006). Yield losses in Ethiopia due to stem borers vary with agroecology, but generally range from 15 to 100% depending on infestation by the pest species, crop and crop growth stage attacked (Wale et al., 2006). In East Africa, the noctuid Busseola fusca (Fuller) and the crambid Chilo partellus (Swinhoe) are the most important insect pests associated with maize (Mwalusepo et al., 2015). The two lepidopterous stem borers are economic pests of maize in Ethiopia (Wale and Ayalew, 1993; Wale al et., 2006). Gebre-Amlak (1985) reported that C. partellus was a predominant species at low elevation (less than 1700 m) and B. fusca was dominant at elevations between 1160-2600 m.a.s.l. and cooler areas of Ethiopia.

Management method cannot be implemented effectively without accurate estimates of insect population and its effects on yield (Nabil, 2010). To estimate insect density, sampling time, sampling unit and sampling size are crucial (Southwood and Henderson, 2000). The number of samples size and units could be varied with insects    being    sampled,   their    distribution    patterns (Southwood and Henderson, 2000); purpose of sampling, infestation pattern, severity and economic considerations (Frisbie and Whorter, 1986). Too few sample sizes will reduce the value of the estimate (Vlug and Paul, 1986) and too many will increase the cost of the program (Blackshaw and Hicks, 2013). Therefore, the present study was designed to determine the spatial distribution patterns and the sampling size for monitoring of B. fusca on maize.

The study was conducted in Wolaita, Sidama and Gurage zone (Table 1) which are found in southern Ethiopia during 2015 and 2016 main cropping seasons (May- October). The number of districts, localities, sampling farms, sampling plots and plants in each zone are described in Table 2. Districts and localities were selected based on road accessibility and intensity of maize production. 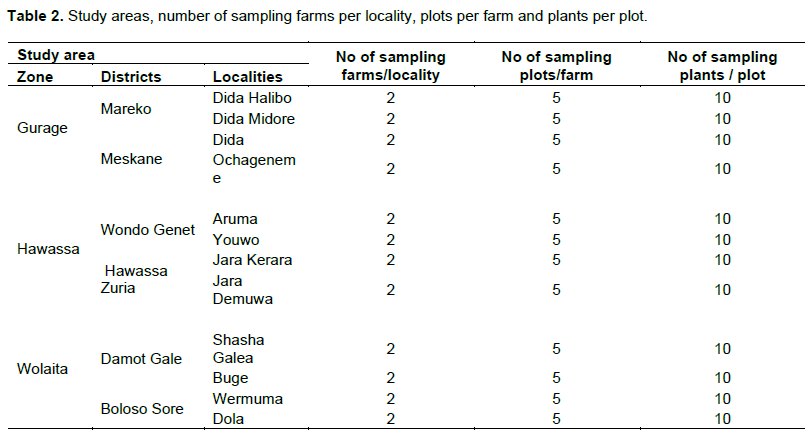 In this study, twenty four maize farms in 12 localities having similar inputs and management practices were covered. The farms did not receive any insecticide treatment and grew the popular maize varieties BH540 and Shone. In each maize farm five sampling spots with a size of 9m2 each were measured in ‘X’ pattern at mid-whorl, silking and harvesting stages of maize. In each spot, the total number of plants (30 plants on the average) and those infested by stem borers (characterized by dead heart, scarified leaves, and larval entry and exit holes in stems, the presence of frass) were recorded and percent of infestation (%) calculated using the formula

Where, IP = infested plants, TP = total plants. When infestations were observed, ten plants were randomly selected from each spot and dissected to record the number of larvae and pupae. The same fields were used for samplings at different stages of maize.

The spatial distribution pattern of B. fusca was determined by using four indices, namely Taylor’s power law, Iwao’s mean crowding regression, Lloyd's mean crowding, and index of dispersion. Percent of infested plants and numbers of insects per spot were used.

is sample mean, a is intercept and b is the slope. When  b=1,  b < 1 and  b> 1 the distribution is random, uniform and aggregated, respectively.

Where α indicates the tendency to crowding (positive) or repulsion (negative)  and  β =1, β < 1 and β > 1 the distribution is random, uniform and aggregated, respectively.

, where n denotes the number of samples. The index was tested by Z value as follows:

is the sample mean. To remove the effect of changing in density, the ratio of mean crowding to the mean was used and X*/

At mid-whorl stage of maize, the number of required sampling  units per field were determined using proportion of infested plants and Kuno (1969) formula n = (a+1/

means of infestation; a and β are coefficients obtained from Iwao’s regression, D = precision level. The allowable precision levels (10, 15, 20 and 25 %) in ecological research (Southwood and Henderson 2000) were used.

Levels of infestations and population density of B. fusca larvae and pupae

Distribution of infested maize plants with B. fusca

In both years, at mid-whorl stage the index of dispersion and Lloyd's mean crowing (S2/

) for percent number of  infested plants  were greater than one and the coefficients of Taylor’s power law (b) and Iwao’s patchiness regression (β) were significantly greater than one (Table 4). Index of dispersion (S2/

) from 1.18 to 1.72; coefficients of Taylor’s power law (b) from 1.10 to 1.91 and Iwao’s regression (β) from 1.40 to 2.40; whereas at silking as well as maturity stage of maize, all the distribution indices were less than one. The study showed that at the mid-whorl stage of maize, the distribution pattern of B. fusca infestation was aggregated and uniform at both silking and harvesting stages of maize. 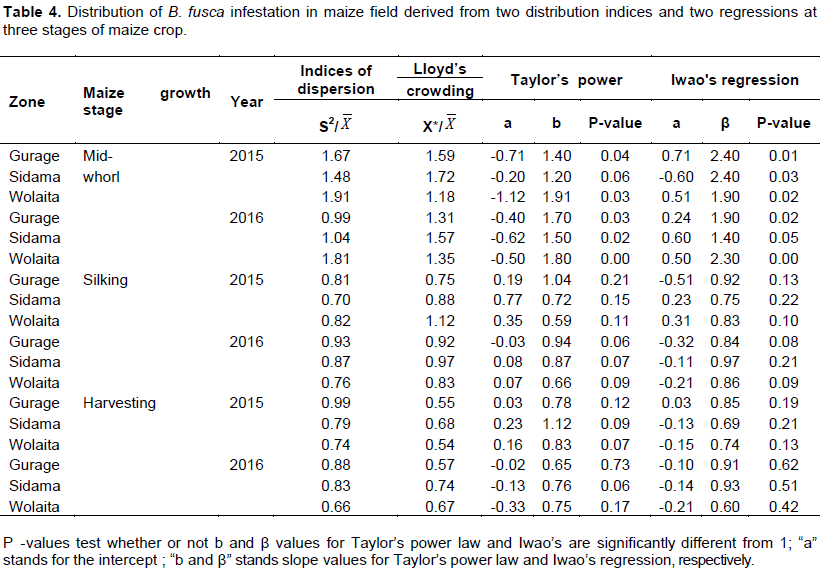 Distribution of B. fusca larvae at mid-whorl stage of maize

During the study periods, B. fusca was the only stem borer species recorded in the three zones of the study areas. In both years, at the mid-whorl stage of maize, the index of dispersion (S2/) for B. fusca larvae was greater than one (1.46 to 2.64); Z value was greater than 1.96 and Lloyd’s mean crowding (X*/

) ranged from 1.10 to 1.51 (Table 5). The coefficients of Taylor’s power law (b) and Iwao’s (β) were significantly greater than one and ranged from 1.82 to 3.88 and 1.14 to 1.7, respectively. All the dispersion values indicated that at the mid-whorl stage of maize B. fusca larvae had an aggregated distribution. 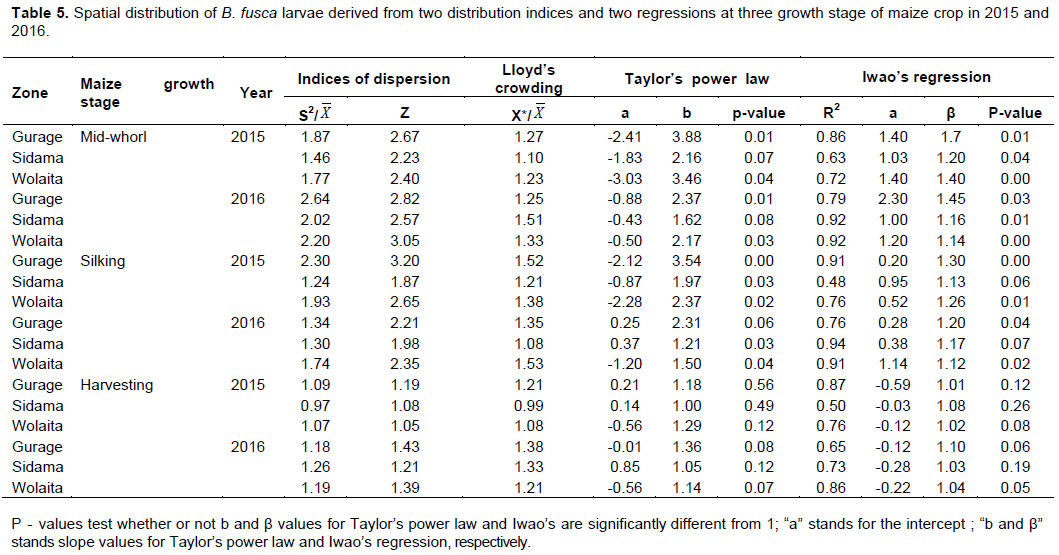 Distribution of B. fusca larvae and pupae at silking stage of maize

) ranged 1.08 to 1.52 and the Taylor power coefficients (b) ranged from 1.21 to 3.54. The slopes of the regression lines for Iwao’s mean crowding regression were also numerically greater than one, ranged from 1.2 to 1.4. The dispersion values indicated that B. fusca larvae were aggregated at silking stage of maize. Index of dispersion (S2/

Distribution of B. fusca larvae and pupae at harvesting stage of maize

Unlike mid-whorl and silking stages, at harvesting stage of maize B. fusca larvae distribution indices (S2/

) were near to one; Z values less than 1.96; Coefficients Taylor power (b) and Iwao values (β) were not significantly different from one (Table 5 and 6). The larvae index of dispersion (S2/ 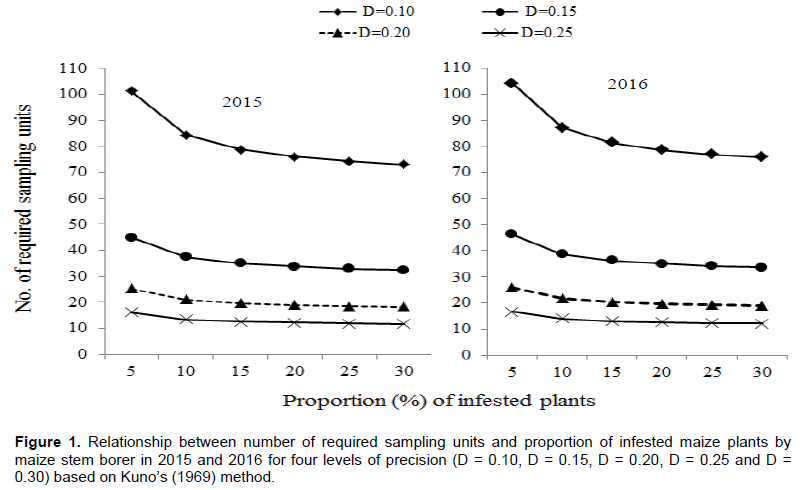 Infestation  of  maize  with  B.  fusca  was  aggregated  at mid-whorl stage but uniform at silking and maturity stage of maize. B. fusca larvae were aggregated at both mid-whorl and silking stage of maize. The aggregated distribution pattern of distribution pattern during season could be caused by changes in population density or movement of larvae. Busseola fusca females oviposit a highly  variable number (from 100 up to  800)   of   round   and  flattened  eggs  in  batches (Kruger et al., 2012); larvae migrate to neighboring plants throughout the larval stages (Van Rensburg et al., 1987; Calatayud et al., 2014). Sun and Du (1991) reported that rice stem borer (Chilo suppressalis) larvae have an aggregated distribution pattern the active seasons but the dispersal rate of larvae in changes with developmental stages. The numbers of the required sampling units  are dependent upon the insects being sampled, their distribution patterns,  and  other  factors  (Pedigo and Van Schaik, 1984). The required sampling size typically increased with higher precisions and for lower levels of infestations. An action threshold for B. fusca 10% infested plants has been recommended (Ong’amo et al., 2016; Van Rensburg et al., 1988). For 10% infestation  14  to 85 sampling units were required for precision ranges of 10 to 25%. A 25% level of precision is acceptable for scouting programs (Southwood, 1978). Taking a higher precision of 20%, for the 10% infestation 22 sampling units (660 plants) are required.  In this study the required sample units were estimated with Kuno (1969)’s method which is based on Iwao’s patchiness regression. Many studies used Taylor’s power to estimate sample sizes. The Taylor’s method reduces the necessary sample size when compared with Iwao’s method (Darbemamieh et al., 2011; Ifoulis and Savopoulou-Soultani, 2006). Hence, the sample size recommended in this study could be considers as optimum.

Techniques of scouting which are easy to follow, save time and effort, and avoid needless insecticide applications are required. Although various studies have established  the  relationship between density of larvae of stem borers and yield loss in maize, count of larvae which employs destructive sampling is time consuming and not feasible to scout and decide on the management of stem borers. Van Rensburg and Pringle (1989) developed a sequential sampling method for egg surveys (based on the negative binomial distribution) and the method saved on time and effort required for sampling while allowing for more timely application of insecticides. We used presence and absence of infestation on maize by the stem borer which is easy to execute in the field.

This study concludes that, stem borer, B.  fusca is a major constraint for the production of maize in southern Ethiopia. B. fusca has not one type of distribution pattern for all of its life stages. Infestation of maize with B. fusca is aggregated at mid-whorl stage but uniform at silking and maturity stage of maize. B. fusca larvae had an aggregated pattern at both mid-whorl and silking stage of maize and random at harvesting stage. At silking and harvesting stage of maize the distribution pattern of B. fusca pupa is random. The required sampling size typically increased with higher precisions and for lower levels of infestations. For 10% infestation, which is considered as action threshold level for stem borers management on maize, 22 sampling units (660 plants) at the precision of 20% are required.

Funding for this project was provided by the Ethiopian Ministry of Education for which the authors express their appreciation.