Studying the volatility effect of agricultural exports on agriculture share of GDP: The case of Egypt

The Egyptian economy depends basically on agriculture, Suez Canal revenues, tourism, taxation, cultural and media production, natural gas exports and remittances of more than three million Egyptians abroad (mostly in the Gulf State). Agriculture plays a vital role in Egyptian economy. The agricultural sector employs about 30% of the total labor force, contributing about 14.8% of GDP, and agricultural exports contribute about 20% of total good exports, making the agricultural sector a significant national income resource (State Information System, 2012). Agriculture can salvage the prevailing economic situation under instability (Raza et al., 2012; Shirazi and Manap, 2004; Jatuporn et al., 2011; Haleem et al., 2005). Before 2011, The Egyptian economy is evolving and this evolution only appeared on the rich and did not reach the poor, who suffer from poverty and lack of food. According to State Information System (2012), poverty increased by 50%, leading to socioeconomic and political instability. These situations led to the explosion of a popular revolution in January 25, 2011.After two revolutions in 25th of January, 2011 and 30th of June, 2013 (Arab Spring revolutions), Egypt suffers from very bad economic situation characterized by high food and energy prices, high unemployment inflation rates, and decline in economic growth rate in most relevant sectors.
These political events showed the fragility of the Egyptian economy, where the Egyptian GDP growth rate decreased from 5.1% in 2010 to 2.2% in 2014; also the inflation increased from 7.1% in 2012 to 10.1% in 2014 (World bank, 2014). Egyptian food prices increased by 17.7% from the 1st week of January 2011 till the 1st week of December 2013 (Egyptian Food Observatory, 2013). Egypt had before these two revolutions $36 billion of foreign reserves which decreased in 2016 to $16.5 billion (Africanews, 2016). It became necessary that the Egyptian government worked to increase foreign cash flow of by giving more attention to exporting goods, especially agricultural products. Recently, Egyptian economy is suffering from a dollar shortage as a result of reduction in investment in Egypt and demise of tourism, leading to depreciation of currency inflows. Most recent studies assessing the effects of agricultural export on economics have started to gain interest among economists. Many studies found evidence that agricultural export variable has significant effects on economic growth, where it’s one of the most important sources of foreign exchange income that ease the pressure on the balance of payments and create employment opportunities.
Thus agricultural export is considered as a very important one among economic growth contributors. Some economists seem to generally have agreed that exports can have high added value on economic growth, while others did not find much support to the export led economic growth hypothesis. In this paper, the Johansen (1988) co-integration technique based on error correction model was used to investigate the relationship between agricultural exports and agriculture share of economic growth in Egypt. The bivariate models for the pairs of series are modeled by means of a GARCH (1,1) specification in order to allow for time-varying and clustering volatility. This paper is organized as follows. In the next section, a literature review of the effect of the exports and international trade on economic growth using time-series econometric techniques is presented. In section 2, the methodological approach is described. The fourth section is devoted to the empirical implementation to assess relationship between agricultural exports and agriculture share of GDP. The last section in this article offers the concluding remarks and policy implication.

Many empirical analyses have been introduced to assess the international trade effect on the Growth Domestic Product (GDP) in developing countries. Most of these studies rely on two main methodological approaches: they are structural analysis that can be assessed by relying on economic approaches, and econometric analysis of time series data that identify empirical regularities in the data. This paper analysis follows the second methodological approach. Analysis of the time-series data requires studying the statistical properties of these data. Most research studies evidenced the presence of a unit root in the time series data and, when related, to share a tendency to co-move in the long-run (Myers, 1994). This analysis uses error correction model by estimating johansen cointegration techniques and generalized autoregressive conditional heteroskedasticity (GARCH) models. Cointegration and error correction models (ECM) have been introduced in the literature (Engle and Granger, 1987) to characterize nonstationary and cointegrated data and inform both on their short and long-run dynamics. Time-varying and clustering volatility, another common characteristic of time-series, is typically modeled through generalized autoregressive conditional heteroskedasticity (GARCH) models.
While the use of Johansen cointegration (1988, 1991, 1995) methods is common within the financial economics literature; empirical analysis that uses Johansen (1988, 1991) cointegration to assess the link between agriculture international trade and agricultural GDP is very scarce. The Johansen (1988) cointegration test provides a natural way to measure the relationship between two or more variables where the variables are characterized by non- stationary variables, presence of unit root, and near integrated. The Johansen test is considered as multivariate model and can be estimated by using maximum likelihood method. The Johansen’s methodology based on the vector autoregression (VAR) can be expressed as:

Where yt is an n×1 vectors of integrated variables of order one for k>1, and eI are n×1 error terms. Equation (1) can be re-written as: 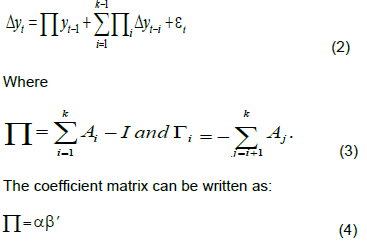 Where a are the adjustment parameters in the vector error correction model or speed of adjustment towards equilibrium and each column of b is considered as cointegrating vector. Where Õ is equal to zero that means the variables tested are not cointegrated, and the variables are to be cointegrated where the rank of Õ ¹ 0, where r is the number of cointegrating relationships, and If the rank of Õ is reduced to be r>n but is not equal to zero, then its determinant is zero. To overcome this problem we can consider eigenvalues to be the estimators of the cointegrating vectors (Sørensen, 2005). Johansen tests were divided into two likelihood ratio tests to assess the null hypothesis of no cointegration against the alternative of the presence of the cointegration of the canonical correlations. These two tests are: The trace test and the maximum eigenvalue test, represented in Equations 5 and 6, respectively. First, the trace was found to maintain equilibrium parity by implementing the Johansen (1988)’s cointegration test. First, the trace test examines the null hypothesis of the rank

coinegrating vectors relative to the alternative hypothesis of

relative to the alternative that  (Hjalmarsson and Österholm, 2007). 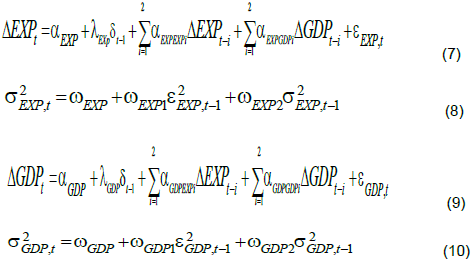 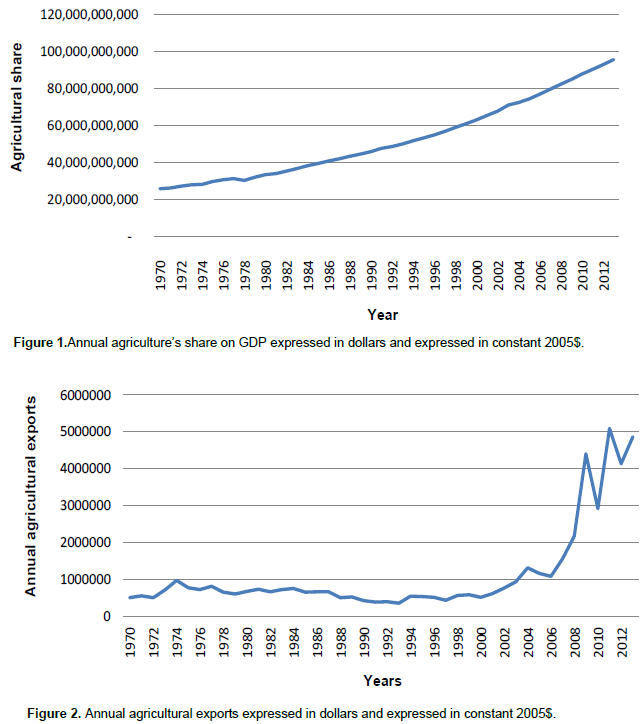 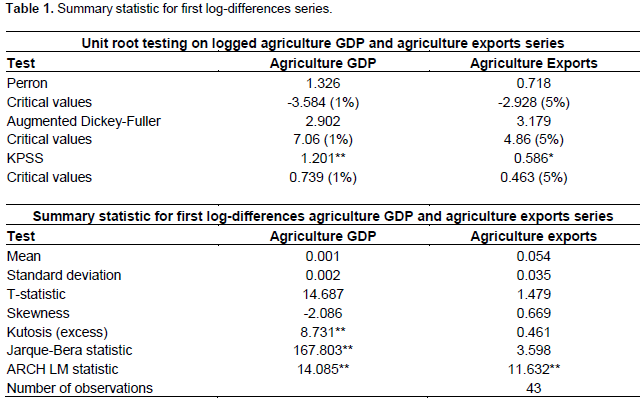 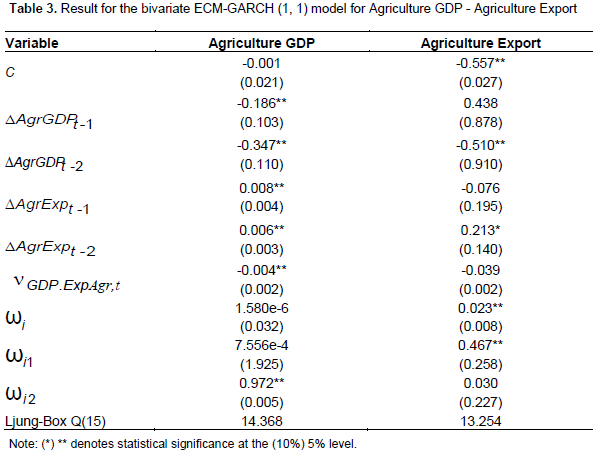 The Ljung-Box test was done using the bivariate model (ECM-GARCH) and the results do not allow rejecting the null hypothesis of no autocorrelated residuals from lags 1 to 15 at 5% level. This implies that the ECM-GARCH is specified well.