Black Bengal goat is a potential animal genetic resource of Bangladesh. The aim of this study was to investigate the genetic improvement of growth rate (GR) in-situ through a community based breeding program under a low input production system. Data on a total of 451 individuals from 2009 to 2015 in three generations were taken. In the community, two breeding strategies (BS); mating among superior bucks and does (BS1) and mating existing does with superior bucks (BS2) were followed. Mating among existing bucks and does (BS3) were considered as test group. The average GR from 0 to 3m, 3 to 6m, 6 to 9m, 9 to 12m and 0 to 12m were 43.05±0.78, 21.27±0.48, 21.42±0.37, 19.42±0.46 and 36.17±0.28 g/d, respectively. GR at different ages differed significantly (p<0.001) for sex, except at 0 to 3m. Generation and BS influenced GR at all ages significantly. Better growth rates were obtained in BS1 progeny and in later generations. The heritability (h2) estimates for GR at different ages ranged from 0.32 to 0.57. The genetic and phenotypic correlations for GR at different ages ranged from 0.02 to 0.87. The average responses for GR varied from 2.31 to 4.52 g/d per generation. It may be concluded that community based breeding program with superior bucks and does is very rationale under low input production system, as it improved growth performance in progressive generations. However, h2 and rG indicated scope of genetic improvement for GR if rigorous culling of inferior does and bucks can be adopted.

The BBG is an important indigenous small farm animal genetic resource in Bangladesh for their attractive flavored meat, quality skin and multiple litter size. However, in most cases multiple kids cannot survive due to poor milk secretion from the udder of the does. On the other hand, their slow growth rates cannot produce substantial amount of meat within very short periods when they get to marketing ages of about 8-12 months. To accomplish the demand of meat, it is essential to improve the genetic potentiality for fast growth rates with higher carcass weight. Importantly, Husain et al. (1996) observed the existence of large variations within BBG population in terms of body weight and growth rate, which may be exploited for their immediate improvement through selective breeding. As BBG are solely being reared by the people for meat production, growth rate could be considered for selection and breeding in genetic improvement program to obtain higher carcass weight. Keeping this in view, this study was conducted to find out response to selection for growth traits of BBG in a community breeding program at three village flocks in Bhaluka upazila of Mymensingh district.

Location of the study

The study was conducted at a rural community level goat flocks of three different villages; Gangatia, Borochala and Pachpai at Bhaluka upazila (sub-district) in Mymensingh district of Bangladesh. Bhaluka is geographically located in between 24°16´ and 24°29´ N latitude and in between 90°14´ and 90°29´ E longitudes. The study area is located at 70 km north from the capital city, Dhaka.

The ecology of the three villages of Bhaluka have same temperature, ranging from 12 (winter) to 33°C (summer), and the annual rainfall averages 2147mm during the study period. High lands available which were reddish in color, some forests were present in Pachpai village. Grazing lands were available in Gangatia, Borochala and Pachpai village for the goat. In the study areas, dogs, wild cats, foxes and snakes were the main predators during grazing of goats.

Selection of sire and dam

Superior bucks and does were selected to establish community foundation flocks in the three villages. The superior bucks were selected from Bangladesh Livestock Research Institute (BLRI), Department of livestock Services (DLS) and simultaneously from the based on physical appearance and daily body weight gains.

Traditional housing with semi-intensive management systems was practiced by the BBG keeper farmers. The bucks and does were allowed to graze separately tethered by rope in naturally available pasture land and adjoining fields of the farmer’s house. Goats were also provided with tree leaves, kitchen waste, leftover of family meals, table salt and cut and carry green grass ad lib during the day time. Goats were allowed to feed on concentrate feed such as rice gruel, rice bran, broken rice, wheat bran etc. during pregnancy and lactation at 200 g/day/animal. The breeding bucks were also fed whole gram at 50 g/day/animal in the morning. Fresh drinking water was also supplied for the goat ad lib. All goats under the project areas were vaccinated and de-wormed routinely against prevalent diseases and parasites.

For mating does with superior bucks, three “Buck Parks” in each village, were established by the foreign aided project. Superior bucks were kept in the buck park most of the time except feeding and exercise for half an hour twice in a day. Two breeding strategy/intervention (BS) were followed: mating among selected superior bucks and does (those supplied to the farmers by the project aid) denoted as BS1 and mating of existing does (owned by the community farmers) with selected superior bucks denoted as BS2. Besides, a test group denoted as BS3 was also observed to compare with other two BS. In the test group, mating was followed among existing does and bucks (owned by the farmers). Only superior males were selected as sire to produce progeny in progressive generations. The selection criteria were based on individual growth and body conformation of their dam.

The study covered various stages of growth rates of BBG in progressive generations. The animals were of different populations and ages as well as both parents and progeny groups. Therefore, data were sufficiently unbalanced and hierarchy in nature. So, statistical design of the study was essentially non-orthogonal factorial in nature. Descriptive statistics, analysis of variance and phenotypic correlations (Pearson’s model) were performed by SPSS 17.0 (1998) package. The significance of independent variables (fixed or non-genetic factors) was tested by least-squares analyses of variance using the general linear model (GLM) procedure as follows:

The genetic parameters including (co)variance components, heritability and genetic correlations were estimated using VCE 4.2.5 (Groeneveld, 1998) package with residual maximum likelihood (REML) approach. For REML analysis, animal model was used to consider sex, generation, breeding strategy and flock as fixed effects. The general form of the animal model was as follows:

The predicted or expected responses to selection in the progressive generations for the economic important traits were estimated using the following formula given by Falconer (1989): 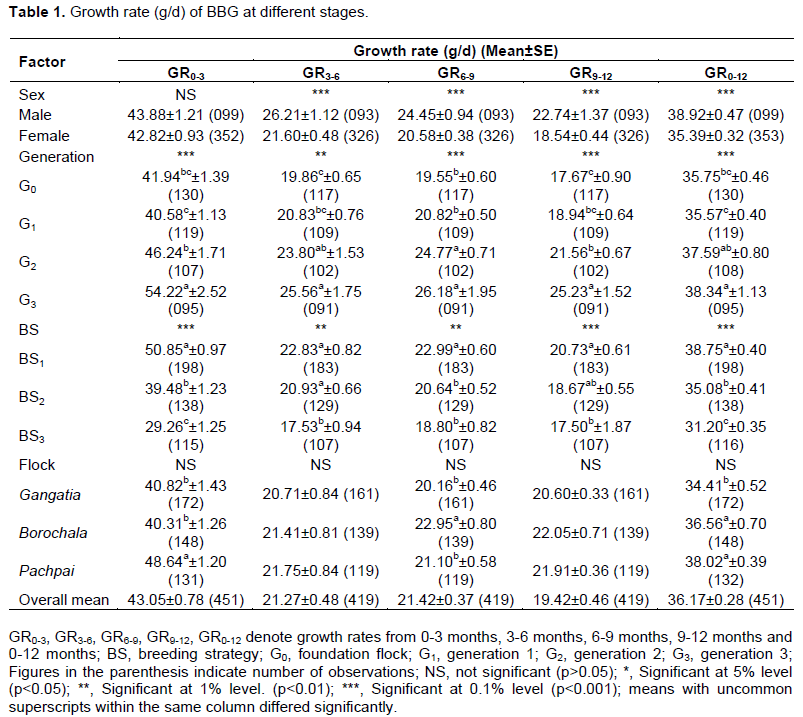 Table 1 shows that sex had high significant (p<0.001) effect on GR (males grew higher than females), except that of GR0-3. Gupta et al. (2016) reported sex to have significant effect on post-weaning growth, while not for pre-weaning growth which is coincided by this study as weaning usually happen within birth to  3 months in goat. Husain (1993) observed that pre-weaning growth rate of kids was affected by sex of the kids. Generation had highly significant (p<0.01; p<0.001) effect on GR at all ages. As expected, growth appears to increase as generation progressed, which is also in agreement with Haque (2014), Akhter et al. (2006) and Amin et al. (2001). This could be due to selection of best parents in the progressive generations. BS had highly significant (p<0.01; p<0.001) effect on GR at all ages. Highest GR was obtained in the population produced from BS1, followed by BS2 and BS3 (Figures 1 and 2). This superiority is due to gene, as superior bucks and does were mated each other in BS1 to produce offspring with higher genetic worth as reflected for other traits also. 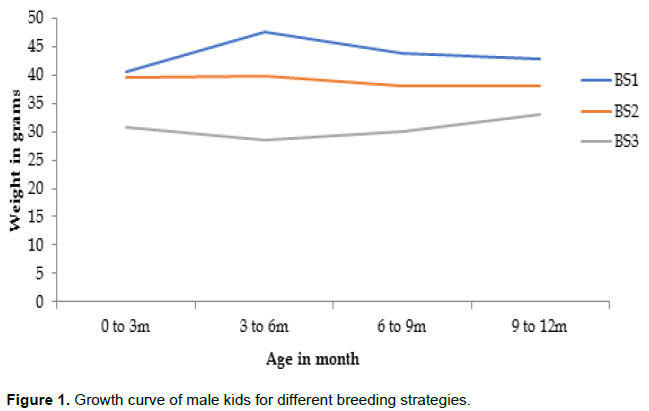 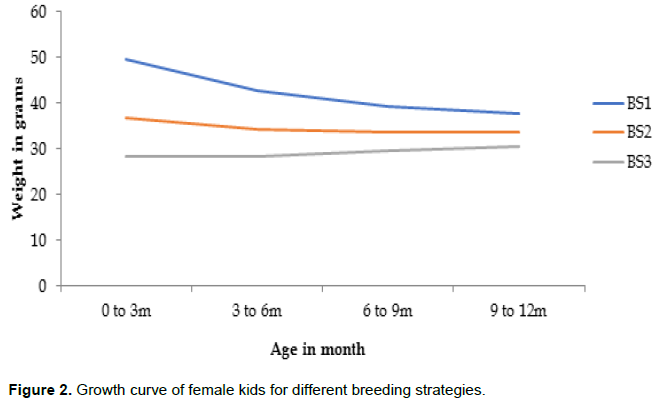 GR at any age did not differ significantly (p>0.05) among flocks, which indicate the unique feature of growth in BBG population and also same feeding and management systems in the rural communities. This is in disagreement by Husain (1993) who observed that pre-weaning growth rate of kids was affected by region, which could be raised due to variations of environmental factor like feeding, care, health status etc.

The differences for the degrees of heritability calculated by different authors for the same traits in goat could be due to difference in breed, location, environment, sample size and methods of estimation. The heritability estimates for GR further reveal that growth of BBG can be improved by phenotypic selection. However, the heritability values obtained in our study indicate that mass selection may be more useful for further genetic improvement of GR in BBG. Furthermore, due to medium heritability for GR at all ages, early selection of individual based on their growth performances for first 3 months may be more helpful for taking  decision  of  selection or culling  and  to reduce feed and management cost of the farmers.

Genetic and phenotypic correlations among growth at different ages

Both genetic (rg) and phenotypic correlations (rp) among GR0-3, GR3-6, GR6-9, GR9-12 and GR0-12 were estimated and are illustrated in Table 3, which shows the enormity of correlations to be very low to medium in extents (rg: 0.03 to 0.87; rp: 0.02 to 0.84) among the pairs of traits. The estimates of both rg and rp were however, positive and showed no genetic antagonisms among the pairs of GR traits. Table 3 also shows that the correlations among GR at different ages decreased, as the time between measurements increased, except between GR0-12 with others. The highest correlation was observed between GR0-3 and GR0-3 (rg =0.87; rP =0.84**). There appears to be very little information available regarding rg and rp among GR in BBG, but available for other types of goat in other countries, which may be compared with this study. Al-Shorepy et al. (2002), Neopane (2000) and Concepta et al. (2008) confirmed that rg and rp between growth traits were positive and medium to high. The rg and rp among GR as obtained in this study are analogous with the finding of Zhou et al. (2014), who also found rg and rp among average daily gain traits to be positive and relatively low for Hainan Black goat in Southern China. Alade et al. (2010) reported low but negative correlations between post-weaning and pre-weaning gain (rg: -0.10, rP: -0.04), which partially agrees with this study in terms of the extent of relation. Significantly positive and strong correlations (0.99 for both rg and rp) between pre-weaning and post-weaning growth were evidenced by Gupta et al. (2016), which are not in agreement with this study. In another study, Kuthu et al. (2015) reported very low to high rp (0.01 to 0.97) and high rg (0.63 to 0.75) among post-weaning growth at 6, 9 and 12 months for Teddy goat, which were not in line with the results of this study. The amalgamation of results for both direction and strength of correlations as estimated by different authors may be due to difference of breeds, extent of environmental and maternal effect, sample size and methods of estimation.

The rg and rp among GR at different ages indicate that selection for genetic improvement of one  trait  may  have little chance of improvement for other traits, due to very poor relationships among most pairs of traits, except between GR0-3 and GR0-12 and between GR3-6 and GR0-12. However, GR0-3 is the best predictor of selection criteria for genetic improvement of GR for GR0-12, as higher rg and rp were obtained between the traits.

The response or genetic progress per generation due to selection for GR in BBG are presented in Table 4 and Figures 3 to 7 which demonstrate that actual responses were higher than responses predicted for all ages of GR in the first two BS. In all population, overall genetic improvement per generation for GR0-3, GR3-6, GR6- 9, GR9-12 and GR0-12 were predicted to increase by 2.69, 2.60, 1.46, 1.20 and 1.12 g, respectively, while those of actually gains were 4.52, 2.31, 2.59, 3.00 and 3.69 g, respectively. The results further revealed that actual genetic improvement for GR in BS1 was higher than actual response for GR and does, even only superior bucks enhanced growth performance in progressive generations. However, geneticimprovement of body weight gain is also possible due to moderate estimates of heritability, but selection of animals based on growth at any stage may not result in simultaneous improvement at other stages. The result also shows that selection on body weight gain at birth to 3 months may result in improvement of overall body weight gain from birth to12 months. 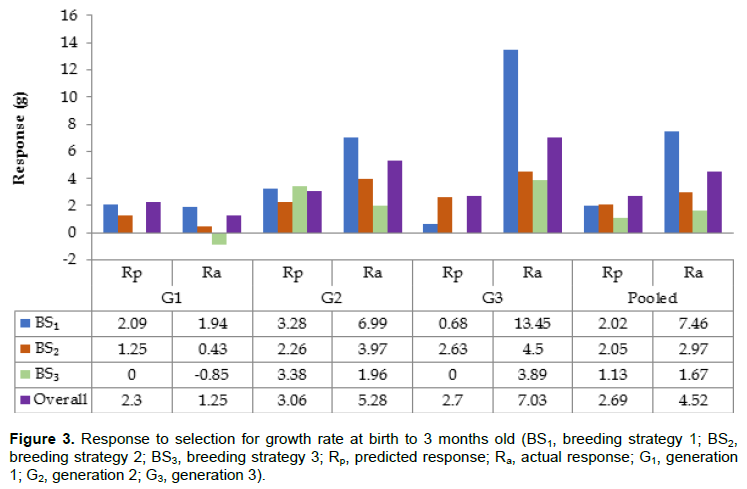 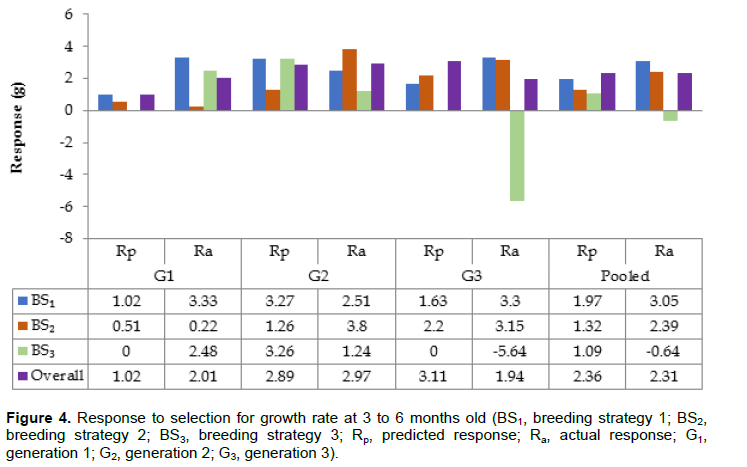 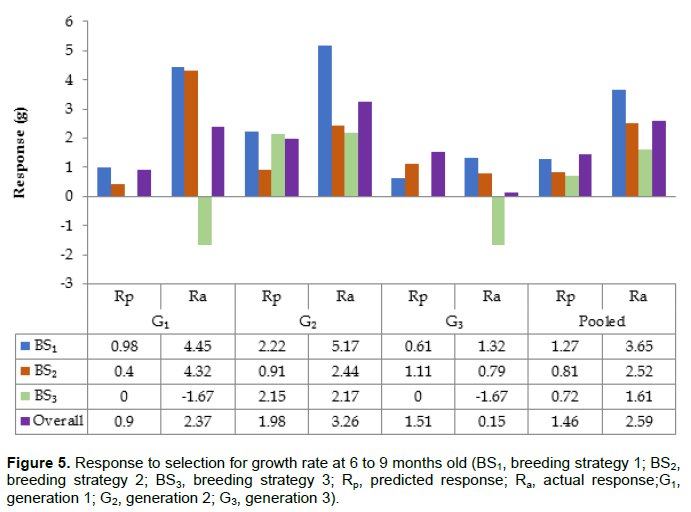 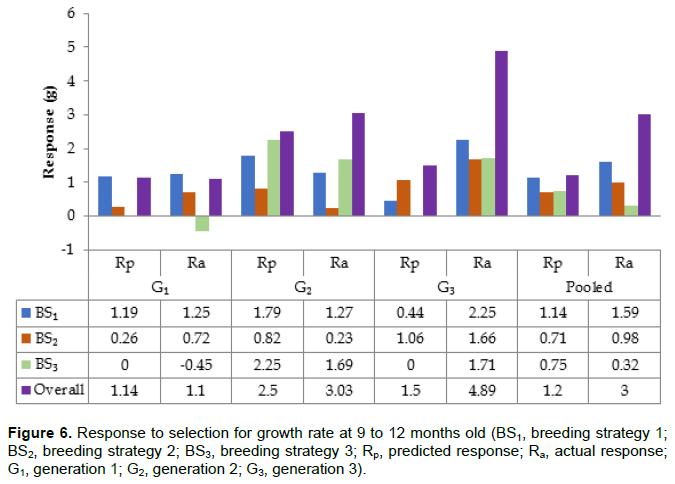 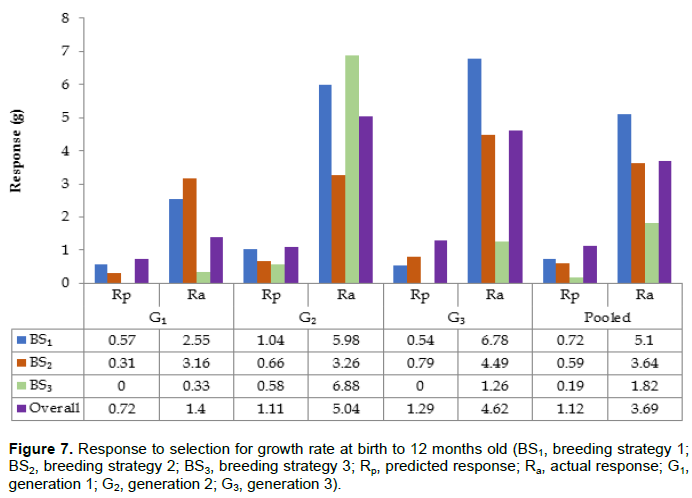