This work aims to evaluate production of Brachiaria brizantha (Syn. Urochloa brizantha) cv. Marandu subjected to liming and nitrogen fertilization on climatic conditions in the municipality of Humaitá State of Amazonas, Amazônia, Brazil. For both, pot experiment with soil after sowing was kept in a greenhouse at the Institute of Agriculture and Environmental Education (IEAA / UFAM). Part of the soil pots was incubated with limestone while the remainder of the vessels is used without liming ground. Different nitrogen levels (0, 100, 0 200 and 300 kg.ha-1) were also applied in a 2x4 factorial design with four replications. To assess the growth and development of plants, number of tillers, along with weight of fresh and dry matter were used in the first, second and third cut. Liming enables further growth and development of B. brizantha (Syn. U. brizantha) plants and enhances the plant response to nitrogen.

An important characteristic of Brazilian cattle breeding is that most of their herd is grazed (Ferraz and Felício, 2010). Currently, Brazil uses 167.5 million hectares of cattle pasture, with a herd of 222 million cattle (Anuário, 2017).

According to Ministério da Agricultura, Pecuária e Abastecimento - MAPA (2015), some 30 million hectares of pasture in Brazil are currently undergoing some degree of degradation, and the correct use of technologies and adoption  of  good  agricultural  practices  would  make  it possible to reinsert these areas into the productive process. The occupation of this type of areas would imply a lesser need for the opening of new areas for agriculture and livestock (Borghetti et al., 2017).

The genus Brachiaria is cultivated more among the forages cultivated in Brazil because it presents advantages such as strong adaptation to the acid soils, hence low fertility besides providing high yield of dry matter (DM) per hectare. Despite the economic importance of this genus, there are frequent failures in the production system of these pastures, by adopting techniques and strategies that are not appropriate (Moreira et al., 2009).

Nitrogen is the main nutrient for maintaining the productivity of forage grasses (Werner, 1994), and as part of the chlorophyll molecule, participates directly in photosynthesis (Sousa and Lobato, 2004). Urea is currently the most used nitrogen fertilizer in Brazil and in the world, corresponding to about 60% of fertilizers commercialized, due to the advantages offered as ease of manufacture, low production costs, and higher concentration of N (Chagas et al., 2017).

The objective of this work was to evaluate the productive capacity of Brachiaria brizantha (Syn. Urochloa brizantha) cv. Marandu submitted to liming and nitrogen fertilization, under climatic conditions of the Humaitá-AM municipality, Brazil.

The experiment was conducted in Humaitá - AM, Brazil (latitude 07º30'22 "south and longitude 63º01'15" west,) from July 2012 to February 2013 under greenhouse conditions. The climate of the region, according to Koppen classification, is tropical rainy type (monsoon type rainfall), presenting a dry period of short duration (Am), temperatures ranging from 25 to 27°C and average annual rainfall of 2500 mm, with rainy season beginning in October and extending until June along with relative humidity of 85-90%. Seeds of B. brizantha cv. Marandu were planted in 15 dm3 pots (Dimensions: 28 cm wide Top, 28 cm high, 25 cm wide bottom) with a typical dystrophic red-yellow Latosol (LVAdf (Empresa Brasileira de Pesquisa Agropecuária - EMBRAPA, 2006), collected from the 0-20 cm layer in UFAM-Humaitá Campus, which were submitted to chemical analysis (Table 1). After germination, two slabs were performed every five days until five plants were left per pot. The parameters used for plant selection includes homogeneity, position inside the pot and size.

According to the results presented in Table 1, the need for liming was determined using 45% for V2 of the formula, according to Werner et al. (1996). After application of the "filler" limestone, the soil was incubated for 30 days. Following this period, seed sowing of Marandu was carried out, and after 15 days, the thinning of the seedlings was done leaving only five per pot. 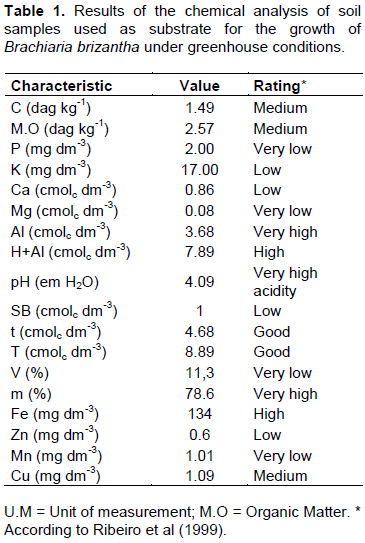 Four doses of Nitrogen (0; 100; 200 and 300 kg.ha-1), divided into three coverage applications were used: the first dose after thinning the plants (cut to uniformity at 10 cm from the soil), second dose after first cut and the third dose was performed after the second cut of the plants. The nitrogen was applied in the form of urea.

Single doses of 120 kg.ha-1 of P205 and 60 kg.ha-1 of K2O were applied in all treatments. Three cuts were performed within a 45-day period, with first interval starting at 45 days after cutting the plants and applying the nitrogen. The plants were evaluated for tillering number, green biomass and shoot dry matter. To determine the green biomass, the shoot was cut at a height of 10 cm from the soil surface and then weighed. To evaluate the dry biomass, the samples were packed in paper bags and kept in an oven at 65ºC until reaching constant weight. Three pots were used per treatments per replicate.

The experimental design was randomized complete block with the treatments arranged in a 2x4 factorial scheme (with and without liming and doses 0, 100, 200 and 300 kg.ha-1 of nitrogen), with four replications. The results were subjected to analysis of variance and the means of liming factor and nitrogen doses was studied by means of the F test and the regression analysis, respectively. Sisvar computational package was used to perform the statistical analysis (Ferreira, 2000).

Liming significantly increased the number of tillers per plant and fresh and dry weights (Table 1) with a high degree  of  probability  when soil acidity correction occurs (CaCO3 e MgCO3), taking into account the Ca: Mg ratio. There is a high increase in forage productivity due to improvements in the chemical, physical and biological properties of the soil (Freiria et al., 2008; Barreto et al., 2008) as well as in the nutritional balance of the plant (Oliveira, 2011).

In relation to the application of different nitrogen rates, the number of tillers was linearly increased in the first, second and third cuts, according to the increase of the applied nitrogen dose (Figure 1A, 1B and 1C), regardless of the liming.

Marques et al. (2016), studying the application of nitrogen doses in Massai guinea grass (Panicum maximum), showed that the rate of emergence of tillers, dry matter, protein content and crude protein increased linearly in the second and third cuts after the application of nitrogen. Also, the dose of 120 mg/dm³ presented the best results in relation to the absence of nitrogen fertilization, helping to obtain 16% of crude protein, 69% of neutral detergent fiber and 20 g of dry matter per pot, that is, 4 g per plant.

Pereira et al. (2011), working with Mombasa guinea grass (P. maximum) in three cultivated densities and fertilized with nitrogen, obtained 34.9 and 46.0% of tiller increase in relation to absence and presence of N (320 kg.ha-1), respectively. According to Werner (1986), nitrogen is responsible for characteristics related to plant size, such as leaf size, stem size, tillering and development.

For the green biomass analyzed in the second and third cuts, there was no interaction between the liming and the application of nitrogen (Figures 2B and 2C). It was observed that when increasing the nitrogen dose from 200 kg.ha-1, there was no continuity of the increase of green biomass of the plants in the second cut, as observed for smaller doses. This was probably due to the effects of urea (H+) on soil acidification, since, while limestone increases base saturation, nitrogen caused a reduction in soil acidity, altering the need for soil acidity correction. Costa et al. (2008), studying doses and nitrogen sources in pasture of Marandu grass observed a linear increase in the production of green biomass with the application of increasing doses of nitrogen. However, the application of high doses of N increases the levels of Al3+, Organic Matter, Total Nitrogen, N-NO3- and N-NH4+ in the soil.

As observed for the green biomass in the first cut, a significant interaction between liming and nitrogen application was observed (Figure 3A). There was an increasing linear response of the dry biomass with the increase of nitrogen applied when liming was performed.

Results observed for the same variable without liming showed that it tends to increase up to the dose of nitrogen equivalent to 200 kg.ha-1, reducing with the application of higher doses of nitrogen. Similar to that observed for the green matter in the second cut (Table 2), the dry matter of the plants was collected in the second cut, presenting a quadratic tendency in relation to the application of nitrogen, and with a reduction in the increase of the dry matter in high doses.

Primavesi et al. (2004) reported similar effects on base saturation by lime and nitrogen in a study with signal grass B. decumbens (Urochloa decumbens) cv. Basilisk). It is pertinent to point out that in the first cut there was interaction of the application of limestone and nitrogen; a fact that on the contrary, was not reported by Elyas et al. (2006), in Pojuca grass (Paspalum atratum Swalen cv. Pojuca) during the first three cuts. However, the same authors concluded that the application  of  200 mg.dm-3 of N is indispensable for a good growth and good dry matter production of the Pojuca grass, which is not necessary to raise the level of soil base saturation above 40%.

It’s important to point out that Brachiaria response to the application of limestone depends on the initial V% of the soil. In the present study, the initial V% was 11%; even if it was low, it could supply the plant with the nutrients Ca and Mg, because Cruz et al. (1994) obtained response  from  Brachiaria  to  liming on soil with very low V% (4%). In addition to this fact, another aspect that is important to explain the absence of the response of the forage to the application of limestone, which is the time of reaction of the limestone, may have been insufficient since the use of limestone dose was used at most V equal to 45%.

The evaluated variables were not significantly affected by limestone application. Rodrigues et al. (2005), working with Brachiaria decumbens (V = 32%) also did not observe effect on dry matter production. Other authors also reported the lack of response of forages to the application of limestone, such as in Tobiatã grass (Luz et al., 2002) and Pojuca grass (Elyas et al., 2006).

Kawatoko et al (2012), evaluating the response of B. decumbens to the application of limestone, nitrogen and zinc in the production of dry matter during four cuts verified the response of B. decumbens. The application of limestone occurred only in the fourth cut when in the presence of nitrogen fertilization; whereas in the application of nitrogen, it gave immediate effect, increasing the dry matter yield of the forage during the first three cuts. This occurred probably because the Marandu grass is more demanding in soil fertility than the Basilisk grass (Santos et al., 2009).

Application of 200 kg.ha-1 of N is indispensable for good growth and good biomass production of B. brizantha (Syn. U. brizantha) cv. Marandu, and is unnecessary for raising the saturation level by soil bases above 45%. The evaluated variables were not significantly affected by limestone application.