An experiment was carried out to evaluate performances of four tomato varieties (Bishola, Eshet, Marglobe and Moneymaker) harvested at ripe stage from greenhouse and open field condition at Jimma for post-harvest quality characters (total soluble solid, weight loss, titratable acidity, sugar-acid ratio, and pH). Bishola and Eshet had better chemical quality characteristics maintained throughout the end of the storage period. Varieties grown under open field condition showed highest fruit weight loss. The total soluble solid (TSS) values the open field grown tomatoes had highest than greenhouse grown tomatoes throughout storage period. The heighest TSS was obtained at 14 days storage  while the lowest was at harvest. Titratable acidity of tomatoes after harvest tended to decrease throughout the storage period. Bishola had highest titratable acidity when compared with Eshet. There was increase in sugar/acid ratio throughout storage time for greenhouse growing condition, under open field condition there is a slight increment and rapid after harvest and then decrease at 14 days the storage period. This indicates that Greenhouse grown tomatoes have good flavor than open field grown. Tomato varieties grown under greenhouse condition were less weight loss, and higher sugar acid ratio and less prone to physical injuries than fruits of grown under open field condition. Variety Eshet and Bishola could be selected in maintaining better overall quality characteristics.
Key words: Tomato, variety, storage period, greenhouse.

Tomato (Solanum lycopersicum) is one of the most widely eaten vegetable crop in the world. Its popularity stems from the fact that it can be eaten fresh or in a multiple of processed forms. Growing crops in a greenhouse has many advantages. Huge quantities can be produced on a small piece of land. Plants can be harvested continuously because the irrigation and temperature can be controlled and enables farmers to supply off season markets when fresh food prices are at a premium. Greenhouse produced tomatoes have a longer shelf life (Muluken, 2011). Greenhouse tomato production is important to reduce production cost by involving less labor and application of minimum herbicides and insecticides (Muluken, 2011). Among vegetables grown in Ethiopia Tomato is the most important and widely cultivated vegetable. Different tomato types (Fresh, processing and cherry) are produced. Cultivation of tomatoes improves diet of the people, as they are a part of every salad in combination with leaf vegetables, green onions, cucumbers, peppers, and other vegetables (AVRDC, 2005). As a processing crop, it ranks first among all vegetables grown throughout the world (Nileema and Sreenivasa, 2011).
According to Preedy and Watson (2008) and Wener (2000), high concentration of carotenoids is obtained from processed tomatoes. Tomatoes are important sources of lycopene, which is known to alleviate cancer, heart diseases and premature aging. The function of antioxidant in tomatoes varies depending on the genotypic variability, ripening stage and growing conditions (Leonardi et al., 2000). Dry matter content of a tomato such as vitamin C, lycopene and potassium are also affected by genotype and growing environment. Orange-colored tomato cultivars have high contents of carotenoids and volatile compounds, while yellow fruit cultivars have a lycopene content 10-fold lower than red coloured fruit cultivars (Hart and Scott, 1995). The quality of the produce begins with the growing conditions and the area where it’s produced. Other subsequent factors that determine the quality of fruits and vegetables include the harvesting methods, biological maturity postharvest environment, handling and storage conditions (Kader, 2008).
The ripening processes and storage temperature have a direct effect on chemical and nutritional composition of tomatoes (Sahlin et al., 2004). Taste attributes such as sweetness, acidity and fruity-floral flavour increase with tomato maturity. On the other hand, fruit firmness can decrease during the postharvest handling. High storage temperatures induce softening and lead to reduced perishability of tomatoes (Rutkowski et al., 2008). Postharvest qualities that developed during growing cannot be improved; it is maintained by applying different postharvest handling procedures, by growing varieties with better storage quality and by harvesting at proper stage (Vijay et al., 2010). In addition to genotypic influence, dry matter content (acidity, vitamin C and lycopene) of tomatoes is also influenced by environmental factors such as temperature light intensity and humidity. For example, contents are strongly affected by light intensity and temperature (Venter, 1977). Thus this study was initiated to test the effect of variety and growing environment at different storage period, on the quality of tomato.

Experimental design and treatments
The experiment consisted of four tomato varieties (Bishola, ‘Eshete’ ‘Marglobe’ and Money maker) grown at Jimma University College of Agriculture and Veterinary Medicine) at two growing conditions (greenhouse and open field) and three storage durations (0days (at harvest), 1(7days after harvest), and 2(14 days after harvest). The trial was set up in a randomized complete block design (RCBD) in 4 × 3 × 2 factorial arrangements with three replications. Each treatment combination was assigned randomly to experimental units within a block. Sample fruits were harvested at ripe stage (full surface of skin have red color) from the central three rows (12 plants) per plot. Harvested fruits from greenhouse and open field growing environment was stored under ambient condition. There were 30 fruits per plot and fruits were packed in standard card board boxes for storage.
Experimental procedures
Uniform colored disease free and healthy fruits having similar size were harvested. Harvested, fruits were immediately transported to laboratory using standard plastic and hand washed with tap water to reduce microbial populations on the surface. Washed fruits was dried with soft cloth and then stored under ambient conditions. There were 30 fruits per replication for each variety, to evaluate the shelf life of fruits over the storage period. Ten sample fruits were randomly taken from each replication to collected data. The samples were taken to the Jimma University Post Harvest Laboratory at 7 days and 14 days of storage period.
Data collected
Data were collected from the middle three rows and twelve plants per plot for weight loss, total soluble solid (TSS), titratable acidity, pH and sugar acid ratio. From the following,
Weight loss (g): Fruits were weighed at harvest, 7 days and 14 days storage duration using sensitive balance. The

Titratable acidity (TA): determined by titration of homogenized powder sample with 0.01 N NaOH using fenolftaleine-indicator (expressed as % citric acid); pH: pH of juice squeezed from fruit was determined in 50 ml samples of pulp with a digital pH-meter; CP - 505 Clmeriron. Total soluble solids (TSS): measured by refractometer (Bellingham + Stanley 45-02 BS eclipse) by placing one to two drops of clean juice on the prism. After sampling, the prism of the refractometer was washed with distilled water and dried before use. Fruits juice was extracted using a juice extractor and filtered using metallic sieve. Sugar-Acid ratio: a flavor indicator as described by Kader et al. (1978).
Statistical analysis
The collected data were first checked for meeting all the ANOVA assumptions and subjected to analysis of variance (ANOVA) by using SAS computer software version 9.2 (SAS Institute Inc., 2008). When ANOVA showed significant differences, mean separation was carried out using LSD (Least Significant Difference) test at 5% significance level (Gomez and Gomez, 1984). 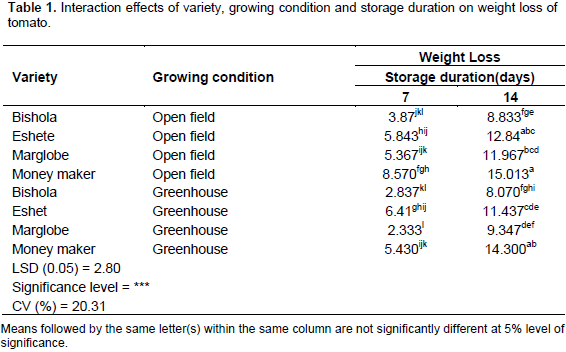 Total soluble solids (TSS)
Variety, growing condition and storage duration showed highly significant difference (p<0.001) interaction effect on total soluble solid (Table 2). The TSS values the open field grown tomatoes had highest than greenhouse grown tomatoes throughout storage period. TSS value ranged from 5.53°Brix from Eshet which grown under open field to 4.13°Brix Momeymaker which grown under greenhouse at 14 days storage period. According to Tigist et al. (2011), TSS contents for different tomatoes varies between 4.23 °Brix and 5.22°Brix. At harvest, the TSS content of Marglobe and Eshet inside greenhouse and Eshet and moneymaker under openfield was the highest. At seven and fourteen day’s storage period the highest TSS was obtained from Eshet and Marglobe in side greenhouse and Eshet which is on par with that of Bishola and moneymaker under open field condition. Wahundeniya et al. (2002) and Birhanu and Tilahun (2010), Tigist et al. (2011), reported that significant variation for total soluble solid due to varietal difference for TSS of the fruits. 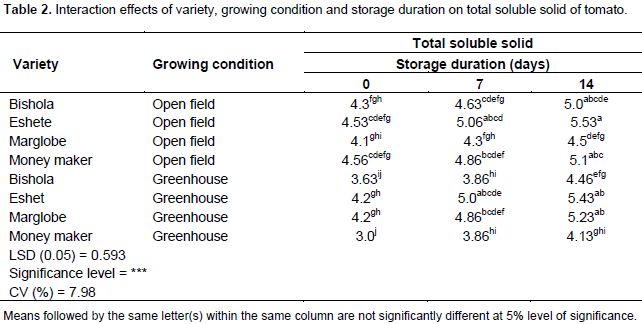 Storage period also have highly significant (P < 0.001) effect on mean total soluble solid of tomato.The heighest TSS (4.92°Brix) was obtained at 14 days storage while the lowest (4.08°Brix) was at harvest. The increase in TSS at 14 days storage was due to the direct relationship between total soluble solids increase and colour change with maturity (Salunkhe et al., 1974) which is in agreement with the present result. Increase in TSS of tomato fruits could be due to excessive moisture loss which increases concentration as well as the hydrolysis of carbohydrates to solublesugars (Nath et al., 2011).
Titratable acidity
Titratable acidity was found to be highly significantly (P < 0.01) affected by varity, storage period, growing condition and the interaction of the three factors (Table 3). Titratable acidity of tomatoes after harvest has a trend to decrease throughout the storage period. The higher loss of titratable acidity during the storage time could be related to higher respiration rate as ripening advances where organic acids are used as substrate in respiration process. Under open field condition, varieties recorded higher titratbile acidity than greenhouse grown tomatoes during 14 days storage period; Bishola had 0.69% titratable acidity than Eshet that had the lowest value 0.42%. Varieties with higher titratable acidity could have lower incidence of fungal infection and suitable processing (Tigist et al., 2011).The environmental effect on fruit acidity is complex. Organic acids can be produced in the fruit itself from stored carbohydrates (Sakiyama and Stevens, 1976), while some of these acids may be translocated from the leaves and roots to the fruits (Bertin et al., 2000). 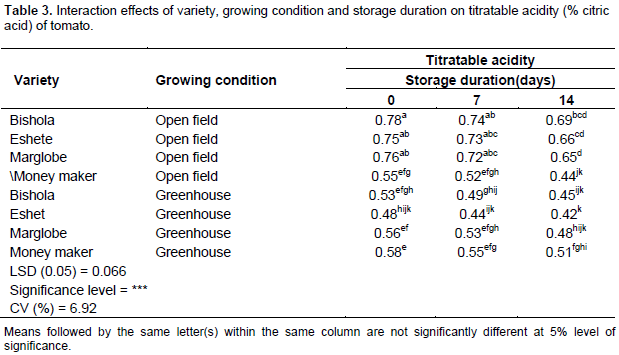 Sugar-Acid ratio
Sugar acid ratio was found to be highly significantly (P < 0.01) affected by varity, storage period, growing condition and the interaction of the three factors (Table 4). There was increment in sugar/acid ratio throughout storage time for greenhouse growing condition and under open field condition slightly increased soon after harvest and then start to decrease at 14 days the storage period. This could have a better implication that Greenhouse grown tomatoes have better flavored than open field grown tomato varieties. This is due to the fact that tomato flavor characteristics are influenced by the balance of sugar and acid. The result showed that the higher sugar/acid ratio of greenhouse tomatoes compared with open field grown tomatoes was adequate evidence to confirm the superior flavor. Stevens (1972) reported that sugar/acid content is in large part a function of genotypic difference, which related with difference in metabolic propensity for the accumulation of volatile and nonvolatile (sugar, TA and soluble solids) responsible for determining flavor of the fruits (Pairin and Edgar, 2008). 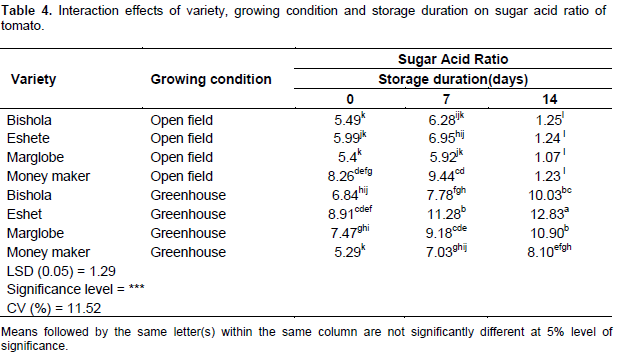 pH
Variety and storage duration highly significantly (P<0.001) influenced the pH (Table 5). Eshet and Marglobe recorded the highest pH and money maker and Bishola recorded the lowest pH level. The highest pH is obtained from 14 days storage period and the lowest pH is from 0 days storage or at harvest. The result is in agreement with Tigist et al. (2011) who reported a significant effect of storage period on pH and pH increase with storage period. Similar results were also reported by Tigist et al. (2011) reported that, amount of organic acid usually decreases during maturity, because they are substrate of respiration. The pH of a produce depends the genotype and type for cultivation (Simmonds, 1969). One of the important factors that have an effect on the actual pH values of tomato are variety and stage of maturity. 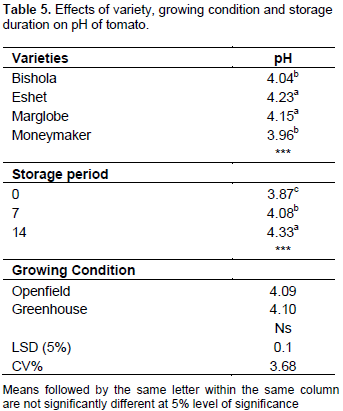