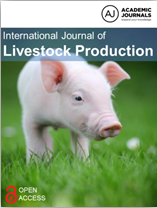 This study aimed at evaluating some morphological traits in Djallonké sheep reared in four localities (Dioïla, Kolondiéba, Yanfolila and Kita) in the south of Mali. Two hundred and sixty sheep (40 males and 220 females) randomly selected from these localities were used for measuring the following traits: Coat color, presence of horns/wattles, height at withers (HW), and live body weight (LBW). Animals belonged to five age groups ranging from < 1 year to ≥ 4 years, with females being predominant in each group. Nearly all males had horns (94%), whereas these were present only in a small subset of females (6%). For all animals, wattles were less frequent (10%) and the dominant coat color was plain white (45%) and white with particularities (38%). HW and LBW values were not significantly different between rams from Dioïla and Kolondiéba but were higher than those of their counterparts from Kita and Yanfolila. Ewes from Kita, Kolondiéba, and Yanfolila displayed comparable values for both HW and LBW but these were lower than those of their counterparts from Dioïla. These findings might serve as a basis for designing and implementing a genetic project aimed at ensuring the sustainable conservation and valorization of Djallonké sheep in Mali.