Auditory effects of noise and its prevalence among sawmill workers

Noise at work could be hazardous, particularly after prolonged period of exposure. Sources of noise include generators, grinding machines, loud music at home, religious houses and clubs. The objective of this study was to find the auditory effects of noise and its effects on sawmill workers. This is a prospective, community based study involving sawmill workers in Ile-Ife.  The prevalence of hearing loss was determined and the pattern of hearing loss was evaluated among the workers. Four hundred and twenty sawmill workers were recruited into the study of whom 410 were males and 10 females. The prevalence of hearing impairment was 89.7%. Ninety three of them had hearing threshold greater than 40 dB, and it was bilateral in all the cases. Tinnitus was present in 41 (9.8%) subjects. The main auditory effects of occupational noise among sawmill workers are hearing loss and tinnitus.

Noise is an unwanted sound, particularly complex sounds that lacks a musical quality (Stedman’s Electronic Medical Dictionary, 2000). Prolonged exposure to hazardous noise levels could predispose to noise induced hearing loss and this is a well-known entity in the practice of otolaryngology (Valoski, 1994 and Azizi, 2010). Occupational hearing loss is noise induced hearing loss (NIHL) due to chronic overexposure to hazardous sound levels of noise in the work place (Gates and Clark, 2012). Noise is a major cause of occupational illness (Uimonen et al., 1998). Sources of occupational noise include generators, grinding machines, religious houses and clubs. Hearing loss from hazardous noise is an occupational illness among artillery men, ironsmiths, workers in the power houses and highly mechanized industries, sawmills among others. Possible effects of noise include acoustic trauma, tinnitus, temporary threshold shift, permanent threshold shift and interference with communication. Noise has been identified as a variable that could affect public health negatively (Basner et al., 2014). Hence an effective noise prevention program is important initiative which should consists of identification of noise sources and the implementation of noise control measures and regulations of work environments as well as performing periodic audiological evaluation of those who are exposed to noisy environments. This study aims to find the auditory effects of noise and its prevalence among sawmill workers.

Study design
This is a prospective, community based study involving sawmill workers in Ile-Ife with noise related data obtained from the sawmill workers.
Study setting
The study was done in Ife East Local Government Area of Osun State in the southwestern part of Nigeria where more than 500 sawmills are located.
Study protocol
Ten workers were selected from each sawmill, and 42 sawmills were used for the study with a total of 420 sawmill workers were recruited for the investigation. The inclusion criteria involved all adult male and female sawmill workers including male and female in Ife East Local Government area between ages of 18 to 60 years who gave consent for the study. The exclusion criteria included any history and examination findings suggestive of active ear disease at the time of recruitment, head injury, previous chronic ear diseases such as recurrent episode of vertigo, chronic otitis media, use of ototoxic drugs, as well as medical conditions such as diabetes mellitus, and sickle cell disease. The sound level at each work station of the saw mill was measured with a sound level meter when the machines were in operation. Pure tone audiometry was done on all the participants using an international organization for standardization (ISO) standard calibrated screening audiometer that was used to determine the hearing threshold for octave frequencies between 250 to 8000 Hz. Conductive hearing loss was ruled out by a negative history of ear ache, ear discharge at time of recruitment, previous history suggestive chronic ear disease such as chronic otitis media, feeling of aural fullness and autophony. This was followed by an ear examination to ensure participants had a patent external auditory canal, no active ear discharge, intact and shiny tympanic membrane with a normal light reflex.
A Tuning fork test was also done to rule out conductive hearing loss. Pure tone audiometry was done according to guidelines recommended by the American Speech Language Hearing Association (American National standards Institute, 2004). Pure tones were delivered to one ear at a time at octave frequencies between 250 to 800 Hz and the threshold for each frequency taken as the lowest decibel hearing level at which response occurred in at least one half of the ascending trials (Campbell, 1998). Pure tone average was determined by finding the average thresholds from 500, 1000, 2000 and 4000 Hz frequencies, respectively for each ear. The degree of hearing loss in the less affected ear was used in order to determine the prevalence of those who experience a hearing loss. Hearing loss from the audiogram was defined as pure tone average greater than 25 dBHL and categorized (Appendix VIII) as slight (26-40 dBHL), moderate (41-60 dBHL), severe (61-80 dBHL) and profound (81 dBHL or greater) (Mathers et al., 2000). The tinnitus handicap inventory developed by Newman was used to grade the level of tinnitus (Newman et al., 1996). Data were analyzed and results presented in descriptive format.

Four hundred and twenty sawmill workers were recruited into the study that includes 410 males and 10 females. The age grouping of the participants and characteristics of variables are shown in Table 1. The maximum level of occupational noise as measured by a sound meter was 99.5 dB and the minimum 81.9 dB with a mean of 87.7±1.87 dB. An average hearing threshold in the better ear was 36.21±3.53 dB. Table 3 shows 377 sawmill workers had a hearing threshold greater than 25 dB which was bilateral in 234 of the subjects. Hence, the prevalence of hearing impairment was 89.7% with ninety three of them having hearing threshold greater than 40 dB that was bilateral in all the cases. Tinnitus was present in 41(9.8%) subjects and bilateral in 32 cases with the average tinnitus score at 19.8±2.89. 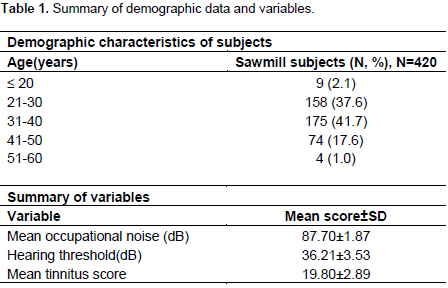 Worldwide, noise-induced hearing impairment is the most prevalent irreversible occupational hazard (Berglund et al., 1999). Noise induced hearing loss has been shown to be more common in males (Wu et al., 1998; Thorne et al., 2008; Razman et al., 2010). This trend may be as a result of males being more exposed to occupational noise than females as observed with sawmill workers during this study. This corroborates the findings by Ighoroje et al. (2004) who also found that sawmill workers are predominantly males. Prolong exposure is known to be hazardous and the effects could be both auditory and non auditory. The auditory effects of noise could be affected by the duration of exposure, intensity of the noise, whether continuous or interrupted noise, co-existing ear disease and the susceptibility of the individual to noise. According to American College of Occupational and Environmental Medicine (2003), occupational noise induced hearing loss (ONIHL) as opposed to occupational acoustic trauma, is hearing loss that develops slowly over a long period of time (several years) as a result of exposure to continuous or intermittent loud noise and it is characterized by being sensorineural, symmetric and bilateral, the risk of having it increases significantly with chronic exposures above 85 dBHL for an 8-hour time-weighted average.
The average noise level measured at the sawmills in this study was 87.7dB as shown in Table 1, and majority of them are exposed to the noise at the sawmill for up to 8hours a day. Hence, sawmill workers are particularly exposed to loud and hazardous noise. Table 2 shows that most of the sawmill workers particularly the bandmill operators, saw doctors, and re-saw operators are exposed to loud noise for a significant duration of at least 8 h. The auditory effect of prolong exposure to loud noise found in this study were hearing loss and tinnitus. Hearing impairment was prevalent (89.7%) among the sawmill workers in this study. This is higher, compared to findings from a similar study in Calabar, Nigeria by Dickson (1990) who found a prevalence of 71%. Hearing threshold of 41dB and above is said to be disabling (Mathers et al, 2000) and this was found in 93 (22.1%) of the subjects recruited for the current study.

According to Nelson et al. (2005), 16% of the disabling hearing loss in adult is attributed to occupational noise, ranging from 7% to 21% in the various sub-regions of the world. The majority of the sawmill workers with hearing loss had a bilateral condition (Table 3) which is typical of noise induced hearing loss. Hearing deficits may be accompanied by tinnitus (ringing in the ears). Tinnitus was another condition that was found in 9.8% of the subjects. Axelsson and Barrenas (1991) found that 33% of patients with tinnitus have a previous history of exposure to occupational noise. Hence, tinnitus could occur as a result of exposure to loud noise. Prolonged exposure to noise is known to cause damage to the sensory epithelium of the cochlea. Damage to the cochlea and altered rate of auditory firing may result in tinnitus (Møller, 1984; Salvi et al., 2000). Prolong exposure to noise can result to hearing loss which can potentially be disabling in nature and it can also cause tinnitus.

Hearing loss and tinnitus which are auditory effects of prolonged exposure to loud noise are prevalent among sawmill workers. It is therefore recommend that all sawmill workers should be encouraged to use hearing protecting devices such as ear muffs, plugs and this should be ensured. Periodic audiometric evaluation should also be encouraged and the design and technology of the machines should be modified to reduce noise emission.