People healed of Ebola and their psychosocial life: About 55 cases at the Donka treatment center (Conakry)

Ebola virus disease (EVD), formerly known as Ebola hemorrhagic fever (EHF), is often a severe and fatal disease. The objective of this study is to identify the psychological and social problems as well as the needs of people cured of Ebola. This work is a prospective, cross-sectional, descriptive study done within a period of three months, from 16 November 2014 to 15 February 2015. The population of this research consists of those who were infected by and cured of Ebola; they were 18 years and above and were both males and females. They have received treatment at Donka (CET) and are members of those affected and healed in Guinea (A.PE.GU.AEG); they were in Conakry during the study period and gave their consent to participate in our study. Of a total of 72 members, 55 (76.39%) met the inclusion criteria of this study. The average age was 29.9 ± 11.33 years [18-66 years] with a male predominance, sex ratio = 1.2. The average duration of isolation was 16 days with extremes of 6 and 25 days. The main psychological disorders experienced by people healed of Ebola are: fear, 85.45%; revivability, 43.64%; nightmare, 63.64%; stress, 56.36%; anxiety, 49.10%; insomnia, 45.45%; withdrawal, 43.63%; insomnia, 45.45%; distrust, 41.82%; discouragement, 41.82%; and those that want to die, 41.82%. On the social level, stigmatization from the neighborhood was 90.91% and distrust 58.18%. This study shows that people infected by and cured of Ebola suffer many psychological and behavioral disorders. Stigma and distrust are the major social problems.

Ebola virus disease (EVD), formerly known as Ebola hemorrhagic fever (EHF) is a severe and fatal disease. The Ebola virus was first identified in 1976 at Zaire during an outbreak of hemorrhagic fevers. Since then, thirty outbreaks have been reported, most of which are limited in scope because it was restricted to remote forest areas in Central Africa. From December 2013, West Africa has faced the largest and most complex outbreak of Ebola ever recorded, and one of the first to reach the urban centers with high population density. Guinea, Liberia and Sierra Leone are the most affected countries (Bruyand et al., 2014). Human transmission of the Ebola virus is primarily linked to direct or indirect contact with blood and body fluids (WHO, 2014). The virus was detected in blood, stool, vomit, urine, saliva, seminal secretions, breast milk, tears and sweat of infected individuals (Bruyand et al., 2014; Bausch et al., 2007; Formenty et al., 2006). Transmission can also occur through direct contact with infected animals or material. Lethality of the virus is between 40 and 90% and this depends on the epidemic conditions and time of care. Currently, there is no specific treatment that has proven effective, but treatment and experimental vaccines are being evaluated (Bruyand et al., 2014). Psychosocial problems arising in emergency situations are closely linked, but can predominantly b be social or psychological in nature (Inter Agency Standing Committee, Reference Group for Mental Health and Psychosocial Support in Emergency Settings, 2010). Ebola outbreaks are events that generate anxiety, fear and even panic. Individuals, families or entire communities may be affected (WHO, 2014). The disease first occurred in December 2013 in Guinea, and was officially declared in March 21, 2014. This announcement created an effect of surprise and panic among the general population, both those healthy and sick and this is because of the nightmarish rumors causing a psychosis with anxiety and distrust that was almost permanent. The objective of this study was to identify the psychological and social problems as well as the needs of people cured of Ebola.

This work is a prospective, cross-sectional, descriptive type of study done within a period of three months, from 16 November 2014 to 15 February 2015. The population of this research consist of those infected by and cured of Ebola; they were 18 years and above, and were males and females. They received treatment at Donka (CET) and are members of those affected by and healed of Ebola in Guinea (A.PE.GU.AEG); they were in Conakry during the study period and gave their consent to participate in our study. Those cured of Ebola who did not provide any information on the survey sheet were not included. Data were collected by a doctor undergoing house function from an anonymous questionnaire in strict confidentiality. The analysis of the variables was made by EPI Info 3.5.1. 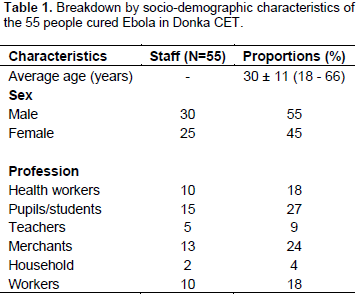 This study comprises the psycho-social experience of people in Guinea cured of Ebola. This study has limitations as regard the small number of inclusion and its short duration. However, it is still useful because it allows us to investigate some problems faced by people cured of Ebola and paves the way for other such studies on a larger scale. The sociodemographic characteristics of people cured of Ebola in this study are those of young males and mostly those from the health district of Coyah. These results interprets that Guinean population is predominantly consist of young population. The majority of people cured of Ebola did not know this disease prior to the outbreak. Indeed, the lack of information and ignorance of the disease can lead to rumor and psychosis in the population. Those who had some information about the disease got it from television, internet, radio and newspapers, which are not accessible to everyone in our context of resource-limited countries. In our modern world, the press is very interested in the management of epidemics, particularly when it comes to Ebola outbreaks. The establishment of effective communication with the media is very important in the management of Ebola outbreaks. (WHO, 2014)
Majority of the people cured of Ebola (51%) had an isolation period of between 15 to 21 days in CET with an average duration of 16 days (6 to 25 days). Indeed, the regression of clinical signs and negativity of a blood test PCR were required for the discharge of patients with Ebola CET. The isolation management of Ebola patients must be conducted on a voluntary basis by the patient (or his family, in case of incapacity of the patient), with their consent and cooperation. The involvement of the patient in the decision making shows respect for the patient, which helps to promotes autonomy and improve cooperation with the medical team. It is indeed rare that people who were well informed about the pros and cons of the Ebola management refuse care. Taking good care of those infected with Ebola is a way of assuring and building trust in the populace. Sometimes, though every reasonable effort has been made, some patients do not want to be supported in an isolation center. If, in rare individual cases we judge that isolation under duress is the only reasonable way to protect the public, it is essential to ensure that the measure be implemented in compliance with ethical principles and human rights (WHO, 2014).
Some of the psychological disorder in some people healed of Ebola is fear, renaissance, nightmare, stress, anxiety and insomnia accompanied by withdrawal, insomnia, distrust, discouragement and longing to die. The occurrence of these disorders can be explained in part by the high lethality among confirmed cases of Ebola and secondly, by the stigmatization of people cured of Ebola. In the African context, suicidal desire may arise when the person fails to speak out, permits evil thought and refuses to eat or receive appropriate care. Although these situations may affect everyone in same way, people react differently. They may feel overwhelmed, confused or may not have an understanding of what is happening. They may experience fear or anxiety, or feel paralyzed and cut off from reality. Some people may have mild reactions, while others may have stronger reactions. Generally, the way each person responds depends on many factors, which include: the nature and severity of the event; previous experience of stressful events; environmental support; physical health; personal and family mental history and health issues; culture and traditions; and age (WHO, 2014).
The neighborhood terms to stigmatize and mistrust those cured of Ebola. This stigmatization affects both health professionals and patients alike because they are seen as vectors of the virus and thus are avoided (United Nations, 2014). Communities can be severely affected by the Ebola virus disease in several ways: people are separated from their families, due to illness or death; health care providers are generally overwhelmed and stressed; those infected by Ebola may be vulnerable to social stigma, worsening their distress and isolation; the whole communities experience the fear and suffering is caused by an epidemic (WHO, 2014). People’s fear of Ebola health facilities and having direct contact with the medical staff could increase the spread of the disease. From the early stage of Ebola, stigmatization should be handled, if we want to win the battle on all fronts. Interventions should be put in place to eliminate the fear of transmission, which is often the cause of stigma.
It would bring to communities and individuals adequate information on the transmission format, and support mechanisms to those already infected with the virus. (United Nations, 2014) During Ebola outbreaks, public health operations are essential but must be complemented by social interventions and mental health. To ensure that appropriate social interventions are implemented, the health professionals and mental health personnel must work together with other social workers, teachers, village chiefs, religious leaders, child protection networks, women's groups, social services, media, community-based organizations, and traditional healers (WHO, 2014). Information and appropriate advice on general measures of protection against the disease should be provided to the populace. Otherwise, the foundations of social cohesion could be undermined by stigma and isolation from the community, which represents a factor of instability in the affected areas and their immediate neighborhoods (WHO, 2014).

This study shows that people infected by and cured of Ebola suffer many psychological and behavioral disorders. Taking systematic psycho-social care of patients in isolation is necessary, as well as their post-isolation, by monitoring them to ensure their social reintegration.

he authors have not declared any conflict of interests.