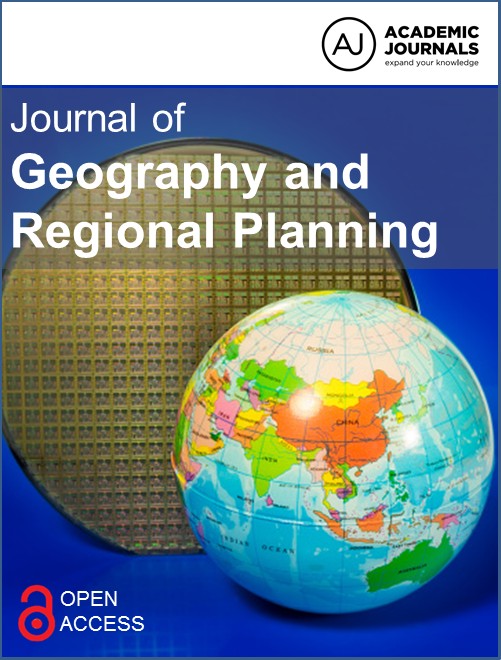 Wellness depends on health and that, in turn, depends on the absence of disease. Analogous models based on physical laws have long been utilized by researchers to understand epidemic expansion in urban communities.  Perhaps the most significant of this class is the gravity model in which population size is equated with planetary mass and distance between cities to that separating planets. While the model assumes homogeneity among different bodies, cities or planets, in epidemiology the likelihood of disease spread may depend on other heterogeneous, non-constant factors. The study used a public dataset of H1N1 Influenza in 2009 as the focus. A natural log regression was applied in an attempt to sort the relative importance of gravity model variables as predictors of influenza occurrence and diffusion. It was found that while the model population size serves as a general predictor of disease expansion that distance failed as an indicator of disease dynamics. Furthermore, findings from the study show that disease progression was irregular and not, as one might expect from the gravity model, consistent in space or over time. The study concludes that the gravity model may serve only as a coarse predictor of disease expansion over time. By extension, this raises similar questions about other models in which homogeneity between populations or network of populations is assumed.

In February, 2020, the Wellcome Trust (2020) called for a program of universal data sharing as COVID-19 expanded from a local to a regional epidemic and then became a global pandemic. In response, a series of publicly available, continuously updated “dashboards” providing real-time, continuously updated data on viral incidence were developed. These included both global surveillance programs like the Johns Hopkins University dashboard (https://coronavirus.jhu.edu/map.html) as well as more dedicated, national or provincial data sites, (for example, https://resources-covid19canada.hub.arcgis. com/). Whatever the scale or resolution all included maps of viral incidence as well as the underlying data used in their construction. The result has been an avalanche of data requiring analysis. To that end, various mathematical models have been available to researchers (Kraemer et al., 2019a). Some are based on analogies to physical laws including, in a partial list, the gravity model, another based on radiation diffusion (Simini et al., 2012), and, more recently, a third based on Ohm's 1827 law of electricity (Sallah et al., 2017). Others employ network analytics similar to those used in transportation studies. Finally, some analogize epidemic and pandemic dynamics through reference to natural phenomena like like ocean waves (Cliff and Haggett, 2006) and forest fires (Koch, 2016).
Irrespective of the precise methods of analysis, most are “share models” in which a specific product (a bacterium or virus) is shared between places (cities, counties, states, etc.) across a commuting or transportation network. All assume, as a class, a general pattern of transfer, constant and regular, that can be mathematically described based on one or another measure of population size and a system of interchange. Different models emphasize the networks (air, rail, or road) connecting population nodes which serve as data points joined at one or another scale (Kraemer et al., 2019b). What has become increasingly clear, during the current pandemic, is the failure of contemporary models to predict disease spread in a way that will permit regional health planners to anticipate an epidemic outbreak. Thus in the spring of 2020 most assumed Covid-19’s Alpha variant would expand from Michigan and Minnesota, where outbreaks were severe, and then progress across the mid-west. Instead, the disease barely spread to nearby Iowa or Ohio, dying out despite clear transportation and commuter ties. Similar discontinuities were observed in previous epidemics of, for example West Nile Virus (Koch and Denike, 2007) and 2009 H1N1 Influenza (Koch, 2021). 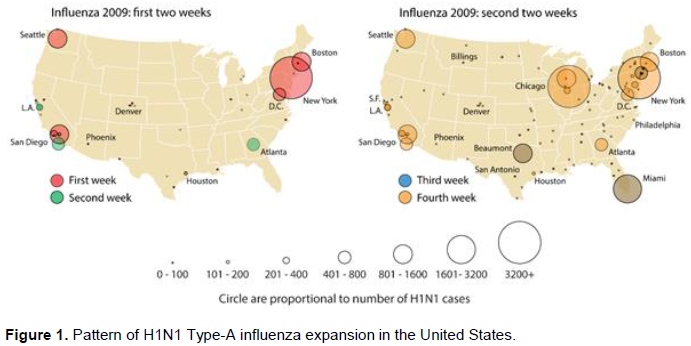 Figure 1 Maps the May 2009 pattern of H1N1 Type-A influenza expansion in the continental United States during the first month of what became a national epidemic. All these mapped locations shared US Census-reported populations of greater than 3.8 million persons and a residential density of at least 1,150 persons per square kilometer (https://www.census.gov/quickfacts/). All were directly or indirectly connected to Mexico City by between two and 12 direct and at least sixty, one-stop indirect flights. Data on connections was observed for May 4, 2018 from the website Expedia.com. Because historical flight data was unavailable, the assumption was made that flight schedules between Mexico City and continental U.S. cities in 2018 reflected similar travel patterns during the earlier epidemic period.
In the second week new outbreaks were reported in San Diego, CA; Atlanta, GA; Detroit, MI; and Arapahoe County near Denver, CO. In addition, outbreaks in the Northern and Southern California areas expanded to nearby cities. In the third week, further outbreaks appeared in Miami, FL, Dallas, TX, New Orleans, LA, and along the northeast corridor. By the end of the fourth week, major outbreaks were reported in Chicago, IL, and Milwaukee, WI. In addition, smaller outbreaks were reported in an increasing number of smaller communities elsewhere across the United States.  As the epidemic continued an every larger number of communities reported influenza cases; in larger cities a second wave of infection after August 29.

What appears to have emerged was a kind of nested hierarchy (Balcan and Vespignani, 2012); in which H1N1 expansion began in a small set of international cities hosting frequent air travel from Mexico City. These cities became independent or semi-independent foci for epidemic expansion to secondary and then tertiary cities with few if any links to the origin site. This expansion occurred across secondary exchange networks among relatively proximate, and later, more distant metropolitan centers in the US. Population size appeared to be an at best coarse descriptor of attraction. The result was not one of a consistent attraction but one resulting, at least in part, from local characteristics and circumstances. These include, for example, the dynamic effect of commuting traffic on the size of a city population. For example, New York City’s resident population doubles in size on a normal workday as suburban workers enter the city (Badger, 2013). The populations of commuters’ home cities decreased by a similar amount. Population itself thus becomes a dynamic variable, not a constant. In addition, within each city the likelihood of viral expansion was dependent not only on size, and transmission by commuters or travelers, but the presence or absence of congregate locations (jails, manufacturing plants, schools, summer camps, military bases, etc.) in which once introduced a respiratory virus might spread. This was evident in a study of the 2009 H1N1-Type Influenza database employed in this study (Koch, 2020, 8) and, again, in the expansion of Covid-19 in 2020-2021. Thus, the national expansion of H1N1 influenza resulted from not one gravitational process but a series of distinct if related dynamics, including population and exchange patterns, involving a broad set of heterogeneous places. Perhaps the best analogy is hydrologic in which waterways are ordered in z hierarchical design frame in which data independence for each place is not assumed. Refining that observation and applying a hydrologic perspective to disease expansion will be the subject of a future report.

This is not to argue the gravity model should be abandoned. "Attraction" remains a powerful and useful concept. Care must be taken, however, in defining the populations of related urban populations employed in its calculations. Further, the nature of cargo, commuting, and other travel networks linking populations of different sizes and at different distances provides a complex mix of interactive volumes any (or all) of which may affect the date and rate of bacterial or viral introduction and potential expansion.  One simply cannot assume that homogeneity exists among various populations at all scales, or that all places within a network are equal. Nor will a single measure of distance or connectivity (work flow, for example) necessarily serve as a simple measure. It is thus unlikely that a single algorithm will fully describe or predict disease expansion within a nation or at a different scale its individual regions. There is therefore an obvious need for further research both based on heterogeneity and the specifics of resident populations and the means by which this or other models, with different variables, might better serve to predict patterns of disease expansion. The next stage in this study for us will be to examine the manner in which this virus was transferred over time between primary foci, NYC, Boston, Los Angeles, and heterogeneous secondary exurban and suburban populations. The goal will be to more precisely define the appropriate scale of analysis as either urban, metropolitan or region, and to consider the extent to which local differences affected the rate of disease expansion and the severity of an epidemic event.