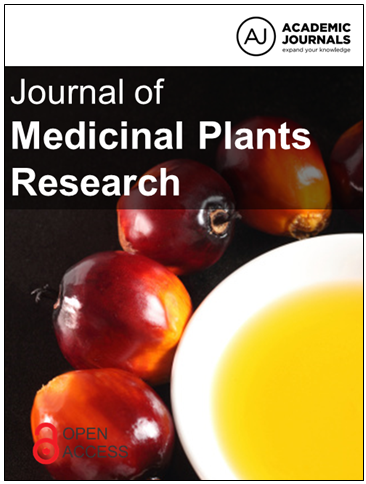 Infectious diseases, including skin infections, have always been treated by plants and other natural products since ancient times. This study investigated the antimicrobial activity of nine medicinal plant species from Gonsé Forest and Bangreweogo Park, Burkina Faso on seven microbial strains involved in skin infections. Sixty-eight organic and aqueous extracts from leaves, stem and root barks of the nine plants were tested on five bacterial and two fungal American Type Culture Collection (ATCC) strains using the disk diffusion and microdilution methods. Twenty-eight extracts (41.17%) from eight of the plants differently inhibited bacteria and fungi, the exception being Wissadula amplissima specie. Gram-positive Cocci (GPC) were the most sensitive to the extracts. Eleven extracts had a Minimum Inhibitory Concentration (MIC) lower than 1 mg/ml (MIC < 1 mg/ml). The extracts of Opilia celtidifolia gave the largest zones of inhibition ranging from 21.67 to 24.33 mm at 100 to 300 mg/ml on GPC and Candida albicans. Its MIC varied from 0.03 to 0.06 mg/ml on Streptococcus pyogenes, and from 0.07 to 0.24 mg/ml on Streptococcus agalactiae. Ethanolic extracts (80 and 96%) of Lawsonia inermis had MIC ranging from 0.29 to 9.37 mg/ml on the sensitive strains. The variable inhibitory activity displayed by the plants confirmed in part their traditional use in the treatment of some bacterial and fungal skin infections.