Spatial distribution of heavy metals in soil with distance from Tazama pipeline through the Mikumi National Park, Tanzania

The global increase of oil need has resulted in exploration of new crude oil production sites and construction of new pipelines as a means of transportation. Pipelines are widely used due to their advantages like low cost, high efficiency and large volume of transportation (Saadi et al., 2018). Despite their advantages pipelines pose many challenges to the biotic and abiotic environment that they pass through.

Likewise, protected areas worldwide are under pressure of oil development.   More  than  25%  of  World  heritage sites are in the pressure of existing or future oil activities (Osti et al., 2011). Major challenges facing protected areas from oil pipelines are pollution and habitats destruction, raising a concern among biodiversity conservationists all over the world (Hebblewhite, 2017).

The Tanzania Zambia Mafuta (TAZAMA) pipeline started operation in 1968; by the year 1973 it had experienced 100 spills at different locations along its route (TAZAMA 2016). Oil spillage in the soil contributes to the addition of heavy metals, some of which are very hazardous to flora and fauna inhabiting a particular soil (Gordon et al., 2018). Moreover, oil pollutants present a major threat to many ecosystems (Xie et al., 2018). The effects of pollution are extended to many flora and fauna since some of oil pollutants including heavy metals can persist in soils for decades (Buskey et al., 2016; Pennings et al., 2014). Studies have documented effects of crude oil pipelines leakages on soil health and plants biological diversity (Allison et al., 2017; Asadirad et al., 2016; Oriaku et al., 2017). Crude oil spillage from pipelines is experienced along pipelines during times of construction, operation and maintenance (Vaezi and Verma, 2018).

Mikumi National Park is an important ecosystem as it shares boundary with Selous Game Reserve – a world heritage site. Crude oils contain hazardous pollutants including heavy metals and hydrocarbons. These pollutants are very toxic and are furthermore not easily degraded once in soil (Bai et al., 2019).

Despite the importance of the global ecosystem in Mikumi, the sensitivity of the general infrastructure element running through the area and the possible pollutants from oil, little is known about the amount of heavy metals that have been released to the environment and its spatial distribution in Mikumi National Park. Therefore, this study was conducted to examine the spatial distribution of heavy metals across the segment of the TAZAMA pipeline through the Mikumi National Park (MINAPA). Moreover, no Environmental Impact Assessment was conducted during the construction of the pipeline and hence no baseline information is available (TAZAMA, 2016). To cover that gap, the study involved a comparison between segments of the pipeline with history of and segments, which never experienced leakages. The following objectives were addressed during the study:

(i) What is the concentration of total heavy metals in soil in oil spilled compared to non-oil spilled segments of the pipeline?

(ii) Does the concentration of heavy metals in soil vary significantly with distance from the edge of the pipeline?

The study was conducted in Mikumi National Park, Tanzania across the segment of the TAZAMA pipeline. Five transects across the pipeline were studies, three with known history of oil spillage and two, which never experienced oil spills (Figure 1). 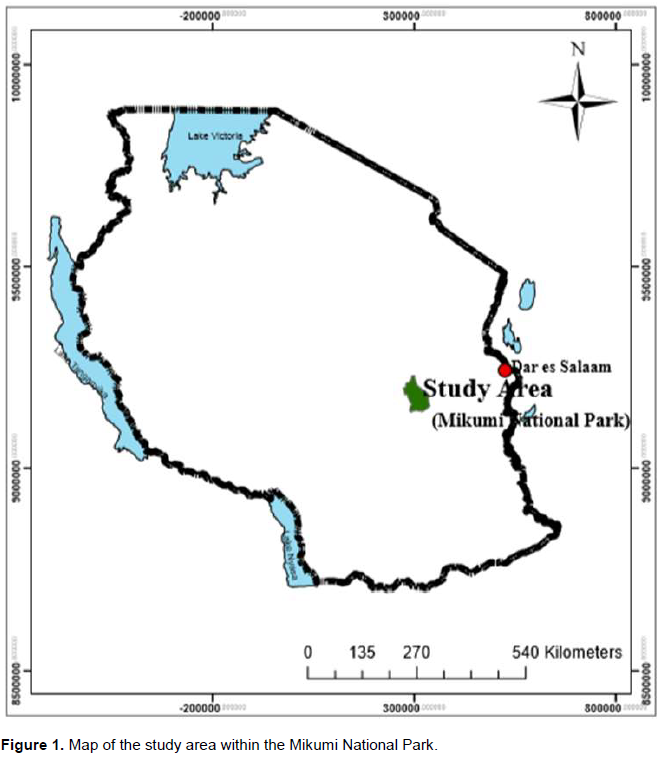 Transects were set at each site perpendicular to the pipeline. Soil was sampled at a distance of 0 m, 5, 20, 35, 50, 100 and 200 m away from the edge of the pipeline to the North and South. At distance of 0 m, soil samples were taken by auger to a depth of 80 cm in spilled transects and 60 cm in non-spilled transects. More depth was possible at 0 m on oil spilled transects because there were piles of soil above the general soil surface resulting from re-covering of the sites after addressing the spillage by the TAZAMA staff. At distances 5, 20 and 35 m from the pipeline soil profiles were excavated to a depth of 1.5 m or a limiting layer, total of 30 soil profiles were excavated. At 50 m, 100 m and 200 m soil samples were also taken by auger to a depth of 60 cm. Soil samples were taken from each designated horizon described using the FAO guidelines for soil profiles description (FAO 2006)(Figure 2). 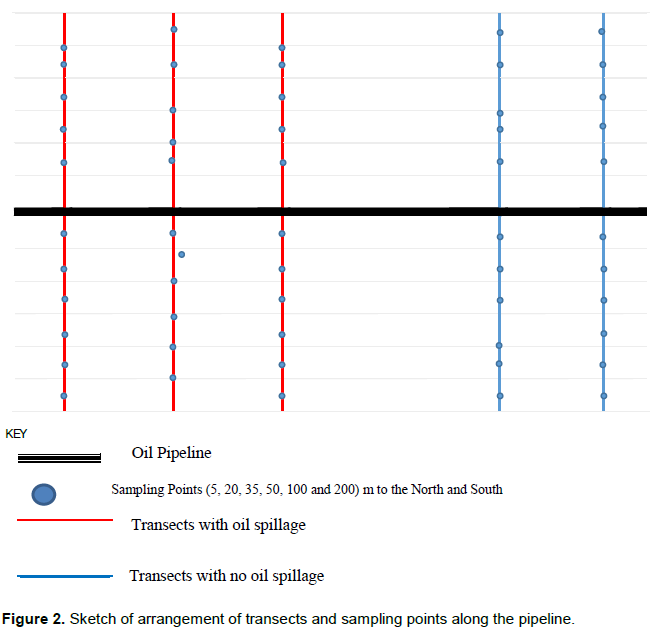 Heavy metals checked were the ones, which reflect the chemistry of the oil through the TAZAMA pipeline. Six heavy metals were analysed from the soil samples including Hg, As, Pb, Cd, Cr and Cu. Total trace elements were extracted from soil by acid digestion Nitric/Perchloric acid 5:1 as described by Stewart et al. (1974). During digestion large amount of the sample was taken, that is 100 g of soil was mixed with 50 ml Nitric/Perchloric acid and digested using hot plate until the sample became colourless. After digestion the samples were filtered through suction pump and the leaching of minerals facilitated by adding 100 ml of dionazed water. The filtrate was collected in to 250 ml flask after which metals were concentrated by removing excess water using rota vapour at 60°C. The resulting concentrated solution of 10 ml was analysed for heavy metals. Metals’ concentration were done to offset the detection limits using AAS which is 0.01-0.001 depending on metal detection limits according to the calculation below.

The analysis of the levels of heavy metals was done at the University of Dar es Salaam Tanzania, using Perkin-Elmer 3100 Atomic Absorption Spectrophotometer. For each sampling point, samples were analysed in triplicates; therefore the values presented are the means of three samples. 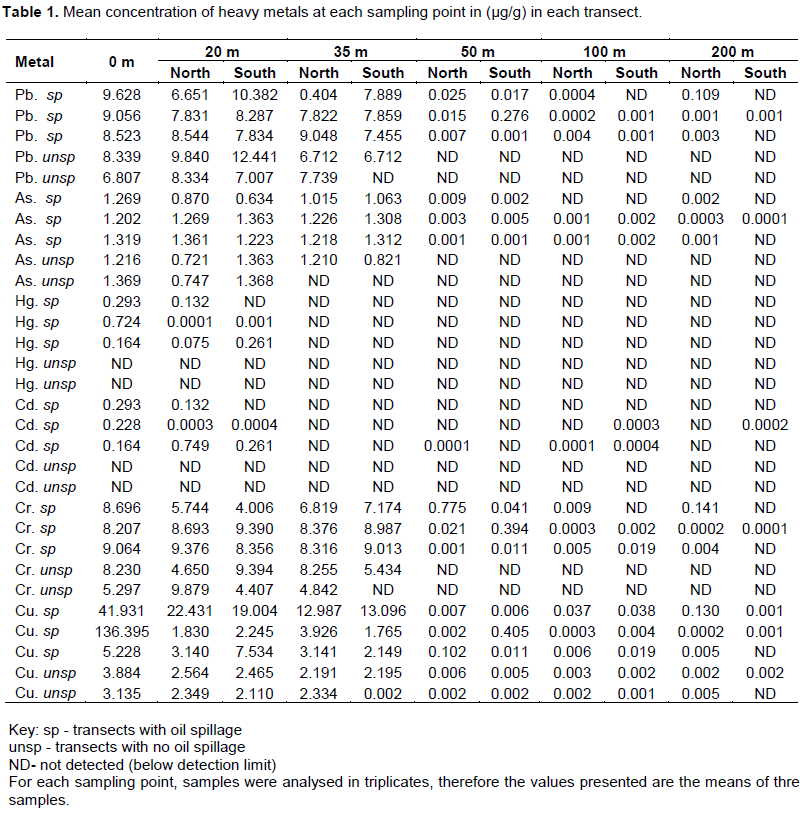 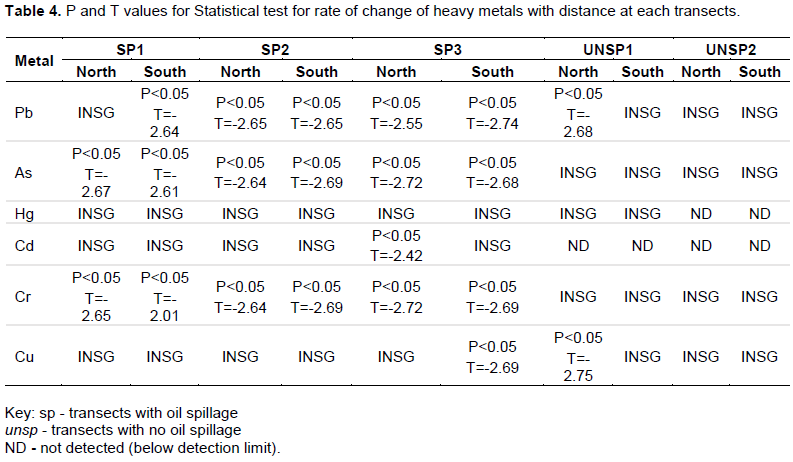 The level of heavy metals concentration detected in all the transects is below the WHO and the Tanzania soil quality-limits for soil contaminants in habitat and agriculture (TZS) maximum permissible limits. However, the concentration is higher  in  transects with history of oil spillage compared to  those  without.  This calls  for  more attention since  prevention  of  heavy  metals  pollution  is currently a global agenda. For the Mikumi National Park in particular, more attention should be given for the TAZAMA pipeline since it is a home for various species of flora and fauna including the endangered and critically endangered species.

The researcher expresses her gratitude to the PELIBIGO Project under EnPe (Energy and Petroleum) Norway, for funding this study.