Swine effluents are among the high pollutants effluent generated by agro-industrial activities, and therefore, inappropriate discharge can initiate fatal processes, such as eutrophication, pollution, and asphyxia of the aquatic biota. In this regard, the anaerobic baffled reactor (ABR) is viewed as a potential bioreactor to handle swine effluents since the baffles play a key role in organic matter degradation. The ABR’s design and the optimization depend on the hydrodynamic knowledge, since it can determine the degree of mixing, the volumetric efficiency, the reactor geometry, and the exact model to be applied in order to determine the performance of the unit. Thus, the evaluation of the hydrodynamic behavior of ABR, set in pilot scale and continuously fed with liquid effluent from swine manure was carried out and lithium chlorine was injected under steady-state operational condition using stimulus response techniques. The ABR hydrodynamics parameters were determined using numerical methods in Matlab® 2009 software. The theoretical hydraulic retention time (HRT) adopted was 16 h. The average residence time (t) found was 24.5 h, the number of dispersion d= 0.13, and the flow pattern was characterized as plug-flow with great axial dispersion. The percentage of dead zones was about 26% and volumetric efficiency ranged from 35 to 100%.
Key words: Swine effluent, hydrodynamic, dispersion number, tracer studies, anaerobic baffled reactor (ABR).

Swine production is one of the most growing segments among the agro-industrial activities in Brazil, whose swine hogs are numbered as 42.5 million, turning the country into the third largest swine producer in the world (ANUALPEC, 2011). Though, the swine production is a vital economical and  social  agricultural  segment,  the  swine wastewater discharge may jeopardize the surroundings ecosystems (waterbodies, soil, and atmosphere), due to the high content of organic matter, nitrogen, phosphorus, potassium, calcium, sodium, magnesium, iron, zinc, cooper and  other  elements  included in  the  swine food stuff (Ye et al., 2010; Matangue and Campos, 2011).
On the one hand, the discharge of this effluent, either in the lotic or lentic water bodies, can cause eutrophication, pollution, asphyxia of the aquatic biota, exacerbating the outbreak of waterborne diseases probability, mainly in the rural area which may affect people and cattle.
The anaerobic baffled reactor (ABR) is one of the high rate reactor pointed out for high strength organic matter, such as swine wastewater, as it consists of a series of vertical bafï¬‚es which force the wastewater to ï¬‚ow under and over them, and as it passes from the inlet to the outlet (Boopath, 1998; Kristina et al., 2008), allowing the reactor´s compartments to acclimatize to the microorganisms, responsible for the degradation process: hydrolysis, acidogenesis, acetogenesis, and methanogenesis. According to Barber and Stuckey (1999), the advantages of this reactor are simple design, low clogging rate, no requirement for biomass with an unusual settling properties, retention of biomass without fixed media, low hydraulic retention time (HRT), and high stability to organic shocks.
Moreover, the knowledge of hydrodynamics of the reactor gives a sensible information about the reactor`s design, such as the dead zones, short-circuits or bypasses caused by preferential paths and the general flow pattern of the reactor which cumulatively gives the reactor overall efficiency. Under this background, this article aims at evaluating the flow pattern, volumetric efficiency and the real HRT of an ABR treating swine liquid effluent form farming, hence, subsidizing in the knowledge of reactor`s design  specially  in  full  scale  for
swine and other high concentrated agricultural effluents.

Experimental set-up
This research was conducted at a pilot plant treatment of swine effluent installed in the Department of Animal Science, Federal University of Lavras (UFLA), as illustrated in Figure 1. The wastewater was generated from the pens and piped conducted to the treatment system by gravity through underground polyvinyl chloride (PVC) pipelines of 200 mm diameter, to a sand retention box and after to a solid retention box, fitted with a triangular-notch weir in order to measure the flow. Through gravity, the wastewater was conducted to a stainless static sieve (SS) where it was sieved to separate the solids from the liquid phase which was driven through PVC pipes to an equalization and acidification tank (EAT). From the EAT, the effluent was a pumped by Memo-Netzsch pump to the ABR and then to upflow anaerobic sludge blanket (UASB) reactors. From UASB reactor, it was conducted to a settling tank (ST), where it was later on used in a greenhouse for fertirrigation.
The experiment lasted for 210 days and started-up was carried out without any inoculum. This reactor was built of solid bricks, mortar, and internally coated with asphalt blanket and in order to improve sealing, it was lined with fiberglass. The net volume of the first, second, and third chamber was 1.90 m3, 2.40 m3, and 2.2 m3/L, respectively, with working volume of 6.50 m3 and each compartment was fitted with four samplers for quantitative and qualitative sludge profile monitoring. The reactor was operated with an adopted HRT of 16 h and the temperature at the local ranged from 21.9 to 24.9°C. The main operational and physical-chemical parameters of ABR are listed in Table 1 and were determined according to Standard Methods (2005). 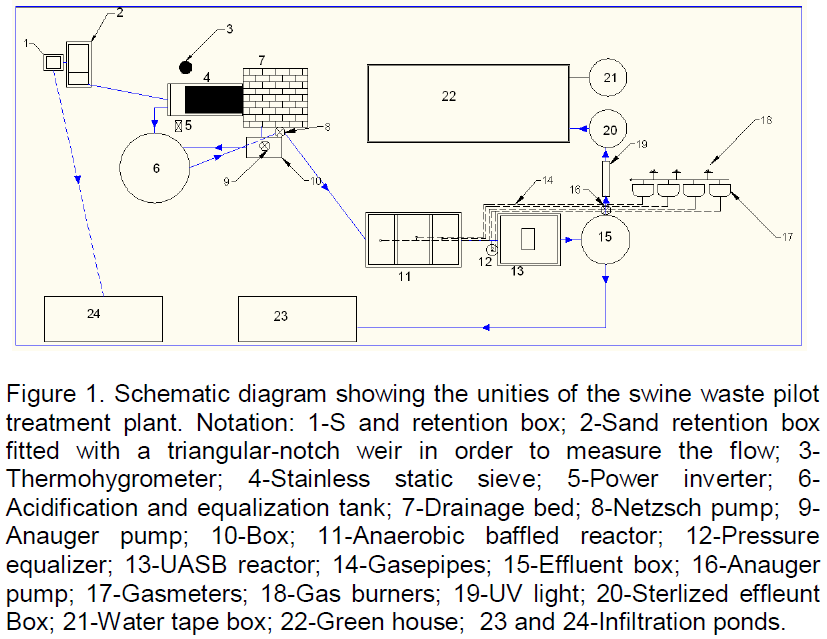 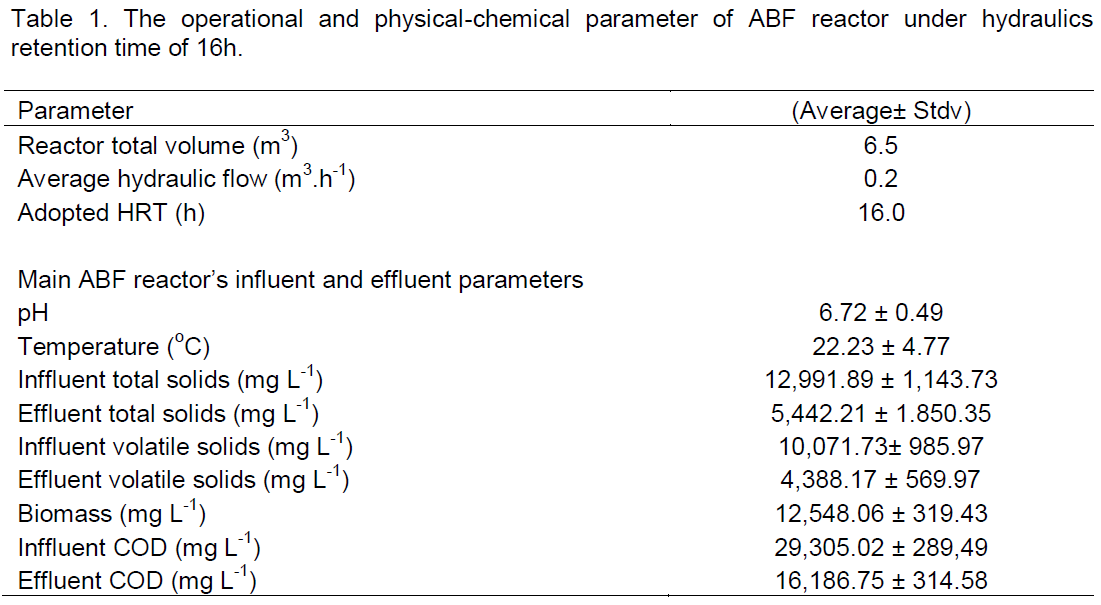 Experimental design
After 210 days of start-up and under steady-state operation, an amount of 1,200 g lithium chlorine was previously diluted in a 5 L of deionized water, corresponding to a maximum theoretical concentration inside the reactor of 30.5 mg L-1 Li+ (ions). This high concentrated solution was instantaneously injected in less than 30 s using a stimulus response method. The Li+ was exactly introduced in the inlet device, placed in the bottom part of the first chamber and was sampled at the outlet device placed in the top of the last chamber as shown in Figure 2. 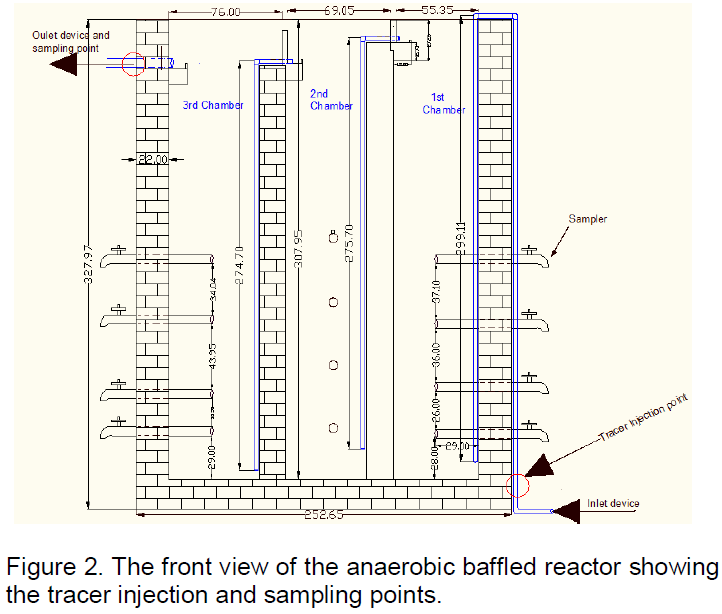 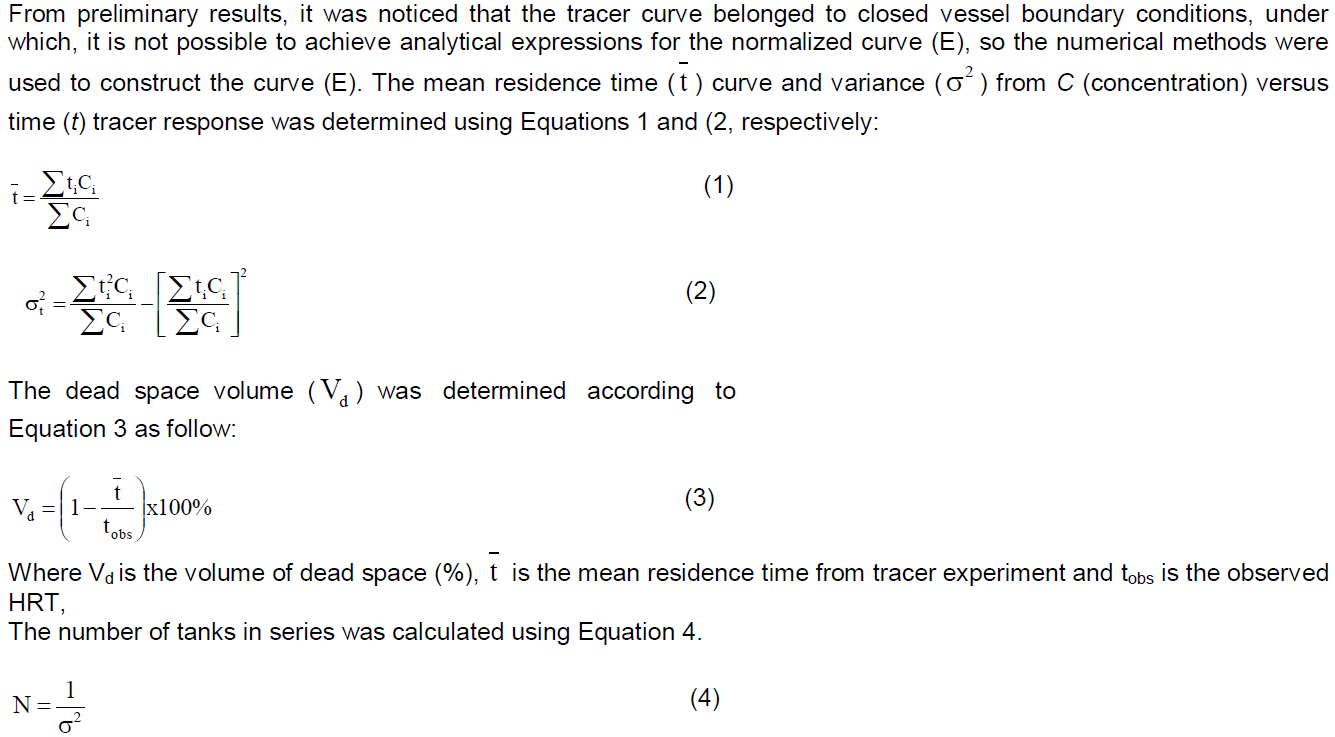 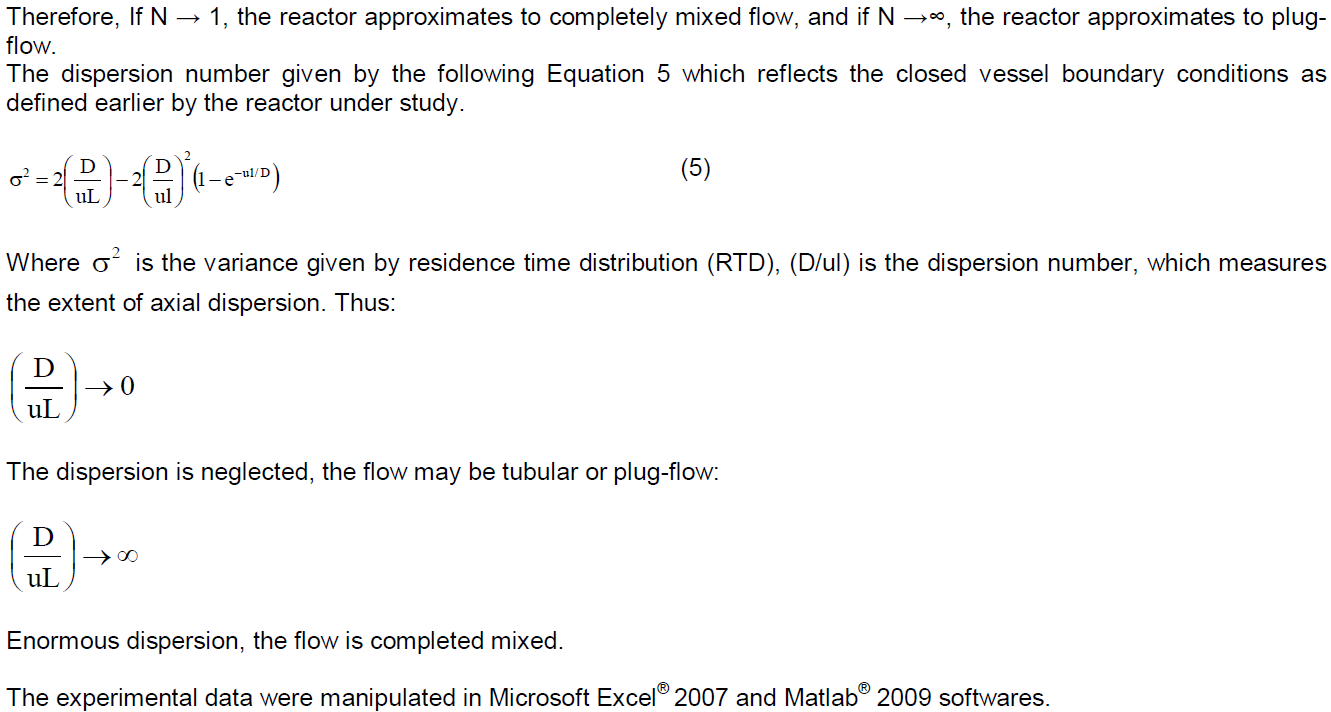 The curve which represents the output concentration vs. time collected at the reactor’s endpoint is as shown in Figure 3, where it is possible to observe particular characteristics, such as, asymmetric distribution of curve and a fair tailing meaning the presence of dead zones inside the reactor.
Likewise, some tracer material was also verified, even before the first evaluation hour likely because of the biogas production, thus evidencing the presence of bypasses in the reactor. The introspective parameter or indexes used to analyze the concentration vs. time curve are illustrated in Table 2 and they give judicious overview about the hydraulics of the reactor.
According to Eddy and Metcalf (2003), this index has the following interpretation:
(i) If the index of short-circuiting (ti/τ) = 1, then the reactor behavior is close to an ideal plug-flow reactor and if it (ti/τ) = 0, then the reactors approaches to increase mixing. This interpretation is applied to modal retention time (tp/τ);
(ii) If (tg/τ) = 1, would indicate a full use of the volume and a value greater or less than 1, the flow disturbance in the reactor;
(iii) The index of mean retention time (t50/τ) corresponds to the third moment which is a skewness and if the t50/τ = 1, then the RTD curve skewness is similar to Gaussian Distribution, less that 1 RTD is left-skewed an great than 1 is right-skewed.
(iv) MDI =1 means plug-flow pattern and MDI = 22 means completely mixed reactor.
(v) Volumetric efficiency (1/MDI) = 1 means effective use of volume.
According to Table 2, the values of (ti/τ) obtained in this reactor was 0.29,  meaning   that   the  percentage  of bypasses in the reactor was 29%. And yet, the indexes of modal (tp/τ) and average (tg/τ) retention time were 1.80 and 2.09, respectively, showing that the flow distribution was not uniform. The  bypasses  and  the  disturbance  of the flow in the reactor showed by (ti/τ), (tp/τ), and (tg/τ) were mainly caused by biogas production from organic matter degradation, by the variation of volumetric load and also by the prismatic shape of the reactor, which is coupled with the gas bubbles imposed by some changes in flow direction. As for the average ratio (t50/τ), the value was 3.65, meaning that the curve is right-skewed which may lead to draw the conclusion of stagnant backwaters inside the reactor, as illustrated by Figure 2. 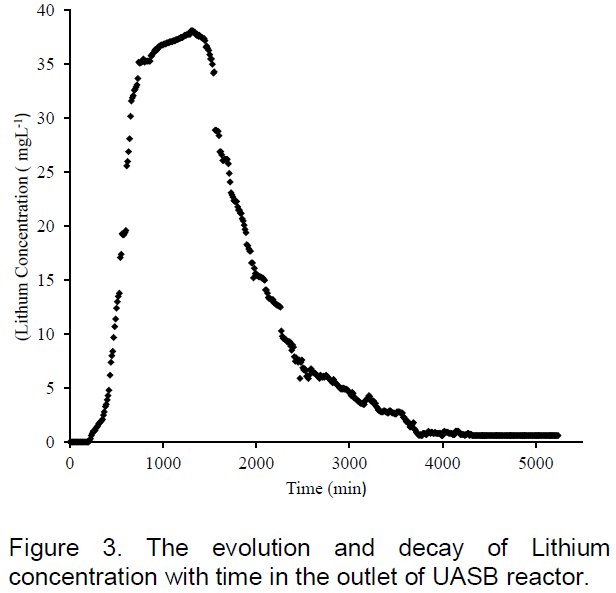 The Morril dispersive index (Table 2) was estimated according  to  Eddy  and  Metacalf  (2003)   methodology, where the log-probability plot of time vs. the cumulative percentage of the total tracer was computed and depicted as illustrated in Figure 4.
Therefore, the hydraulics of the ABR may be considered as plug-flow with a slight increment of axial dispersion since MDI was 3.22 close to 1 than 22. The volumetric efficiency (1/MDI) was 31% considered to be low signifying that the ABR had some design problems. Yet, the main parameters which give the flow pattern are mean retention time and variance at which the dispersion number and volume of dead space are estimated obtained from RTD curve by normalization of the output tracer concentration (Figure 5) according to Equation 6. 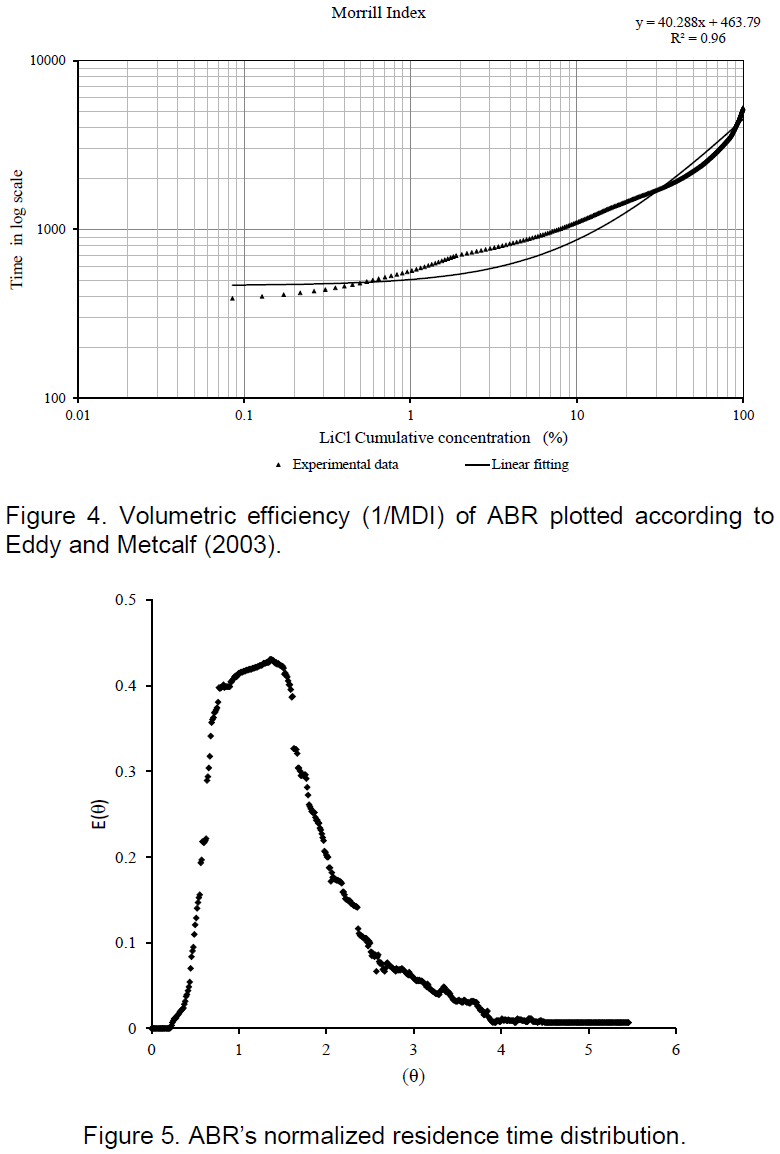 As a result, the mean residence time and variance were 24.1 and 0.22, respectively, determined from the experimental RTD curve manipulated Matlab® 2009 through numerical methods, according to Equations 1 and 2. In the same may, the dispersion number was calculated from Equation 5, using solver supplement from Microsoft Excel® 2007, whose value was 0.13. The volume of the dead space was 26% according to Equation 3. The dead space percentage is attributed to the prismatic geometry of the reactor which had many corners. Another factor related to this percentage is the settling of the total suspended solids and the rate of inactive sludge which somehow could affect the effective volume of the reactor since the swine waste are full of this variable and the sludge production rate is high. Similar results were obtained by Lourenço and Campos (2009) working with prismatic UASB reactor treating swine waste water in lab-scale, where about 66% of dead zones were reported. 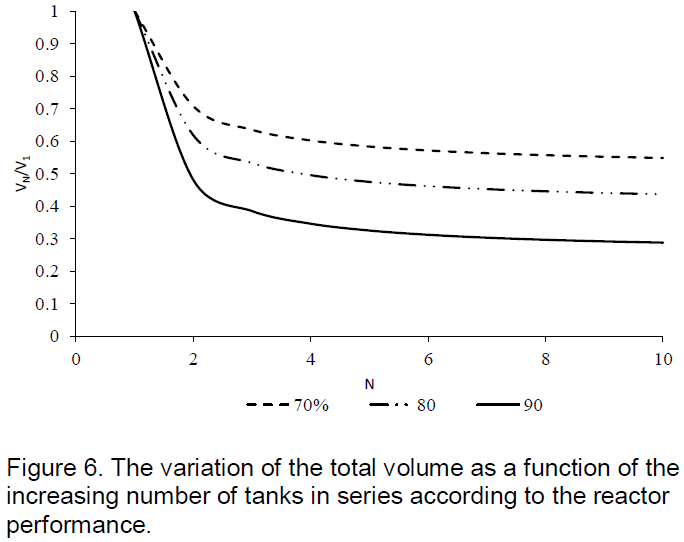 The dispersion number value was 0.13; therefore, the reactor flow pattern is described as plug-flow with a great axial dispersion. According to Levenspiel (1988) this value of dispersion number shows that the curve tracer response belongs to large deviation families’ curves from plug flow when applied for close-vessel which is the case herein studied. Using Equation 4, which simulates the actual continuous stirred tank reactor (CSTR) with equal volumes in series and the extent of mixing in the reactor, N = 4.5, meaning that the reactor behaves as a 4 CSTRs. This value reinforces the aforementioned conclusion that ABR’s flow pattern is plug-flow with a great axial dispersion.

The volumetric efficiency of ABR and the mass balance 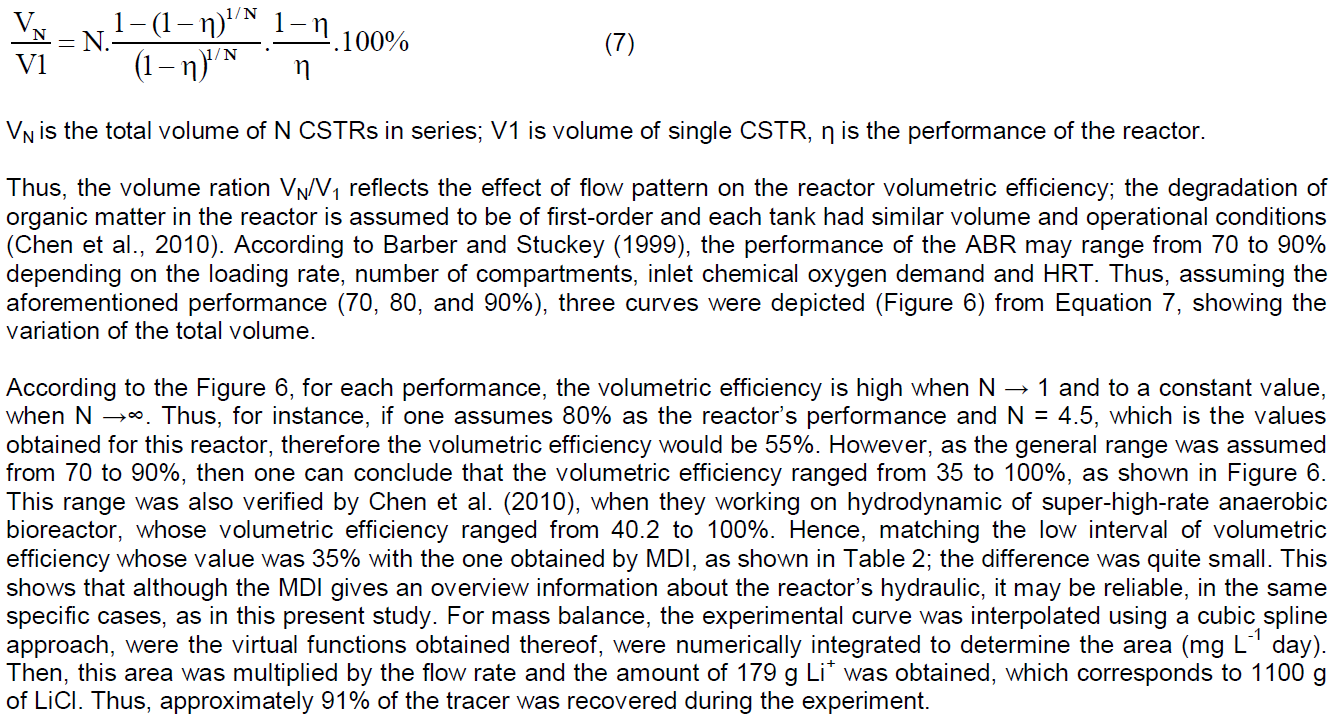 The volumetric efficiency ranged from 35 to 100%, illustrating that the reactor design was good to handle the swine effluent. According to dispersion number value (0.13), the flow pattern of the ABR shows a plug-flow trend, with a great axial dispersion. It is well known that the plug-flow fluid regime results in better efficiency in removing organic matter than a completely mixture fluid pattern. Approximately 29% of the fluid which enters into the reactor undergoes bypasses and the volume of the dead zone was about 26%. The bypass is due to the increase of the volumetric loading rate (VLR) and biogas production, which in turn is correspond to the increase of the specific methanogenic activity (SMA); whereas, the dead zone is related to the prismatic shape of the ABR where the corners segregate the stagnant liquid and even sludge particles. Both phenomena, bypass and dead zones must be minimized in order to increase the efficiency of the treatment unit.

The authors thank the Higher Polytechnic of Gaza (ISPG) Mozambique/Chókwè, the NUFFIC (Netherlands Organization for International Cooperation and Higher Education) for the sponsorship and also UFLA, FAPEMIG, CAPES and CNPq for their financial support also.