A cross-sectional study of equine trypanosomosis and its vectors in Wolayta zone, Southern Ethiopia 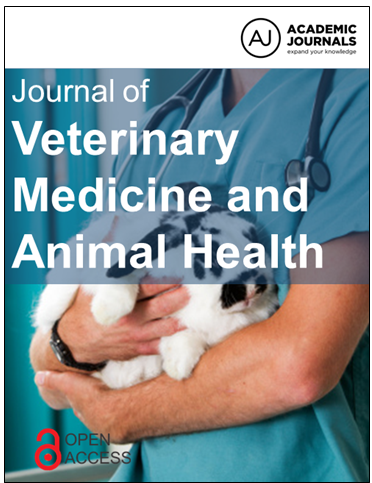 A study was conducted between October 2008 and April 2009 in Humbo, Kindo Koysha and Sodo Zuria districts (southern Ethiopia) to investigate the infection by trypanosomes in equines and the fly vectors present in these areas. A total of 214 donkeys, 20 horses and 60 mules were examined by a dark ground/phase contrast buffy coat technique and microscopy of blood smears. Trypanosomes were observed in 10.7% of the donkeys (n = 23) whereas horses and mules were negative. TwoTrypanosome species were identified: Trypanosoma congolense (52.2%) andTrypanosoma vivax (26.1%). Furthermore, mixed infection was found in 21.7% of infected animals. No significant (P > 0.05) association was found between prevalence and district of origin, body condition score (BCS), age or sex of the donkeys. There was a significant difference (P < 0.0001) in mean packed cell volume (PCV) values between infected and non-infected donkeys. Female donkeys had significantly lower (P < 0.05) mean PCV than males. There was no significant difference in the mean PCV of donkeys infected with different species of trypanosomes (P > 0.05). Overall, the prevalence of trypanosomosis reported herein is low compared to previous studies and might be associated with the reduction in tsetse density in the study area. Key words: Equine, prevalence, Southern Ethiopia, trypanosomosis, vectors.