International Journal of
Fisheries and Aquaculture 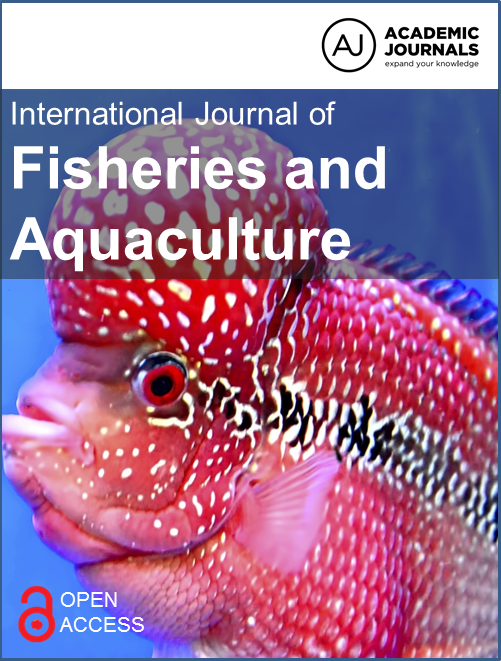 Food, especially food protein source is highly essential for healthy living, therefore, this study was aimed at boosting fish seed production and it compared the effectiveness of two different synthetic hormones: Ovaprim and Ovatide on sperm quality and reproductive performance of male Clarias gariepinus and the resulting effects on percentage fertilization, hatchability, and survival. The study was made up of three experimental groups. The first group comprising four males was injected with 0.3 ml/kg of ovatide hormone, the second group with four males was injected with 0.3 ml/kg of ovaprim hormone; and the third group, the control group with four males was not given hormones. Sperm motility duration was higher in males induced with the synthetic hormones (29.5 and 25.5 s respectively) which were significantly different (P < 0.05) from the control (18.5 s). Motility percentage was observed to be higher too in the groups treated with the hormones and was different significantly (P < 0.05) from the control. Percentage egg fertilization was similar for the groups induced with the hormones (94.4 and 87.7% respectively) while the control (63.8%) differed significantly from them. Percentage hatchability was highest in eggs fertilized with milt from ovaprim induced males (66.3%) which was significantly higher than those of Ovatide induced males (59.7%) and the Control (14.4%). Milt volume was highest in ovatide induced males (1.1 ml) and was significantly different from ovaprim induced males (0.60) and the control (0.25). Survival rate was the same for all the treatment. The hormones gave similar results except for the milt volume. Treatment with the hormones yielded better result when compared to the control, it could be inferred therefore that, the use of synthetic hormones is better in reproduction of C. gariepinus in order to boost productivity thereby ensuring abundant food protein production.