OFFICIAL PUBLICATION OF THE INTERNATIONAL SOCIETY OF AFRICAN BIOTECHNOLOGISTS AND BIOSCIENTISTS

Factors associated with irregular consumption of fruits and vegetables among health professionals in Ouagadougou, Burkina Faso

Fruits and vegetables (F&Vs) are an essential food group for humans and prevent non-communicable diseases (NCDs). The objective of this study is to know the level of consumption of F&Vs by health professionals in Ouagadougou and their determinants. This is a descriptive cross-sectional study conducted from May to August 2016 in the Central Region of Burkina Faso. It included 442 health workers according to cluster sampling. Data collection tools consisted of frequency of food consumption of fruits and vegetables.  The results showed that the level of F&Vs consumption among health professionals is very low. Only 11.5% of respondents consumed fruits every day and 21.8% did the same for vegetables and 1.4% of health professionals consumed more than five servings of F&Vs per day. Only 1.6% of health professionals surveyed had sufficient knowledge of the functions of F&Vs, and 85.8% were not aware of the recommendations of World Health Organizations regarding the consumption of F&Vs. Gender, distance from the fruit supply, and average monthly financial income were associated with the irregularity of the fruit consumption at the threshold of 5% in the univariate analysis. However, in the multivariate analysis, gender, profession, distance from fruit supply and average monthly financial income were predictive of irregular fruit consumption. The level of F&Vs consumption in health professionals is low, as is their level of knowledge of the functions of F&Vs.

Fruits and vegetables (F&Vs) are  fundamental  elements of nutrition and their consumption  is  a  healthier  way  to prevent non-communicable diseases (NCDs). F&Vs are essential for the health of individuals because they contain vitamin, minerals, trace elements, and major antioxidants that help in stimulating the immune system. According to the World Health Organization (WHO), low consumption of F&V is one of the top ten risk factors for mortality, and the global burden of disease caused by low F&V consumption is approximately 85% for cardiovascular diseases and 15% for cancers (Organisation Mondiale de la Santé (OMS), 2004). Thus, their consumption according to research would make it possible to prevent chronic diseases and some cancers (Giaconi et al., 2012; Glade, 1999; Greenwald et al., 2001; Leenders et al., 2013; Morland et al., 2006a). Previous studies have shown that if a health professional is active and has a balanced diet, he or she is more likely to advise patients on the beneficial effects of healthy diet and a physical activity (Frank et al., 2002; Huijg et al., 2015; Wells et al., 1984). For all countries, the cost of inaction is higher than the cost of non-communicable disease control measures according to WHO. In fact, some interventions to prevent and control NCDs offer a good return on investment, by earning a healthy year of life at a cost lower than the gross domestic product (GDP) per capita, and they are affordable for all countries (Chisholm et al., 2011).
In sub-Saharan Africa, the level of consumption of F&Vs is lower than the level recommended by WHO (Ruel et al., 2005). In Burkina Faso, a country located in the heart of West Africa, the level of consumption of F&Vs is very low (Ministère de la santé Burkina-Faso, 2014)with significant consequences on the prevalence and burden of chronic diseases. The relative prevalence of high blood pressure, diabetes, and high cholesterol among the Burkinabe population is estimated at 17.6; 4.9 and 3.5%. According to the WHO, a death before the age of 70 years is considered premature. Burkina Faso does not yet have specific data on NCD mortality to date, but the WHO estimates that in Burkina Faso, 32% of deaths were related to NCDs in 2013 and the probability of dying from one of the four main NCDs between the ages of 30 and 70 years is 24% (Ministère de la santé Burkina-Faso, 2016). According to the data from the national survey on the prevalence of common risk factors for NCDs (STEPS, 2013) in Burkina Faso, it was noted that only 5% of the population aged 25-64 consumed at least 5 servings of fruit and/or vegetable serving daily. In contrast, 56% of the population did not eat fruits or vegetables per day (Ministère de la santé Burkina-Faso, 2014). From this study, the fruits were also consumed on average 1.5 days per week and vegetables on an average 2.7 days per week (Ministère de la santé Burkina-Faso, 2014). In view of this low consumption of F&Vs in Burkina Faso, several questions arise concerning health professionals, such as (1) is this situation the same for health professionals? and (2) what can be the determinants? Thus, we formulated the following  hypothesis:  The  F&V consumption among health professionals in the central region is low, and the main determinants of this low consumption are sociodemographic, educational, cultural factors and related to food security in general. Studies on consumption of F&Vs in general population in Burkina Faso have already been conducted (Becquey et al., 2010; Ministère de la santé Burkina-Faso, 2014; Zeba et al., 2014). However, no literature exists on the nutritional behavior of health professionals regarding F&Vs. The health professionals play an important role in the Burkinabe health system for providing dietary advice to their patients. Therefore, they contribute to raising awareness in the population for the consumption of F&Vs. It is important to understand their habit on consumption of F&Vs. The overall objective of this study was to assess the level of F&V consumption among health professionals in the Central Region and its determinants.

Population
This study was conducted throughout the Central Region of Burkina Faso. It concerned the five health districts in the Central region, namely the health districts of Baskuy, Bogodogo, Boulmiougou, Nongr-Massom, and Sig-Noghin, as well as the three university hospitals located there. This region is located in the center of the country and is centered on the capital, Ouagadougou. It corresponds exactly to the territorial boundaries of the Kadiogo Province. This is a descriptive cross-sectional study with an analytical focus. The study population consisted of all health professionals (male and female) working in health centers in the city of Ouagadougou. Health professionals are defined as all health staff including physicians, nurses, midwives, birth-attendants (BA) and itinerant health workers (IHW). Before the data collection, authorization was granted by the Center’s Regional Health Management Department. Authorizations have also been granted by each University Hospital center for data collection. Ethical clearance and verbal consent were also obtained from institutions and participants for data collection. Data collection took place from May 06 to August 6, 2016, in Ouagadougou
Sampling
The inclusion criteria were as follows: A health professional who comes into direct contact with patients as part of the health care required by their state of health; an adult between the ages of 25 and 64 on the day of the survey aged between 25 and 64 years on the day of the survey and who gave informed consent. The sampling frame consisted of all health facilities in the Central Region. With a combined staff of 3802 health professionals, a sample of 455 previously calculated health professionals was required to constitute the sample. A systematic survey was conducted with a sampling rate of 127 to select the health facilities selected for the study. At the beginning of the sampling, the number 44 was randomly drawn and formed the first cluster. In each cluster, 16 health professionals were selected in proportion to the different profiles found in this center to administer the questionnaire. The larger the number of people in the drawn health structure, the  more clusters were formed in this structure and therefore a proportional number of individuals were selected to participate in the study.
Variables of the study
The study variables include:
1. Sociodemographic data: Age, sex, occupation, educational level, ethnicity, monthly income, household size and type of housing.
2. Nutritional data: Fruit consumption, vegetable consumption, number of days of fruit and/or vegetable consumption and number of servings consumed during a day. For vegetables, one serving was equivalent to a bowl of fresh and raw green vegetables (in leaves, spinach, salad, etc.), half a bowl of other vegetables, cooked or raw, cut into small pieces (tomatoes, squash, green beans, etc.) or half a bowl of vegetable juice. For fruits, one serving was equivalent to a medium-sized fruit (orange, banana, apple, etc.) or half a bowl of fruit in pieces, cooked or in syrup or half a bowl of fruit juice (without artificial flavors).
3. Food security data on F&Vs: High cost of F&Vs, permanent availability of F&Vs and distance of supply from home.
4. Data on the knowledge of the functions of F&Vs and knowledge of WHO recommendations on F&V consumption. The variable ‘knowledge of recommended daily servings according to WHO’ guideline refers to good knowledge if the respondent gives a number of servings more than 5 or equal to 5 and insufficient otherwise.
The variable ‘knowledge of the functions of F&Vs is composite variable computed using 5 questions. A score of 5 means that the participant has a good knowledge while a score between 3 and 4 means average knowledge and less than 2 refers to poor knowledge. A structured questionnaire was used for data collection. It was adapted from tools used for STEPS surveys. It has been pretested in interviewing ten health professionals and has been validated before beginning data collection.
Data analysis
Data entry was made by EPIDATA software version 3.1, and the analysis was possible using SPSS software version 22 and STATA version 13. Quantitative variables were expressed as average (± standard deviation). The qualitative variables were expressed in frequency.
The comparison of proportions was done using the chi-square test. The analysis of factors associated with an irregular F&V consumption was conducted using descriptive statistics and binary logistic regression. Two analysis models are presented:  the first model (initial model) where the variables were associated two by two with the dependent variable and the final model that links all the explanatory variables with the variable to be explained.  The statistical significance level for the analyses was p ≤ 0.05 with *** <0.001, ** <0.01, * <0.05.  The dependent variable called ‘irregular consumption of F&Vs’ was represented by the proportion of people who did not consume fruits and/or vegetables every day. The independent variables were grouped into the following factors:
1. Socio-demographic factors: Age (<35, ≥35), sex (male or female), occupation (physician, midwife, nurse and IHW), household size (<5, ≥ 5) and marital status (in union, not in union);
2. Food security factors: Year-round availability of F&Vs (yes or no), high F&Vs costs in relation to income (yes or no) and location of F&Vs supply away from home (yes or no); and
3. Knowledge factors: Knowledge of F&V functions (insufficient, average, and good) and WHO recommendations (insufficient, average, and good). 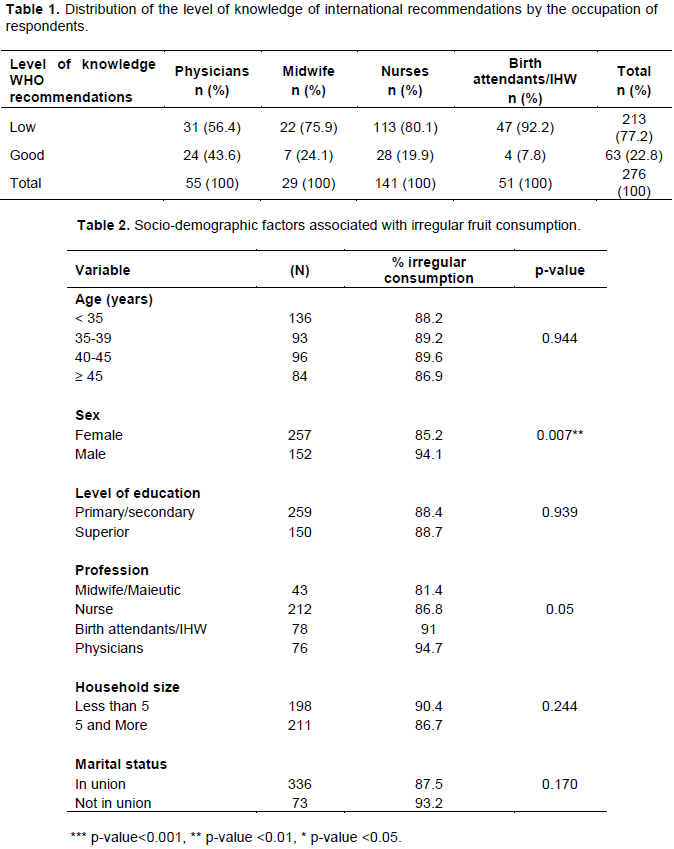 The study design had some limitations, which were rectified up to some extent. The health facilities were selected by a cluster to participate in the study. Therefore, the first-level bias can occur. Then, the selection of the 16 people from each health facility for the study may not be proportional to each occupational category because of the absence of some staff at the time of the survey. Therefore, to prevent this, before moving on to the next health facility, we ensured that the number of people surveyed was proportionally representing the sample with respect to the size of each professional category.
The data collection period lasted from June to August 2016, which shows low vegetable presence and high mango production. Despite this, the results of the study are valid because even with a high availability of vegetables, the availability of fruits is low in the Central Region because of the alternation of the favorable season, that is, high production of either fruits or vegetables at a given time. The variables related to food security were mainly based on the respondent’s declarative data without any possibility of controlling possible biases.

The authors thank the healthcare participants of the study for their time and the central regional health system manager for authorization to conduct this study. Additionally, we thank University of Senghor for financial support of this study.