OFFICIAL PUBLICATION OF THE INTERNATIONAL SOCIETY OF AFRICAN BIOTECHNOLOGISTS AND BIOSCIENTISTS

Schistosomiasis, an environmentally-mediated disease, contracted by swimming or wading in freshwater bodies harbouring the snail intermediate hosts of the genus Schistosoma consisting of five human species: S. haematobium S. mansoni, S. japonicum,   S. intercalatum and S. mekongi. Transmission is on the increase with consequent adverse effects on children’s health and school attendance. There is a dearth of information in mapping and prediction of the disease transmission and distribution in the  study area. This study made use of Geographic Information System and Remote Sensing (GIS/RS) in mapping and prediction of the disease in some affected areas of the state. There was a high prevalence of urinary schistosomiasis in the study communities. There is considerable interest in the literature on disease mapping to interpolate the occurrence, risk and probability from prevalence disease data. There is the need for continuous mapping using GIS/RS,  and develop further risk model maps for the whole state using this approach to further understand the spatial pattern of urinary schistosomiasis in Nigeria. SPM is based on the number of interventions. The higher the number of interventions is the lower the prevalence of infection. This study will serve as a reliable baseline data for intervention planning in the State.

Schistosomiasis is an environmentally-mediated disease that depends on the presence of suitable habitats for snails which serve as intermediate hosts for the causative parasites (Morenikeji and Idowu, 2011).
Human water contact activities
Studies in  Africa  and  beyond  have  revealed   different human water contact patterns, reflecting different modes of life and different characteristics of available water bodies (Owojori et al., 2006; Ugbomoiko, 2010; Hassan et al., 2012). Generally, the various types of human water contact activities can be classified as recreational, domestic, personal and occupational and the extent of body exposure may be classified as limited, partial or complete exposure (Ugbomoiko, 2010).
Recreational contacts involve swimming, bathing  and
playing in water; generally swimming and playing in water results in more frequent and more intense contacts than the other types of contact. Furthermore, children between the ages of 5 and 19 years normally swim and play frequently for longer time than adults (Clennon et al., 2004). Domestic activities include fetching water, washing clothes, utensils and other domestic materials (Oladejo and Ofoezie, 2006). Females of all ages usually dominate in domestic water contact activities except in areas where for religious reasons women of certain age groups rarely participate in outdoor activities (Owojori et al., 2006; Ugbomoiko, 2010). Occupational contacts include fishing, irrigation and watering animals and are generally performed by men except in some communities in Africa where fishing is also a female occupation (Owojori et al., 2006)
Snail studies
The presence of types and abundance of fresh water snails has been one of the predisposing factors of Schistosomiasis transmission. The variation in the population of these species in Owala/Erinle dam is seasonal. The variation in the population of these species in Owala/Erinle dam is seasonal, increasing from the onset of rainy season to its peak during the dry season.  It is noteworthy that B. globosus is the only intermediate host for S. haematobium infection and its density in Nigeria is focal and seasonal.
Available information shows the disease is endemic in Osun State and the prevalence and intensity of the disease remain unabated. There was a Geographic Information System predictive survey of Schistosomiasis in Nigeria. However, there has never been any published research on the use of Land Use/Land Cover /Remote Sensing in assessing schistosomiasis in Olorunda, Ifelodun and Odo-Otin L.G.As in Osun State, Nigeria. This study therefore pioneers such research and facilitates a reliable future intervention target planning and prevention of schistosomiasis in Osun State.
During the last twenty six years the control of schistosomiasis has remained a mirage. There has been a continuous increase in the pattern  of  transmission  in Osun State (Table 1).

The scientific study of the spatial epidemiology of schistosomiasis and other helminths has been greatly enhanced by the use of Geographical Information Systems (GIS) and Remote Sensing (RS) over the past 20 years (Robinson, 2000; Brooker, 2007; Ekpo et al., 2008) There is considerable interest in the literature on disease mapping to interpolate and estimate the disease occurrence or risk of disease from affected communities onto a continuous surface. In addition to many interpolation techniques available, the geostatistical method of kriging was used. The empirical Bayes step has the advantage of shrinking the unstable and often extreme estimates to the global or local mean, and also has a stabilizing effect on variance by borrowing strength, as well. Negative interpolation is prevented by choice of the appropriate kriging method; the proposed mapping method applied to this study was spatial interpolation based on ordinary and universal kriging. The principle is based on determination of unknown from known prevalence values in the study areas.

Study area
A detailed description of the study area was published by Oladejo and Ofoezie (2006). The study was carried out in Erinle /Owala Reservoir adjoining communities; Ilie, Oba-Oke, Oba-Ile (Olorunda Local Government Area (LGA)), Eko-Ende (Ifelodun LGA) and Ore (Odo-Otin LGA) approximately located between latitude 7° 30’N and 7° 54’N and between longitude 4’°36”E and 4’° 39”E (Figures 1 and 2). 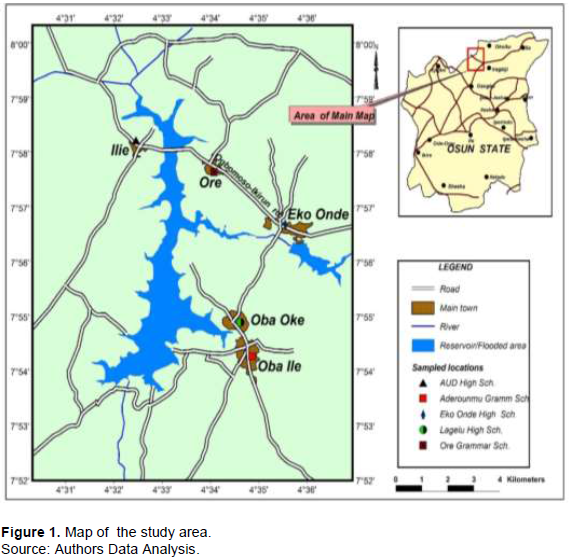 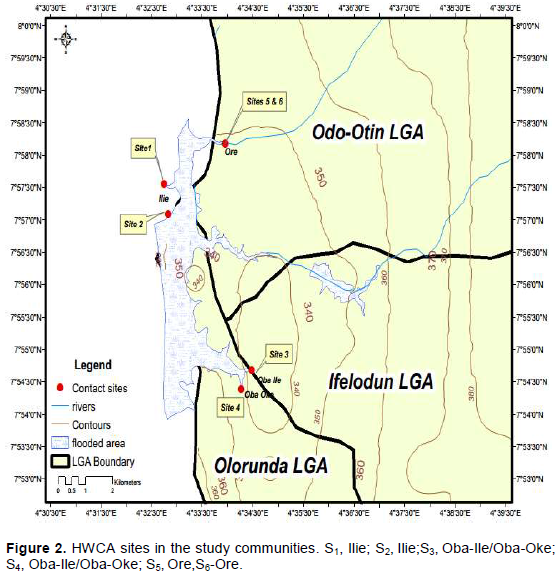 Climate and rainfall
The climate of the study area is described as humid tropical environment (Orimoogunje, 2005), where the temperature is high throughout the year with no marked seasonal variations. Rainy season covers a period of 9 months (March–November) annually, but intensive rainfall starts from April to October and peaks in June/July and/or September. Dry season lasts for 3 months (December–February), but there could be little rains during the dry months. Annual average daily relative humidity is about 80% in the forest reserves (Oladejo and Ofoezie, 2006).
Soil texture
The soil in the study area largely is humus ferrogenuos which supports the cultivation of tree and arable crops such as cocoa, rubber, nuts and palm trees citrus, cola, maize, vegetables, cassava, and yam.
Vegetation and land use
Tropical rain forest dominates other vegetation types in the study area. Different types of crops are planted in the region. For instance, crop such as cocoa, rubber, kola nuts and oil palm trees are planted. In addition, it provides conducive environment for the thriving of primary activities (agricultural occupation), secondary activities (traditional and modern crafts e. g weaving tailoring, hair dressing etc), small-scale distribution (hawking, petty trading, retailing etc) and tertiary activities (for instance transport operations, restaurant, dry cleaning etc).

Mapping and production of predictive risk models
The spatial distribution and predictive risk model maps were developed using prevalence data from the infection study with kriging interpolation method and logistic regression respectively in Arc GIS 10 software using Mathematical Algebra Calculator and extension of Spatial Analyst Tool.
Simple proportion projection model
This is used to estimate or project the prevalence of schistosomiasis in the near future in the study communities. Expected number of cases or predicted number of cases is directly proportional to the product of the prevalence in the base year or previous year (b) and population of the community in year t and inversely proportional to population of the state in the base year (b).
The model incorporates intervention (K which is a constant) over years, that is, the higher the number of the interventions is the lower is the population at risk and the rate of infection. It is given by Ep. X (RD/P) b (Pt).

Predictive risk models
The    predictive    risk    maps    suggest     that     urinary  schistosomiasis is widely distributed and occurring in all the three Local Government Areas (LGAs) in the state (Figures 1 to 3). The highest risk areas (66.20% prevalence) however are confined to Eko-Ende community in the study area. The predictive risk proportion model showed that 10.5% of the total population is at risk of infection annually. The DEM model (Figure 6) showed that the higher the topography, the lower the prevalence of infection in the study area. The result of this work showed a stronger influence on the geographical variation of infection pattern compared with the environmental covariates investigated.  This study agrees with the work of Clements et al. (2006a) who developed Bayesian geostatistics model to predict the spatial distribution of S. haemotobuim and S. mansoni infection across a large area of Tanzania. This approach highlighted important species – specific differences in observed spatial correlations, with correlations occurring over greater distances for S. haematobium. The issue of distance could be overcome using probability  risk  model (Figure 4). Also, maps of prediction error highlighted which areas need further investigation, if the maps are to be uniformly reliable.
Geo-spatial distribution of urinary schistosomiasis infection
Figure 3 shows that a mean prevalence >50% was recorded in all the three LGAs. Moreover, Eko-Ende had the highest risk of infection among all the five communities. While the distribution pattern of infection revealed that the disease is widespread occurring in all the study communities in the state (LGAs) (Figure 4), the elevation-based spatial map shows that Ilie on the highest elevation had the lowest infection level; Eko-Ende on lowest elevation had highest infection (Figure 5). Figures 6 and 7 show that the risk of infection and probability of HWCA is higher in Oba-Oke than Oba-Ile. 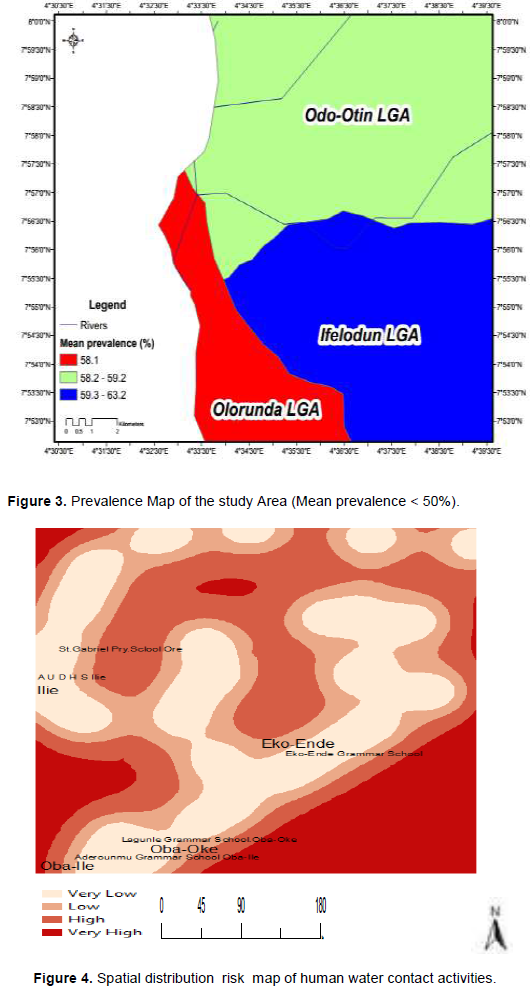 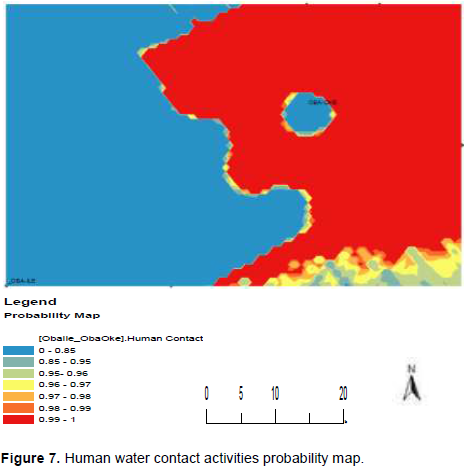 Probability of occurrence  of  infection  was  > 0.80  and  mean prevalence (59.0%). The spread of the infection revealed that Eko-Ende is the most infected community but not all the areas are highly infected, some have very low infection levels (Figure 8). 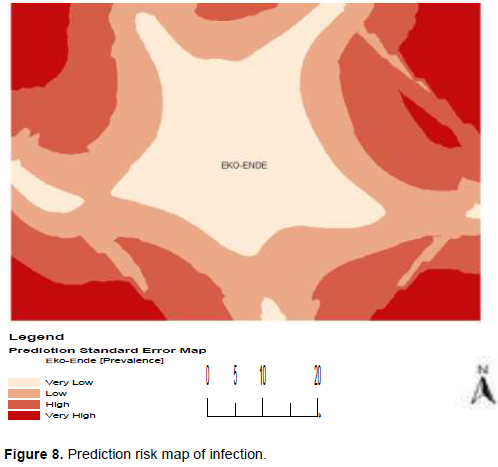 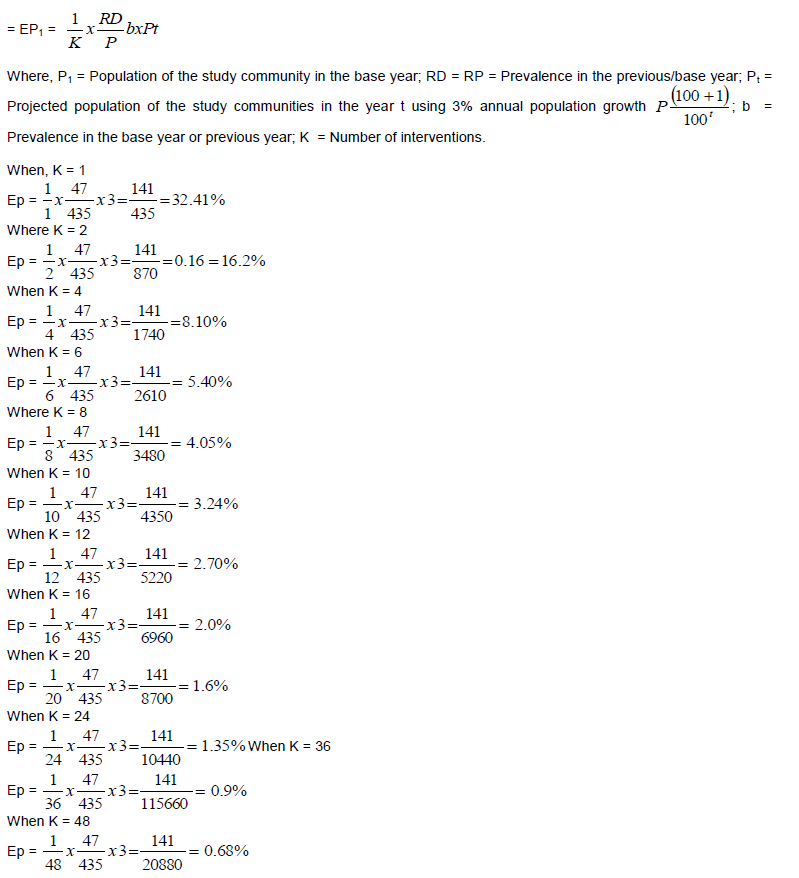 The study has shown a progressive increase in transmission of schistosomiasis (11%) in the last 26years ago (Adewumi et al., 1993), 46.6% 13 years ago (Oladejo and Ofoezie 206) and this study 59.8%.
The result of this work showed a stronger influence on the geographical variation of infection pattern compared with other covariate-factors investigated. This study agrees with the work of Clements et al. (2006) who developed Bayesian geostatistics model to explain the spatial distribution of S. haemotobuim and S. mansoni infection across a large area of Tanzania.
This approach highlighted important species – specific differences in observed spatial correlations, with correlations occurring over greater distances for S. haematobium. The issue of distance could be overcome using Probability risk model. Also maps of prediction error highlighted which areas need further investigation. Finally, the exploratory disease spatial risk maps could easily understood to by the map users/audience.

1. There is the need for continuous mapping using GIS/RS, health education, and provision of alternative sources of water, mass drug administration and freshwater snail control in the study communities.
2. There is a need to develop further risk model maps for the whole state using this approach to further understand the spatial pattern of urinary schistosomiasis in Nigeria.
3. The study recommends the use of environmental variables from remotely sensed data sources together with demography datasets to estimate the population at risk in the state and other parts of Nigeria.
4. There is need to put the necessary mitigating measures in place by carrying out an Environmental Impact Assessment before and after a dam is constructed for sustainable LU/LC pattern, less pollution towards sustainable growth.
5. The study calls for integrated approaches to promote prevention and control of schistosomiasis.