Irrigated agriculture consumes the majority of the available water. Irrigation accounts for approximately 70% of total water abstraction and 60-80% of overall water usage (Huffaker and Hamilton, 2007). In order to feed 8 billion people by 2025, the irrigated area should be enlarged by more than 20% and the yield of irrigated crops improved by 40% (Lascano and Sojka, 2007). Improving agricultural water use efficiency is critical to achieving this goal. Many studies have been undertaken to  gather   experience   in   watering   crops   to  enhance performance, efficiency, and profitability, and water-saving irrigation research will continue (Sleper et al., 2007). Agriculture's long-term water management has become a key challenge. Acceptance of methods for conserving irrigation water while keeping acceptable yields may help to preserve this increasingly scarce resource. In locations where water is a scarce resource, farmers may find that improving water productivity is more beneficial than boosting crop output. As a result, research should be established and carried  out  with  the goal of increasing agricultural water productivity through various water-saving strategies in combination with the use of the correct fertilization scheme (Yakubu et al., 2019).

Wheat yields are increasing at an average rate of 0.9% globally, falling short of the required double crop production by 2050 (Ray et al., 2013). Nutrient efficiency advances, which have been observed in developed countries for the past three decades, will have an impact on future yield. Farmers, on the other hand, continue to use minimal fertilizer and deplete soil nutrient stocks across broad areas. This is especially true in Sub-Saharan Africa. Besides, when deciding whether or not to use fertilizer, smallholder farmers must also consider risk and uncertainty. Plant nutrients and water are complementary inputs; when water is not a constraint, the incremental return on fertilizer inputs is higher, and vice versa (Drechsel et al., 2014). The total productivity of the farming system, which includes crop output and soil nutrient levels, should be evaluated by combining the performance of agricultural inputs such as fertilizer and water use efficiency. Excessive and wasteful utilization of nitrogen fertilizer raises crop production costs and pollutes the environment (Galloway et al., 2008; Anas et al., 2020). The main contributing management factors to the crop yield gap are soil fertility and fertilization (Beza et al., 2017). Wheat producers would improve nitrogen fertilizer use under irrigated conditions, lowering the risk of environmental pollution. Nitrogen is a critical component for crop development and growth (Prieto et al., 2017). Water and nitrogen are the two most common limiting elements in the agricultural system, both of which are important for wheat growth and productivity. However, their optimal integration is not well identified, particularly in the study area. Therefore, this study was undertaken to determine the nitrogen rate and required irrigation level that optimize wheat yield in Amibara, a semi-arid part of Ethiopia.

The  research  took  place in Ethiopia's Werer Agricultural Research Center, which is located at 9°16'N latitude and 40°9'E longitude, with a mean altitude of 740 m above sea level. At the experimental site, the soil textural class was silty clay, with a bulk density of 1.3 g/cm3. On a mass basis, the field capacity and permanent wilting point were 39.5 and 23%, respectively. The climate in the area is semi-arid, with an average annual rainfall of 590 mm and a bi-modal low and erratic rainfall pattern. The average temperature ranges from 26.7 to 40.8°C. The amount of rainfall during the farming season is described in Table 1.

Prior to sowing, soil samples were collected at a depth of (0- 30 cm) across the experimental field, composited, and soil physicochemical properties were analyzed at the Werer Agricultural Research Center laboratory; the results are described in Table 2. Before sowing, the total nitrogen value was 0.06% at a depth of 0-30 cm. The experimental site has a low total nitrogen content, according to the soil nitrogen classification category (Tadesse et al., 1991).

The experiment was conducted for three consecutive years, 2017/2018, 2018/2019 and 2019/2020 at the Werer Agricultural Research Centre experimental field. The treatment combinations are presented in Table 3. The experiment was conducted in a split plot design. The treatments were replicated three times and randomized at both the main and sub-plot levels. The irrigation levels (100, 75 and 50% ETc) were in the main plot while nitrogen fertilizer rate treatments (0, 23, 46, 69 and 92 kg/ha) were assigned to the sub plots. 100%ETc with 0 level of N was used as a control treatment for this experiment. Each application of water was measured using a 3-inch Parshall flume. A representative soil sample was taken from the experimental site for soil physicochemical analysis. The plot size for planting was 3.6 m by 5 m (18 m2), accommodating 6 rows spaced 60 cm apart. The wheat (Ga’ambo variety) seed was sown by drilling on both sides of the rows at a rate of 100 kg/ha. For data collection and measurement, four central rows with a net plot size of 12 m2 were used. At the time of seeding, all plots were given 100 kg/ha of triple superphosphate (TSP). Nitrogen, on the other hand, was applied in splits in the form of urea. Half at 20 days after sowing and the remaining half at 48 days after sowing. Following the water balancing Equation 1, the sum of daily ETc was added between two irrigation events.

Where, ETc is crop evapotranspiration (mm), P is precipitation (mm), I is irrigation (mm), D is deep percolation (mm), and ΔS is change in soil water storage (mm).

The yield data used in this study were estimated using yield sampling methods. This was achieved by using the crop cut methods by demarcating a plot 3 m by 3 m in size. Then, followed by harvesting the produce from the plots, threshing, winnowing, and drying the produce, and later determining the dry weight.

The three year combined yield, yield components and water use efficiency data were subjected to statistical analysis using the procedure of the SAS package (Cary, 2011). The mean comparison was done by the Least Significant Difference (LSD) test at the 5% level of significance (Gomez and Gomez, 1984).

For economic evaluation of various treatments, partial budget analysis techniques were used in accordance with the procedure of International Maize and Wheat Improvement Center-CIMMYT (1988). The three-year combined average grain yield was reduced by 10% to account for differences in yields caused by differences in agronomic management between researchers and farmers using the same treatments. Costs for land preparation, water applied, fertilizer, seeds, pesticide, sacks, and labor for production are all included in the economic data. The cost of the sack, water, and fertilizer differed between treatments. Following the CIMMYT (1988) procedure, gross income, total variable costs, net benefits, and marginal rate of return were calculated from adjusted grain yields. The following Equation 2 was  used  to  determine marginal  rate  of return.

The following Equation 3 was used to compute water use efficiency as a ratio of grain yield to total crop evapotranspiration (ETc) during the course of the growing season (Zwart and Bastiaanssen, 2004).

Where, WUE is water use efficiency (kg/m³), Y is crop yield (kg/ha) and ETc is the seasonal crop water consumption by evapotranspiration (m³/ha). 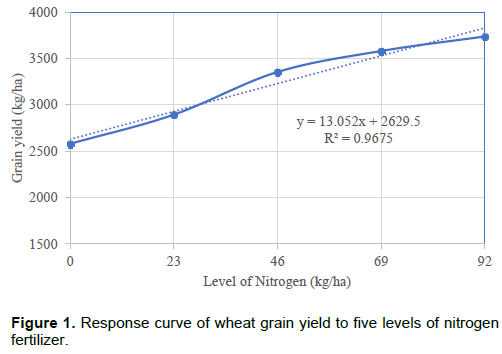