Field trials were conducted at the University Nangui Abrogoua, Abidjan, southern Cote d'Ivoire during the 2015 and 2016 short rainy season to study the performance of maize (Zea mays L.) and cowpea [Vigna unguiculata (L.) Walp] intercrop as influenced by row arrangement. A randomized complete block design (RCBD) with five treatments (SM; SC; MC; 1M1C and 2M4C) and three replications was used. SM was sole maize, SC was sole cowpea, MC was intra-line pattern, 1M:1C was inter-line pattern and 2M4C was strip-intercropping maize-cowpea. The results revealed that there were significant effects of cropping patterns on growth and yield components of maize and cowpea crops. Among the cropping systems studied during both years growing seasons 2015 and 2016, the highest yield advantage for cowpea and maize (land equivalent ratio = 1.62; 1.10) was obtained from intercropping pattern 2M:C4. The observed Land equivalent ratio (LER) values correspond to 38.27 and 9.90 % of lands saved which could be used for other agricultural purposes. With this cropping pattern, land equivalent coefficient (LEC) values (0.62 and 0.30) indicated that, greatest productivity per unit area was achieved by growing the two crops together. In this cropping pattern, both crops were highly complementary and most suitable in mixture as confirmed by competitive ratio (CR) values of 0.72.

During the recent decades, food requirements have increased sharply, while the availability of cultivated land has decreased considerably. Thus, the increase in yield per unit area remains the main way of increasing agricultural production. Due to this high pressure of food, agriculture is now intensive with high inputs in irrigation, seeds and chemicals. This has caused serious environmental problems (Zhang  et  al.,  2004),  including groundwater pollution by soil nitrates (Ju et al., 2006), the emission of gases into the air (Zhang et al., 2012) and soil acidification (Blumenberg et al., 2014). To ensure food security and environmental quality, it is essential to search best management practices which involve suitable cropping systems that can efficiently utilize solar and soil resources with minimum nutrient inputs.
In cropping systems, there are often two or more crop species grown in the same field for a certain period of time, even though the crops are not necessarily sown or harvested simultaneously. In practice, most intercropping systems involve only two crops, as inclusion of more crops results in higher labor costs (Wu and Wu, 2014).
Traditionally, small farmers used intercropping to increase the density of their products and to ensure the stability of their output. The success of intercropping systems is due to an enhanced temporal and spatial complementarity of resource capture, for which both above-ground and belowground parts of crops play an important role (Midega et al., 2014).
Cereal crops intercropping with legumes are a popular option in intercropping. Even though the two crops compete for soil N as they both need it for the growth, the competition drives legumes to fix atmospheric N2 in symbiosis with Rhizobium (Caviglia et al., 2011). This actually results in complementary utilization of N by the crops, which is of particular importance in soils where inorganic N is limited or over-fertilized.
Numerous studies have reported that intercropping can increase crop yield (Zhang et al., 2007) because of efficient utilization of nutrients (Zhang and Li, 2003) and light (Zuo and Zhang, 2008), and enhanced positive interactions between crops (Betencourt et al., 2012). However, most of these studies were focused on effects of different intercrop species (Zhang and Li, 2003). Despite the importance of intercropping, very few reports are found in the literature concerning the effect of the pattern of intercropping system on the growth parameters and productivity of the component species. The available data refer mainly to plant resources availability, planting date (Maurice et al., 2010) and plant density (Ewansiha et al., 2015). Thus, rare studies have been undergone to investigate effects of ratio of rows between crops within a specific intercropping system.
Row arrangement is one of the important management tools that could be explored to minimize competitive pressure created by a component crop in an intercropping system (Maluleke et al., 2004).
The management of mixed crops in the traditional agricultural systems of Cote d'Ivoire is unpredictable  and without sufficient attempt to model crops for an effective interception of essential resources. There is neither report in literature about optimum row ratio of maize intercropping with cowpea, nor explanation of the processes behind. Therefore, the objective of this study was to investigate the effects of row arrangement on the growth and yield of the maize and cowpea crops, in intercropping trials at University Nangui Abrogoua. Information on these subjects is essential for a better understanding of the system that will help management decisions.

Description of the study site
The experiment was conducted during the 2015 and 2016 short rainy season at the research farm of the Natural Sciences Unit of Formation and Research (UFR SN), University Nangui Abrogoua, (5°23 N latitude, 4°11 W longitude and 100 m above the sea) in the southern of Cote d’Ivoire. The site is characterized by two rainy seasons and dry seasons.
The first and second growing seasons (herewith referred to as long and short rainy season, respectively) last typically from March to July and October to November, respectively. A short dry spell occurs from August to September. The major dry season starts in December and lasts through end of February or beginning of March. The total rainfall registered was 2161.86 and 1433.34 mm and the average annual temperature was 26.7 and 27°C in 2015 and 2016, respectively (Figure 1).

Plant material, experimental design and treatments
Maize cultivar "EV8728" (early-maturing, 90 to100 days) and cowpea cultivar "Touba" (early maturing, erected) were used in this study. Both seeds were obtained from the National Center of Agronomic Research (CNRA), Korhogo Regional Office (Cote d'Ivoire). Experiments were carried out from September to December 2015 and 2016 and were arranged each year in randomized complete blocks design (RCBD) with three replications which included five treatments with different planting patterns. A constant 75 x 50 cm inter and intra-row spacing, respectively, was maintained in both cropping systems. Experimental plots used for this study were 15 m2 (3 × 5 m) sizes each.
The treatments were: maize and cowpea in sole culture (SM, SC) population (49231 plants/ha), maize and cowpea in intra-row pattern M:C (maize holes alternating with those of cowpea) population (24615 plants/ha), maize and cowpea in single-line pattern 1M:1C (a line of maize alternating with a cowpea line) population (24615 plants/ha) and strip-intercropping maize-cowpea 2M:4C (2 rows of maize alternating with 4 rows of cowpea) population (19692 maize plants/ha and 29538 cowpea plants/ha). Before the start of the study in September 2015, soil was sampled randomly  in  the  field  by  using  a  soil  auger  to  determine  basic physical and chemical properties of soil.
Agronomic practices
Three maize seeds were sown per hole and later thinned to one plant per stand at two weeks after planting (WAP). Cowpea seeds were sown at six weeks after maize was sown. Four seeds of cowpea were sown and later thinned to two plants per stand at two WAP. Cowpea was harvested when the pods turned brown and seeds were at the hard-dough stage, which indicated that moisture content is between 14 and 16% (Dugje et al., 2009). Maize was harvested when the signs of senescence appeared at cob maturity (Ijoyah and Jimba, 2012).
Data collection and analysis
Measurement of plant growth parameters and yield and yield components
To determine the response of maize and cowpea crop in row arrangement intercropping, data were collected on growth parameters, yield and yield components, vis., plant height (PH), stem diameter (SD), leaf area (LA), total above-ground biomass (TB), 100-seeds weight (100 SW) and total grain yields (TGY).
Leaf area of cowpea (LAC) was calculated by the formula: 0.662 x L0.952 x l1.052 (Dagba, 1974). Leaf area of maize (LAm) was calculated by the formula: L x l x 0.75 (Bonhomme et al., 1982).
Assessment of the advantages of maize/cowpea intercropping system
Land equivalent ratio: Land equivalent ratio (LER) is the most common index adopted in intercropping to measure the land productivity. The LER is a standardized index that is defined as the relative area required by sole crops to produce the same yield as intercrops (Mead and Willey, 1980). The  LER  is  the  ratio  of  land required by pure (sole) crop to produce the same yield, where intercrop was determined according to the following formula:
LER = Ym-ic/Ym-sc + Yn-ic/Yn-sc
Ym-ic = intercropped yield of maize;
Ym-sc = sole yield of maize;
Yn-ic = intercropped yield of cowpea;
Yn-sc = sole yield of cowpea;
If LER is greater than 1.00, there is a yield advantage by intercropping; otherwise there is no yield advantage. The data on land equivalent coefficient (LEC) and percentage land saved were determined as described by Ijoyah et al. (2013) and Workayehu (2014) using the formulae below:
LEC = LERm × LERc
Where LERm is the partial LER of maize and LERc is the partial LER of cowpea
The competitive ratio (CR) as described by Willey and Rao (1980) was determined using the formula: CR = Lm/Lc, where Lm: Partial LER for maize; Lc: Partial LER for cowpea. Data collected were subjected to analysis of variance (ANOVA) using the software Statistica version 7.1. Differences between treatment means were separated using the Newman-Keuls test procedure at 95% confidence interval.

Physico-chemical characteristics of the soil of the experiment site
Physico-chemical analysis of the  soil  samples  collected at 0 to 30 cm soil depth indicated that, the soil reaction was acidic with pH values of 4.83. In both trials Total nitrogen (N) content, organic carbon (C), potassium (K) and available phosphorus (P) were high. Cation exchange capacity (CEC) and exchangeable bases (Na, Ca and Mg) were low (Table 1). 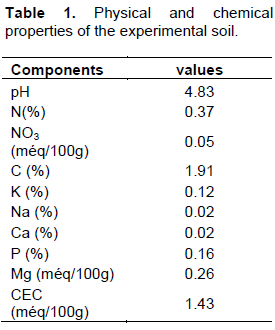 Effect of cropping systems on the growth of maize and cowpea plants
The growth of maize and cowpea plants evaluated in terms of plant height, stem diameter and leaf area is recorded in Table 2. The analysis of the results showed that plants height of maize in sole culture during the 2015 and 2016 rainy short seasons was significantly lower than those of the plants in intercropping systems with the cowpea.

For farmers who have limited sources, income and stability yield of agricultural systems is very important. Several crops grown together, fail to produce a product, could be compensated by other crop, and thereby reduce risk. Risk of agronomy, failure in multi cropping systems is lower than pure cropping systems. The results reported in this study showed that the optimal intercropping system was strip intercropping of 2 maize rows with 4 cowpea rows (2M: 4C), which had positive effects on yield and environment.
In general, even though yields of the intercrop components were lower than their sole crop counterparts, the intercrop components were more productive than the sole crop components as evidenced by the LERs and the land saved is obtained with the 2M: 4C cropping system. It can be concluded that in Abidjan a location within the Forest agro-ecological zone of Cote d’Ivoire, for higher yield, maize should be introduced with cowpea using cropping pattern 2M: 4C. It is however suggested that further investigation could be conducted across different agro ecological zones of Cote d’Ivoire.