The sweet potato weevil, Cylas formicarius (Fabricius) (Coleoptera: Brentidae), is an important insect pest of the sweet potato, Ipomoea batatas (L.) Poir.. C. formicarius attacks sweet potatoes both in the field and during storage, thus causing significant damage and yield losses between 3 and 80% (Kandori et al., 2006). Adult C. formicarius  damage   the   vines,   crowns,  petioles,  and storage roots of sweet potatoes, and the females lay their eggs under the epidermis of older portions of vines and storage roots. The larvae then dug tunnels into the vines and storage roots, into which they excrete feces (Reddy et al., 2014). Feeding injuries disrupt the translocation of water and nutrients in plants and induce storage roots to produce  terpenoids   and   phenolic   compounds,  which causes storage roots to develop a bitter taste, and unpleasant smell, ultimately making them inedible (Akazawa and Uritani, 1960).

Although a number of secondary metabolites that were named botanical pesticides have shown a controlling effect on Cylas spp. (Leng and Reddy, 2012; McNeil et al., 2012; Junor et al., 2008; Williams et al., 2003; Nta et al., 2018; Pan et al., 2019), their efficacy and mode of action have not been compared. Therefore the botanical insecticide best for controlling C. formicarius cannot be determined.

In this study, the efficacy and mode of action of 10 botanical insecticides with high insecticidal effect and wide insecticidal range against C. formicarius adults were evaluated. These insecticides were 25% pyrethrins, 50% rotenone, 6% celangulin, 1% stemonine, 98% matrine, 99% nicotine, 70% cnidium lactone, 1% veratrine, 98% tea saponin, and 2% toosendanin. The findings of this study provide basic data for the development of a powerful botanical  insecticide  to  control  C.  formicarius.

Damaged sweet potato storage roots, containing C. formicarius larvae and pupae, were collected from Guangxi University Farm (Nanning, China) in December 2014 and were placed in netting bags (30 cm × 60 cm; mesh diameter 0.25 mm). Then, they were transferred to an insect rearing room at the College of Agriculture and were raised at 24 ± 2°C, 70-80% relative humidity, and a photoperiod of 14:10 h (L:D). When adult weevils appeared, additional sweet potatoes were added to the netting bags to enable reproduction and subsequent larval development. The second-generation adult weevils (5-8 days after emergence) were collected for experiments. The sweet potato variety ‘Jidanhuang’ was used in the experiment. The storage roots of sweet potatoes were washed with tap water to feed weevils. The washed storage roots were cut into strips (2 cm × 3 cm × 7 cm) for bioassay.

A Y-tube olfactometer was used for olfactory tests to determine the repellency effect of different botanical insecticides on C. formicarius adults. The two arms of the Y-tube olfactometer (two arms and one stem, 15 cm in length, each at a 120° angle, and with an inner diameter of 2.0 cm) were connected to odor bottles. One of the odor bottles contained the botanical insecticide. An air pump (VLC6503-24V with a speed governor TAA02-24V, Chengdu Qihai Electromechanical Manufacturing Co. LTD, Chengdu, China) was connected to the stem of the Y-tube, and was used to draw charcoal-purified clean air from the odor bottle to the Y-tube. Airflow through each of the Y-tube arms was set to 200 ml·min-1 (combined flow 400 ml·min-1) (Yan and Wang, 2006). All olfactory tests were undertaken in complete darkness (the olfactometer was covered with a black cloth).

One of the botanical insecticides (0.1 g) was added into one of the odor bottles. The other odor bottle was left empty and was used as control. Groups of 10 adult weevils that were starved for 3-4 h were introduced into the Y-tube via the entrance of the stem. The air pump was activated and continued to pump for 5 min. After 5 min, the number of adult weevils in each arm was recorded. Weevils that did not enter any arm were not included in the analysis. Each weevil was tested only once and then discarded. When each botanical insecticide had been tested, the olfactometer was cleaned with neutral soap and 99% acetone and dried in an oven (60°C) for at least 2 h. Six replicates were applied for each insecticide.

The two-choice test was used to determine the antifeedant activity of each botanical insecticide. The active ingredients of the botanical insecticides were  prepared  into  four  concentrations  (0.25, 0.5, 1, and 2 g·L-1) with deionized water + Tween 80 (0.5%). Sweet potato strips that had been used for the bioassay were completely immersed in one of the prepared dilutions of the botanical insecticides for 5 to 8 s as treatments or were immersed in deionized water + Tween 80 (0.5%) for 5-8 s as control. All treatments and control strips were removed and air-dried for 30 min with a fan at 24 ± 2°C. Then, one treatment strip and one control strip were transferred into both ends of a horizontal transparent plastic cylinder (60 cm in length and 18 cm in diameter). Ten adult weevils, starved for 3-4 h, were introduced into the middle of the cylinder, and the number of feeding holes on both treatment and control sweet potato strips were recorded after 24 h. Five replicates were applied for each treatment.

The no-choice test was used to determine the toxicity of each botanical insecticide. During the first round of tests, the active ingredient of the botanical insecticides was prepared into four concentrations (0.25, 0.5, 1, and 2 g·L-1) with deionized water + Tween 80 (0.5%). Sweet potato strips were treated with the same method as for the antifeedant assays. The treated sweet potato strips were transferred into treated glass bottles (12 cm in height and 12 cm in diameter). The inner wall of these glass bottles was treated with the same diluted botanical insecticides and then air-dried. Each bottle contained one sweet potato strip, and the bottles were covered with a piece of netting cloth (16 cm × 16 cm). Control sweet potato strips were transferred into control glass bottles (the inner walls of which were treated with deionized water + Tween 80 (0.5%) and air-dried). Twenty adult weevils, which were starved for 3-4 h, were introduced into each bottle. The number of dead weevils in each bottle was recorded after 24 and 72 h. Three replicates were applied for each concentration of each botanical insecticide.

The repellency rate was calculated using the following equation: 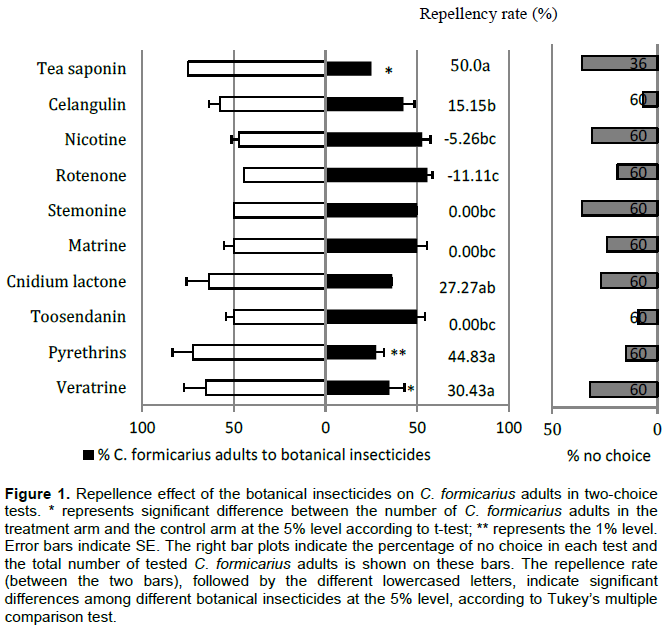 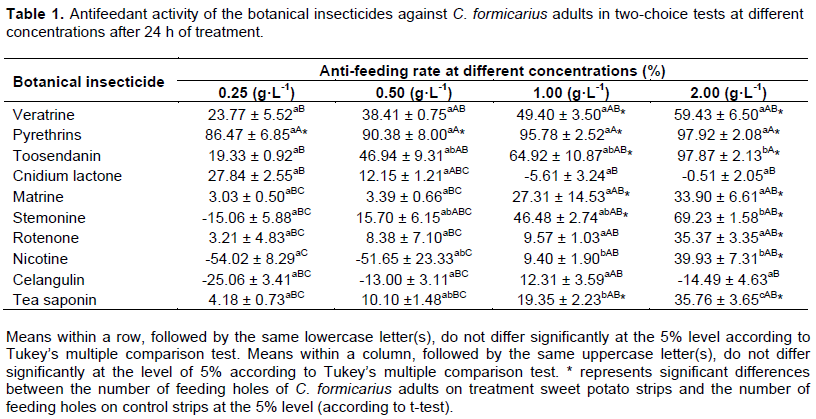 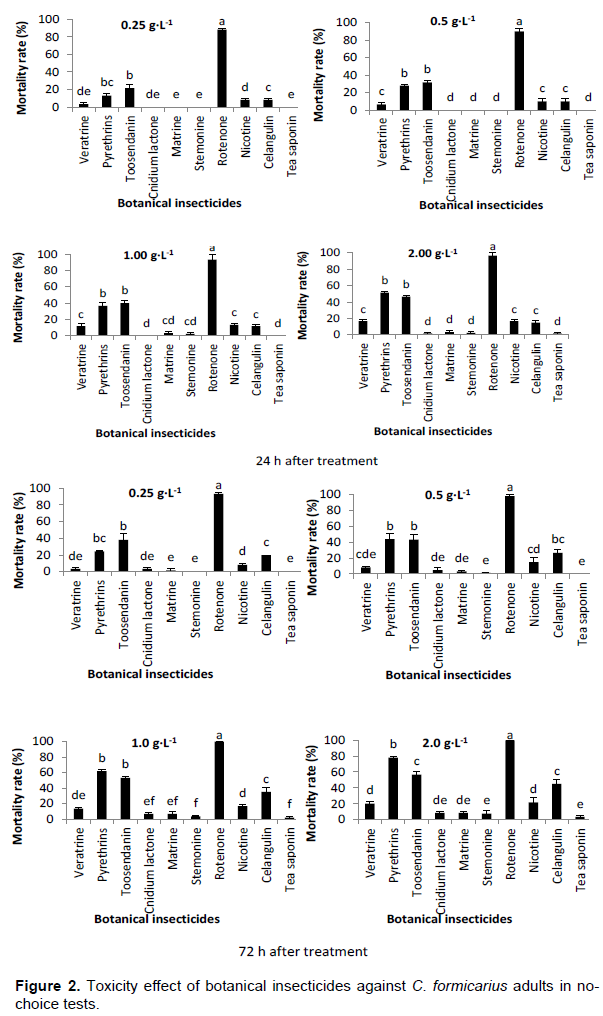 Veratrine is an activator of sodium channels in saliva, and induces vomiting (Andrews et al., 1998). The antifeedant activity of veratrine against weevils as identified by this study (antifeedant rate 59.43% at 2 g·L-1) and against Helicoverpa armigera as reported by Tian et al. (2018) may be related to its emesis-inducing property. Veratrine also showed moderate repellence activity (repellence rate of 30.43%) and weak toxicity (adjusted mortality rate of 20% at 2 g·L-1). Moreover, veratrine exhibited strong fumigation activity (the fumigation mortality of 0.1 g of the raw insecticide was 96.77% at 24 h after treatment, unpublished data), indicating good application prospect for the protection of stored roots indoors.

Stemonine (Brem et al., 2002) and matrine (Mao and Henderson, 2007) exert an antifeedant effect and have weak toxicity for weevils, but showed no repellence and fumigation effect. Celangulin did not show repellence and antifeedant effects at all. However, it exhibited a weak fumigation effect and had moderate toxicity, which is lower than that of pyrethrin and azadirachtin, and its control speed is also relatively slow  (Zhang  et al., 2011).

Several studies have investigated the insecticidal activity of tea saponin (Lin et al., 2018; Rizwan-Ul-Hao et al., 2009; Zhu et al., 2019). In  the  present study, tea saponin had the strongest repellence and moderate antifeedant activity, but its acute toxicity is insufficient to control weevil in   time.  At the same time, tea saponin is also an exploitable surfactant (Zhu et al., 2019), which can be added to   an   insecticide   formulation   to   work   as   a surfactant, repellent, and antifeedant.

The results of olfactory tests showed that tea saponin, pyrethrins, and veratrine had significant repellence effects against weevils. Antifeedant assay showed that pyrethrins and toosendanin had strong antifeedant activity. Toxicity assay showed that five botanical insecticides had high toxicity. Rotenone had the highest toxicity with the lowest LC50 values and LC90 values, followed by pyrethrins, toosendanin and nicotine. Time–mortality probit analysis showed that the LT50 value and the LT90 value of rotenone were shortest followed by nicotine.