Stored product insects reduced the quantity, quality, nutritive value and viability of stored crops such as maize, sorghum, wheat and rice. These pests and many others threaten food security. The study investigated the efficacy of Xylopia aethiopica in the control of Sitophilus oryzae on stored rice. The extracts of this plant were made using ethanol and aqueous as solvent and prepared at the concentrations of 3, 6, 8 and 0 g. Zero gram is the untreated grain that served as the control. Five pairs of male and female each of a day old adult of S. oryzae were introduced into jars containing 20 g of rice each and were observed daily for 6 weeks for mortality, oviposition, developmental stages and natality. The phytochemical analysis of the extracts revealed that alkaloids, glycosides, flavonoid and polyphenol which was moderately high and which exposes the active ingredient of the extracts. The phytochemical analysis of the extracts revealed that alkaloids, glycosides, saponins, flavonoids, reducing compounds and polyphenols were present in the extracts in moderate quantities. The proximate analysis of the grain revealed that the carbohydrate content (83.45±0.1) of Oryza sativa followed by moisture (7.33±0.1), the least nutrient of proximate analysis was seen in ash (1.00±0.00). Out of the two extraction methods employed, the ethanol extract was a more effective method and thus recommended.
Key words: Xylopia aethiopica, ethanolic and aqueous, Sitophilus oryzae, rice grain.

Cereal grains
One kilogram of dry African rice O. glaberrima was collected from Ogige market, Nsukka, Enugu State and identified. The rice was fumigated for 48 h with carbon tetra chloride and aerated for 7 days in order to kill the resident insect pest as suggested by Ivbijaro (1983). The seeds were sieved with a 2-mm sieve to remove dead insects, and the processed grains were packaged in polythene bags and kept pending use (Becky, 2004).
Sitophilus oryzae
A weevil culture of S. oryzae that developed on rice was established on March 2015. The mass production of S. oryzae took place in the Applied Entomology Laboratory, Department of Zoology and Environmental Biology, University of Nigeria, Nsukka, Enugu State, Nigeria with relative humidity and temperature of 66.6% and 28±5°C, respectively. Hundred adults of mixed sex (male and female) of S. oryzae were obtained from the weevil culture and reared in glass jar covered with muslin cloth. The food media were the rice. After two weeks, when oviposition has been noticed, the parent stocks of S. oryzae were removed by sieving the grain with a 2.00 mm sieve. The grains with the oviposited ova were left under laboratory conditions till emergence of F1 progeny. The F1 progenies from the cultures were used for the experiment (Ekeh et al., 2013).
Plant materials
The fruits of X. aethiopica were collected from Cemetery Market, Aba, Abia State and were dried to constant weight under room temperature. The dry material was ground to very fine powder and used for the experiment. The experiment was to find out the comparative efficacy of the seed extracts (Keay et al., 1964).
Aqueous extract of Xylopia aethiopica
Five hundred grams of the powdered fruits of X. aethiopica was ground and weighed into 1000-ml conical flask. 800 ml of distilled water was added to the sample in the flask. The solution was then stirred with a glass rod and allowed to soak for 24 h. The aqueous extract was filtered thrice through a plug of adsorbent cotton wool embedded in a glass funnel. The filtrate was then filtered through 11 cm round filter paper. The solution was concentrated by gentle evaporation on a heating mantle and poured into 500 ml beaker (AOAC, 2000).
Ethanolic extract of Xylopia aethiopica
Five hundred grams of the fruit was ground into fine powder and weighed using the electrical weighing balance. Five hundred milliliters of absolute ethanol was added to the sample in the flask. The solution was stirred with a glass rod, allowed to soak for 24 h, filtered using the filter paper and the filtrate allowed to evaporate under room temperature.
Phytochemistry of plant materials
Phytochemical analysis was carried out for the presence of alkaloids, saponins, flavonoids, plobatannins, cardiac glycosides, tannins and anthraquinones (Table 1). These were screened using the method described by Trease and Evans (1996). 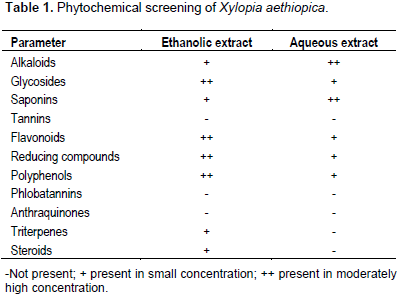 Experimental design
Split plot design of four concentrations replicated three times was used. Ethanolic and aqueous extracts of X. aethiopica was used for the experiment. Five pairs (five males and five females) of zero day old S. oryzae were introduced into each of the jars already with 20 g of rice and 8 g/6 g/3 g/0 g of X. aethiopica each. The ethanolic and aqueous extract was applied at the 8, 6 and 3 per 20 g of rice. Another control group was set up with the grain and S. oryzae but no botanical (experimental control). Each jar was covered with a muslin cloth to allow air movement and prevent insects from leaving the jar. The set up was allowed for 15 days with daily monitoring. Dead insects in each jar was collected and counted and the percentage insect mortality was calculated. When the eggs were noticed in the set-up, the pest S. oryzae was removed and eggs counted and recorded for each jar, the oviposition was monitored for 10 days for the inception of larva and pupa where developmental study was done. When the larva and pupa was noticed, the set up was monitored till natality of pests occurred and newly emerged adults of S. oryzae counted. The whole experiment lasted for a period of seven weeks (50 days) (Ekeh et al., 2013).
LD50 of Xylopia aethiopica
Fifty percent lethal dose (LD50) of X. aethiopica was done using the methods described by Don-Pedro (1989). The concentration of ethanolic and aqueous extract that killed 50% of the 20 S. oryzae exposed to it for a period of 24 h was recorded (Ousman et al., 2007).
Data analysis
One way analysis of variance (ANOVA) was carried out to compare differences in treatment means. Significant treatment means were separated using Duncan multiple range test. The efficacies of the ethanolic and aqueous extracts were also compared with Duncan multiple range tests.

Mortality
Table 4 presents univariate analysis of mortality rate on ethanol extract using analysis of variance (ANOVA). From the results shown, it was observed that the mortality of S. oryzae increased with increase in the dosage application. The highest mortality of weevil was recorded in 8 g (20.00 ± 0.58) of ethanolic extracts which was followed by 6 g (9.33 ± 0.67) and 3 g (3.33 ± 0.88). The least mortality was seen in 0 g (1.33 ± 0.33) due to the absence of the extract and it is the control group. There was no significant difference between 0 g and 3 g but there was significant difference between 6 g and 8 g. 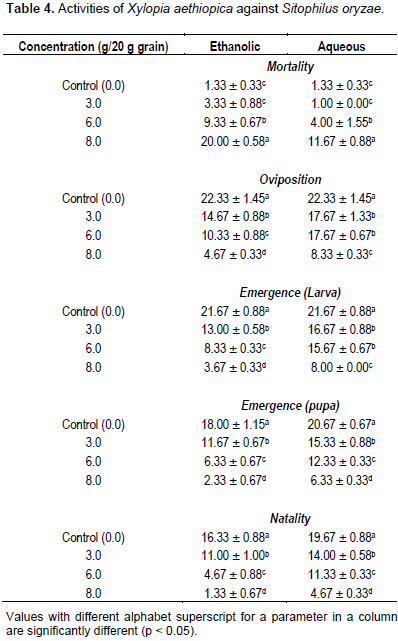 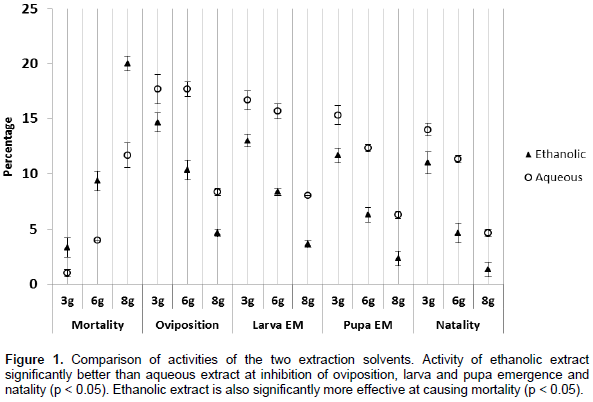 In the present study, the ethanol and aqueous extracts prepared from X. aethiopica have shown very high insecticidal properties against S. oryzae. The ethanolic and aqueous extracts of X. aethiopica at the dosage rates of 3, 6 and 8 g in rice gave promising levels of control of S. oryzae in terms of increase in mortality and reduction in oviposition, natality and developmental rates with the ethanolic extracts having high insecticidal properties than the aqueous. The present work agreed with the findings of Yankachi and Gadachi (2010) where the insecticidal actions of different plant products were compared against S. oryzae. Onolemhemhen and Oigiangbe (1991) have also reported the superiority of X. aethiopica and Piper guinensis seed in increasing mortality against S. oryzae. Onolemhemhen et al. (2011) reported that X. aethiopica has a pungent smell which functioned more as an insect repellent and perhaps caused suffocation and death of the weevils. The insecticidal features of the plant’s extract may be due to their constituent components, pungent smell and mode of actions. These may have accounted for their effective control of S. oryzae and other insects. Extracts of X. aethiopica might have exhibited some insecticidal actions resulting in low natality and oviposition of S. oryzae even though the natality and oviposition of Sitophilus oryzae were not completely halted at any of the treatment dosage rates (8 g, 6 g, 3 g), they were lower than the control treatment (0 g).
This agreed with the findings of Edelduok et al. (2015) that cotyledon powder of melon halted the ovipositon of S. zeamais which might have been due to the presence of essential oil. The mode of action of oil has been suggested by Credland (1992) to include physical barrier to respiration of insect’s eggs and young larvae. Moreover, Rajapaske (2006) suggested that the mechanical effects of the large quantities of powders could have effects on oviposition. Lubijar (1983), who embarked on another botanical study of the neem seed Azadirachta indica found out that the neem seed severely reduced egg laying in female S. oryzae while increasing the mortality (Ekeh et al., 2013). Treatment with X. aethiopica increased larval and pupal period and reduced the total oviposition period, adult longevity and fecundity suggesting that the phytochemicals in the X. aethiopica interfere with the neuroendocrine system in insects, which controls the synthesis of ecdysone and juvenile hormone. In the present investigation, it was found that X. aethiopica affords better protection against S. oryzae.
It was observed that the ethanolic extract was more effective in checking mortality, natality, developmental rate and oviposition than the aqueous extracts. X. aethiopica has many other activities against insects disrupting or inhibiting development of eggs, larvae, pupae, delaying the molting of larvae, disrupting mating and sexual communication, repelling larvae and adults, poisoning larvae and adults, feeding deterrent and preventing adult to maturation. This is in agreement with the work of Radha and Susheela (2014) who reported that the use of different botanicals severely reduced the oviposition, developmental rates and natality of Callosobruchus maculatus. The findings of this work indicated that the ethanol extract of X. aethiopica could be used in controlling rice weevil in stored rice. This will reduce chemical pesticide usage, remove the risk of toxic residues in food and ensure the continued availability of insect free rice for food, planting, trading and storage (Ngamo et al., 2007).

The present work has revealed the efficacy of X. aethiopica on rice weevil (S. oryzae), established the concentration that controls the weevils on rice grain at different quantities and has also looked at different extraction methods of the X. aethiopica. The effects of X. aethiopica in protecting the grain against S. oryzae were comparable to using standard pesticides. It has been confirmed that ethanolic extraction stands out as the best extraction methods because it exposes the active ingredients of the extract making it more efficacious as having the potentials in the control of insect pests and thus recommended as a biopesticide.

Immense gratitude goes to the Head, Department of Zoology and Environmental Biology, Prof. P. O. Ubachukwu for approving the laboratory space and all the technical staff of Department for this work.