Livestock herdersâ€™ perception on the causes and effects of Senna obtusifolia L. invasion in rangelands of Northern Ethiopia

Livestock herders’ perception on the invasion and effects of Senna obtusifolia L. were gotten from two locations (Kafta Humera and Tsegede) in Northern Ethiopia. From each location, three peasant associations were selected using key formants and group discussion. The invasion level of S. obtusifolia L. was higher near settlements and road side of continuously grazed lands of the study area. S. obtusifolia L. invasion is negatively affecting the grazing lands of the study area. Highly palatable grasses and herbaceous legume species were identified to be increasingly rarer from S. obtusifolia L invade grazing lands. Although unpalatable, herbaceous species was increased in invaded sites in the study area. The replacement of highly palatable grasses and legume species by less palatable and unpalatable herbaceous species in S. obtusifolia L infested grazing lands. This resulted in the shortage of quality and quantity forage for grazing animals near settlements leading to long distance travelling to search for animal feed, and subsequently with the reduction of livestock productivity. Although, S. obtusifolia invasion negatively affect the herbaceous vegetation and livestock productivity with no measure taken into place to control its invasion. Therefore, the collaboration of all stakeholders is needed to optimize the negative impacts of S. obtusifolia  invasion.
Key words: Grazing lands, group discussion, invasive species, key informants, palatable herbaceous species.

Plant invasion presents a serious threat to biodiversity management and conservation in many parts of the world (Grice, 2006). Invasive plant species that are hazards have shown detrimental environmental and socio economic impacts in East African dry lands (Obiri, 2011).
Invasive species remain one of the  most  understudied in developing countries (Pysek et al., 2008). In semi-arid rangelands, based on their impact and effect on grazing areas and natural pastures, invasive species cause massive losses in livestock production. Consequently, animal production in arid and semi-arid regions are faced with the problem of animal feed supply due to shortage of the growth of herbaceous species and biomass yield in rangelands (Boufennara et al., 2012).
Non-native invasive species can directly affect native communities by altering species richness, evenness, or diversity in recipient communities (Wardle et al., 2011). Non-native invasive plant species are well known threats to native ecosystems (Mack et al., 2000). Previous studies (Tessema et al., 2011; Solomon et al., 2007) reported that the excessive plant defoliation of rangelands by grazing damages plant tissues, and the compaction reduces plant species diversity and the percentage cover of the herbaceous vegetation which resulted in the disappearance of perennial grass species.
Subsequently, unpalatable and grazing tolerant annual species became dominant in heavily grazed patches and increase in the population of other non-woody, less palatable, unpalatable and poisonous plant species (Solomon et al., 2007). Senna obtusifolia L. is an aggressive invader of pasture and can completely dominate grass species, eradicating pasture growth and excluding stock. Carrying capacities can be reduced by as much as 85% (Mackey et al., 1997).
Rangeland degradation was identified as a serious problem in lowlands of western Tigray which resulted from the expansion of cultivation, continuous heavy grazing due to the high livestock pressure in a very limited area and population pressure due to re-settlement schemes (Solomon, 2015).
Expansion of legal and illegal cultivation and grazing practices, locally dubbed 'woferzemet' was also increased from time to time as reported by Lemenih et al. (2014). These factors have resulted in the reduction of coverage in grazing lands available for communal grazing by livestock. In addition to its reduction in size, the grazing lands are poorly managed consequently, herbaceous invaders such as Sennaobtusifolia, Acanthospermumhispidum and Xanthium abyssinicum started to increase (Solomon and Yayneshet, 2014; Solomon, 2015).
Teame et al. (2014) also reported that invasive herbaceous species of S. obtusifolia L. invaded the lower altitude near the settlement and road sides in grazing areas of Tigray Region, Northern Ethiopia. Community perception plays an important role in natural resource management. Since herders are in close contact with their environment and livestock, they have rich knowledge about their environment, livestock and resource (Tafesse and Kassaye, 2004).
Through herding, they understood the ecological process and the relationship with the environment. However, there is no evidence regarding the livestock herders’ perception on the causes and effects of S. obtusifolia L. invasion in rangelands of Northern Ethiopia. Therefore, the study was conducted with the objective of investigating livestock herders’ perception on the causes and effects of S. obtusifolia L. invasion in rangelands of Western Zone Tigray Region, Northern Ethiopia.

Description of the study area
The study was conducted in Western Zone of Tigray, Northern Ethiopia. The geographical location of the study area is 13°42′ to 14°28′ north latitude and 36°23′ to 37°31′ east longitude (Mekonnen et al., 2011) sharing borders with Tahtay Adibayo Woreda, Sudan, Amhara region and Eritrea in the East, West, South and North respectively (Figure 1).

The altitude of the study area ranges from 500 to 3000 masl and consists of three agro-ecological zones (lowland, midland and highland) in which kola (lowland) represents 75%, weynadegga (midland) account for 15.7% and dega (highland) account for 9.3% of the land coverage of the zone. The zone receives annual rainfall which ranges from 600 to 1800 mm with maximum and minimum temperatures of 45°C and 12°C, respectively (ZOIC, 2015).
The study area, western Tigray covers a total area of 1.5 million hectares. The current coverage of grazing lands comprises of 116921.9 hectares (7.79%) from the total land cover. The total livestock population of the zone account for 767527, 87339, 579847, 1190, 1059, 62564, 8104, 811677 and 27451 for Cattle, Sheep, Goats, Horses, Mules, Donkeys, Camels, Poultry and Beehives, respectively (CSA, 2015).
The major livestock feed resources in the study area are natural pasture, crop residues, woody browses (shrubs, bush and tree) and other simple feed such as stubble, hay and tree foliages in which the majority of the feed resource are covered by natural pasture, and followed by crop residues (Gebrehaweria, 2011).
Selection of sampling sites
Purposive sampling procedure was followed to select two locations in the study area, Kafta Humera and Tsegede districts on the incidence of invasiveness of S. obtusifolia L. and three peasant associations (PAs) from each district of Baeker, Tirkan and Ruwasa from Kafta Humera, and Dedebit, Lekatit and Werie from Tsegede were selected purposively again based on the infestation of the invading species. According to ILCA (1990), field observation was followed by reconnaissance field trips with key informants prior to the group discussion throughout the study area with the purpose of assessing a general overview of the nature and distribution of invading species, and to evaluate herbaceous species structure at flowering stage of almost all herbaceous species.
Data collection
Prior to the group discussion, field observation was followed by reconnaissance field trips with 5 key informants from each sampling site (PAs). A total of 30 key informants (2 locations * 5 key informants * 3 PAs) were used in order to extract background information on the invasion status and effects of the invading species on the grazing lands. Following the field observation, group discussions were held with a total of 72 livestock herders (2 locations * 12Livestock herders * 3 PAs) to extract background information about their grazing lands in both locations and 3 PAs separately. For the group discussion, relevant questions were prepared in relation to the causes and effects of S. obtusifolia L. invasion. The livestock herders were selected by the development agents purposively depending on their experience in herding and rearing livestock.
Data analysis
Ranking analysis: Livestock herders’ group discussion data  related to militating factors for invasion and main effects of S. obtusifolia L. invasion on their grazing lands and livestock productivity were analyzed using ranking index method (Musa et al., 2006).The index was computed as:

Livestock herder’s perception on the invasion of S. obtusifolia L.
In both study locations, the entire key informants and  the focus group agreed that the degree of S. obtusifolia L. invasion was seen near the settlements and road side of the study area due to frequent allocation and overgrazing of their livestock. This was similar to the finding of Teame et al. (2014) who reported that S. obtusifolia L. invaded the lower altitude near the settlement of continuously grazed patches of Western Tigray Region, Northern Ethiopia. Both key informants and participants of the discussions also indicated that the reason (causing factors) for the accelerated invasion of S. obtusifolia L. were encroachment of extensive  cultivation,  illegal  cultivation and grazing practices (locally called 'woferzemet'), continuous grazing in limited areas, reduction of grazing, poor management of grazing lands, road construction and resettlements in rangelands of the study area which leads to continuous overgrazing in limited area of grazing lands.
Subsequently, unpalatable and grazing tolerant annual species became dominant in heavily grazed patches. This finding agrees with the reports of Tessema et al. (2011) and Solomon (2015) who indicated the dominance of unpalatable species in heavily grazed areas. The livestock herders perceived that encroachment of extensive cultivation was ranked as the first cause of S. obtusifolia L, followed by illegal cultivation and grazing practices (locally called 'woferzemet'), continuous overgrazing in limited areas, reduction of grazing lands and poor management of grazing lands in size ranked from second up to fifth, respectively. Road construction and resettlements programs were ranked last (Table 1). 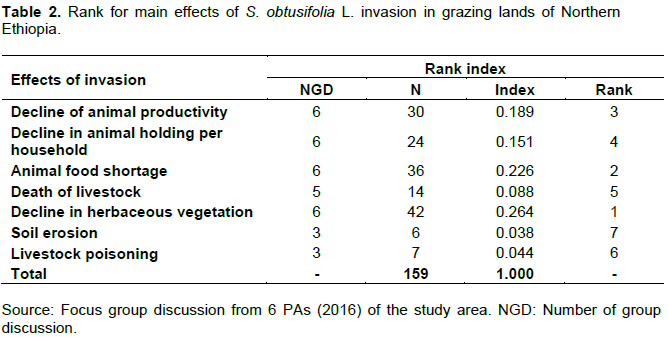 According to the personal and key informant’s field observation, S. obtusifolia L. has been able to germinate early in the beginning of wet season and attain maturity early in the mid wet season before the native herbaceous species (Figure 2). Its early germination and maturation was able to take an advantage to form dense cover over the native    herbaceous species. Consequently, it suppresses the growth of palatable native herbaceous vegetation (Figure 2). 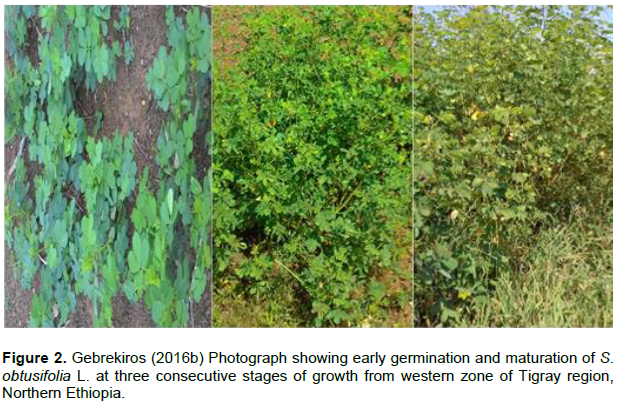 This finding is in line with previous study of Dorning and Cipollini (2006) who noted that invading species negatively affects native species in reducing germination, growth, survival and reproduction. Awodoyin and Ogunyemi (2008) confirmed that S. obtusifolia L. has the ability to grow fast and forms a close basal cover, which was able to recycle nutrients from the subsoil and suppress the growth of other herbaceous species.
Therefore, the dominance of S. obtusifolia in these grazing areas reduced the performance and seed production of the palatable native herbaceous vegetation’s which are essential for the grazing animals, thereby promoting the invading species to increase its seed contribution to the soil seed banks and consequently, observed with increase in its infestation in the grazing lands in time and space (Figure 2).
However, no action was taken yet by the Woreda zonal level and kebelle level in Kafta Humera to control its invasion. Unlike Kafta Humera, farmers in Tsegede tried to reduce the impact of S. obtusifolia L. by hand weeding at its early stage and mowing at the flowering stage. But it was not practiced in organized manner at the kebelle level. The livestock herders in Tsegede perceived that hand weeding at its early stage of the invading species is an effective measure of controlling even though it is tedious to control vast areas, and also they indicate that the invasive species emerge (germinate) once per a production season. But mowing at the mid stage of the invading species had an adverse effect on animal and human being foot injuring due to its hard stem after mowing.
The key informants agreed that the invading species has more adverse effects to the environment and economy of the study area by monopolizing the grazing lands. As  a  result,  they  perceived  that it  needs  urgent interventions involving all stakeholders (Governmental institutions, Local None Governmental institutions, Local Community and others) to control the spread of the species, which is currently at an unprecedented rate spread. Community and others) to control the spread of the species, which is currently at an unprecedented rate.