Potato is an important food security and cash crop in Kenya (Kaguongo et al., 2013). However, scarcity of quality seed is a perennial problem and a major hindrance to improvement of potato production in the country (MoA, 2009; MoALF, 2016). To boost production of seed, various strategies have been put in place including introduction of a mini-tubers production step during the early stages of commercial seed multiplication. Mini-tubers have the combined advantages of in vitro plantlets (disease-free, rapid and year-round production) and tubers (easy storage and transport) and lack some of the disadvantages of in vitro tubers (low multiplication rate, small size and poor recovery from environmental stresses). The mini-tubers production phase should ideally generate a large number of mini-tubers so as to contribute not only to quicker bulking of seed and reduced exposure to diseases but also to reduce seed costs. Methods of mini-tubers production include, high density cultures with non-destructive harvests (Lommen and Struik, 1992), hydroponic systems using different inert substrates, deep water culture systems (Chang et al., 2000; Lommen, 2007), the Nutrient Film Technique (NFT) system (Wheeler et al., 1990; Medeiros et al., 2002) and hydroponic systems with recirculating nutrient solutions in low volume substrates (Struik and Wiersema, 1999).
Mini-tubers can also be produced in greenhouses in beds (Wiersema et al., 1987; Tierno et al., 2014) or in containers using different substrate mixtures (Struik and Wiersema, 1999). Conventional substrate-based methods for pre-basic mini-tuber seed production usually have low productivity with a low average multiplication rates depending on the type of mother plant used and type of production system which contributes to increasing the production costs of a seed potato production program. Substrate based methods also have the inherent risk of infection from soil borne diseases and require sterilization which can be costly. The NFT system can suffer from deficient O2 concentrations due to consumption by roots and microorganisms (Gislerod and Kempton, 1983), while deep-water culture systems can be prone to inadequate aeration to the root system (Jackson, 1980; Lommen, 2007). To improve the efficiency of mini-tubers production newer technologies such as aeroponics have been introduced and are currently being promoted as one of the solutions for rapid and efficient production of mini-tubers (Otazu, 2010; Lung’aho et al., 2010; Muthoni et al., 2011; and Mbiyu et al., 2013). The advantages of aeroponics include optimization of root aeration resulting in a high yield of mini-tubers as compared to hydroponics (Soffer and Burger, 1988); limited water use, nutrient recirculation, and good monitoring of nutrients and pH (Otazu, 2010).
Multiplication rates in aeroponics systems are reported to be significantly higher than those obtained in conventional systems (Ritter et al., 2001; Farran and Mingo-Castel, 2006; Teirno et al., 2014). The technology has the potential of reducing at least one generation of seed multiplication in the field, with lower costs and maintains high phytosanitary quality (Nichols, 2005). Production of mini-tubers can be increased and production costs lowered using aeroponics (Scherwinski-Pereira et al., 2009). Aeroponic systems have also been reported to have high production efficiency per unit area (> 900 mini-tubers m-2) (Mateus-Rodriguez et al., 2013); (1268 to 1396 mini-tubers s m-2) (Rykaczewska, 2016). Despite the many advantages of the technology, there is little information on the comparative performance of different varieties under aeroponics production systems in Kenya. This study was therefore, undertaken with the objective of evaluating the performance of growth and production of mini-tubers of five varieties commonly grown in Kenya under an aeroponic production system.

Study period and location of the experiments
This study was carried out during two growing seasons (season one: March to September, 2012 and season two: October, 2012 to April, 2013) at Kenya Agricultural Research Institute - Tigoni (KARI-Tigoni), located 10°8’S and 36°40’E, at an altitude of 2100 m, 4 km South East of Limuru town in Kiambu County of Kenya.
Preparation of planting materials
In vitro plantlets of 5 varieties (Tigoni, Asante, Dutch Robijn, Desiree and Kenya Mpya) differing in vegetative and reproductive characteristics were used for the experiments (Table 1). The plantlets had been previously initiated through meristem and shoot tip culture from plants that had been certified as disease free. The plantlets were then routinely sub-cultured every 3 to 4 weeks on normal propagation media with agar as the gelling agent (Espinoza et al., 1992) in Kilner jars using nodal cuttings in order to attain sufficient quantities for the experiments. The cultures were then incubated for 3 weeks in a growth room with temperatures of 22 ± 2°C, a 16-h photoperiod and a light intensity of 3,000 lux provided by Philips T12 ‘cool white’ fluorescent tubes. The plantlets were then transplanted to crates containing sand under screen house conditions and regularly fertigated with ½ strength aeroponic nutrient solution (Table 2). When the plantlets were 14 days old, they were carefully transplanted into the aeroponics unit. At this time, the plantlets were approximately 10-15 cm tall with a root length of about 2.5 to 5.0 cm. 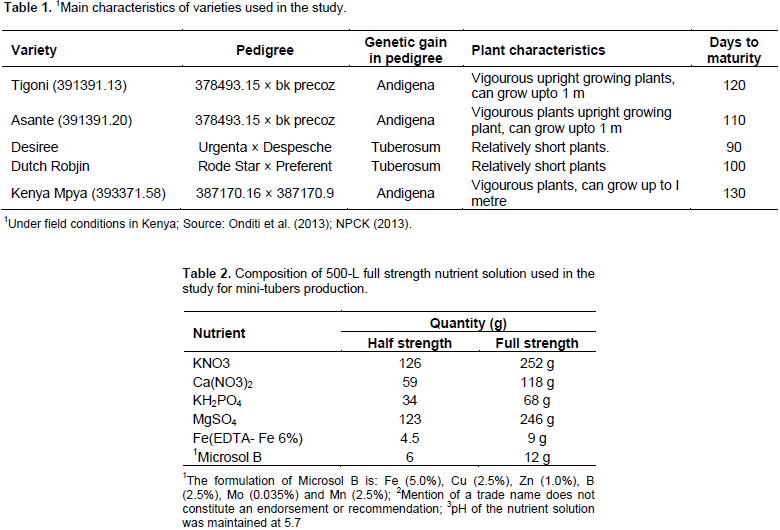 Description of the aeroponics system
The design of the aeroponic system was as described by Otazu (2010) but with some modifications. The aeroponic system consisted of an insect proof screen house measuring 9.4 m x 8.4 m and covered with clear sheets and a shade net on stop of the roof to lower the temperatures. The aeroponic boxes measured 6.4 m length x 1.5 m width x 0.95 m depth. The boxes were insulated with styrofoam to prevent developing roots from being affected by temperature variations in the screen house. The boxes had side windows to permit harvesting of mini-tubers and monitoring of the growth of plants and the proper functioning of nebulizers. The inside of the boxes was lined with black plastic to prevent exposure of the root system of the plant to light. The internal bottom (floor) of the boxes was also lined with thick plastic (1 mm) to avoid leakage of nutrients. The external top lining was white plastic, so as to minimize accumulation of heat and also permit greater illumination of the growing plants. The internal lining of the top covers of the boxes was also lined with thin plastic cover. A similar thin black plastic was used to cover the windows of the boxes as double curtains. The internal curtain prevented nebulized nutrient solution from escaping from the boxes, while the external curtain prevented the entry of light into the boxes.
The boxes were slanted towards the nutrient tank to allow excess nutrients to return back into the tank by gravity. To facilitate this, the nutrient tank was installed below ground level so that the lower part of each box was above the upper portion of the tanks. The fertigation system consisted of an underground plastic tank (1000 L) in which the nutrient solution was stored/held for circulation though the closed system. The nutrient solution (Table 1) was pumped into growth chambers (boxes) using a system of pipes and nebulizers. The nebulizers in the boxes were spaced every 60 cm. The fertigation system was controlled by a timer and mists of nutrient solution were sprayed onto the growing roots for 5 min after every 15 min during the day and 5 min after every 45 min at night throughout the experiment This system was powered by electricity, but a generator was used in case of electricity failure. Measurements and corrections of the pH and electrical conductivity (EC) for the nutrient solution were done weekly. The pH was maintained in a range of 5.5 to 6.5 and the EC between 1.5 and 2.0 d Sm-1. Fresh nutrient solution was prepared every month.
The lids of the growth chambers/boxes had small holes (25 mm diameter) through which a plastic pipe (25 mm in dimeter and 70 mm in length) was inserted such that it was flush with the lid of the growth chambers. The plantlets were then placed in the pipes (one plant in each pipe) with the roots hanging inside the box such that nutrients would reach the roots when applied. The upper part of the plantlet (approximately 3-8 cm) was left protruding above the pipe to ensure that the plant was able to photosynthesize. The plantlets were held firmly in an upright position using masking tape. The masking tape also served as a light blocker as it was used to cover each hole thus preventing light from penetrating into the box. The lowest leaf of the plant was cut off every 2 weeks for the next 2 months. This allowed the plants to be pushed deeper down into the growth chamber (equivalent to hilling in conventional potato production) to promote stolon development, this was done once a week for only 4 weeks after transplanting. As the plants grew, they were trained using a nylon trellises and tied with nylon for support.
Experimental design and data collection
The experiment was set up as a randomized complete block design (RCBD) replicated 3 times. Transplants of each of the 5 varieties were placed in an aeroponic box at 17 x 18 cm resulting in a plant density of 32 plants m-2. Each box represented an experimental unit. Data on plant height was taken starting at 30 days after transplanting (DATP) into the aeroponic unit and thereafter at 10-day intervals until the earliest maturing variety started to senesce. A total of 6 measurements were made. Tubers were harvested sequentially starting at 40 days after transplanting, depending on the variety and thereafter every 10 days. The harvest criterion was to remove all tubers which were larger than 15 mm in diameter except during the final harvest when all tubers were removed from the plant regardless of size. During each harvest, the mini-tubers were graded into three sizes: size I (≤5 g), size II (5.1-12 g), and size III (12.1-20 g). The number of tubers in each size group and their weights was then recorded. The average number of mini-tubers s per harvest was computed by dividing the total number of mini-tubers harvested by the number of harvests per variety in a season. Plant vigor was recorded at 60 DATP on a five point scale where, a score of 1 signified a variety least vigorous, 3 signified a variety vigorous and 5 signified a variety very vigorous. Plants were considered to have senesced when 90% of the leaves turned yellow. Standard practices for control of diseases and pests were carried out during the experiment.
Data analysis
Data for each season was analyzed separately. Differences between varieties were determined by analysis of variance (ANOVA) procedures for a randomized complete block design experiment using GenStat 12th edition statistical software (GenStat, 2009) at p≤0.05. When F values were significant, treatment means were compared using Fischer’s protected least significant differences (LSD) test at p≤0.05. The relationship between mini-tubers yield variables was determined using correlation analysis.

Plant height and vigor
The effect of variety on plant height was significant for all plant heights measured between 30 and 80 DATP in both seasons (Figure 1). At 80 DATP, varieties Tigoni and Asante were significantly taller than the other varieties during both seasons. During the same period, variety Tigoni was almost twice as tall as variety Desiree. Plants tended to be taller in season 2 than in season 1. The difference in plant height between the tallest and the shortest variety became more pronounced with time. For example at 30 DATP, the difference was 6 cm in season 1 and 10.1 in season 2. However, at 70 DATP, the difference was 37 cm in season 1 and 43 cm in season 2. During both seasons, the varieties Tigoni, Asante and Kenya Mpya were rated as very vigorous with high amounts of plant foliage whereas Dutch Robjin and Desiree were rated as vigorous with moderate amounts of foliage. 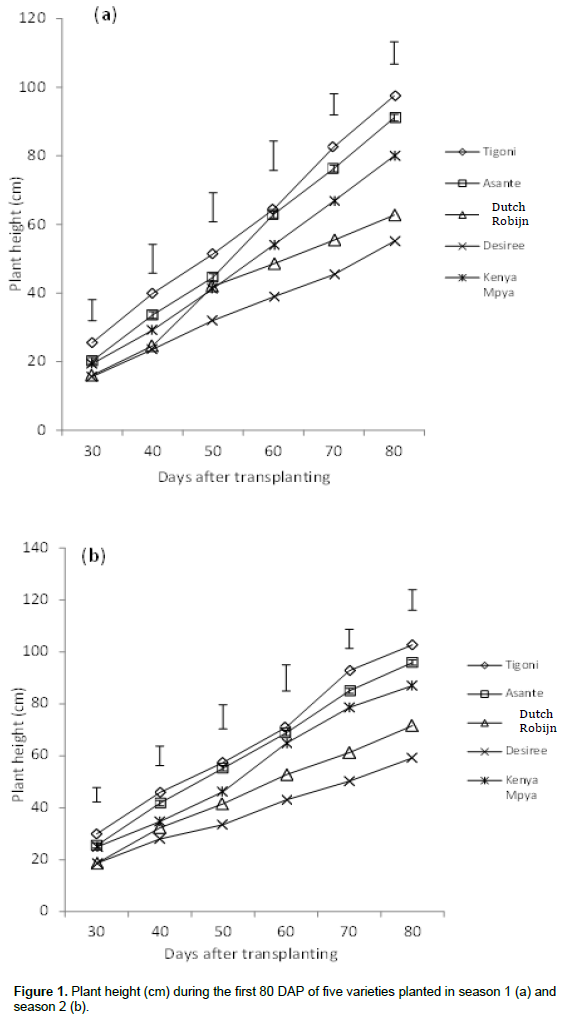 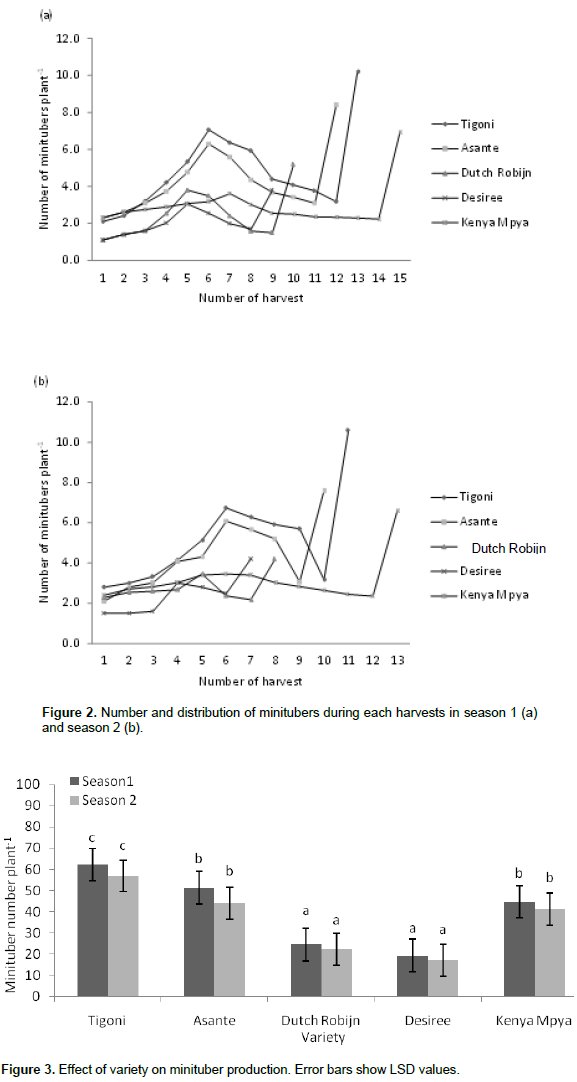 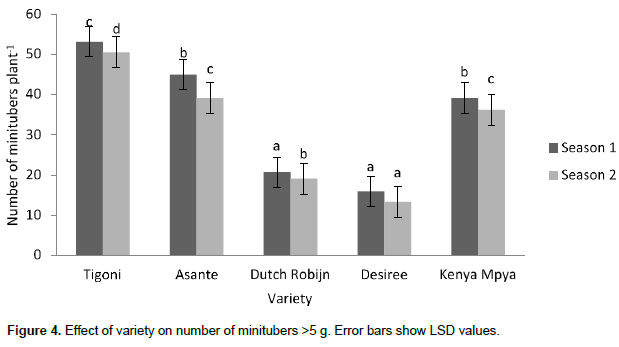 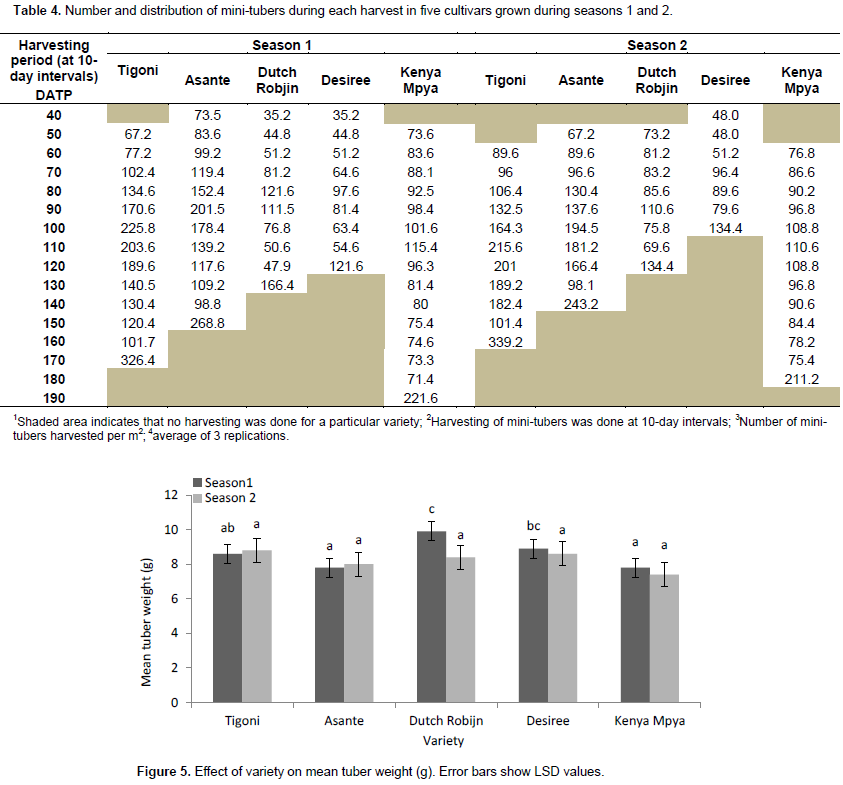 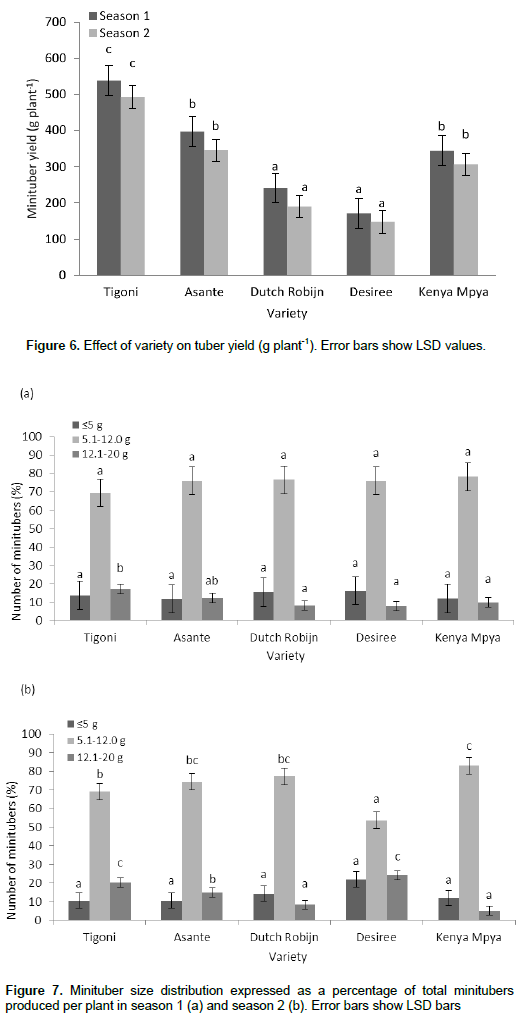