Twelve white common bean genotypes were evaluated along two checks at three diverse locations in the mid-altitude of Bale zone, southeastern Ethiopia for two consecutive years 2014 and 2015 in order to determine their stability. The genotype by environment interaction (GEI) has an influence on the selection and recommendation of cultivars. The objective of this work was to see the effect of GEI and evaluate the adaptability and stability of productivity of twelve white common bean genotypes using additive main effect and multiplicative interaction (AMMI) model.  The combined analysis of variance over locations revealed highly significant differences among the genotypes, locations and genotypes by location interaction. Among the 14 genotypes, the maximum grain yield over locations was obtained by genotype (G5) ICN Bunsi X S X B 405/5C-1C-1C-51 (2.05t/ha) followed by (G11) ICN Bunsi X S X B 405/7C-1C-1C-30 (1.96t/ha), and the site that gave the maximum grain yield was Ginir (2.16t/ha). The results of AMMI analysis indicated that the first four AMMI (AMMI-AMMI4) were highly significant (P<0.01). The GEI - was two times higher than that of the genotype effect, suggesting the possible existence of different environment groups. Based on the stability parameters like AMMI stability value (ASV), G12, G5, G7, G11, G3 and G13 were found to be as stable cultivars, respectively. As stability per se is not a desirable selection criterion and the most stable genotypes would not necessarily give the best yield performance, simultaneous consideration of grain yield and ASV in a single non-parametric index were also considered in identification of best varieties. Based on the Genotype Selection Index (GSI), which considers both the ASV and mean grain yield, genotype G5 and G11 were identified as stable genotypes for the study areas.

Common bean (P. vulgaris L.) germplasm was introduced into Africa from each of the two gene pools in Latin America during the past four centuries (Allen, 1995). Africa is now the second most important common bean producing region in the tropics, following Latin America (Allen, 1995). Beans are now recognized as the second most important source of human dietary protein, and the third most important source of calories of all agricultural commodities produced in Eastern and Southern Africa (Pachico, 1993). Bean is a major crop in many parts of Africa, especially in eastern Africa. An important food to people of all income categories, it is especially important to the poor as a source of dietary protein. Its production is agronomically diverse, being grown in many different crop associations. Bean is grown primarily by small-scale farmers in eastern Africa. Unfortunately, the rate of increase in bean production has been exceeded by the rate of population growth. The Association for Strengthening Agricultural Research in Eastern and Central Africa (ASARECA) recognizes research on beans as being of high importance. Bean is an important source of cash for small scale farmers in Africa, whether as part of the total farm income or for providing a marketable product at critical times when farmers have nothing else to sell such as before the maize crop is harvested (Pachico, 1993).
Common bean is a well-established component of Ethiopian agriculture, and is regarded as the main cash crop and protein source of the farmers in many lowland and mid-altitude regions of Ethiopia with an estimated production area of 239,000 ha (Wortmann and Allen, 1994). The national average yield is 500 to 700 kg/ha and yield from research station plots is in the range of 2000 to 3000 kg/ha (Mekbib, 1997). The most suitable bean production areas in Ethiopia are characterized by an altitude range of 1200 to 2200 m asl, and mean maximum temperature of less than 32°C, and well distributed rainfall of 350 to 500 mm throughout the growing season. Genotype-environment interactions are of major importance to the plant breeder in developing improved cultivars (Kang, 1993). When cultivars are compared over a series of environments, the rankings usually differ and this may cause difficulty in demonstrating the superiority of any cultivar across environments. Since production is highly affected by the effect of environment, identifying stable cultivar for maximum yield is essential. A major challenge for plant breeders is determining the appropriate common bean genotypes due to genotype x environment (GE) interactions, which determine the differential response of genotypes among environments. To reduce the effects of GE interactions, it is convenient to know their magnitude, and to identify more stable genotypes adapted to specific environments (Cruz and Regazzi, 2007).
In this context, several methods to study adaptability and stability have been used to measure GE interactions in common bean (Coimbra et al., 1999; Carbonell et al., 2004; Ribeiro et al., 2009; Pereira et al., 2009, 2011; Torga et al., 2013), predominantly based on linear regression models (Eberhart and Russell, 1966) and multivariate analyses, such as additive main effects and multiplicative interaction analysis (AMMI) (Gauch, 2006). Traditional methods that predict genotype performances in multiple environments are based on a classic approach to statistics, which estimates one or more parameters from a set of observations. Although there are many stability parameters, Eberhart and Russel (1996) model’s parameters S2di appeared to be very important. Since the variance of S2di is a function of a number of environments, hence several environments with minimum replications per environmental factor being advocated to be necessary to obtain reliable estimates of S2di. To identify the stable genotypes having adaptability over a wide range of agro-climatic conditions is of major significance in crop improvement. Therefore, this study aimed to observe the effect of GEI and to evaluate the adaptability and stability of twelve white common bean genotypes using Additive main effect and multiplicative interaction (AMMI) model.

is the weight given to the IPCA1 value by dividing the IPCA1 sum squares by the IPCA2 sum of squares.
Genotype selection index (GSI) was also calculated by the formula suggested by Farshadfar et al. (2003). Here it is calculated by taking the rank of mean grain yield of genotypes (RYi) across environments and rank of AMMI stability value (RASVi) (Table 1). 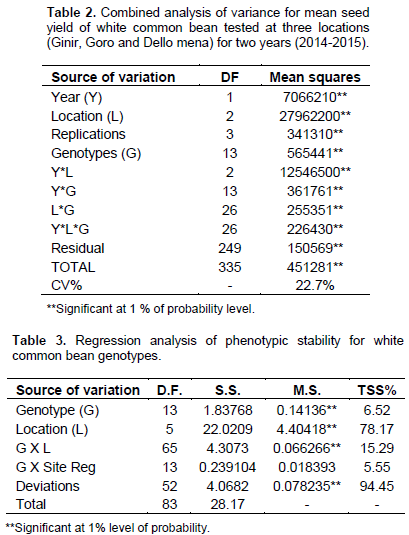 The result of AMMI analysis indicated that 6.52% of the total variability was justified by genotypes, 78.17% by environment and 15.29% by genotype. The partitioning of total sum of squares indicated that the environment effect was a predominant source of variation followed by GE and genotype effect. A large sum of square (SS) for environments indicated that the environments were diverse, with large differences among environmental means causing most of the variation in grain yield.  The GE interaction effect was two times higher than that of the genotype effect, suggesting that there were sustainable differences in genotypic response across environments. Furthermore, the AMMI analysis revealed that there were high significant differences for IPCA1, IPCA2, IPCA3 and IPCA4. This made it possible to construct the biplot and calculate genotypes and environment effects (Guach and Zobel, 1996; Yan and Hunt, 2001; Kaya et al., 2002). The first IPCA1 accounted for 35.74% of the variability of GE, followed by IPCA2 (35.43%), IPCA3 (20.63%) and IPCA4 (4.7%).
The first two interaction principal component axes (IPCA) scores were cumulatively accounted for 71.2% of the total GE interaction. This indicates that the use of AMMI model fit the data well and justifies the use of AMMI2 (Table 4). The IPCA scores of a genotype in the AMMI analysis indicate the stability of a genotype across environment. The closer the IPCA scores to zero, the more the stable the genotypes across their testing environments. Table 5 shows effects of genotypes and site values from the additive genotype x environment model. The large differences of effects both on genotypes and on environments were observed. Environments A (0.69t/ha) and C (0.21) have the main high significant positive grain yield effects. Environments E (-0.22t/ha) have the main significant negative grain yield effects. Genotypes G5 (0.34t/ha) and G11 (0.26 t/ha) had a positive grain yield significant effect across all environments. The majority of white common bean varieties had a small none significant main positive effect. Table 6 indicates the different stability parameters that can determine the stability of a given genotype across the tested environment. Accordingly, the regression coefficient (bi), mean grain yield and deviation from regression should be simultaneously seen before deciding on the stability of a genotype. 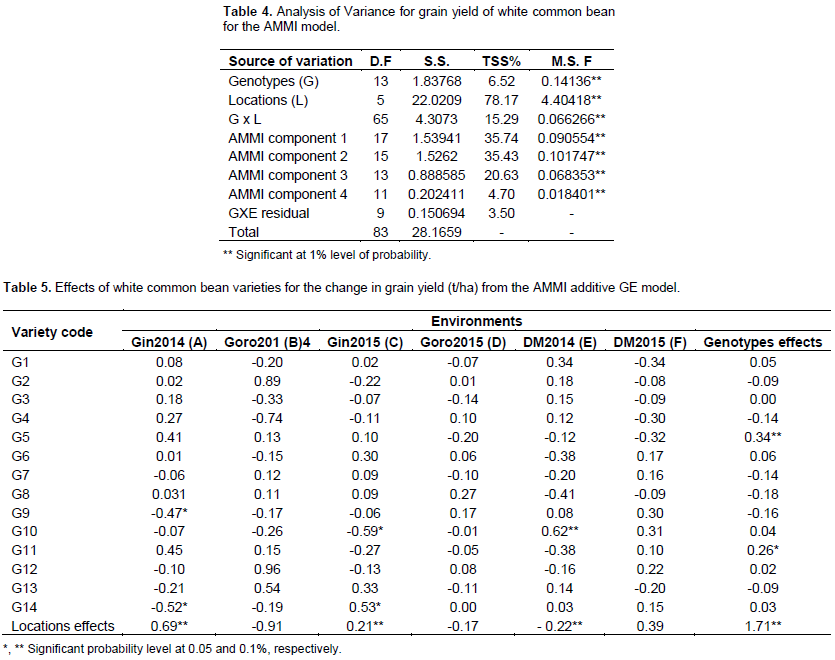 Furthermore, the ASV which is the distance from the coordinate point to the origin in a two-dimensional scatter gram of IPCA1 scores against IPCA2 score should also be seen to decide the stability of a genotype (Purchase et al., 2000). In ASV method, the genotype with least ASV score is the most stable. From this study (Table 6), AMMI Stability Value (ASV) distinguished genotypes G12, G5, G7, G13 and G3 as the stable genotypes. However, since the stability in itself should not be the only parameter for selection, as the most stable genotype wouldn’t necessarily give the best yield performance (Mohammadi et al., 2007). Hence, simultaneous consideration of grain yield and ASV in single non-parametric index is needed. Therefore, based on the GSI, G5 and G11 were considered as the most stable genotypes with high grain yield compared to the others (Table 6). The last stage of the AMMI analysis is the graphical representation of genotypes and environment in the biplot (Gabriel, 1971), and identification of mega-environment. The biplot graphics were used to analyze the description of genotypes, environments and the interaction between them. The first singular axis of the AMMI analysis captures the highest percentage of the “pattern” of the data (Gauch and Zobel, 1988).
A high percentage of the Sum Square of the GE interaction (SSGEI) is explained by the first two axes (71.2%) and the highest part of the “pattern” of the GEI will be captured. According to the values of the two first principal components (IPCA1 and IPCA2, Figure 1), G5, G11, G6, G1 and G10 are the genotypes with more productivity in the environmental conditions prevailing during crop development. But G10, interact negatively to most of the environments, though it gives high grain yield above the grand mean. Regarding stability, G5, G11, G12, G13 and G7 are considered as the stable genotypes. However, when we see their GSI (Genotype Selection Index) which associate both the ASV and the grain yield, G5 and G11 are the more stable genotypes with high grain yield across the testing sites. G10 is more specifically adapted to environment E and G9 to environment F (Figure 1). 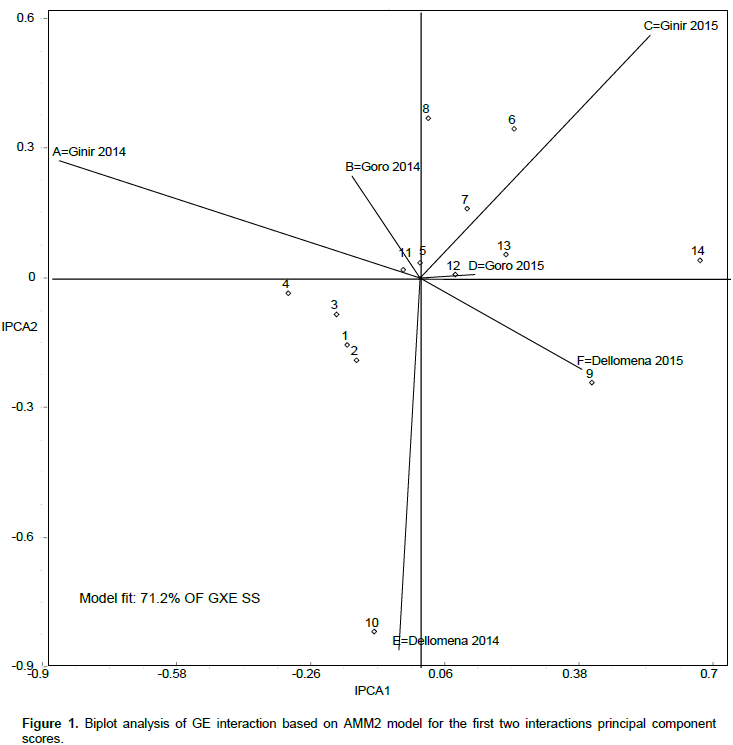 AMMI analysis of multi-environment yield trials serves two main purposes:
(1) Understanding complex GEI, including delineating mega-environments and selecting genotypes to exploit narrow adaptations, and
(2) Gaining accuracy to improve recommendations, repeatability, selections and genetic gain.
Therefore, according to the present study, genotypes G5, G11 and G12 display higher adaptability and stability. Therefore, they are recommended to be used in all environments included in the study. The genotypes G13 and G7 present high mean productivity. However, they were unstable and specific adaptation to the environments of high quality that is, environment D. Environment A gives the highest mean grain yield (2.395t/ha) and environment B (0.80t/ha) gave the lowest mean grain yield. These can be considered as an example of favorable and unfavorable environments respectively. Therefore, from this study G5 and G11 were considered as the most stable genotypes and therefore, identified as candidate genotypes for possible release.