In India, rice area increased from 36.46 million hectares in 1960s to 42.86 million hectares in 2010 to 2011, production from 39.31 million tonnes in 1964-1965 to 95.98 million tonnes in 2010-2011 and productivity increased  from  1078  to  2239 kg ha-1  during  the  same period (CMIE, 2012 Cultivation of specialty rices like medicinal rice which fetches substantially higher prices is more profitable (Swaminathan, 2004).
Njavara (shashtika in Sanskrit), a rice (Oryza sativa L.) landrace   described   in   ancient   Sanskrit   treatises   ofAyurveda for its nutritive and medicinal properties, is traditionally used in Kerala for Ayurveda treatments (Kumar et al., 2010). Njavara is widely used for internal consumption as an efficient health food as well as for external application under Panchakarma treatment. Ayurvedic physicians use Njavara for a wide range of ailments including rheumatism, arthritis, cerebral palsy, muscular dystrophy, blood pressure and also for the relaxation and rejuvenation of weak muscles in aged persons. At present, Njavara cultivation is confined to some pockets mainly in the Northern part of Kerala. No other medicinal rice is used in the world as widely as Njavara is used in Ayurveda (Thomas et al., 2006). Production is not sufficient even to meet the indigenous demand. At present, Njavara is exported in a very small extend. Its importance as a health food offers opportunity to establish niche global market (Balachandran et al., 2006). Based on glume color differences, two types of Njavara are recognized, black and golden yellow glumed types. Seed color of the black glumed variety is red and highly resistant to drought conditions. It matures in about 60 to 90 days and reaches about more than 1 m height (Menon, 1996). Under the conventional management system this short duration landrace is low tillering and low yielding. Increase in the yield of Njavara, even in small increments, is of great relevance in the present rice production scenario. Keeping this in view, the present study was undertaken to study the response of medicinal rice Njavara to nutrient sources under management systems like System of Rice Intensification (SRI), Integrated Crop Establishment Method (ICM), Package of Practices (PoP) of KAU and Conventional Management Practices.

Site and soil description
Field experiments were conducted for two consecutive years, that is, summer/third crop/puncha season of 2007 and 2008 at Cropping Systems Research Centre, Karamana, Thiruvananthapuram, Kerala. The soil was acidic in reaction (5.5 pH), high in organic carbon content (1.23%), medium in available nitrogen (261.9 kg ha-1), available phosphorus (22.0 kg ha-1) and available potassium (140.2 kg ha-1) status.
Experimental treatments and design
The experiment was laid out in a split plot design with three replicates. The establishment techniques in main plot were SRI (M1), ICM (M2), PoP (M3) (Recommendation of Kerala Agricultural University) as well as the Conventional Management Practices (M4) while nutrient sources including, organic sources (S1), integrated nutrient sources (S2), and inorganic sources (S3) were used in sub plot.
Crop husbandry
In SRI treatments, single, eight day old seedlings were transplanted at 20 × 20 cm spacing. Four weedings with rotary weeder were given at 10 days interval starting from 10 days after transplanting (DAT) to panicle initiation (45 days). Soil was kept at field capacity up to panicle initiation and then onwards 5 cm standing water was allowed in the field till 10 days before harvesting. In ICM treatments, two seedlings of 12 days age were transplanted at 20 × 20 cm spacing. Two rotary weedings on 10 and 20 DAT were given followed by one hand weeding on 35 DAT. A thin film of water was kept in the field till 10 days before harvesting. In PoP treatments, three seedlings of 18 days age were transplanted at 15 × 10 cm spacing. Weed control was achieved through one manual weeding on 15 DAT and application of 2, 4-D at 1 kg a.i ha-1 on 25 DAT. Water level was maintained at about 1.5 cm during transplanting. Thereafter, it was increased gradually to about 5 cm, intermittent draining and reflooding was done. Field was drained 10 days before harvesting. In conventional management practices pre germinated seeds were broadcasted at 80 kg ha-1. A thin film of water was maintained up to 10 DAS after which water level was raised up to 5 cm and field was drained 10 days before harvest. Two manual weedings were done at 15 and 35 DAS.
Data recording
Plant height
Plant height was recorded at panicle initiation and at physiological maturity (at physiological maturity the crop will have maximum dry matter). After physiological maturity, senescence starts and lose of dry matter occurs, using the method described by Gomez (1972).  Height was measured from the base of the plant to the tip of the longest leaf or tip of the longest ear head, whichever was longer and the average of five plants was recorded in centimetres.
Leaf number hill-1
Leaf count was taken from the five tagged observation hills at panicle initiation and physiological maturity and mean was expressed as number of leaves hill-1.
Leaf area index (LAI)
LAI was computed at panicle initiation and physiological maturity, using the method described by Gomez (1972). The maximum width ‘w’ and length ‘l’ of all the leaves of the middle tillers of six sample hills were recorded and LAI was calculated using the relationship.
Leaf area of a single leaf   =   l × w × k
where k is the adjustment factor (0.75 at maximum tillering, panicle initiation and flowering and 0.67 at harvest stage).

Number of tillers m-2
Number of tillers m-2 was recorded at weekly interval during the period between two to seven weeks of transplanting/sowing (maximum tillering) and at physiological maturity.
Grains panicle-1
Grains from five panicles collected randomly from the net plot were counted and the  mean  value  was  expressed  as  the  number of grains per panicle. 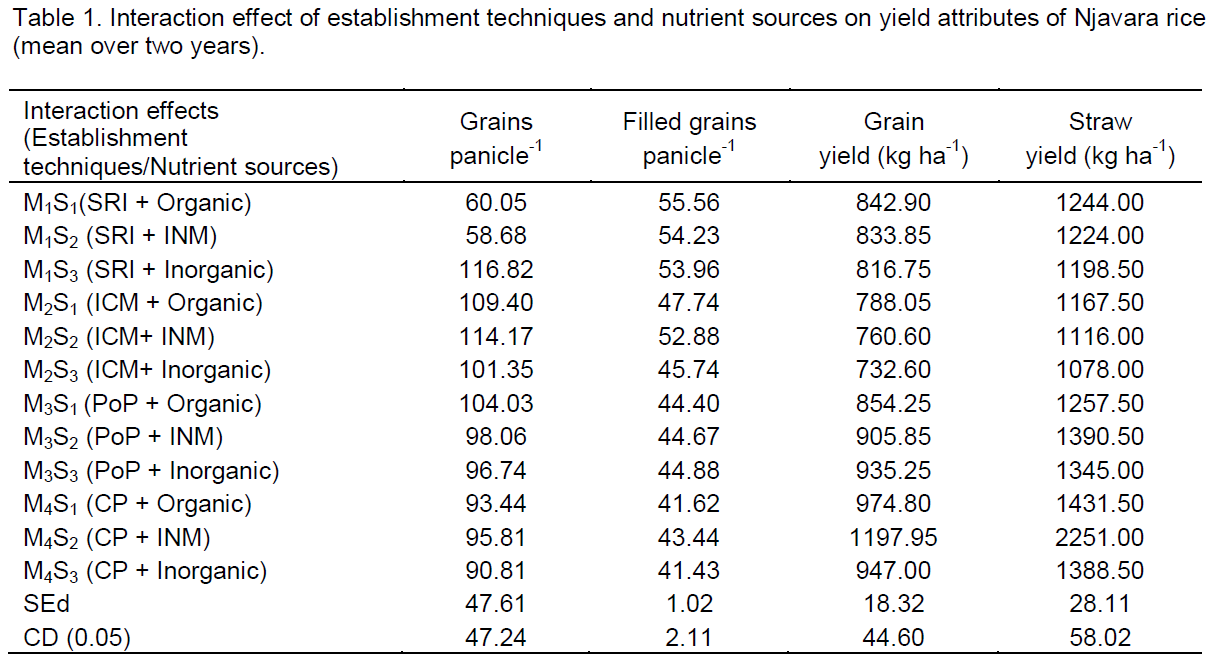 Number of filled grains panicle-1
The central panicle from each sample hill was threshed separately and the numbers of filled and unfilled grains were recorded.
Grain and straw yield
The net plot area was harvested individually, threshed, winnowed, dried, weighed and expressed in kg ha-1. Straw harvested from each net plot was dried in sun and the weight was expressed in kg ha-1.
Economics of cultivation
The economics of cultivation was worked out based on the costs of the various inputs and produce at the time of experimentation. Total cost of cultivation of the treatments was a sum of basic cost of cultivation, cost involved for management systems and cost involved for nutrient sources.
Net income
Net income was computed using the formula:
Net income (Rs. ha-1) = Gross income - Total expenditure
Benefit cost ratio
Benefit cost ratio was computed using the formula:
BCR = Gross income/Total expenditure
Statistical analysis
Data  recorded  during   the   field   investigation   were   statistically analyzed with split plot design method as suggested by Gomez and Gomez (1984) for test of significance. Wherever, the treatment differences were found significant, the critical differences were worked out to 5% probability level and the values furnished. 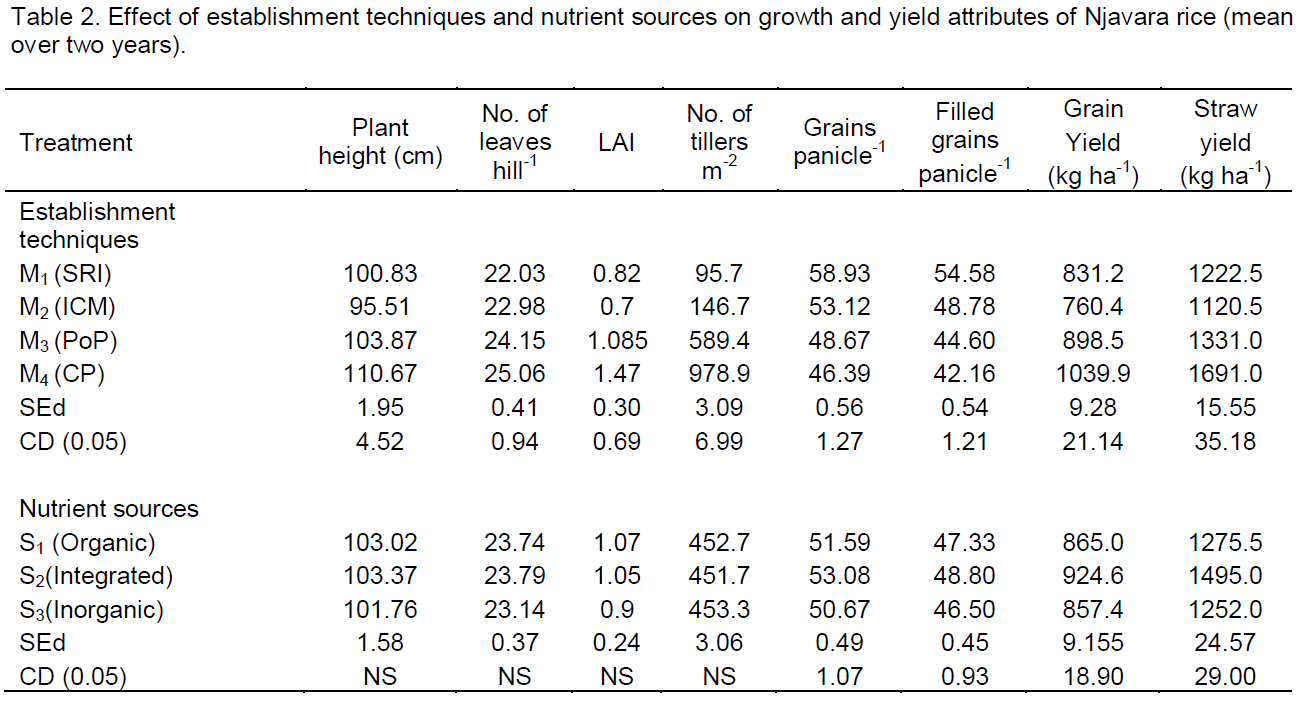 Effect of management systems and nutrient source on yield

SRI with organic source (M1S1) registered the maximum grains per panicle which was on par with SRI with integrated nutrient source (M1S2) and SRI with inorganic source (M1S3). Bozorgi et al. (2011) also reported that high plant density resulted in higher percentage of unfilled grains. Wang et al. (2002) observed lower sterility percentage with single seedling per hill than with two seedlings hill-1. Among the interactions, conventional management practices with integrated nutrient source (M4S2) recorded the highest grain yield (1197.95 kg ha-1) (Table 1), which was significantly superior to all other interactions. Significantly, higher grain yield realized in conventional management practices may be attributed to the significantly better growth and yield parameters realized in this treatment compared to other management systems. Straw yield also showed the same trend like grain yield in management system, nutrient sources and its interactions.

Higher number of grains and filled grains per panicle were recorded in SRI (M1) which was followed by ICM, PoP and conventional management practices, respectively. Maximum grain yield recorded in conventional management practices (M4) (1039.9 kg ha-1) was 13.5% higher than PoP, 20% higher than in SRI and 27% higher than ICM (Table 2). Significantly higher grain yield realized in conventional management practices may be attributed to the significantly better growth and yield parameters realized in this treatment compared to other management systems. Significantly higher growth characters like leaf number per plant, leaf area index, flag leaf area, tiller number per unit area and leaf area duration might have resulted in increased photosynthesis and production of photosynthates which finally transformed into significantly higher number of panicles per unit area and higher relative accumulation of dry matter in the panicles. Among the nutrient sources, integrated nutrient source (S2) recorded the maximum grains per panicle and filled grains per panicle. It was significantly higher than organic source and inorganic source having the least value. The highest grain yield (924.6 kg ha -1) was obtained in integrated nutrient source (S2) which was followed by organic source (865.0 kg ha-1) and inorganic source (857.4 kg ha-1), respectively. 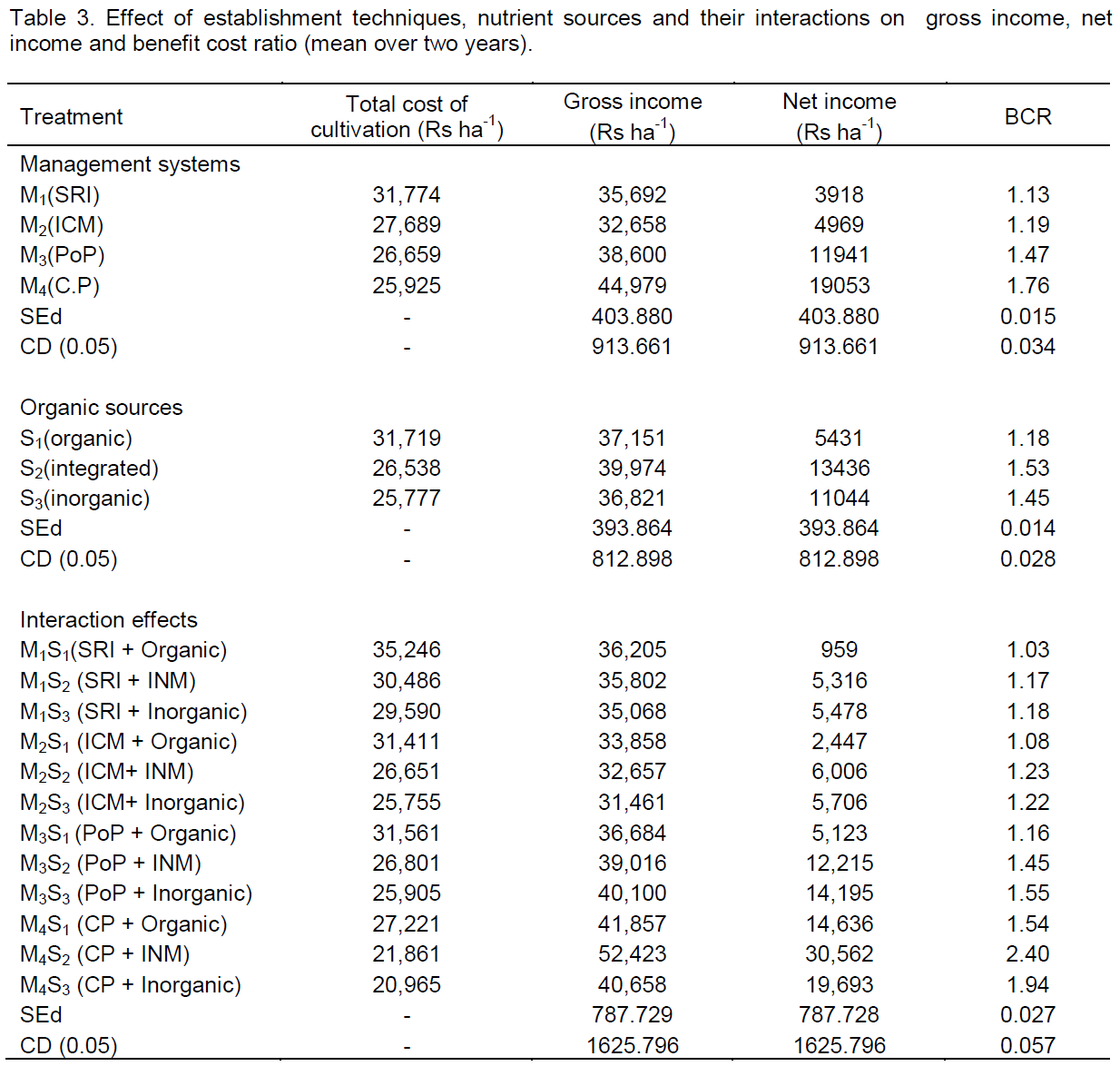 Njavara rice  responded to establishment techniques and nutrient sources. Crop growth and yield were the highest in conventional practices followed by PoP, SRI and ICM. Among the nutrient sources, integrated nutrient source was the best followed by organic and inorganic, with respect to crop yield and economics. Sources of nutrients did not influence growth characters in Njavara. Even though Njavara did not respond to SRI and ICM to the same extent in tillering like other varieties, all the tillers produced in SRI were productive tillers and 91% of the tillers produced in ICM bore panicles. It is observed that in transplanted crops (SRI, ICM and PoP), number of productive tillers per hill increased with increase in number of seedlings per hill. Similar results were reported earlier by Obulamma and Reddy (2002). Conventional management practices coupled with integrated nutrient source can be considered as the ideal crop production package for Njavara rice in lowlands.