Consumers are increasingly aware and concerned about their health and therefore demanding for more healthy and nutritious food. Thus, the demand for organic foods has increased recently. Thus the aim of this study was to compare the antioxidant activity and total phenolic content of lettuce produced in organic and conventional systems. The antioxidant activity of ethanol extracts was determined by the DPPH and FRAP assay. The total phenolics content was obtained spectrophotometrically according to the Folin-Ciocalteu method and calculated as gallic acid equivalent. The organic lettuce showed higher effectiveness in antioxidant capacity and higher levels of phenolic compounds than lettuce produced in the conventional system.

The current concern with men’s health has led to a demand for healthier foods, thus providing a better life quality. Some natural products present high levels of antioxidants that are responsible for the prevention of various diseases. Antioxidants are molecules that inhibit or decrease the damages provoked by free radicals (Shahidi and Ambigaipalan, 2015). Free radicals can be produced  by   exogenous   sources   or   by   the  natural metabolic reactions.

The human metabolism synthesizes free radicals during its physiological reactions that interact with DNA, RNA, proteins, lipids and polysaccharides causing serious damage as degenerative diseases. Vitamins C and E, phenolic compounds, flavonoids and carotenoids are extremely relevant antioxidants that can be acquired through a  balanced  diet of vegetable origin (Nizmse and Pal, 2015)

The consumption of fruits, cereals and vegetables are effective free radicals that fight foods. According to Borges et al. (2016), some studies indicate that the use of organic fertilizers can influence the synthesis of antioxidant compounds. The organic products are better than the conventional, however the studies comparing foods from both managements still scarce.

Lettuce (Lactuca sativa L.), belonging to the Asteraceae family, is native from Mediterranean (Medeiros et al., 2016), but is currently cultivated in innumerous regions and is the most popular and appreciated hardwood vegetable.

The phenolic profile of lettuce is well defined and reported in the literature with caffeic acid derivatives and flavonoids, representing the main component class. However, genetic and environmental factors can influence in the phytochemical profile of plants. Therefore, the variety planted, weather, soil type, the light intensity, irrigation, the supply of nutrients, plage control, the system of cultivation, among others can influence on the chemical content of plants (Sofo et al., 2016; Santos et al., 2014; Perez-Lopez et al., 2018; Durazzo et al., 2014).

Several studies analyzing the antioxidant properties of fruits, vegetables, and medicinal plants have been reported (Talens et al., 2016; Calado et al., 2015; Turati, 2015). However, a few papers show the influence of the cultivation type on antioxidant action of these foods. There is a tendency that organically produced foods have lower nitrate content, highest content of vitamin C and dry matter as well a high content of compounds with antioxidant action, such as flavonoids and carotenoids (Reganold and Wachter, 2016; Baranski et al., 2014; Williams et al., 2016). On the other hand, Aires (2016) showed that the organic foods are similar to conventional ones. However, Baranski et al. (2014) concluded that organic crops present higher concentrations of antioxidants than conventional crops.

The study was carried out in a greenhouse unit with planting being held in 2.5 L vases with 2 treatments types (conventional and organic fertilizer), using 30 samples for each treatment. The fertilization was performed from the soil analysis according to Table 1.

The crude extract was obtained by maceration in ethanol, using the leaves of organic and conventional lettuce. Then the material was dried in an oven at 50°C and crushed at a mill knives; purchasing a dry powder which was submitted to maceration with ethanol  99.5% with filtering every 24 hours for five days. The the material was dried in the 40°C on a rotary evaporator BUCHI Heating Bath B-490. The percentage yield was calculated using the following equation:

The total phenol content of the samples was determined by the Folin-Ciocalteau method (Scherer and Godoy, 2014). 100 μL of the methanolic solution of the sample, 500 μL of the aqueous Folin 1:11 (v/v) solution and 400 μL of the aqueous Na2CO3 solution (7.5%) were added in eppendorf flasks. The solution was stirred in a vortex for 30 seconds. After an aliquot of 250 μL transferred to 96-well plate, and kept in the dark for 2 hours and analyzed using a plate reader spectrophotometer at 740 nm. The results were expressed in mg Gallic Acid equivalent/g dry extract. All experiments were realized in triplicate.

From stock solutions (1.0 mg/mL) of samples of conventional lettuce (CL) and organic lettuce (OL), test solutions were prepared at concentrations of 500 to 6 µg/mL (CL) and the 250 µg/mL (OL). An aliquot of 100 µL of sample test solution were transferred to a 96-well plate and 40 µL of methanolic solution of 2.2-diphenyl-1-picrylhydrazyl (DPPH) 0.3 mM. Blank solution was prepared using 100 ï­L of sample test solution and 40 ï­L of methanol for each concentration. Control solution was prepared using methanol (100 ï­L) and DPPH 0.3 mM. The samples was kept in the dark for 30 minutes and analyzed in a plate reader spectrophotometer at 518 nm. All experiments were realized in triplicate. The antioxidant activity percent was obtained using the follow equation:

The Ferric reducing antioxidant power test was realized as described by Aras et al. (2017). The FRAP test was realized using 30 µL of methanolic sample solution, 90 µL of distilled water and 900 µL FRAP reagent (25 mL of acetate buffer 0.3 M, 2.5 mL of 2,4,6-Tri(2-pyridyl)-s-triazine (TPTZ) 10 mM and 2.5 mL of an aqueous solution of ferric chloride 20 mM). The test solutions were homogenized in the vortex and an aliquot of 250 ï­L was transferred to 96-well plate and kept at 37°C for 30 min. The sample absorbance was analyzed using a plate reader spectrophotometer at 595 nm. The trolox standard curve was constructed from these test solutions at concentrations of 10 µM a1000 µM. The results were expressed in µΜ Trolox equivalent/g of extract. All experiments were realized in triplicate (Table 3).

Varying  the  concentration  of  gallic  acid,  the  analytical curve could be obtained, with excellent repeatability and linear correlation coefficient (0.995) (Figure 1). 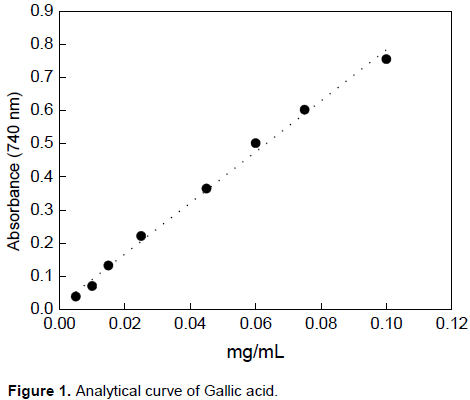 The total phenols content were obtained from the absorbance values of the samples, using the straight line equation of analytical curve of Gallic acid. The results were expressed as mg Gallic acid equivalent per gram of sample. As seen in Table 1 the values of this study were different from those obtained by Kapoulas et al. (2017) and Fontana et al. (2018) for different lettuce cultivars.

The analytical curve was  constructed  from  the  samples absorbances of trolox (Figure 2).

From the absorbance values at 595 nm and using the straight line equation of the analytical curve of trolox, the FRAO levels were obtained (Table 2). It turns out that there was a significant difference (P < 0.05) between the lettuces produced in both cropping systems. Lettuce produced with organic fertilizer sources presented 18.47% more antioxidant activity as against that produced with conventional sources. It was verified a significant difference (P<0.05) between both culture systems. Organic lettuce presented 18.47% more antioxidant activity than lettuce produced from conventional sources. 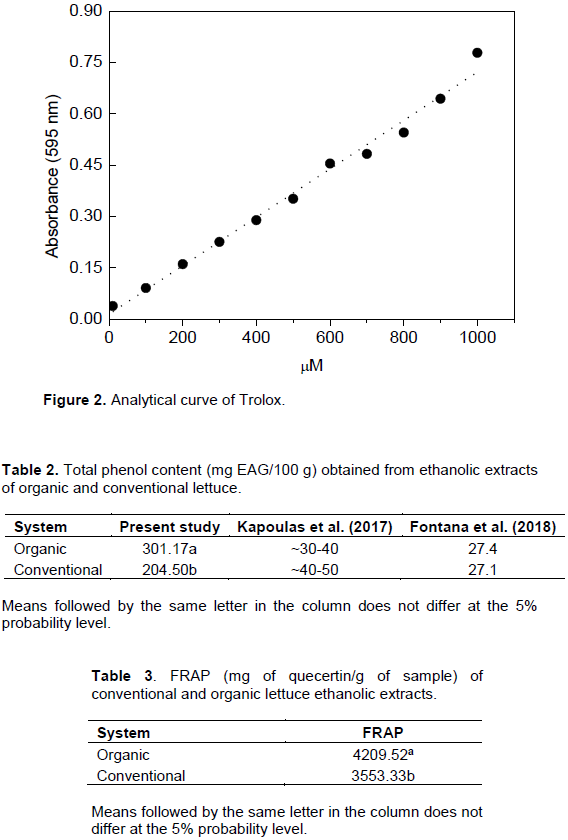 The antioxidant percent (AAP%) were obtained from the samples’ absorbance in different concentrations (Figures 3 and 4). 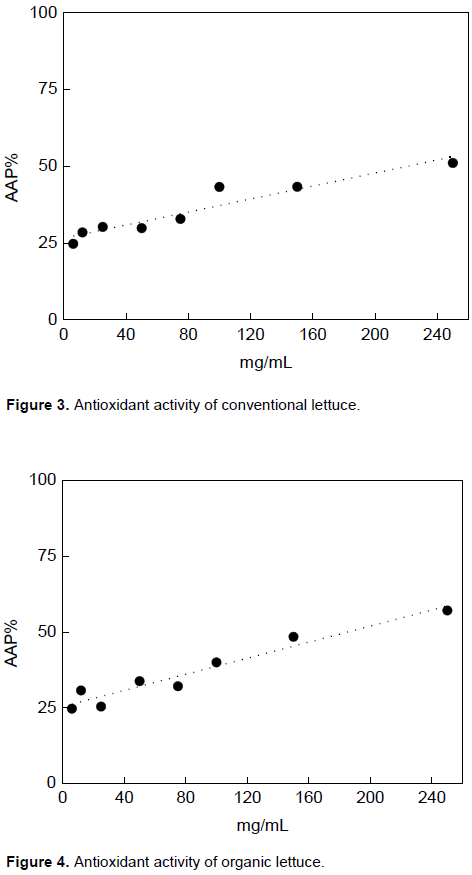 The changes in the antioxidant effect of extracts depending on the concentrations, the results are presented by CE50 value, since this parameter indicates the concentration of the sample needed to promote 50% of AAP%. The lower CE50 value, the higher the antioxidant activity. From the results of absorbance of the sample, an analytical curve was constructed and through the straight line equation the CE50 was obtained. To calculate the CE50 for conventional and organic lettuce, the equation 3 and 4 were used, respectively.

The CE50 values are listed in Table 4. It was verified that the organic lettuce showed the highest antioxidant capacity  (CE50   =   0.18 mg/mL)   than  the  conventional lettuce (CE50 = 0.22 mg/mL). These results are similar to those obtained by Harsha et al. (2013) that detected 0.16 mg/mL in organic lettuce and by Kurubas et al. (2018) who found that lettuce produced in organic systems presented  a  higher  effectiveness in antioxidant capacity when compared with the conventional lettuce.

Rigueira et al. (2017) verified that the leaves and stems of collard greens cultivated in organic system had a higher antioxidant activity and levels of phenolic compounds compared to the conventional system.

The difference between these results may be due the use of different cultivars and environmental conditions where the experiments were developed. Similarly, Kim et al. (2018) found that cultivating as well as color of lettuce can change the phenol content and antioxidant activities. Therefore, the levels of phenolic compounds and antioxidant activities can change depending on the genetic material, applied management and climatic conditions used. Thus, Durazzo et al. (2014) showed the importance of cultivating, agronomic practices, edaphoclimatic, harvest and harvest season. According to the authors the variation of these elements represents the role to getting more nutritious, healthy and maximizing levels of bioactive molecules in food.

There was a better performance of organic lettuce when compared with the conventional. Comparative studies between these fertiling systems explain that the greater effects of antioxidant activity and levels of phenolic compounds are due to biotic and/or abiotic stress that plants are subjected. Baranski et al. (2014) reported that the increase of phenol content in organic lettuce it can be due to environmental stress on plants that have not received pesticides or synthetic fertilizers for your development.  Sharma et al. (2017) showed that the highest content of phenolic compounds in organic brassica leaves is probably due to interference of inorganic fertilizers and pesticides with the biosynthetic role of phenolic compounds.

The biosynthesis of phenolic compounds in plants is strongly influenced by cultivar (Aires, 2016), fertilization (Medeiros et al. 2016), temperature, light and seasonal variations (Kapoulas et al., 2017; Kurubas et al., 2018). The presence of higher concentrations of polyphenols in plants could be explained by a greater absorption of phosphorus and a limited nitrogen availability (Fan et al. 2017). The discovery that organic crops have a lower N, NO3- and NO2- concentrations support the theory that differences of concentrations of antioxidants/phenolic compounds between organic and conventional crops are influenced by different nitrogen levels supply. This hypothesis is supported by previous studies that have suggested that under high nitrogen availability, plants can allocate    photosynthesis     carbohydrates     to   primary metabolism and rapid growth while producing less amounts of secondary metabolites involved in your defense (Caretto et al., 2015).

This study does not show incidence of plagues, diseases or pesticide application, thus the effects are due the sources of fertilizer used. The increased amounts of phenolic compounds and antioxidant activity are due to the gradual release of nutrients and during the development of plants.

The authors declare that they have no conflict of interest.