The current study was conducted to assess the trait association and path analyses in thirty-six rain fed lowland rice genotypes at two locations. The aim of this present study was to estimate the extent of association between pairs of characters at phenotypic and genotypic levels and thereby compare the direct and indirect effects of the characters. The field experiment was laid out in 6x6 simple lattice design with two replications during 2015/16 cropping season. Thirteen characters were measured including yield and related traits. The extent of phenotypic correlation coefficient values indicated presence of fairly strong inherent association among the studied traits. Moreover, association analyses studies indicated yield had significantly (p<0.05) positive genotypic correlation with days to heading, days to maturity, filled grains per panicle, fertile tillers per plant harvest index, total spikelets per panicle and biomass yield. Path coefficient analyses revealed that biomass yield followed by harvest index, total spikelets per panicle and plant height exhibited the highest direct effects on grain yield; these traits can be considered for direct selection for grain yield of rice.

The major cultivated species of rice, Oryza sativa (2n=2x=24), originated in Southern and South Western Tropical Asia. The other species of cultivated rice, Oryza glaberrima (2n=2x=24) is indigenous to the upper valley of the Niger River and it is cultivated only in Western Tropical Africa (Ansari et al., 2015). Rice provides the two-thirds of calories  intake  for  more  than  three  billion people in Asia and one-third of calories intake of nearly 1.5 billion people in Africa and Latin America (Khan et al., 2015).
In Ethiopia, rice is A source of income and employment opportunities for rice farmers. It is used in the preparation of local foods such as injera, dabbo, geniffo, kinchie, shorb and local beverage like tela  and  arki  (Gebrekidan
and Seyoum, 2006; Asefa et al., 2011). Rice production in Ethiopia is predominantly constrained by biotic stress like termite, blast, brown spot diseases, and weeds; abiotic stress such as cold, drought, salinity and soil acidity are the major problems for production of rice. In addition, shortage of adapted varieties to different agro-ecologies and lack of recommended crop management practices for different rice ecosystem (MoARD, 2010; NRRDSE, 2009; Lakew et al., 2014), lack of awareness on its utilization, inadequate technology promotion and seed supply, skilled manpower, erratic rainfall, flood and rice seed shattering was observed (Meron, 2016).
Rice consumers are increasing at the rate of 1.8% every year (Puhan and Siddiq, 2013). The world population is increasing day by day and by 2050 it is expected to reach 9.1 billion; however, agricultural production and productivity is not yet getting higher at a parallel pace (Wani and Sah, 2014). According to an estimate, there are approximately 925 million people on the globe who live in a state of hunger (Karimizadeh et al., 2011). In a bid to eradicate that ugly spot of hunger from the beautiful face of the humanity, we need to significantly increase the production and supply of food by integrating different elements and strengthening the plant breeding tools for crop improvements (Beddington et al., 2012).
Knowledge on association of crop trait for yield with other related traits are essential to the breeder for making crop improvement in a complex quantitative trait such as yield and for which trait direct selection is not much effective. Hence, association analysis is important for determining the direction of selection and number of traits to be considered in improving grain yield (Idris et al., 2012). Path coefficient analysis is a standardized partial regression coefficient and as such measures the direct and indirect effect for one variable upon another and permits the separation of the correlation coefficient into components of direct and indirect effect (Dewey and Lu, 1959). Since yield is a complex trait, indirect selection through correlated is less complex and easier measurable traits would be an advisable strategy to increase the yield. Efficiency of indirect selection depends on the magnitude of correlations between yield and target yield component traits (Bhatti et al., 2005). Breeding strategy in rice mainly depends upon the degree of associated traits as well as its magnitude and nature of variation (Zahid et al., 2006).
Rice breeders are interested in developing cultivars with improved yield and other desirable agronomic traits. In agriculture, path analysis has been used by plant breeders to assist in identifying traits that are useful as selection criteria to improve yield (Dewey and Lu, 1959; Milligan et al., 1990). However, information about trait association between yield and related traits in lowland rice improvement program is not yet well studied. Therefore, in view of this gap, the present study was carried out to evaluate the association between yield and related traits with the objective of estimating the extent of association between pairs of traits at genotypic and phenotypic levels and thereby comparing the direct and indirect effects of the traits.

Description of the study areas
The experiment was conducted in 2015/16 cropping season at Pawe Agricultural Research Center and Fogera National Rice Research and Training Center. The locations are situated in North Western part of Ethiopia in Benishangual-Gumuz and Amhara Regional States, respectively.
Fogera National Research and Training Center is located 607 km from Addis Ababa in the North Western part of Ethiopia. Particularly, the experimental site is located at 11° 58'N latitude, 37° 41'E longitude and at elevation of 1810 m above sea level. Based on ten years average meteorological data, the annual rainfall, mean annual minimum and maximum temperatures are 1300 mm, 11.5°C, respectively. The soil type is black (Vertisol) with average pH of 5.90.
Pawe Agricultural Research Center is located 578 km away from Addis Ababa. The experimental site is found at 13° 19’ N latitude, 37° 24’ E longitude and at an elevation of 1200 m above sea level. The major soil type of the study site is well drained Nitisol with the pH value ranging from 5.3 to 5.5. The annual rainfall, mean annual minimum and maximum temperatures are 1587 mm, 16.3°C and 32.6°C, respectively.
Experimental materials, design and trial management
The present study contained a total of thirty-six rice genotypes including two checks (Ediget and X-jigna). All rice genotypes were obtained from Fogera National Rice Research and Training Center and were introduced from Africa Rice. The experiment was laid out in 6x6 simple lattice design at each location. The plot size was six rows of 5 m length with 0.2 m row spacing giving a total area of 6 m2 spacing of 1.0 m and 0.30 m were used between blocks and plots, respectively. For data collection, the middle four rows were used for determination of yield and yield component traits. The genotypes were planted by manual drilling at a rate of 36 g per plot in 2015/16 cropping season at two locations. Recommended fertilizer of Urea and DAP at the rate of 64 kg N ha-1 and 46 kg P2O5 ha-1 was applied to each experimental plot. P2O5 was applied all at planting time while N was applied in three splits (1/3 at planting, 1/3 at tillering and the remaining 1/3 at panicle initiation) according to the national rice fertilizer blanket recommendation at each location. Weeding was done by hand two to three times starting from 25-30 days after sowing depending on infestation level. All other important agronomic practices were applied as per the recommendation for rice production in the two locations during the growing season.
Data collection
14 quantitative traits of morphological data at right growth stage of rice were collected and recorded according to two rice descriptors (IRRI, 2002; Bioversity International, 2007). Days to 50% heading, fertile tillers per plant, plant height (cm), Panicle length (cm) culm length (cm), flag leaf length (cm), number of filled grains per panicle, number of unfilled grains per panicle, number of total spikelets per panicle, days to 85% maturity, biomass yield per plot (gram per plot) grain yield per plot (gram)  thousand  grains  weight(g) and harvest index (%) were collected.
Data analysis
Path analysis, phenotypic and genotypic correlations data was subjected to analysis using SAS 9.2 (SAS, 2008) and GENRES Statistical Software, 1994).
Correlation coefficient analysis 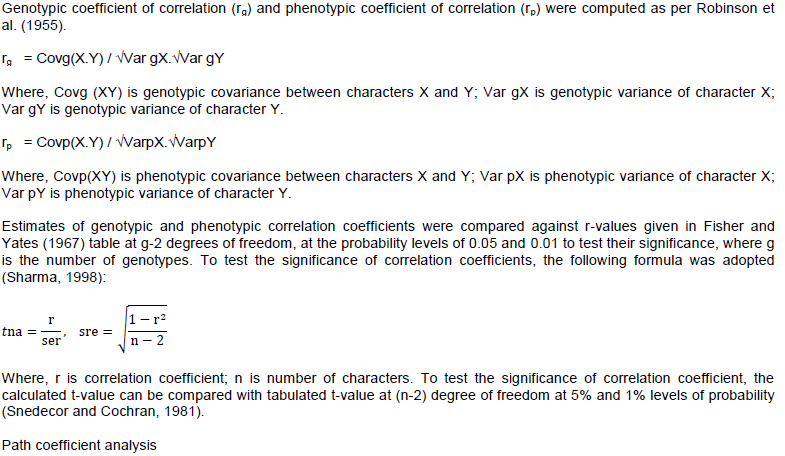 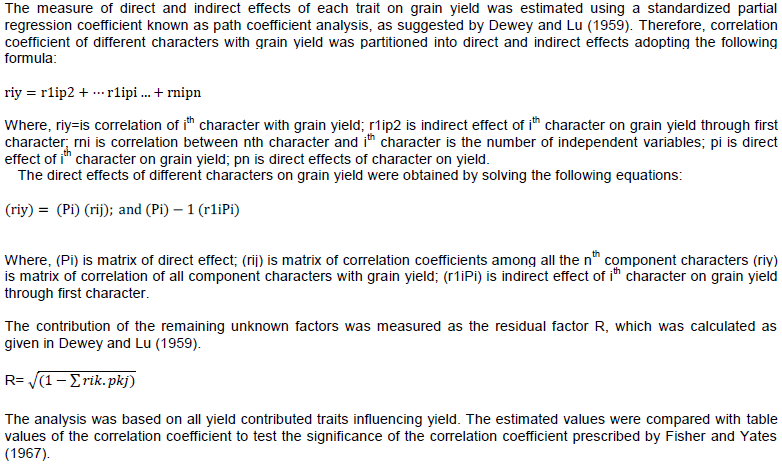 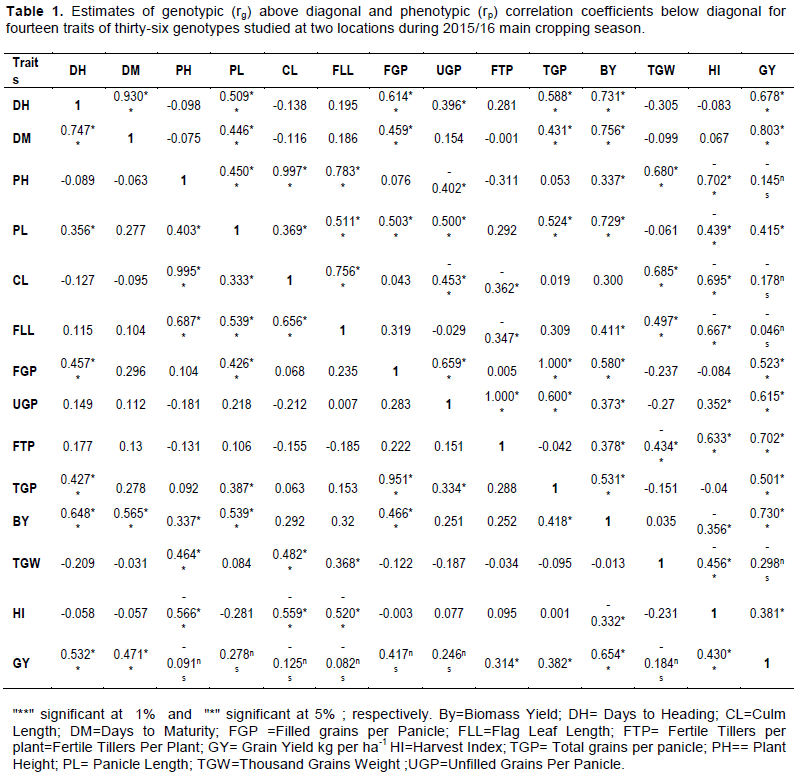 Yield exhibited positive and highly significant (P <0.01) genotypic correlation with traits like days to heading, days to maturity, filled grains per panicle, fertile tillers per panicle, harvest index, total grain per panicle and biomass yield, respectively. This indicates the importance of these traits for yield improvement in rice. Thus, the indirect selection for higher yield based on these characters would be reliable.
Path coefficient analysis revealed that biomass yield, harvest index and number of total grains per panicle had the highest direct effect on grain yield with significant and positive genotypic association, which indicates that the correlation explains the true association with grain yield and direct selection through those traits will be effective. Thus, selection of genotypes with more harvest index, biomass yield, plant height and total grains per panicle are important to develop high yielder varieties and an emphasis be given for these traits in future breeding efforts.