temperature and precipitation scorches the organic matter, which is a large reserve of organically bounded nitrogen which later converted into inorganic forms and utilized by plants with the deed of soil biota. Hence, high rate of organic matter decomposition severely depletes soil nutrients especially soil nitrogen and usually manifested in the poor performance of test crops in Ethiopia without any supply of inputs ((Banerjee and Pathak, 2002; Gete et al., 2010).

Different studies released recommendations since ninten seventy especially on nitrogen and phosphorus although it is blanket recommendation. Since then, the associated yield obtained from a given pieces of land decreases without the application of chemical fertilizers witnessing that there is a need for applying sufficient amount of nitrogen in the cropping systems in Ethiopia (Mulugeta et al., 2014). Therefore, the fertilizer import has been progressively increased for the last decade (Agricultural Input and Marketing Directorate, Minestry of Agriculture (MoA), Central Statistics Agenecy (CSA), 2010, 2011, African Fertilizer, FAO). Parallel to this, the national fertilizer consumption started at ninten seventy and gradually increased through ninten eighty, ninten ninty five and two thousand four and two thousand five which stood at 950, 43 200, 250 000, and 323 000 tons respectively. Based on the International Fertilizer Association’s (IFA) suggestion fertilizer application rate, nutrient uptake close to 4.3 million tons of nitrogen, phosphate, and potash is required to produce this much maize, wheat, barley, and sorghum(Si, 2018). However, CSA’s farm management practice data from two thousand three/ two thousand four to two thousand ten / two thousand eleven shows that the actual amount of fertilizer applied was 1.6 million tons, and when considering that a limited amount of nutrients from the fertilizer is actually taken up by the crops, more than 2.7 million tons of nutrients from the soil. A large portion of the uptake of nitrogen, which is the most important micronutrient for crop growth, is coming from the soil, given the fact that insufficient amounts applied (Khan et  al., 2013).

Sieling et al. (1998) reported that the mineral fertilizer NUE for winter wheat decreases with increasing N levels. Hatfield and Prueger (2004) also confirmed that the efficiency of N use by a crop depends upon the response of water and N availability during the growing season.

Accordingly, in Ethiopia urea as a source of nitrogen and DAP as a source of nitrogen and phosphorus  applied as a high-grade fertilizer in order to obtain optimum harvest. One of the major challenging issues especially in high rainfall and waterlogged area in connection with these are the loss of nitrogen through ammonium volatilization or fixation by clay minerals.  On the other hand, in low moisture area, its low solubility and toxic effect burns the root so as to reduce its growth and the performance of the crops grown under this condition also challenges the use of these  fertilizers.  The  national average yield of rice is about 2.8t ha-1 (CSA, 2018), which is lower compared to the world average productivity of 4.6 t ha-1 (FAOSTAT, 2018).

UREAStabil is a concentrated nitrogen fertilizer that can be applied as a granular for field crops as well as liquid fertilizer through irrigation water for the orchard (Wang, 2019). Besides, it supposed to have basic advantage of having a combination of rapidly soluble, well absorbable nitrogen with urease inhibitor that helps to improve nitrogen penetration to plant roots by restraining the sorption and fixation of NH4+ in the surface soil layer, which slows the effect of this nitrogen form down (Mohammad and Jamie, 2010). In another way it helps to reduce its losses due to ammonia volatilization into the atmosphere during surface application. However, this product has never been tested in our context. Therefore, this research is proposed:  To determine the effects of UREAStabil on the enhancement of nitrogen utilization efficiencies of the rice crop. To evaluate the influence of UREAStabil on the growth and yield of rice under waterlogged conditions.

Description of the study area

The rice variety X-jigna has rainfed lowland ecosystem adapatability and good characteristics of cold tolerance. The morphology of the variety is unerect leaf angle and unerect flage leaf angle. The genotype has intermediate type of panicle and purple color of the apex. The biomass response is promising and highly preferred by the producers with the right agronomic management practice. Inaddtion to the high biomas and yield performance white color grain of X-jigna variety chosen by the rice producing farmers (Mulugeta et al., 2021).

The soil in Fogera immeasurably require nitrogen fertilizer and with out N fertilizer yield is not expected but other macro nutrients like P & K deficiency not highly observed. The experimental soil type was found to be vertisols and the textural class was clay loam. The pH (H2O) of the soil was 5.89 and soil organic carbon was 1.2%.

A method of organizing experimental data and information about the costs and benefits of various alternative treatments. A partial budget analysis methodology is a way of computing the total costs that vary and the net benefits of each treatment in an on-farm experiment. Includes the average yields for each treatment, adjusted yields and gross benefit (based on the field price of the crop). It also incorporiates all the costs that vary for each treatment (CIMYYT (1988).  The N use efficiency of mineral N fertilization was calculated according to Craswell and Godwin  (1984);  Fageria  and Baligar (2001) and  Sofoniyas et al. (2018) by equation:

Panicle length was not significantly affected by conventional urea and UREAStabil fertilizer application where as the number of total tillers were highly significantly (P<0.01) affected. The highest number of tiller (260.7 per m2) was found from the application of UREAStabil (136.5 kgha-1) at planting and tillering stage where as the lowest number of tiller (154.7 m-2) was found from the control without application of nitrogen fertilizer (Table 1). Similar results reported as rice is a unique crop with an indeterminate tillering potential, and the actual tillering number is easily influenced by nutrients availability, planting density and variety (Guangli et al., 2017). Split application of conventional urea fertilizer (136.5 kgha-1 at planting (45.5 and 91 kgha-1 at tillering stage) had resulted 245.7 tiller number per m2. 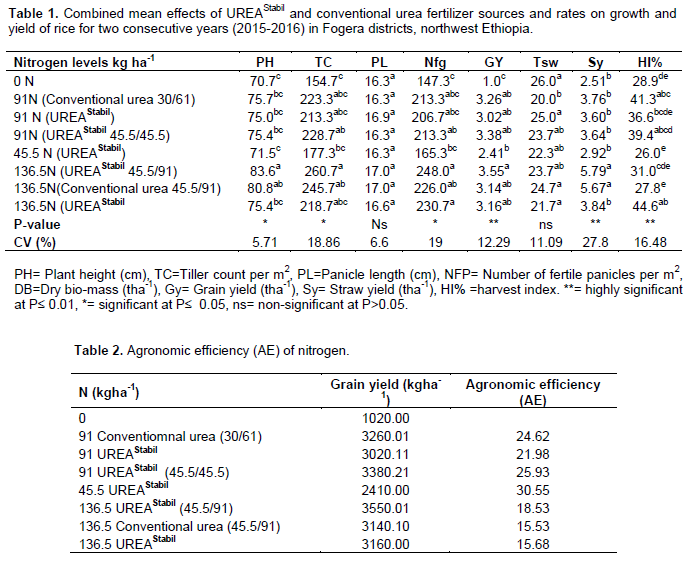 The rice harvest index was highly significantly (P<0.001)   affected  by  the  UREAStabil.  The  highest  HI (44.6) was shown from 136.5 kg N ha-1 from UREAStabil source of nitrogen applied once at planting and the lowest (26.0) from 45.5 N as the source of UREAStabil followed by 91 kg N ha-1  (41.7 HI) from conventional urea split application among nitrogen source of fertilizers. Similar results observed at the highest harvest index from the report of Worou et al. (2017). Higher grain yields in the fertilizer treatments were associated with higher harvest index.

The lower agronomic efficiency at the highest N rates in the current experiment indicate that emphasis  should  be given to efficient nitrogen application methods. The split application method even for slow release N fertilizer is highly essential for water logged areas like Fogera because that from the current experiment the AE is higher at split application of slow relase N source than from conventional urea N sources and real time of N management to reduce denitrification and loss of nitrogen fertilizer to efficiently use by the plant. AE N is usually higher at low N rate than at high N rate (Gewaily et al., 2018; Yasuhiro et al., 2019; Tilahun et al., 2020). 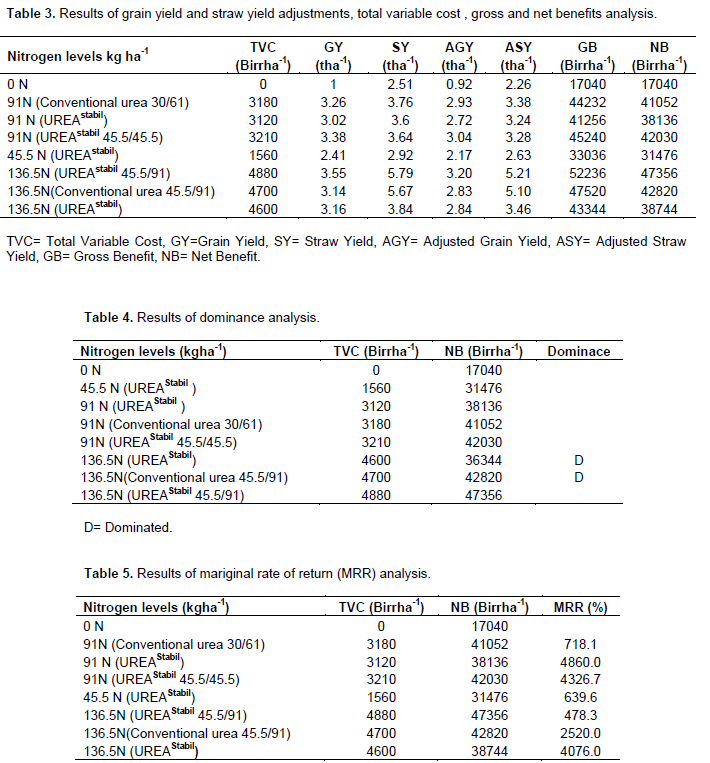 Following the CIMYYT (1988) partial budget analysis method, grain and straw yield adjustments, computations of total variable costs (TVC), gross benefits (GB) and net benefits (NB) were accomplished (Table 3). Dominance analysis was conducted after arranging the treatments in their order of TVC. A treatment will be contempleted as dominated if it has higher TVC but lower NB than a previous treatment with lower TVC and higher NB (Table 4). Non-dominated treatments were taken out and marginal rate of return (MRR) was computed (Table 5). According to the CIMYYT (1988) partial budget analysis, treatments revealing the minimum or more MRR (>100%) will be considered for the comparison of their NB. Highest NB  (Birr 47,356 ha-1) with acceptable level of MRR (478.3%) was observed at 136.5 kg N ha-1 split application of UREAStabil (45.5/91) (Table 5). Split application of 136.5 kg N ha-1 from UREAStabil source 45.5 kg N ha-1 as basal and 91 kg N ha-1 tillering stage is the most profitable rate and source to be recommended for low land rice production of Fogera area.

Based on the results of the present study both biological and partial budget analysis revealed that the highest grain yield and economic profitability was exhibited from 136.5 kg N ha-1 applied in the form of UREAStabil in split application 45.5 kg N ha-1 as basal and 91 kg N ha-1 tillering stage for water logged areas of Fogera and similar agro-ecologies in Ethiopia. Further research work for the improvent of nitrogen use efficeny of rice on slow release UREAStabil nitrogen sources of fertilizer incombination with micro nutrients also recommended.