Groundnut is an important component of the diet of both rural and urban populations in the Sub-Saharan Africa. The national average pod yield is 0.25 t/ha which is far less than the global average. The diverse environmental conditions of Zimbabwe make selection and release of stable groundnut genotypes a challenge, mainly due to genotype x environment interaction (GEI). Twenty-five groundnut genotypes were evaluated to examine the level and type of GEI on pod yield. The genotypes were evaluated under multi-environmental yield trial conducted in (2013/14 summer season) at five environments. The objectives of the experiment were to determine the presence of GEI on pod yield stability of groundnut genotypes, to identify genotypes that are specifically or widely adapted. General combined analysis of variance (GenStat Version 14) at 5% significance level indicated that genotypes (G) were not significant (p = 0.153), environments (E) and genotype x environment interactions (GEI) were highly significant (P < 0.05) on pod yield. The environment influenced yield of the groundnut genotypes. Environment and genotype explained 58.8 and 6.1% respectively of the total treatment variance, whilst the genotype by environment interaction accounted for 35.1%, indicating that environment influenced a lot on the performance of the genotypes. High significant level of GEI indicates that some genotypes may be released for specific environments. Basing on the mean pod yield value from the combined (ANOVA) analysis of variance results, groundnut genotype G24 (3.34 t/ha, check variety) was the highest yielder, followed by G7 (3.31t/ha) and then G2, G14 and G11 (3.29, 3.25 and 3.02 t/ha respectively). The results indicate that the experimental genotypes have great potential to be released and grown on large scale production. Stability analysis based on one multivariate or various uni-variate parameters to extract more information on the GEI on pod yield stability of groundnut is recommended.

Zimbabwean environment is so diverse and so sophisticated (Nyamapfene,  1991;  Rukuni  et  al.,  2006) and that leads to very high levels of genotype x environment   interactions   (GEI).   The    heterogeneous nature of the Zimbabwean environments (agro-ecological regions) results in the performance of different groundnut genotypes to differ both within and across environments. Higher genotype x environment interaction is usually expected to be as a result of large environmental differences as in Zimbabwe. In most cases, this kind of interaction may lead one genotype in having the highest yield in some environments and may be lowest in others, whilst the second genotype may excels in other environments in which the first one might have failed (Gauch and Zobel, 1996). For that reason, it is important to know and understand the level of the interactions in the selection of genotypes across several environments rather than only calculating the average performance of the genotypes under evaluation (Fehr, 1991; Gauch and Zobel, 1997).
It has been noted that genotypes tested in different locations or years often have significant fluctuation in yield due to the response of genotypes to environmental factors such as climate, soil fertility, pests and disease pathogens (Kang, 2004). These variations in yield are the ones that are usually referred to as genotype x environment interaction (GEI) and they are so frequent whenever experiments are conducted. Genotype x environment interactions has been studied in many crops by many different researchers. One of the major complications in all breeding programs is genotype x environment (G x E) interaction. It has been noted that a proper understanding of the environmental and genetic factors that causes the interaction as well as an assessment of their importance is likely to have a great impact on the development, evaluation and selection of superior germplasm (Magari and Kang, 1993; Basford and Cooper, 1998).
The phenotypic expression of an organism (plants/crops included) is due to its genotype (G), the surrounding environment (E) as well as the interaction of the two (G x E). The presence of significant GxE interactions complicates the process of selecting only genotypes with higher performance (high yielding) since the genotype is going to yield differently in different environments (this leads to change in rank order). For that reason, multi-environment trials are now broadly used to assess the suitability of genotypes for target environments (DeLacy et al., 1996).
When experiments are conducted under varying environments, genotypes that always give high average yields with minimum G x E interaction have been gaining importance over increased yields (Ceccarelli, 1989; Gauch and Zobel; 1997, Kang, 1998). The analysis of G x E interaction is closely related with the quantitative estimation of phenotypic stability of genotypes over different environments (Kang, 1998). When  significant  G x E interaction is observed, the effects of genotypes and environments are statistically non-additive; this implies that the differences between genotypes are due to the environment and not genotypes themselves. G x E interactions may, but not all the time, lead to different rank orders of genotypes in different environments. The presence of G x E interaction in multi environment trials leads to a need for the analysis of genotype stability (usually yield stability). Many authors have described yield stability in many different ways over the years and there have also been different concepts of stability tests (Lin et al., 1986). According to Becker and Leon (1988), many researchers use the terms adaptation, phenotypic stability and yield stability in different ways. Chahal and Gosal (2002) noted that stability indicates consistency in performance that would mean minimum variation among environments for a particular genotype.
The prime reason for researchers to perform multi-environmental genotype evaluation is to estimate and or predict how the genotype is likely to perform in future years and future environments, basing on the performance data of the past, and to develop or recommend superior ones. In almost all multi-location trials, there exists interaction and noise (Purchase, 1997). Selecting for high pod yielding and genotypes that have wide adaptation is the ideal situation that breeders would want to concentrate on rather than concentrating on genotypes that might give the highest pod yield in only one environment. Alternatively, in the case that there are no ideal genotypes, then selecting for specifically adapted genotypes would be the next option. That means the genotypes will be released and recommended for specific areas and not for the growing areas. This chapter focuses on the level and nature of G x E interaction based on the general combined analysis of variance techniques as a primary tool to differentiate these groundnut genotypes according to their pod yield performance.
This study was designed to (i) examine the level and type of Genotype x Environment Interaction for pod yield (ii) identify groundnut genotypes with high yielding varieties, and (iii) determine the need of doing pod yield stability analysis.

A total of 25 genotypes (4 commercially released varieties and 21 intermediate experimental lines) were tested in 2013/14 summer season. All the check varieties and the intermediated experimental lines were obtained from Crop Breeding Institute (C.B.I). Ilanda and Tern are the highest yielding short season groundnut varieties and for that reason they were included as check varieties. More details on genotypes and the information on their breeding status are highlighted in Table 1. 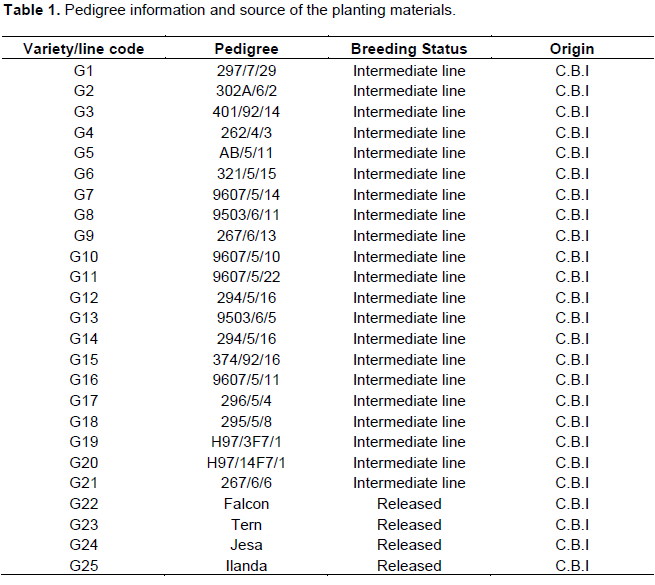 Management
The seeding rate that was used is 100 kg/ha for all environments.Compound D was applied at planting at a general recommendedrate of 300 kg/ha. Gypsum was also applied during first flowering (7 to 8 weeks after planting) at a general recommended rate of 300 kg/ha. Harvesting was done manually, were 2.4 m (0.3 m from either sides of the row) of the 3 m rows were harvested as net plot by way of hand pulling as well as hand plucking. Pod yield was then recorded after drying the groundnut pods to 12.5% moisture content by exposing the pods to the sun and moisture content was measured using the moisture meter. All other recommended groundnut production practices such as weed, pest and disease management were followed and practiced.
Experimental design
The  trials  were  laid  in  a  Complete  Randomized   Block   Design (CRBD) at all the sites (Figures 1, 2 and 3). Each of the twenty-five treatments with 3 replicates and that translated to seventy-five plots in total. The plot sizes were 5.4 m2 with 5 rows of 3 m long with spacing of 0.45 m between rows. The net plot size was 2.16 m2, 1 row from both sides and 0.3 m from either side was discarded. 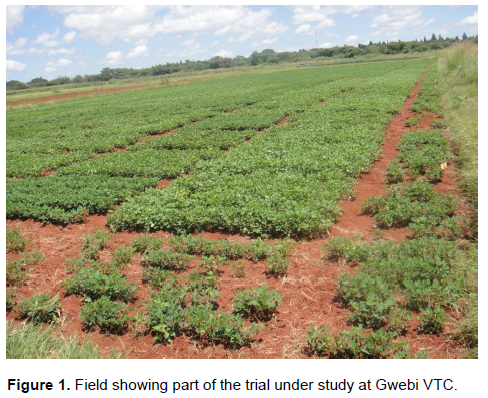 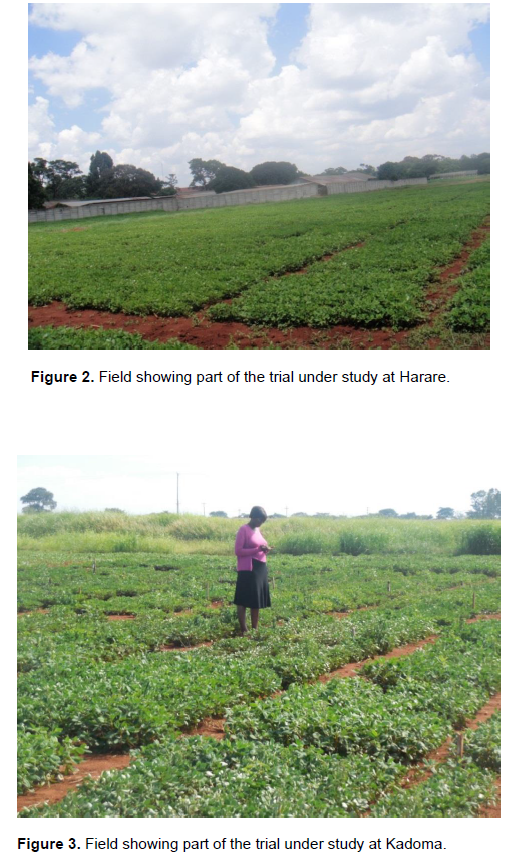 Records taken
Records that were taken include, days to flowering, days to maturity, diseases scores, insect pest scores, pod  size,  seed  size, shelling percentage and pod yield. For the sake of this study, only pod yield was considered for statistical analysis. Pod yield was recorded on the net plot basis. After drying and cleaning, the weights of the pods per plot were recorded and converted to t/ha using a formula.
Analysis of variance
General combined analysis of variance (ANOVA) for pod yield data was conducted using  GenStat 14th  Edition  software  to  determine the G, E and GEI effects. The effects of the genotypes, environments as well as their interaction were determined from ANOVA analysis. 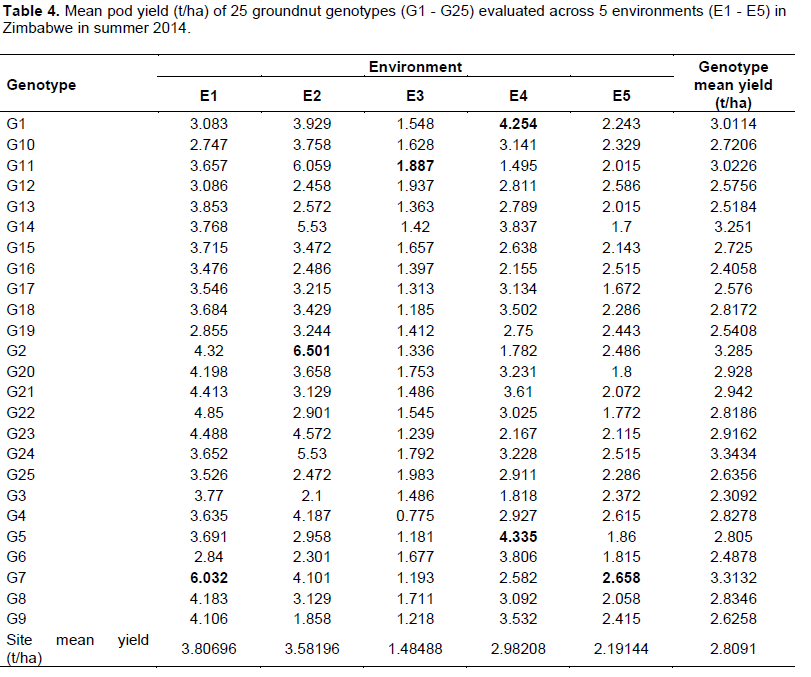 The implication crossover interaction to this study is that the selection of superior genotypes is not possible, since different genotypes were performing differently. As a result, researcher will then focus on two sets of genotypes to recommend for release: (i) Choose the genotypes that have wide adaptation, and (ii) Choose genotypes which are specifically adapted to high potential environments. These will then be identified when the data has been subjected to adaptability and stability analysis.

The results shows evidence that there was genotype x environment interaction in this study as well as significance of genotypic performance that was due to the environments. The presence of significant GxE interactions complicates the process of selecting only genotypes with higher performance (high yielding or superior genotypes) since the genotype were yielding differently in different environments (leading to changes in rank orders). For this reason, multi-environment trials are recommended. The results indicate that the environmental main effect influenced the performance of the groundnut genotypes more than the genotypic main effect and the interaction of genotype and the environment. The results indicate that there are some experimental genotypes that have great potential to be released and recommended for commercial production in all areas suitable for groundnut production. The following genotypes would be recommended for release and commercial production; G7 (9607/5/14 an experimental genotype, mean pod yield = 3.31 t/ha) and then G2, G14 and G11 (302A/6/2, 294/5/6 and 9607/5/22 experimental lines, mean pod yields = 3.29, 3.25 and 3.02t/ha respectively). Due to the negative impact of GEI on genotype selection, the researcher recommends that the data must be exposed to analysis of pod yield stability using on one multivariate or various uni-variate parameters to extract more information on the GEI and pod yield stability of groundnut genotypes in Zimbabwe.