Journal of
Cereals and Oilseeds 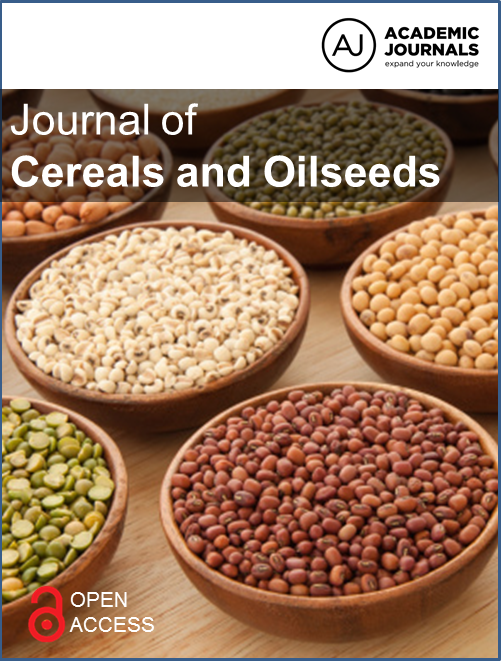 In order to study the morphological basis of corn yield under normal irrigation and drought stress condition, an experiment was carried out on basis of complete randomized block design with three replications and 28 new hybrids of corn; in addition 6 commercial hybrid (as control) under normal irrigation and drought stress condition in Khorasan Razavi Agricultural Research and Natural Resources Center, Mashhad, Iran on 2009. Genotypic and phenotypic correlation coefficients and path coefficients were estimated to determine the association and direct and indirect effects of different characters on total yield. Results of analysis of variance (ANOVA) showed that in both conditions there were significant differences between all hybrids for all traits. In normal irrigation condition KSC500 hybrid and in stress condition N-11 hybrid was better than others in grain yield trait. Under stress condition, number of kernels per row had the highest correlation with grain yield, while under normal irrigation ear diameter had the highest correlation with grain yield. According to this study, kernel No./ear is more closely and significantly related with total yield. This emphasized that selection based on the characters which enhance kernel number per ear will be more effective in improving yield under drought stress condition.