Rice is gaining much research attention owing to an astronomic increase in its consumption relative to lower domestic production in some countries in Africa. The increase in consumption of rice in Africa is related to rapid population growth, incessant urbanization, increased income, and favourable government pricing policies, easy and long storability of rice and ease of cooking. About 90% of the world rice output is produced in Asia (66% in India, Indonesia and China).  Most rice fields in the tropics require the application of nitrogen fertilizer for cost-effective yields (Tilman et al., 2002). Ammonium and amide forms of nitrogen are preferable to nitrate forms in the lowland rice fields because nitrate forms are prone to leaching and losses through denitrification in flooded rice fields. The use of Azolla is beneficial in increasing rice production because Azolla can supplement more than half of the nitrogen requirements of lowland rice crop. As an aquatic fern, Azolla fixes atmospheric nitrogen and makes available some of the fixed nitrogen to the planted rice. Azolla can excrete 3 to 4% of the total N fixed to the exterior solution and of the total N released; 15 to 30% was available to the first rice crop (Liu, 1985).
Rice field inoculated with Azolla before and after transplanting rice resulted in grain yields being increased by 54% over the control fields without Azolla. The complementary use of Azolla and N fertilizer for rice cultivation is receiving attention. Thus, incorporating 5 tons fresh Azolla/ha just before planting increased yields of rice by 44% over the control whilst a combination of 30 kg N/ha and 5 tons of Azolla/ha increased yields 86.4% (Singh and Singh, 1986). The application of 30 kg N/ha urea in combination with Azolla inoculated basally or with the Azolla intercropped gave an equal grain yield compared to 60 kg N/ha urea. Plant height, number of effective tillers, dry mass and nitrogen content of rice plants were increased with the use of Azolla and N-fertilizers and combinations (Bhuvaneshwari and Singh, 2015).  Azolla also prevents rise in flood water pH, reduce water temperature, curb NH3 volatilization and suppresses weeds and mosquito proliferation in wetland rice fields (Pabby et al., 2004). When intercropped or incorporated into paddy rice fields, Azolla mitigated the rapid loss of nitrogen from chemical fertilizer since the release of the nutrient is progressively slow making it a viable alternative source of nitrogen in lowland rice production (Lumpkin and Plucknett, 1985).
The applied Azolla increased both total and available nitrogen of the paddy soil. Methane emission was also reduced because Azolla improved the content of NO2- and NO3- in the floodwater and also of the soil. The NO2- and NO3- oxidized CH4 to CO2 (Mujiyo et al., 2016). Organic matter, potassium and the organic nitrogen contents of the soil significantly increased with the use of Azolla in rice production (Yadav et al., 2014). Both biochemical and biological properties of the field were improved by Azolla incorporation. Thus, the soil urease and phosphatase activities improved and there were increased cellulolytic and urea hydrolyzing activities in addition to significant increase in the population of heterotrophic bacteria due to Azolla application (Thanikachalam et al., 1984; Kannaiyan and Subramani, 1992). Azolla enhanced the soil biological health and optimized the use of organic, inorganic and biological inputs in an integrated manner (Yadav et al., 2014).
About two thirds of the total nitrogen that was in fresh Azolla was mineralized within 6 weeks and the nitrogen was made available to rice plants after the Azolla had been incorporated into the soil (Ito and Watanabe, 1984). However, nitrogen mineralization from dried Azolla is slower than fresh Azolla (Watanabe et al., 1977) when used to grow lowland rice. Dry Azolla has been used in feeding livestock and poultry (Giridhar and Rajendran, 2013). The full potential of Azolla as a biofertilizer is yet to be realized since much emphasis has been made on fresh Azolla than on dried Azolla. Thus, the potential use of fresh Azolla in combination with dried Azolla, the use of dry Azolla and inorganic fertilizer, the combined use of fresh Azolla, dry Azolla and inorganic N fertilizer have not been fully explored for lowland rice production. This study was carried out to elucidate the use of dried Azolla in increasing lowland rice production. The objective of the study was to examine the effectiveness of dry Azolla in influencing lowland rice growth in the Bumbi series (Calcic natraquert).

Bumbi series is a vertisols of the Accra plains. It lies in a valley with a slope of 0 to 2% and is made up of montmorillonite clay derived from amphibolite and/or hornblende schists with little or no stones in the surface or subsurface horizons. The Bumbi series is deep and very poorly drained thus swelling when wet and very hard and cracks when dry. The Bumbi series has been classified by Amatekpor and Dowuona (1995) as Calcic Natraquert under the USDA Soil Taxonomy System. The soil texture is silty clay loam. The physical and chemical characteristic of the soil is shown in Table 1. 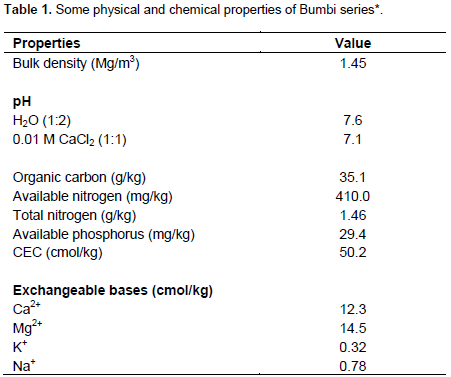 Statistical analysis
The data on plant height, tiller number, dry weight and Total N were subjected to analysis of variance using Genstat software, 9th edition. The significance of treatment means was tested at the 5% level of probability and the least significant difference (LSD) was used to separate the means.

The Bumbi series has a bulk density of 1.45 Mg/m3, clay content of 36%. Considering the bulk density, root penetration by most crops in the soil may be inhibited. The soil is slightly alkaline with pH of 7.6 in water and 7.1 in 0.01M CaCl2 (Table 1). The organic carbon content of 35.1 g C/kg could be the consequence of the long fallow period the field was subjected to and the accumulation of organic matter from the sedges growing on the field. Available P content of the soil was 29.4 mg/kg. The exchangeable Ca2+ and Mg2+ values were 12.3 cmolc/kg and 14 cmolc/kg whilst the Na+ (0.78 cmolc/kg) and K+ (0.32) are quite low. The high Ca2+ content of the Bumbi series is due to the presence of calcium carbonate concretions.  The height of rice plant increased for all treatments with time (Table 2). In the first week of sampling, the least plant height was recorded by the treatment AS and the highest height by the control, whilst the different treatments (FA, DA, FA + DA, AS + DA) attained almost the same heights with no significance difference among the various heights of the various treatments.

For the subsequent weeks, that is, week 2 through to week 4, there was no significant difference among treatments for a particular week. The rice variety IR 841 has been bred to medium height to avoid lodging. Tiller number increased with time and by the fourth week of sampling, that is, 42 DAT, the highest tiller number was produced by the AS > AS + DA > DA + FA > DA > FA > C (Table 2). The application of ammonium sulphate produced more tillers than any other treatment and the least tiller number was produced by the control. Tiller number ranged from 11 to 30 by the fourth week of sampling. Ammonia sulphate being an inorganic fertilizer released the nitrogen early enough for the plant to use for tiller production as compared to the N released from Azolla which is organic N that had to be mineralized to release inorganic forms of N for rice plant to use.  The highest dry weight was observed for the AS + DA treatment followed by the AS treatment and there was no significant difference between them (Table 3). The treatment AS + DA was significantly different from all the other treatments. Even though the dry weight of DA + FA was higher than the individual dry weights of DA and FA, there was no significant difference between dry weight of DA + FA, DA and FA.

This shows that the combined use of DA and FA has the potential to increase rice dry matter yield more than the use of dry Azolla alone and the use of fresh Azolla alone in growing lowland rice. The control had the lowest dry weight. Correlation of 0.879 and 0.853 existed between the dry weight of the rice plant and the tiller number at 35 DAT and 42 DAT implying that tiller number contributed immensely to the dry matter yield of the rice plant in this study.  The AS + DA treatment had the highest total N and this was significantly different from all other treatments (Table 3). The AS treatment had the next highest total N and it was significantly different from DA + FA treatment. The individual treatments of DA and FA had lower total N compared to the combined treatment of DA + FA. Similarly, the treatment AS + DA had higher total N yield than the individual treatments of AS and DA. Combining DA with AS, ensures prolonged N availablility for rice plant use.
This is because AS releases N at the initial stage of rice plant growth and at a later stage, DA mineralizes and releases N making that combination a superior treatment to use than DA alone. Similarly, the DA + FA treatment performed better than the DA and FA treatments because the rice plant had available N for the growth of rice over a longer span of time. There was no significant difference in the treatments for total N of DA and DA + FA. The lower total N recorded for the treatment FA as compared to the treatment DA is difficult to explain because one would have expected higher total N yield from the fresh Azolla than the dried Azolla since dried Azolla mineralizes and releases N more slowly (Ito and Watanabe, 1984) than fresh Azolla and that can retard the vegetative growth of rice plant.

The application of dried Azolla and ammonium sulphate performed better in all the parameters examined than the other treatments. Thus, dry Azolla can be used to supplement the nitrogen fertilizer supplement of lowland rice. Also, the full potential of Azolla can be realized when both fresh and dried forms of Azolla are considered for rice and other crop production.

The authors have not declared any conflict of interests