Simple sequence repeat (SSR) markers (36 microsatellite pairs) were used to assess genetic diversity among sixteen rice (Oriza sativa L.) cultivars from Iran, four from Uzbekistan, and one from Afghanistan, and to compare this diversity with that of three control cultivars including Nipponbare, Jasmine 85 and Basmati 370. Among the 36 microsatellite pairs, 31 produced polymorphisms ranging from 1 to 7 alleles (average = 3.72 per microsatellite). There were 134 alleles detected using all the SSR primers, 103 of which (76.9%) showed polymorphisms, while 31 did not. The genetic similarity coefficient among the 24 rice cultivars was 0.601. The genetic diversity revealed by this survey will be useful to designate the most appropriate parental cv. to initiate a breeding program aimed at developing new rice varieties with traits adapted for Middle Eastern agriculture. 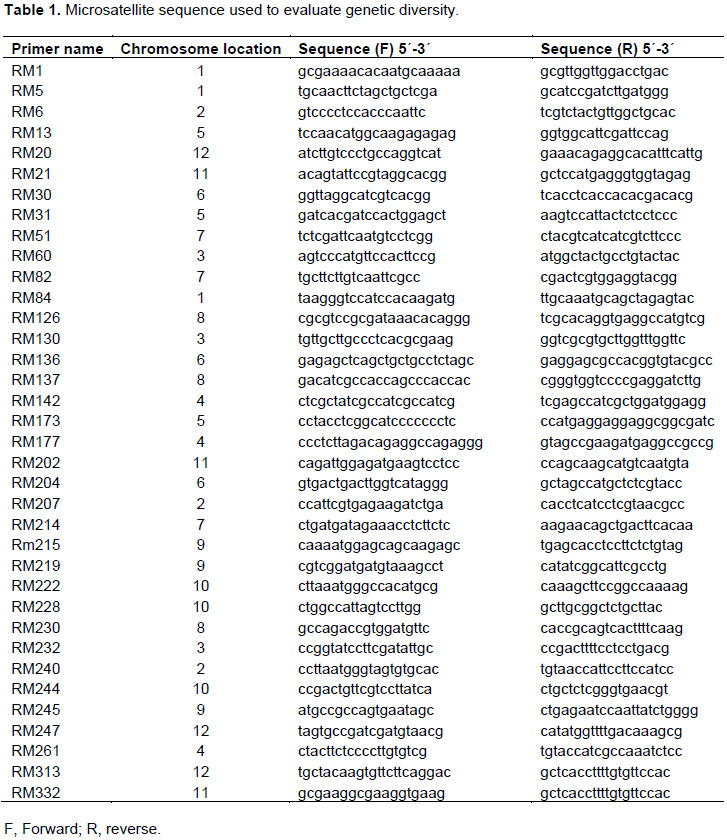 PCR analysis
PCR was performed in a 12.5 μL reaction mixture containing 7.7 μL double distilled water, 0.5 unit Taq DNA polymerase, 10 ng genomic DNA, 1.25 μL 10X buffer, 1 μL 50 mM MgCl2, 1 μL of 5 mM DNTPs, 5 pM of each primer. PCR conditions were as follows: denaturation at 94°C for 5 min followed by 35 cycles (94°C for 1 min, 55°C for 1 min, 72°C for 2 min), and final elongation at 72°C for 5 min. PCR products were separated by electrophoresis on a 1.5% agarose gel. One Kb mass RullerTM was used to estimate the fragment sizes. The gel was stained with ethidium bromide for 20 min, and then photographed under UV light.
Data analysis
In this study, microsatellite band fragments were analyzed by the binary procedure. The presence and absence of SSR amplified bands characteristic of each genotype were scored 1 for presence and 0 for absence of the band. The polymorphism information content (PIC) value was calculated for each microsatellite locus using the following formula (Nei, 1970):
PIC = 1 - ∑ xi2
where xi is the frequency of i allele. Genetic similarity (GS) was calculated using this formula (Nei and Li. 1979):
GSij = 2Nij / Ni + Nj
Where Nij is the number of bands present in both genotypes i and j, Ni is the number of bonds present in genotype i, and Nj is the number of bonds present in genotype j. Microsatellite markers were clustered using the unweighted pair group method (UPGMA) with Statistical software.

SSR analysis
Allele variation of SSR markers was determined among the 24 rice cvs; 31 polymorphic bands, which ranged from 1 to 7 alleles (average = 3.72) per microsatellite, were detected by the 36 microsatellite marker pairs. These SSRs detected a total of 134 alleles, of which 103 (76.9%) showed polymorphisms, while 31 alleles (23.1%) did not (Table 2). 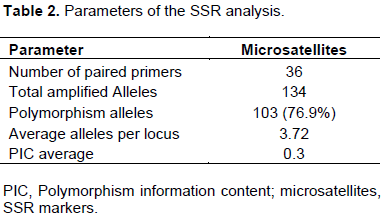 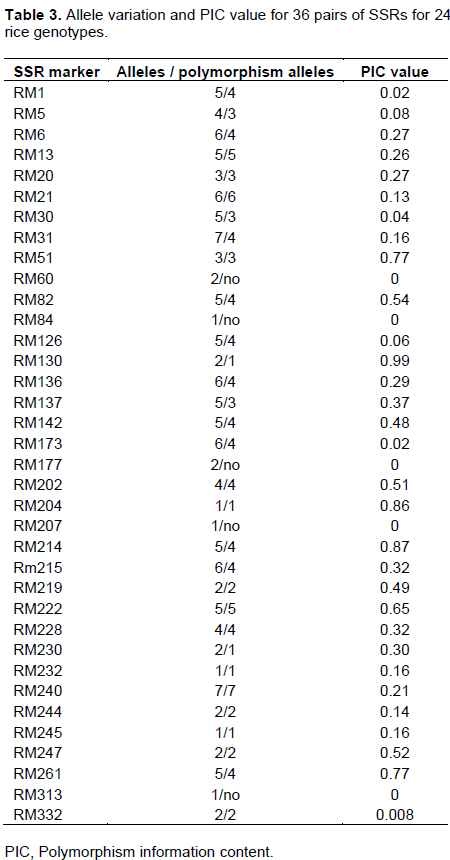 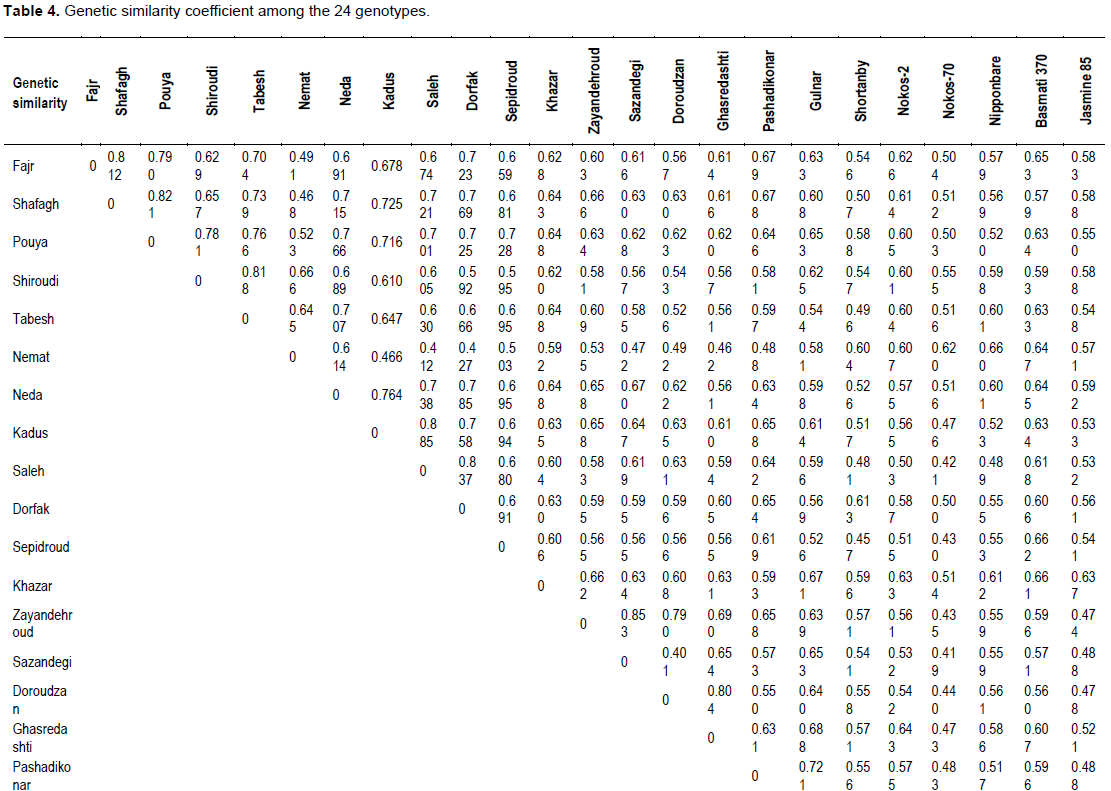 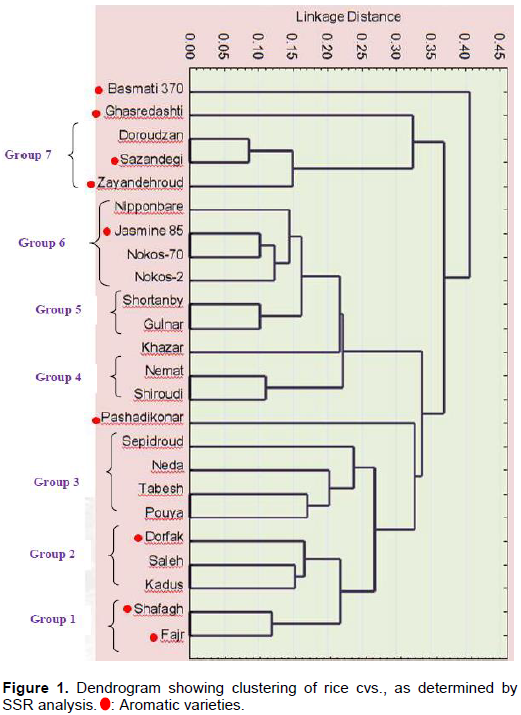 Many previous studies have shown that both morphological and SSR markers are useful for analyzing genetic diversity in rice and other crops. Single-nucleotide polymorphisms have become the genetic markers of choice in various genetic, ecological, and evolutionary studies (Tang et al., 2016). In the present study, SSR markers were used to detect genetic variation among 24 rice genotypes;  in  a  separate  analysis  (data not shown here), morphological features were combined with the SSR results, and it was found that there was general agreement between the two sets of data with respect to pair-wise genetic distances among the rice cvs.
In cases of disagreement between the datasets, greater significance was attached to the SSR marker analysis. There are several reasons for this: (1) morphological features are phenotypes, whereas SSRs are genotypes; morphological similarities may obscure genetic differences. (2) Many morphology  traits are controlled by multiple genes; hence a morphological variation alone does not indicate the number of genes involved, or the effects of pleiotropy, epitasis and the environment. (3) SSRs are  distributed  across  the  entire genome, whereas morphological features are lesscomprehensive. (4) SSRs are more easily scorable than most morphological features, (5) SSR detection is highly reproducible and can reveal intraspecific homology. (6) The abundance of SSRs enhances the likelihood of linkage to specific agronomic traits; for instance, SSR results revealed large genetic distances between certain landraces of rice, thus evaluation of genetic diversity and genetic structure in crops has important implications for plant breeding programs and the conservation of genetic resources (Ren et al., 2013). The result of cluster analysis revealed that there was to significant correlation between the aromatic feature and genetic similarity.
DNA polymorphisms have proven to be powerful tools for genotyping, and for estimating genetic diversity. Among molecular markers, SSRs have been used to indicate genetic diversity of crop germplasms and have been widely applied in the genetic diversity analysis (Salgotra et al. 2015). The importance of plant genetic diversity is now being recognized as a specific area since exploding population with urbanization and decreasing cultivable lands are the critical factors contributing to food insecurity in developing world (Govindaraj et al., 2015). SSR-based analysis of genetic diversity can be used to identify duplicate germplasms in morphological similar accessions.
This study was set in the context of previously reported crop breeding programs. Genetic diversity is the main source of variability in any crop improvement program and it serves as a reservoir for identifying superior alleles controlling key agronomic and quality traits through allele mining association mapping (Nachimuthu et al., 2015). The microsatellite DNA marker has been the most widely used, due to its easy application by simple PCR, followed by a denaturing gel electrophoresis for allele size determination, and to the high degree of information provided by its large number of alleles per locus (Mishra et al., 2014). The goal of our work was to identify genetic variation within a rice germplasm collection, so that desirable parents could be chosen for rice breeding programs in Iran. The relatively low genetic similarity (average = 0.601) that we found indicated high genetic diversity in our collection; thus these rice cvs. are a good source from which to choose genetically dissimilar parents to be cross-bred in a program aimed at improving commercial Iranian rice. For example, cvs. Khazar and Ghasredashti, which are genetically far apart, might be favorable parental materials for making new varieties. It is worth mentioning that cross hybridization is pivotal between genotypes of different clusters to improve desirable commercial varieties. Genome level profiling of germplasm collections in crop species is essential to identify accessions for their efficient use in crop improvement programs (Choudhury et al., 2014). Kioko et al. 0(2015) mentioned that the assessment of genetic diversity is crucial in germplasm characterization. Toward this end, the present results emphasize the importance of Iranian rice germplasm collection, conservation and maintenance. The focus should be on introduction of more diverse cultivated rice and any other heterotic materials that can be used for hybridization. As Iranian rice breeding programs are mobilized, it should be emphasized that each succeeding breeding generation should be monitored by molecular analysis; this will require the use of more primer combinations and introduction of additional molecular markers.