Sugarcane (Saccharum spp.) is an important economic crop in the tropics and sub-tropics due to its high sucrose content and bioenergy potential. Sugarcane in Ethiopia so far the industry does not have its own breeding program it has always been dependent on importing sugarcane varieties and locally evaluating their performance on yield and diseases.

According to Sundara (2000), in order to enhance productivity and profitability of commercial scale sugarcane cultivation, adoption of high yielding varieties and improved production packages are highly demanding. There are number of reasons for lower cane yield and one of those is the planting of low yielding varieties. Therefore, it is  need  of  the  time  to  introduce new high yielding varieties with good ratoon ability in the country (Chattha and Ehsanullah, 2003). Variety plays a key role in both increasing and decreasing per unit area sugar yield, while use of unapproved, inferior quality cane varieties affect sugarcane production negatively as situation prevails today (Mian, 2006). The solution of low cane yield and sugar recovery problem lies in the planting of improved cane varieties (Chattha et al., 2006). Varieties differ not only in their yield of cane but also in their juice quality. They also differ in the length of time required to reach maturity. There are also very marked responses to the environment, and even different ecological zones within a country. It is for this reason that, if the best selection is to be made, the final stages in a varietal selection program must incorporate trials in a country that must be representative of all the main ecological zones (James, 2004). Important considerations in choosing an appropriate variety are: cane yield, juice quality, age group, suitability to the growing condition (that is, soil type, irrigation level, season etc.), ratooning potential, and resistance to disease and pest and adverse growing condition (Sundara, 2000).

Efforts are being made to increase cane production by introducing high yielding varieties and adoption of improved crop production techniques (Gill, 1999). Success of variety depends upon its adaptability to agro-climatic conditions of the area. Selection of a proper variety to be sown in a particular agro-ecological zone is a primary requisite to explore its yield and sugar recovery potential. Ratoons are important for overall profitability of sugarcane cultivation as they save about 30% in the operational cost, mainly that of seed and reduced expenses for soil management (Sundara et al., 1992). The inherent potential of a variety to give better yields in plant and ratoon crops is of paramount importance for sustaining high productivity. Acceptance of a variety by the farmers now depends very much on its ratooning potential. Thus, sugarcane varieties, which show good performance in plant and ratoon crops, should be promoted for commercial cultivation. In Ethiopia, even if the country has a fertile soil and favorable environmental condition for sugarcane production its average cane yield is limited to about 104 ton/ha/year (Sugar Corporation, 2011) this could be attributed by many factors, of which lack of improved varieties play central role. For this purpose, the variety improvement strategy should guarantee proper substitution of declining or poor performing commercial varieties from its sugarcane germplasm pool following proper field evaluation. Therefore, the government has developed a strategy to import divers improved sugarcane varieties from around similar ecological locations of the glob to secure the upcoming huge development and expansion in sugar industry.

Description of the study area

All the varieties considered in this study were newly introduction to Finchaa Sugar Estate and were selected based on their performance on variety adaptability trials conducted at Wonji - Shoa and/or Metahara Sugar Estates (Aregaw, 1997, 2000). The evaluation was made based on plant cane and two ratoon crops on the two major soil types of Finchaa (Vertisol and Luvisol). The experiment was laid out in a Randomized Complete Block Design with three replications. Each experimental plot had a size of 29.0 m2 (four furrows of 5 m length and 1.45 m space between furrows). For data collection and observation, only the two middle rows were considered. The distance between plots and within replication was 1.5 and 2.9 m, respectively.

During the course of the experiment sprout percent, tiller count, number of millable canes and growth (height) measurement were taken. Moreover cane yield, cane thickness (girth), number of internodes, percent sucrose and estimated sugar yield were measured at harvest by taking 10 random samples from each plot. Except for the varieties used as treatments in this trial other inputs and field operations on the site were made following conventional practices of the Estate.

Finally, data were subjected to General Linear Models Procedure (GLM) using SAS software statistical package (SAS, 2002) following a procedure appropriate to the design of the experiment (Gomez and Gomez, 1984). The treatment means that were significantly different at 5% levels of significance were separated using the Duncan Multiple Rang Test (DMRT). 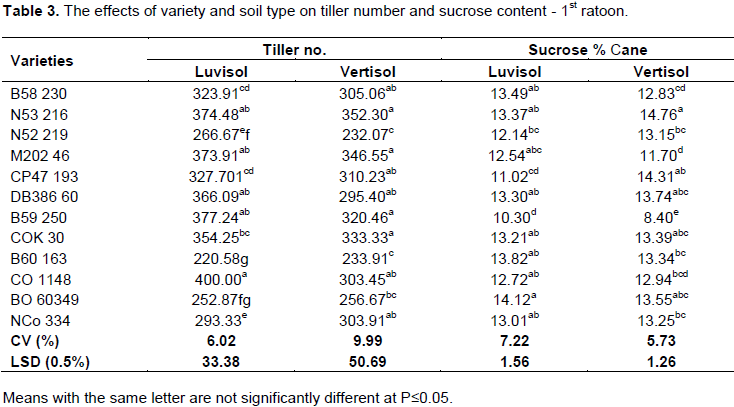 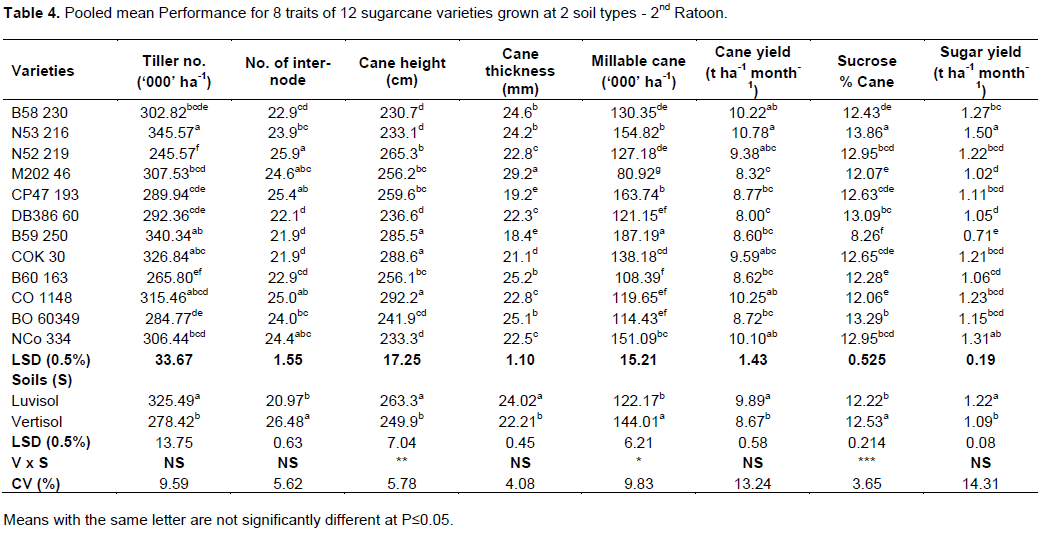 This reduction of stalk population (mortality of cane) could be attributed to the factors which induce competition for light, moisture and nutrient; and the survival of the tillers after the competition is a character of a variety. Thus, in the present finding the variation in survival and mortality rate could be probably attributed to the differences in the genetic makeup of the varieties (Worku and Chinawong, 2006).

Analysis of variance of number of inter-nodes, cane height, and cane thickness resulted in significant main effects of varieties and soil types on all the traits for all the three cuttings (plant cane, first and second ratoon). However, their interaction was not significant on any of the traits except on the cane height of the second ratoon (Appendix Table 1).

Regarding cane thickness, significantly thicker cane was obtained from variety M202 46, of all the cuttings (PC, 1st and 2nd ratoon) followed by B60 163, BO60 349, and B58 230.  Taller plants were produced by variety CO 1148 in all the three cuttings followed by variety COK 30. The plant height and cane girth are the major contributing factors for high cane yield (Rehman et al., 1992). Similarly, in this work, the variety M202 46 and CO 1148, which recorded the highest in cane girth and plant height, respectively were grouped in the first category for cane yield ha-1 month-1 (Table 1). 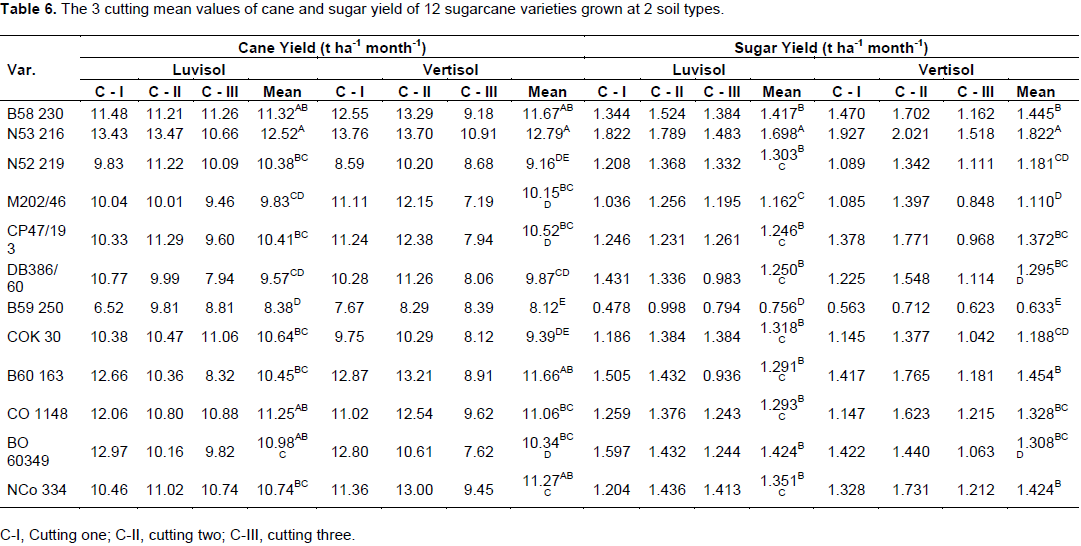 Result clearly showed that variety N53 216 and B58 230 produced higher mean cane and sugar yields (ton ha-1 month-1) than the check variety NCo 334 in both Vertisol and Luvisol fields of Finchaa.