Antibiotic susceptibility of bacteria isolates from ward environment of a hospital in Tema, Ghana 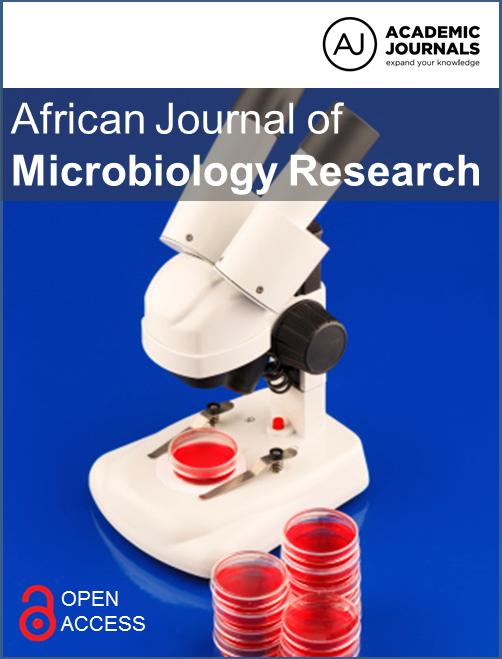 Community and hospital-acquired antimicrobial resistance is on the increase worldwide and threatens the ability to treat patients effectively. This can result in high levels of morbidity and mortality from microbial infections. Susceptibility patterns help track microbial resistance potentials in order to enhance antibiotic prescription and use. The susceptibility patterns of Staphylococcus aureus and Salmonella typhi from the wards of a major hospital in the Tema Metropolis of the Greater Accra region of Ghana were studied. Fifty-seven S. aureus and 12 S. typhi isolates were confirmed from 150 samples collected from the various parts of the hospital wards. The isolates were evaluated for their susceptibility/resistance against five antibiotics namely: Cefuroxime, gentamicin, tetracycline, ciprofloxacin, and erythromycin using the Kirby-Bauer disc diffusion method. Results revealed that hospital door handles had the highest number of microbes as compared to other sites. Of the S. typhi isolates, 66.67% were resistant to cefuroxime but completely susceptible to gentamicin. Also, 75.44% of S. aureus isolates were resistant to cefuroxime but highly susceptible to ciprofloxacin, gentamicin and tetracycline. The results indicate that S. aureus and S. typhi are gradually developing resistance to cefuroxime which is currently a major antibiotic in the health delivery system of Ghana.

One of the major problems in human health is the emergence and spread of antibiotic resistance which has resulted in the limited success of antibiotics in the treatment and prevention of infectious diseases (Dagnachew et al., 2014). Although antimicrobial resistance is a problem to disease pathology, one of its major outcomes is the problem of limited therapeutic options (Chatterjee et al., 2016). Community and hospital-acquired antimicrobial-resistant strains of bacteria  especially Gram-negative bacteria such as Klebsiella pneumonia are on the increase worldwide (Caneiras et al., 2019). This problem, threatens the effective treatment of patients and therefore results in the need for emphasizing new treatment alternatives, infection control, continuous surveillance and appropriate antimicrobial prescription (WHO, 2020).

In Ghana, Salmonella typhi infection is ranked amongst the top 20 causes of outpatient morbidity and 1.2% of all hospital admissions (Fusheini and Gyawu, 2020). Staphylococcus aureus is also one of the most common causes of infections reported in hospitals in Ghana. Although a common pathogen of economic importance, there are very limited surveillance data on the pathogen in Ghana (Donkor et al., 2018).

Resistance of bacterial pathogens to antibiotics has seen an increase in prevalence and spread over the years largely due to inappropriate use of antibiotics both in health facilities and within the community (Yevutsey et al., 2017). Antimicrobial resistance is a major public health concern in Ghana as it has increasingly become difficult to therapeutically manage infections caused by resistant strains of bacteria and thus could spread rapidly within the population into an epidemic (Yevutsey et al., 2017). Several types of research have indicated a high prevalence of resistance to some commonly used antibiotics such as tetracycline, ampicillin, chloramphenicol, and co-trimoxazole (Asante et al., 2017). Penicillin which was hitherto commonly used is gradually losing its effectiveness against Streptococcus pneumoniae and Neisseria meningitidis in Ghana (Dayie et al., 2013; Duplesis et al., 2016).

Though antibiotic therapy is highly utilized in Ghana, there is the lack of information on the resistance and susceptibility of bacterial pathogens to antibiotics due to the lack of surveillance in the various healthcare facilities (Labi et al., 2018). Hospital environments and high-touch surfaces could be contaminated with microorganisms (Casini et al., 2019) and could result in their spread to healthcare personnel and patients if not properly disinfected. This problem could result in ineffective antimicrobial therapy (Yevutsey et al., 2017). The Tema Metropolis is located in the Southeastern coast of Ghana. It is one of the two cities in the Greater Accra region of Ghana. The population of Tema Metropolis, according to the 2010 Population and Housing Census, is 292,773 representing 7.3% of the region’s total population. It has several private and well-equipped public health facilities (Ghana Statistical Service Report, 2010).

This study was aimed at determining the prevalence and antibiotic profiles of S. typhi and S. aureus isolated from ward environment of a hospital in the Tema Metropolis of the Greater Accra region of Ghana. S. aureus and S. typhi are important bacteria in the health delivery system of Ghana. They are mostly transferred through food, human to human, and can cause nosocomial infections (Adzitey et al., 2017; Fusheini and Gyawu, 2020). Hospital personnel, patients, and visitors are all prone to being exposed to these microorganisms due to their presence in the hospital environment.

Collection of samples at the hospital wards

A swab of sample sites was taken using a sterile cotton bud dipped into sterile distilled water. Samples were taken from the beds, tables, doors, and the floors of various wards, (male, children, and female wards) of the hospital. A total of 150 samples were collected and coded appropriately, placed in a sterile swab bag, and transported immediately to the Central University Microbiology Laboratory. Collected samples were enriched in peptone broth and incubated at a temperature of 37°C for 48 h (Agoba et al., 2017) with slight modifications.

The isolation of S. aureus was done by taking a loopful of the enrichment culture and streaking onto the surface of prepared mannitol salt agar. This was incubated at 37°C for 24 h. Pathogenic S. aureus were identified as bright-yellow colonies. The colonies were sub cultured on nutrient agar and incubated again at 37°C for further tests. Further biochemical tests namely; gram staining, MRVP, catalase, citrate utilization test and Gelatin hydrolysis test were used in identifying and characterizing the isolates. All microbial culture media used were purchased from Oxoid, UK.

Isolation of S. typhi was done according to the method described by Hassan et al. (2016) and the protocol of the WHO global foodborne infection network manual 2016 with slight modifications.  A loopful sample of the pre-enriched isolates was streaked onto Bismuth Sulphite agar (BSA), Salmonella-Shigella agar (SSA), and Xylose Lysine Deoxycholate agar (XLD) incubated at 37°C for 18 to 24 h. Shiny black rabbit-eyed colonies on BSA, transparent black-centered red colonies on XLD agar and colourless black-centered colonies on SSA were observed and suspected to be Salmonella spp. The colonies were isolated onto nutrient agar and further incubated at 37°C for 24 h. Confirmation of species was done via biochemical tests which include; inoculation and incubation on TSI agar, Motility -Indol -Tests, Citrate utilization test. O and H -antigen serotyping was also conducted.  All microbial culture media used were purchased from Oxoid, UK.

Determination of the antibiotic susceptibility profile of the bacterial isolates

The isolates obtained were tested against five antibiotics with specific concentrations namely; ciprofloxacin (CIP) 5 µg, erythromycin (E) 15 µg, cefuroxime (CXM) 30 µg, gentamicin (CN) 10 µg, tetracycline (TE) 30 µg. The bacterial isolate in the Muller- Hinton broth diluted with sterile distilled water to 0.5 MacFarland was inoculated aseptically onto prepared Muller- Hinton agar plates with the aid of sterile cotton bud. The antimicrobial discs (Oxoid, UK), with the aid of the multidisc dispenser, were then placed on the inoculated Muller- Hinton agar plates. The agar plates were then incubated at 37°C for 24 h. After 24 h of incubation, the zones of microbial growth inhibition were measured in millimeters with a meter rule, recorded and interpreted according  to  the Clinical  and Laboratory Standard Institute (CLSI) guideline 2014 (Table 1). 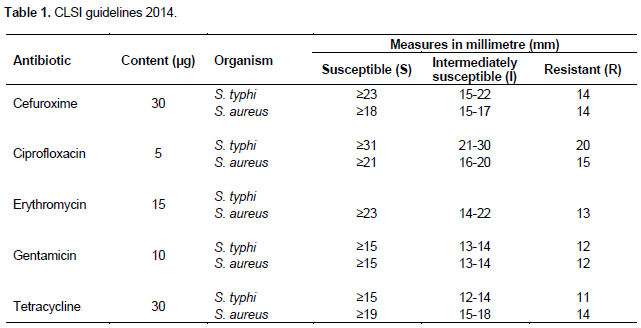 Prevalence of S. aureus and S. typhi at wards

Prevalence of S. aureus and S. typhi from sites of collection within wards

The S. aureus isolates obtained were observed to be highly sensitive to gentamicin (91.23%), ciprofloxacin (100%), and tetracycline (100%). High resistance was observed with cefuroxime (75.44%). The antibiotic susceptibility profile of the S. typhi isolates obtained revealed high sensitivity to ciprofloxacin (91.66%), tetracycline (75%) and gentamicin (100%) but high resistance to cefuroxime (66.67%) as indicated in Table 3.

The results from the study indicated that the majority of the isolates obtained were S. aureus than S. typhi. This could be due to the fact that S. aureus is a common microbe that is part of the normal microflora of the skinand mucous membranes unlike S. typhi which is mostly found in the gut (Tong et al., 2015). Furthermore, S. aureus was more prevalent in the female ward than in all the other wards. This is similar to the findings of Dilnessa and Bitew (2016), who reported that S. aureus strains are higher in female wards than in male wards revealing a percentage of 53% in females versus 47% in males. The door handles of the hospital had the highest prevalence of microbes as indicated in this study. Studies conducted by Odigie et al. (2017) have also confirmed a high level of microbial contaminations on door handles and this is no exception. The major concern, in this case, is the possibility and frequency of transfer of resistant strains amongst hospital staff, patients, and visitors.

All the S. aureus isolates obtained in this study showed some level of resistance to ciprofloxacin, tetracycline, erythromycin and cefuroxime with the exception of gentamicin. This is similar to a study conducted by Onwubiko and Sadiq (2011) in Nigeria where almost all the S. aureus isolates  (92.4%) were susceptible to gentamicin and had a similar resistance rate to erythromycin (35.8%) (Figure 2). Complete susceptibility to gentamicin could largely be due to the fact that gentamicin is only used by the parenteral route and therefore is not widely abused and not readily available unlike the oral antibiotics. This makes it less exposed to the bacterial pathogens hence the development of resistance is slowed. Furthermore, gentamicin is an aminoglycoside and hence produces unwanted side effects such as ototoxicity which also limits its use by physicians, especially in children.

All the S. typhi isolates obtained in this study showed high susceptibility to ciprofloxacin, gentamicin, and tetracycline. There was however, high resistance to cefuroxime (66.77%). Ciprofloxacin has also been found to be a highly effective therapy for infections due to multi-drug resistant S. typhi as well as Neisseria gonorrhoeae in some countries (Melendez et al., 2019). A similar result was again obtained in a study in Bangladesh where S. typhi isolates were highly  susceptible to ciprofloxacin(Mannan et al., 2014). Tetracycline on the other hand, to which the bacteria were most sensitive is an old drug and is not been widely used in recent times. Consequently, the bacteria might have developed low resistance to it due to the routine use of newly developed antibiotics which probably eliminates resistance against older antibiotics.  There is an urgent need for surveillance on antimicrobial resistance to the commonly used antibiotics to determine their effectiveness and to improve treatment outcomes. Disinfection practices should be heightened to decrease the contamination of the ward’s environment with resistant strains of bacteria. 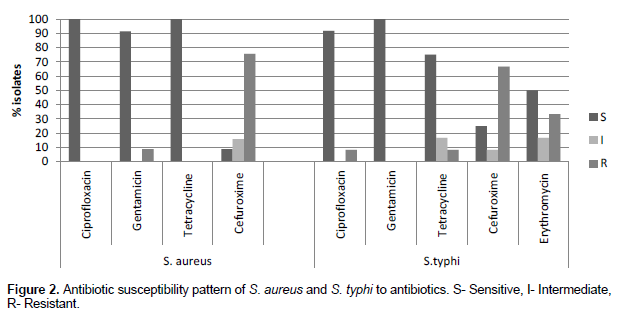 The study has revealed the presence of antibiotic-resistant strains of S. aureus and S. typhi in various parts of the hospital and the potential of easy transfer to patients and workers. This study therefore, indicates the importance of monitoring the usage of antibiotics in human medicine and also the need to reduce the empirical treatment of infections