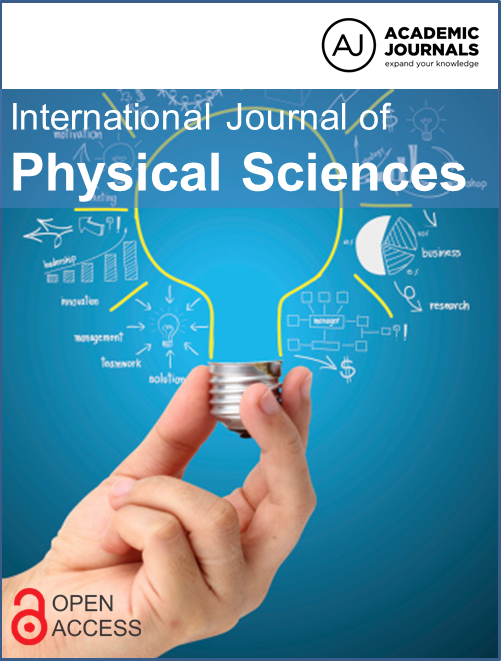 This paper presents the performance analysis of a 23 MWp photovoltaic solar power plant installed in Diass, Senegal. The solar photovoltaic power plant is composed of 85608 polycrystalline PV modules and 8 transformer stations (TS). Each TS consists of 4 inverters, several DC BOX and 2 transformers. The environmental and performance data of the plant used in this work were recorded throughout the year 2020. The performance parameters evaluated in this work are array yield, reference yield, final yield, array capture losses, system losses, performance ratio and capacity factor. The results of this study have been compared to other work carried out around the world. The results show that the performance depends on the climatic conditions of the on-site installation and the technologies used.

Clean or renewable energy refers to all forms of energy production from inexhaustible sources available on a human timescale. Renewable energies have a low impact on the environment which contribute to fight the greenhouse effect and global warming.

Global consumption and electricity production by renewable energy reached 19.3 and 24.5%, respectively between 2015 and 2016 (Global Overview, 2017). In 2019 more than 200GW of electrical power has been installed in  the  world. Most of them come from  the solar photovoltaic installations which has a great success around the world (REN21, 2020).

Among the different types of renewable energies, photovoltaic (PV) solar energy is the most widely applied energy in human life and industrial field (Lu et al., 2020). In terms of exploitation, solar panels need to be installed to the outdoor conditions which contribute to the degradation of the PV modules performances. The performance of a grid connected PV system depends more on cell technologies,  installation  configuration  and operating conditions (maintenance) than on meteorological parameters (Attari et al., 2016). The performance evaluation needs to monitor the production and operation of the PV power plant during its runtime (Elhadj Sidi et al., 2016). Over the years, many studies analyzed the performance of photovoltaic installations around the world.

In Brazil, the performance of a 2.2 kWp PV system installed at the State University of Ceara Fortaleza was monitored from June 2013 to May 2014. The annual energy yield, plant yield, final yield, annual average daily plant yield, system losses, system and inverter yields, PR and capacity factor were calculated. The results that they found show the good potential of producing electricity through photovoltaic solar energy in the state of Ceará – Brazil (de Lima et al., 2017). Nouar (2020) calculated the final yield, reference yield, system efficiency, performance ratio and total losses of a 20 MWp grid-connected PV system installed in a harsh environment in southern Algeria for a period of one year. The results obtained show that the installation of photovoltaic stations gives good results encouraging investments in this region (Nouar, 2020). Mpholo et al. (2015) monitored the performance of a first newly installed PV solar farm at the Moshoeshoe I International Airport in Lesotho with a capacity of 281 kWp, the result of this study shows that the area is suitable for grid-connected PV systems. The analysis period covers both hot summer and cold winter (Mpholo et al., 2015). In Italy, Congedo et al. (2013) analyzed the performance of a 960 kWp PV system composed of silicon monocrystalline PV modules over an eight-month period. The final energy yield, system efficiency, performance ratio and temperature losses of the PV cells were calculated. The analysis of the performance in this study is according to results reported in literature for PV system located in the Mediterranean (Congedo et al., 2013). 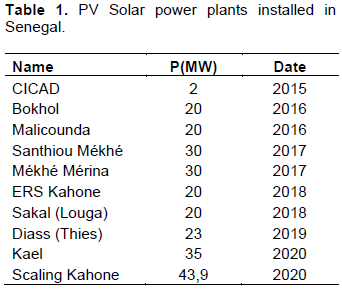 The main objective of this paper is to analyze the performance of a 23 MWp solar PV system in polycrystalline grid-connected technologies. The study covers the period from January to December 2020.

The Diass photovoltaic solar power plant is located at 40 km southeast of Dakar, Senegal, on latitude 14.38°N and longitude 17.05°W, and 40 m above sea level.

The Diass PV power plant consists of 85608 polycrystalline modules (model: Q. POWER-G5 270) inclined at an angle of 15°, 32 inverters (ConextTM Core XC), 16 transformers. The system is installed on an area of 400000 m2 and divided into two sections: Diass one with 15 MWp and Diass two with 8 MWp. The detailed information of Diass plant is shown in Table 2. The first section of the Diass power plant has 55584 modules, five transformers stations (TS), each TS is composed of four inverters and two transformers. The second unit of the power plant consists of 30024 modules, three TS, twelve inverters and six transformers. The simplified block diagram of the PV system is given by Figure 1. The PV plant is equipped with a monitoring system which continuously and instantaneously measures the inverter data, system status and weather data. The information collected is stored and sent to an IP network. All data is stored in intervals of 5 min. The characteristics of the PV modules, transformers and invertesr are shown in Tables 3, 4 and 5, respectively. 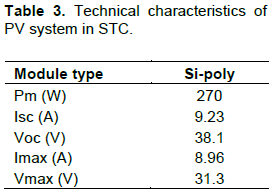 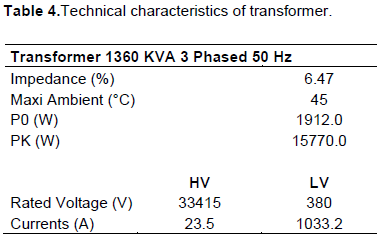 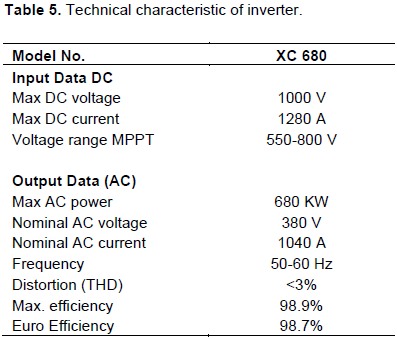 To analyze the impact of the environmental parameters on the PV system production and evaluate the seasonal and monthly performance, one year of data was recorded from January to December, 2020, then the calculation was made using Matlab.

The performance parameters evaluated in this study are array yield, reference yield, final yield, array capture losses, system losses, performance ratio and capacity factor. The results of this study were compared to other studies carried out worldwide. 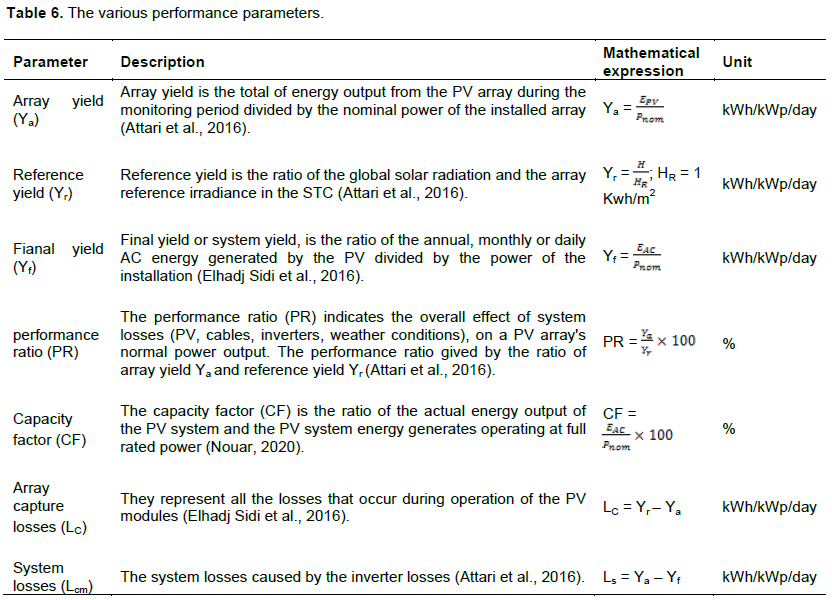 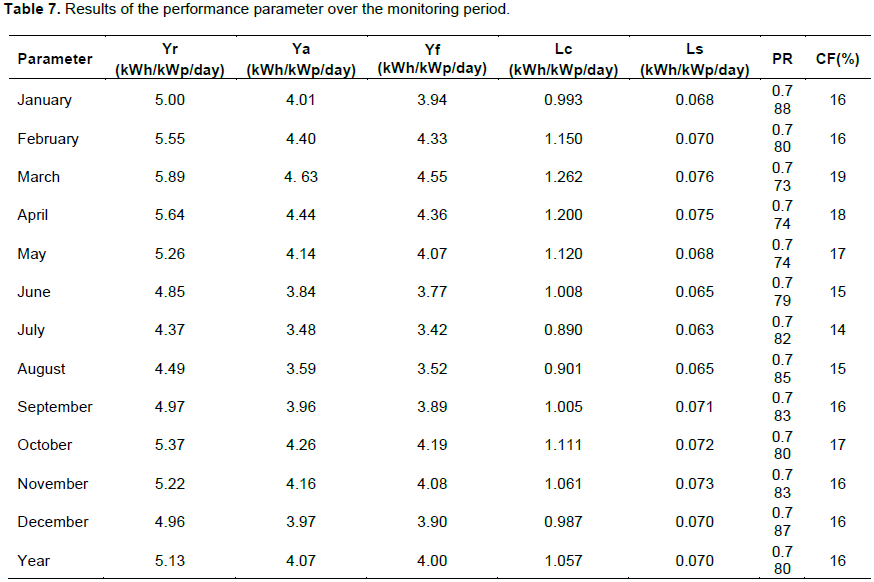 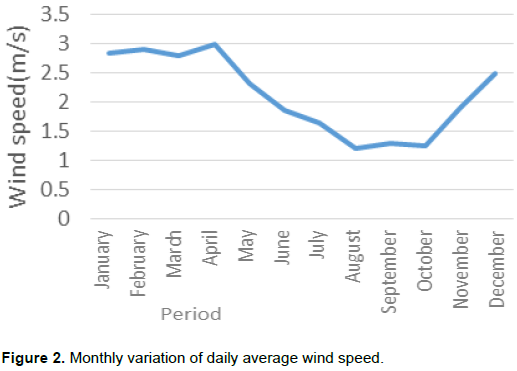 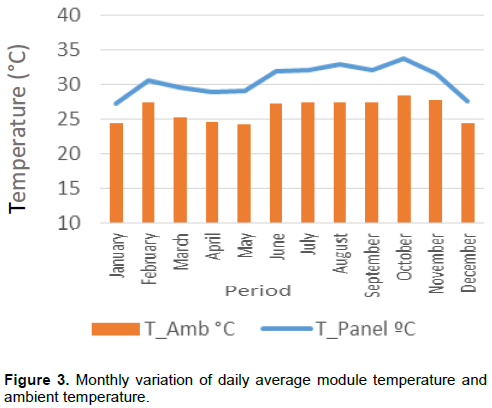 Figure 4 shows the monthly variation of daily average insolation and the total monthly energy production of the PV modules. Insolation variations range from a minimum of 151,332 kWh/m2 in July to a maximum of 219,522 kWh/m2 in March. However, the monthly variation in the sum of the energy produced follows the same trend as the irradiation and reaches a maximum of 3299.287 MWh in March and a minimum of 2480.723 MWh  in  July.  The months of June, July and August are characterized by a decrease in insolation and energy production due to dust deposition, cloud passages and high temperatures during this period. 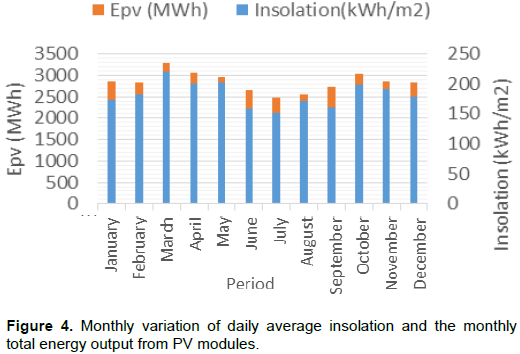 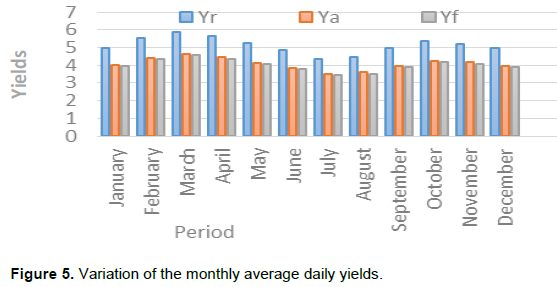 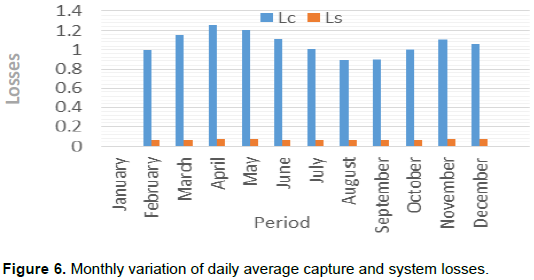 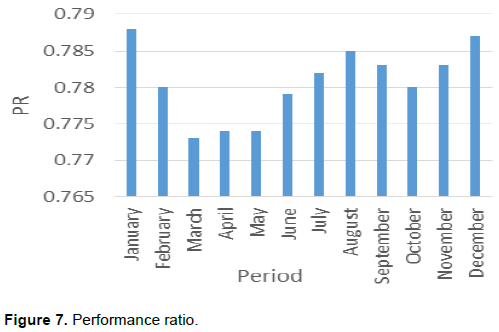 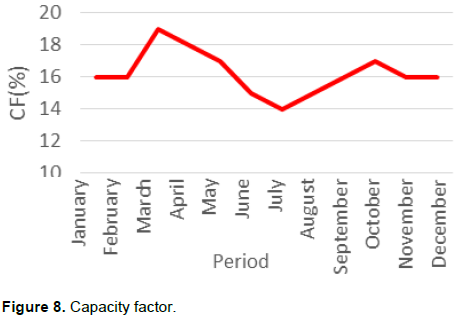 Comparison with PV system in other countries

This result is in line with expectations due to the high solar potential and the longer sunshine duration in Senegal.

In this paper, a PV system connected to the 23 MWp grid in Diass, Senegal was monitored throughout 2020 and its performance was evaluated daily. The annual average daily final yield, baseline yield and grid yield in this study was 4, 5.13 and 4.07 kWh/kWp/day, respectively. The total energy output of the PV modules was found to be 34161 MWh. The energy variation depends on the irradiance. The annual performance ratio and capacity factor are 78 and 16%, respectively. The result of this study is compared with other studies worldwide. The result shows that the system losses depend on the environmental conditions of the site installation.

The authors thank Mr. Bara NDIYAE from SENELEC for giving access to the PV plant data.