Conventional propagation methods of sweet potato (Ipomoea batatas L. var Kulfo) through stem cutting require large amount of propagules and large space for preparation. It has high risk of disease transmission to the next generation. In vitro propagation is the best alternative to overcome such limitations. This study was conducted to optimize protocol for in vitro propagation of Kulfo sweet potato variety using 6-benzylaminopurine (BAP) and indole-3-butyric acid (IBA) phytohormones for shoot multiplication and rooting, respectively. The result revealed that the highest shoot initiation (77.78%) and shoot length (4.40 cm) was observed in MS media supplemented with 0.5 mg/l BAP. Best shoot multiplication (5.33 shoots per explants) was obtained in MS medium supplemented with 1 mg/l BAP. MS medium supplemented with 0.5 mg/l IBA showed 100% rooting and average root length of 7.44 cm in vitro. In ex vitro conditions, 93.33% rooting was recorded. During acclimatization, 84 and 93% survival of in vitro and ex vitro rooted plantlets, respectively, were recorded. It could be concluded that MS media without BAP provides optimal condition for shoot initiation. MS supplemented with 1 mg/l BAP provides optimum condition for shoot multiplication. The ex vitro rooting could be better option to reduce in vitro rooting cost and for increased plantlet survival during acclimatization. Based on the result, 0.5 mg/l BAP for shoot initiation, 1 mg/l BAP of shoot multiplication and directly transferring to soil for rooting was recommended for micropropagation of Kulfo sweet potato variety. However, further studies will be needed in ex vitro root induction.

In developing countries, sweet potato is an important part of  food   security  packages  (Dagne  et  al.,  2014).  It  is mainly cultivated for its expanded edible roots which contain  high  carbohydrate,  minerals  and   vitamins  like vitamin A (beta carotene) and C to a large sector of the global population (Tumwegamire et al., 2011; Shonga et al., 2013).
Sweet potato is traditionally multiplied mainly by stem cuttings which are a slow process, and diseases may accumulate in the vine cuttings from generation to generation. This could result in declining of root yield and loss of superior genotypes. This method requires large area, incurs high cost and consumes time. Despite many efforts, the underlying problem in this procedure is low frequency of regeneration, long periods of culture and frequent media changes (Gosukonda et al., 1995).
Micropropagation of sweet potato offers  significant  advantages  in the production of large number of disease free clonal propagules within a short time, with  the possibility of eliminating viral, bacterial and  fungal  infection and the production of high quality and uniform plantlets (Neja,  2009; Tekalign et al., 2012). Kulfo variety is high yielding, orange fleshed sweet potato with high quality in terms of vitamins A and C (Laban et al., 2015). There is high demand of orange fleshed sweet potato in Ethiopia but shortage of planting material is a critical problem. Therefore, the aim of this study was to optimize protocol for rapid micropropagation of Kulfo sweet potato variety in in vitro condition using shoot tip culture.

Plant material
The study was conducted using orange fleshed sweet potato variety, Kulfo. This variety was obtained from Hawassa Agricultural Research Centre, Southern Nations Nationalities and Peoples’ Region, Ethiopia. Vine cuttings of about 25 cm long were planted and grown in greenhouse at the College of Agriculture and Veterinary Medicine, Jimma University, Jimma, Ethiopia. The mother plants were irrigated twice per day and allowed to grow for a month after which actively growing shoot tips were collected and used as source of explants.
Stock solution and medium preparation
MS media (Murashige and Skoog, 1962) supplemented with various plant growth regulators were used. Stock solutions of the macronutrients, micronutrients, vitamins, iron source and plant growth regulators (1 mg: 1 ml) were prepared and stored at +4°C in refrigerator for immediate use. For dissolving the plant growth regulators, drop of ethanol was used for IBA and drop of NaOH for cytokinins (BAP) before making up the final volume with distilled water. The dissolved solution was poured into labeled volumetric flask to be fully dissolved and finally stored in refrigerator for later use.
The culture medium containing 30 g/l sucrose was prepared from their respective stock solutions. The plant growth regulators (BAP and IBA) were added to the medium as required with various concentrations. The mixture was stirred using magnetic stirrer and the volume was adjusted using double distilled water. Then, pH was adjusted in all cases to 5.8 using 1 M NaOH or 1 M HCl. Finally, 8.0 g/l agar was added and heated to melt throughout the experiment. Before autoclaving, the media were dispensed into sterilized culture jars. The media were steam sterilized using autoclave at a temperature of 121°C with a pressure of 0.15 Kpa for 15 min and transferred to the culture room and stored under aseptic conditions for later use.
Sterilization and initiation of the cultures
Healthy vines shoot tip of Kulfo sweet potato variety was collected as explants. The explants were then washed with distilled water and sterilized by dipping in 70% ethanol for 1min in a sterilized jar and washed using sterile distilled water three times for 5 min. They were then sterilized with 1% (v/v) commercial bleach (NaOCl) solution containing 3–4 drops of Tween-20 for 15 min and rinsed 4 times with sterile double distilled water each for 5 min with gentle shaking to remove the chemical residue. The damaged parts were excised off using a sterile scalpel and about 1 cm long explants were cultured into the nutrient media. The cultures were maintained at room temperature in the growth room with white florescent lamps of 16/8h light and dark photoperiod, respectively.
Effect of different concentration of BAP on shoot initiation
The sterilized explants were cultured on basal MS medium supplemented with various concentrations of BAP (0, 0.5, 1.0, 1.5, and 2.0 mg/l). The experiment was laid down in completely randomized design in factorial with three replications with five shoot tips per jar. After 3 weeks, percent shoot initiation and shoot length were recorded.
Effect of different concentrations of BAP on shoot multiplication
For shoot multiplication experiment, the initiated shoots were taken and cultured on hormone free MS medium for two weeks to avoid carry over effects in the next experinment. MS medium supplemented with different concentrations of BAP (0.0, 0.5, 1.0, 1.5, 2.0, 2.5 and 3.0 mg/l) were used for shoot multiplication. The experiment was arranged in completely randomized design with three replications with five shoots per jar. The cultures were placed in white florescent light room adjusted at 16/8 h light/dark at room temperature. Shoot number, shoot length and leave number were recorded after 5 weeks of culturing.
Effect of IBA for root formation
For in vitro rooting experiment, well developed shoots were cultured on hormone free MS medium for avoiding carry over effect. The shoots were transferred to half strength MS medium supplemented with 0.0, 0.1, 0.5, 0.75 and 1.0 mg/l IBA. The experiment was laid down as completely randomized design (CRD) with three replications with five shoots per jar were used. For ex vitro rooting experiment, 15 shoots were directly transferred to greenhouse from shoot multiplication media by carefully excising in vitro multiplied micro-shoots for rooting and hardening, simultaneously. After a month, number of roots, root length and percentage of rooted plantlets were recorded for both in vitro and ex vitro treatments.
Acclimatization
Plantlets with well-developed root and leaves were washed with tap water to remove adhering media and sucrose attached on the roots of plantlets. Fifteen plantlets were transferred to plastic pots in greenhouse containing hardening medium composed of soil, compost and sand (1:1:2) ratio, respectively. The plants were placed in pots covered with  transparent  plastic  bags  and irrigated using sprayer every day. Plastic cover were removed partially after a week and completely removed after two weeks. Finally, after 30 days, the survival rates of the plantlets were evaluated by counting the number of successfully acclimatized plantlets.
Data analysis
SAS software v9.2 (SAS Institute, 2008) was used for data analysis of variance and significance difference between treatments. Means separation was done with least significance difference (LSD) at 0.01 probability level.

Shoot induction
MS medium supplemented with 0.5 mg/l BAP showed the maximum initiated shoots (77.78±0.23) and shoot length (4.40±0.11 cm) per explants (Figure 1).
A decrease in percent shoot initiation was observed for increasing BAP concentrations from 0.5 to 2 mg/l. Low concentrations of BAP were effective in rapid shoot initiation due to activation of cellular process. High concentrations (2 mg/l) of BAP resulted to significantly lower shoot initiation due to the inhibitory effect on metabolism and shoot elongation. This is due to high concentration of BAP that leads to metabolic inhibition. Gosukonda et al. (1995) found that different sweet potato varieties respond differently to in vitro shoot initiation media. However, in many cases higher concentrations of BAP were found to inhibit shoot elongation (George et al., 2008). The result was also in conformity with the finding of Sowal et al. (2002) who reported the effectiveness of low concentration of BAP to result in rapid shoot initiation due to the activation of tRNA cytokinins resulting in rapid proliferation  of   shoot   primordial.   In   a   similar  study, Khadiga et al. (2009) also reported that BAP at the concentration of 5 mg/l gives low number of regenerated shoots of sweet potato.
Effects of BAP on shoot multiplication
Maximum shoots per explant (5.33 ±0.34) and shoot length (7.82 ±0.02 cm) were observed on MS media supplemented with 1.0 mg/l BAP (Table 1 and Figure 2). Minimum shoots number (1.00 ±0.00), shoot length (2.11±0.12 cm) and leaves number (2.78 ±0.19) were observed on MS media supplemented with the highest concentration of BAP (3.0 mg/l). At concentration of BAP below 1 mg/l, mean number of shoots and shoot length show significant difference while the leaf number did not show significant difference in their means. Consistent with the earlier report that the number of shoots, shoot length and leave number starts declining as the concentration of BAP increased from 0.5-3.0 mg/l. It was noticed that at the BAP concentrations higher than 2.5 mg/l, shoots showed bushy feature and distorted growth due to inhibitory effect on shoot elongation and multiplication. In related studies, decline in shoot number, shoot length and leave number was reported on Awassa-83, Beletech, Adu and Barkumie and other sweet potato genotypes (Addis, 2013, Neja, 2009; Geleta and Tileye, 2011). 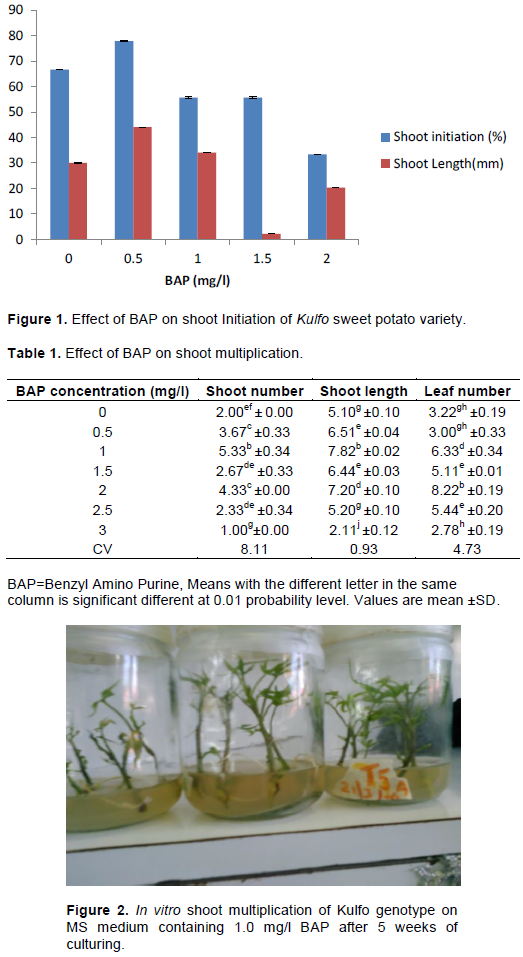 Among BAP concentrations used for shoot initiation, 0.5 mg/l BAP was found to be the optimum concentration. The effects of BAP concentrations on shoot multiplications were also highly significant. The maximum shoot/explant (5.33 ±0.00) and shoot length (7.82±0.02 cm) were observed on MS medium supplemented with 1.0 mg/l BAP. For in vitro rooting, half strength MS medium with 0.5 mg/l IBA showed the highest value for percentages of rooting and number of root/shoot.
Although, statically no significant difference was observed among 0.5 mg/l BAP and ex vitro rooting, but higher root length response were recorded at ex vitro rooted plantlets. About 84% of the in vitro rooted plantlets were acclimatized successfully, whereas, 93% of the ex vitro rooted plantlets survived and acclimatized successfully. Therefore, 0.5 mg/l BAP for shoot initiation, 1 mg/l BAP of shoot multiplication and directly transferring to soil for rooting was recommended for micropropagation of Kulfo sweet potato variety.

The authors have declared no conflict of interests.

The authors are very grateful to the Gesha Educational Office for financial support provided to Beyene B and the Department of Plant Science and Horticulture, Jimma University for providing plant tissue culture laboratory facility. Hawassa Agricultural Research Centre is also acknowledged for providing us the sweet potato samples.